WALKING ACROSS THE BROOKLYN BRIDGE

The Brooklyn Bridge, which crosses the East River and connects Brooklyn to Manhattan Island, is one of New York's most iconic landmarks. It is even an integral part of New York's history. So if you are visiting the Big Apple, it is impossible not to add to your programme the crossing of the most famous, the most beautiful and the oldest bridge in the city. Especially since the crossing of this mythical bridge is totally free!

So if you come to visit New York, don't miss the Brooklyn Bridge. All the info in this article 😊

What do I particularly love? The breathtaking views of the New York skyline. Who could resist?

If you want to know more about the Brooklyn Bridge and its history, read on. You'll also get a lot of tips and tricks to make the most of your walk on one of the oldest suspension bridges in the US.

A LITTLE HISTORY OF THE BROOKLYN BRIDGE

In the past, Manhattan and Brooklyn were two distinct cities separated by the East River (Brooklyn was only incorporated into New York at the end of the 19th century). To cross from one bank to the other, you had to take a ferry: it took some time (460 m to cross) and you had to pay!

During the winter season, the crossing was even more complicated whenever the river froze.

Following a major demographic boom, a better solution had to be found to facilitate the movement of people and goods. A law was therefore passed for the construction of a bridge that would link the two districts.

A first project was proposed in 1857, but it was rejected. A second proposal was made in 1860, but it was not until 1867 that engineer John Augustus Roebling's plans were accepted.

This German-born architect had already designed smaller suspension bridges in Waco, Texas and Cincinnati, Ohio. This time, he was going to build the first suspension bridge made of steel wire – which he had a hard time making people accept the idea of wire ropes – and the longest suspension bridge in the world. Unfortunately, he never got to see the bridge’s completion: following an accident on the building site, he died of tetanus two years after construction began.

His son, Washington Roebling, continued the work, but he too suffered an accident that left him severely disabled. He was then assisted by his wife, Emily Warren Roebling. She would go back and forth to the construction site while he observed the work’s progress from his flat, with binoculars.

The construction of the bridge, which began in 1869, was completed 14 years later. The bridge was inaugurated with great fanfare on 24 May 1883 (even President Chester A. Arthur was present for the occasion). Washington Roebling's wife was the first person to cross it. On that day, 1800 vehicles and 150,300 people used it. But the idea that this bridge might collapse never left people.

To ensure that the bridge was solid, a trainer from Barnum Circus demonstrated its reliability by parading 21 elephants from his menagerie across it (this also served as a huge publicity stunt!).

If you'd like to get information from a local guide while exploring the bridge, you can! 😉 Go on a 2 hours-long guided tour next to the bridge to discover its surroundings and, of course, to cross it and go to the trendy Dumbo district.
FOR MORE INFORMATION ON THE GUIDED TOUR, CLICK HERE 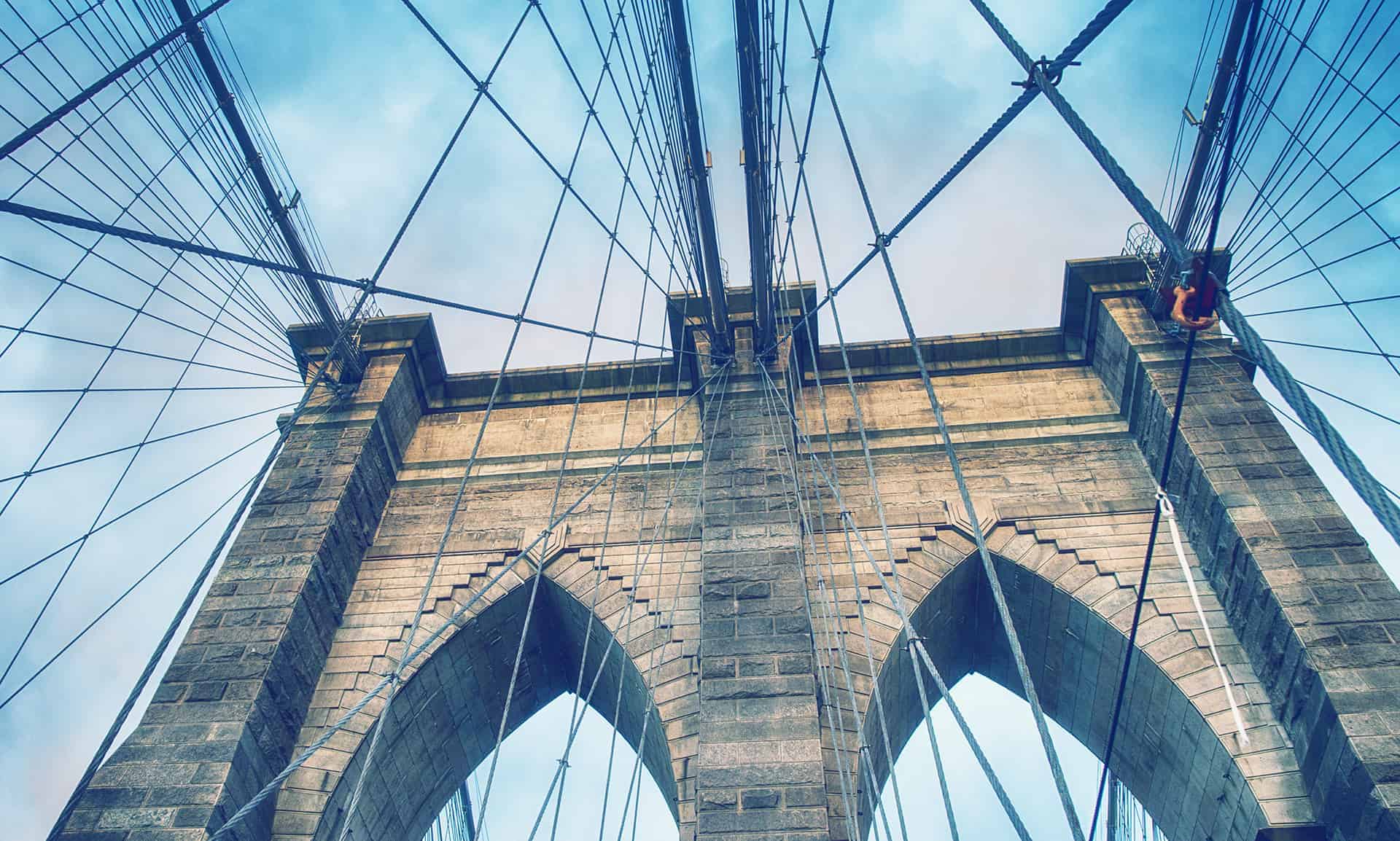 Brooklyn Bridge: SOME FIGURES TO KNOW

SOME INFORMATION AND ANECDOTES TO KNOW 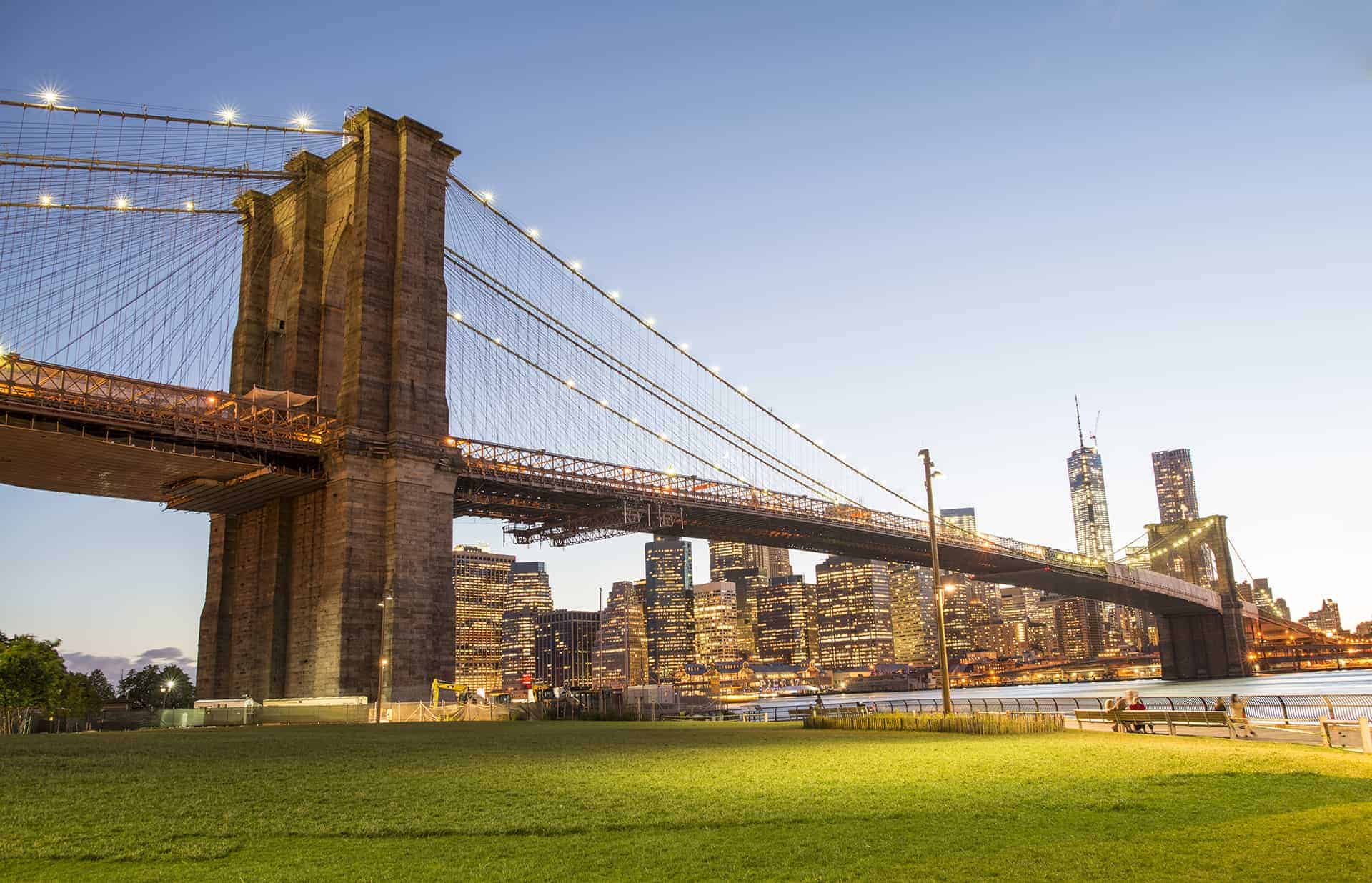 HOW TO GET TO THE BROOKLYN BRIDGE?

The best way to get to the Brooklyn Bridge is to take the underground. Several lines lead to it.

From Manhattan, take the: 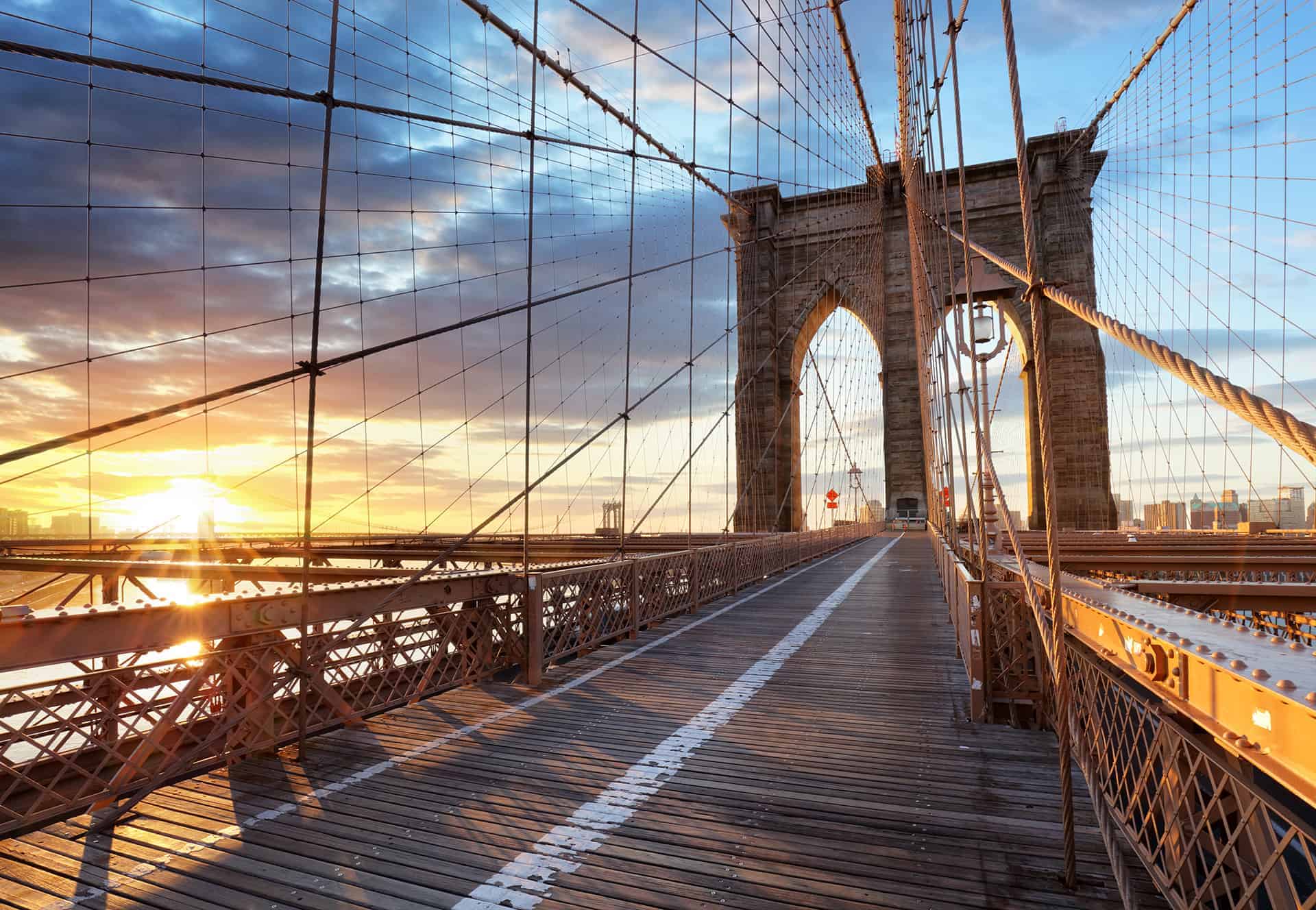 You can’t miss the bridge’s entrance: it's right in the middle of the intersection of Tillary Street and Adams Street.

How IS THE VIEW FROM THE BROOKLYN BRIDGE?

From the Brooklyn Bridge, you will have a breathtaking view of the Manhattan Skyline and of the East River (it's one of the best places to see the river!). You will also be able to contemplate:

So don't forget your camera!

WHEN IS THE BEST TIME TO CROSS THE BROOKLYN BRIDGE? 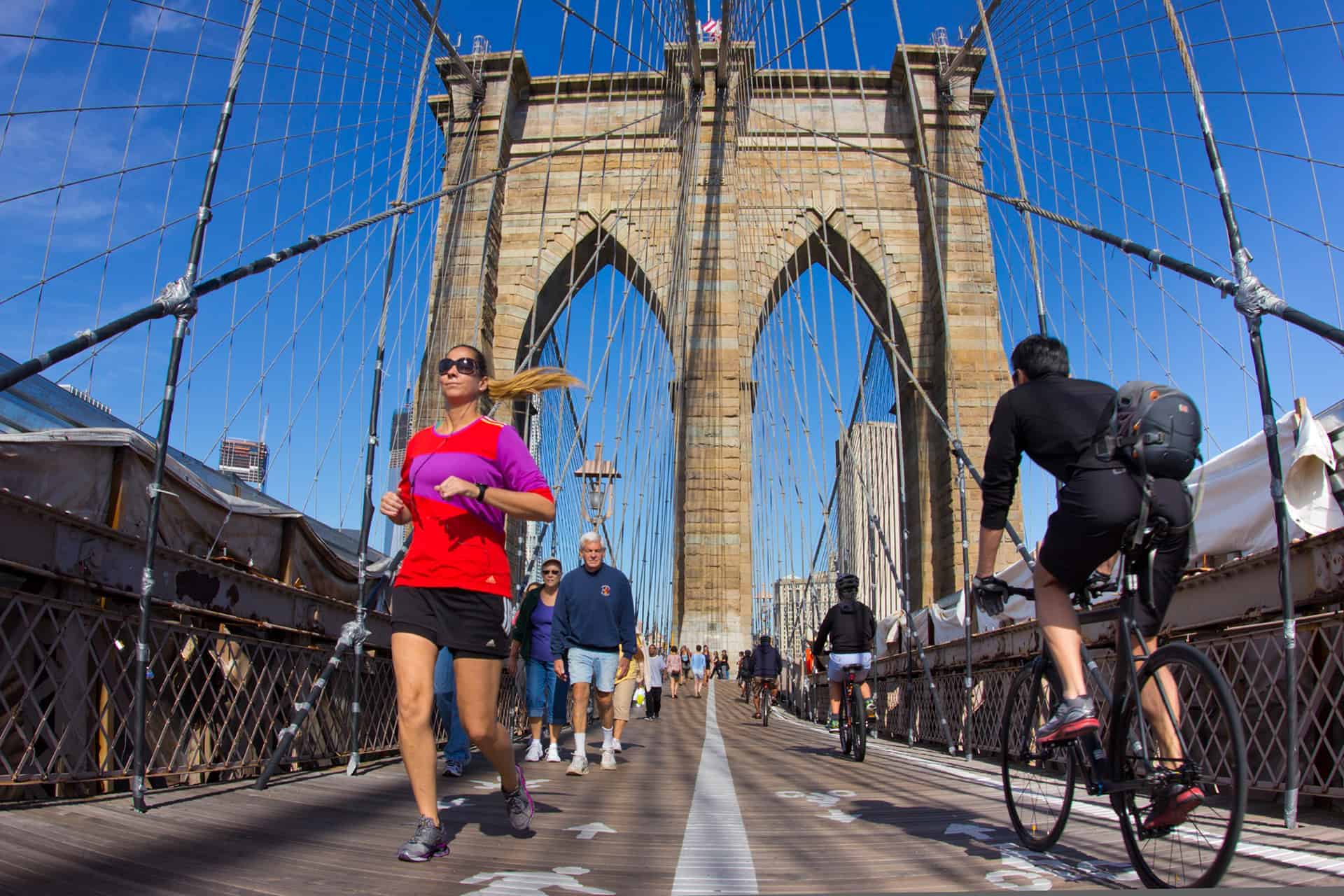 You can walk across the bridge whenever you want. Day, night, morning or evening, the bridge is accessible at any time. And there is no ideal time!

However, I would recommend crossing it once during the day and once at night (if you have the time). That way you can take pictures of the bridge in two different atmospheres.

At dawn, you will have the advantage of seeing fewer people. You can cross the bridge in peace and enjoy your walk to the fullest. There will be no one to bother you as you take a thousand photos of the sunrise over the Manhattan skyline!

At sunset, the sky often takes on an orange hue, a sight you don't want to miss!

Moreover, to see New York illuminated from this bridge is a pleasant experience.

Alternatively, you can go in the late afternoon. You will be able to take both day and night shots.

THE BROOKLYN BRIDGE IS MAINLY VISITED ON FOOT

You can of course cross the bridge by car, bike or rollerblades, but a walk is the best way to see the structure’s beauty. It also gives you time to admire the view of the East River and Manhattan.

For a one-way trip, expect 30 to 40 minutes of walking (the bridge is almost 2 km long!). But it will mainly depend on your pace and the breaks you will take.

Make sure you stay on the pedestrian path! Don't get in the way of cyclists (they tend to get annoyed fast)! If you want to cross the bridge by bike, you can of course rent one, but make sure to stay in the middle lane.

If you have small children, bring a pushchair, as they will get tired quickly (also remember to take snacks with you – and don’t forget a pee break before you start!).

Note that if you cross the bridge towards Manhattan, you will see that there is a slight downward slope, so the walk will be less tiring.

²&You can also opt for a two-hour guided tour of the bridge. The guide will give you a lot of information about it 😊

There are also guided tours that you can do by bike. The advantage is that you will go faster and you will be able to cover a greater distance (and therefore see more things)! More information can be found here.

During your walk, don't forget to:

You've reached the end of this article on the Brooklyn Bridge. I hope it helped you and that you enjoyed it! 😊