CHICAGO: THE MUSICAL ON BROADWAY

Inspired by true events and adapted from a 1926 play, the musical Chicago is one of Broadway's most popular shows. For almost 50 years, this show has been a success in New York and around the world.

In this post, I propose to learn more about the history of this iconic show. You will also find all the information you need to book your tickets before you leave, so as to save time and money, and attend a performance of Chicago on Broadway in the best conditions.

The history of the musical

The story of this musical takes place, as its name indicates, in the city of Chicago. It is based on a true story that took place in the 1920s. Roxie Hart, a young chorus girl and cabaret dancer, finds herself in prison for the murder of her lover. There she meets Velma Kelly, who is none other than her lifelong idol, a great jazz singer, also imprisoned for murder. With the help of her lawyer Billy Flynn, Roxie will eventually succeed in getting out of prison, and thanks to the media coverage of her trial, would go on to become a huge show business star.

It is one of the most popular Broadway musicals. Of course, the other great Broadway classics are "The Lion King", the musical "Aladdin" and also "Stomp".

Performances are held almost daily, but the closer you get to the date of a show, the more likely it is that tickets are sold out (they sell out 1 to 2 weeks before the show itself!). Therefore, the sooner you get your tickets, the sooner you'll be sure to attend the performance you want 😉

TO SEE THE DATES OF THE PERFORMANCES, CLICK HERE 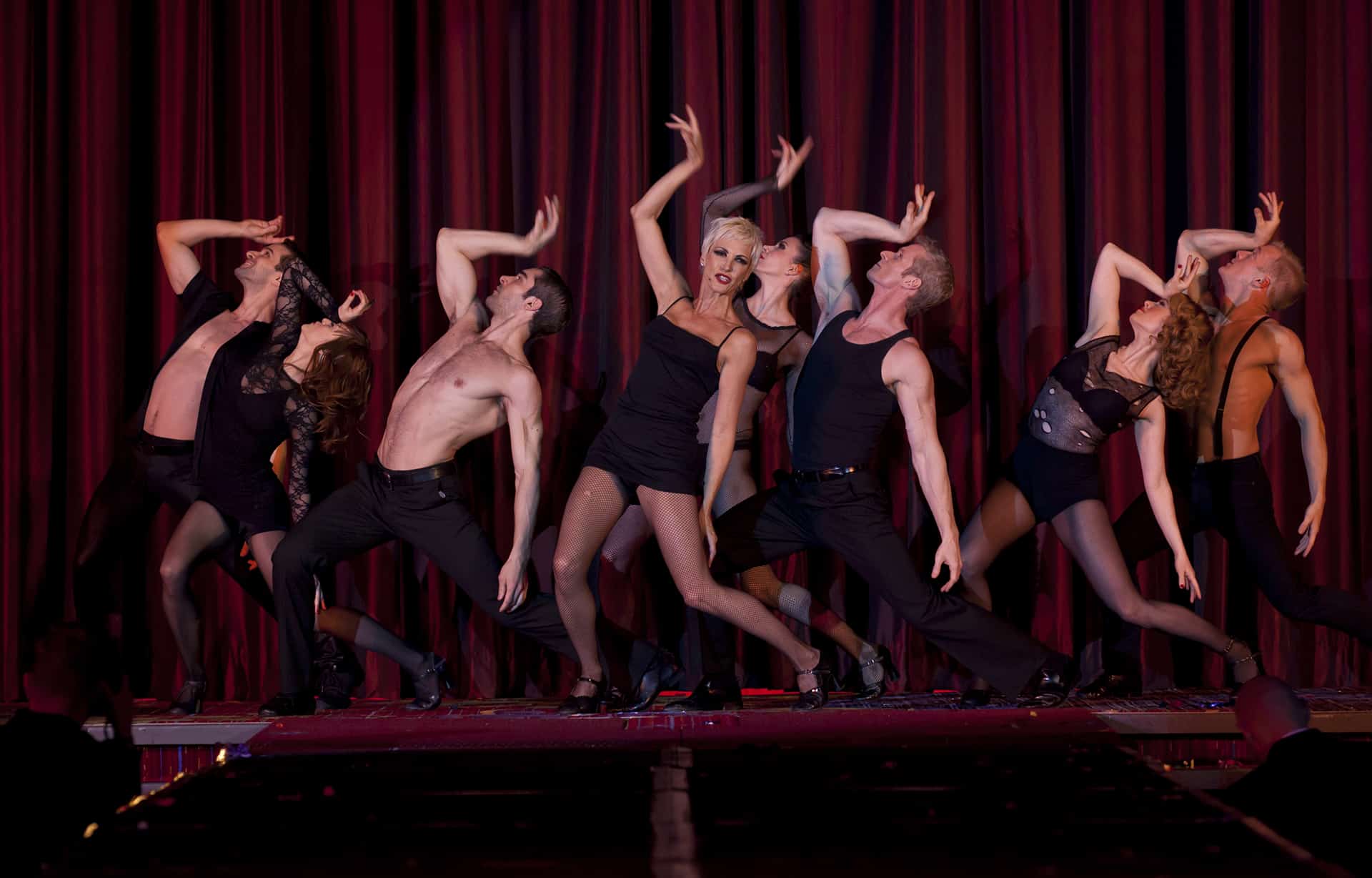 This musical premiered on 3 June 1975, at Broadway's 46th Street Theatre. The show quickly became very popular and the following year, it received the Drama Desk Awards for Best Lighting Design and was nominated in 10 categories at the Tony Awards.

Over the years, Chicago has been honoured with 5 Drama Desk Awards, 6 Tony Awards, 1 Grammy Award and a myriad of other awards.

Since then, Chicago has been performed around the world in English, but also in French, German, Swedish, Spanish, Russian, Portuguese, Italian and Dutch. Many celebrities have played characters in the show, including Denise Van Outen, Jimmy Osmond, George Hamilton, Lynda Carter and Patrick Swayze.

The success of the musical Chicago is not entirely due to chance. Many of the creators who worked on the show’s production had already worked on other films and musicals that have become cult. Bob Fosse, already renowned for his work on popular films such as "Cabaret", showed here one of his most powerful choreographies. John Kander and Fred Ebb, who also worked on Cabaret as well as on other huge hits such as Frank Sinatra's "New York, New York", wrote the music and lyrics.

With its resolutely modern subject and its rather irreverent tone, the show immediately found its audience, and it quickly became a great Broadway classic. Among the twenty or so songs that are present in this musical, several titles have become huge hits, such as "All That Jazz", "Nowadays", "Razzle Dazzle" or "Mr Cellophane".

In total, this grandiose show lasts 2 hours and 20 minutes and features 23 artists on stage. All the music is performed live by a jazz orchestra. Lights, costumes, choreography, scenery... Everything is done to allow the spectators to escape the time of the whole performance. The subjects tackled being sometimes rather difficult, the show is rather addressed to the adults and teenagers of 13 years and more.

The best seats at the Ambassador Theatre in Broadway 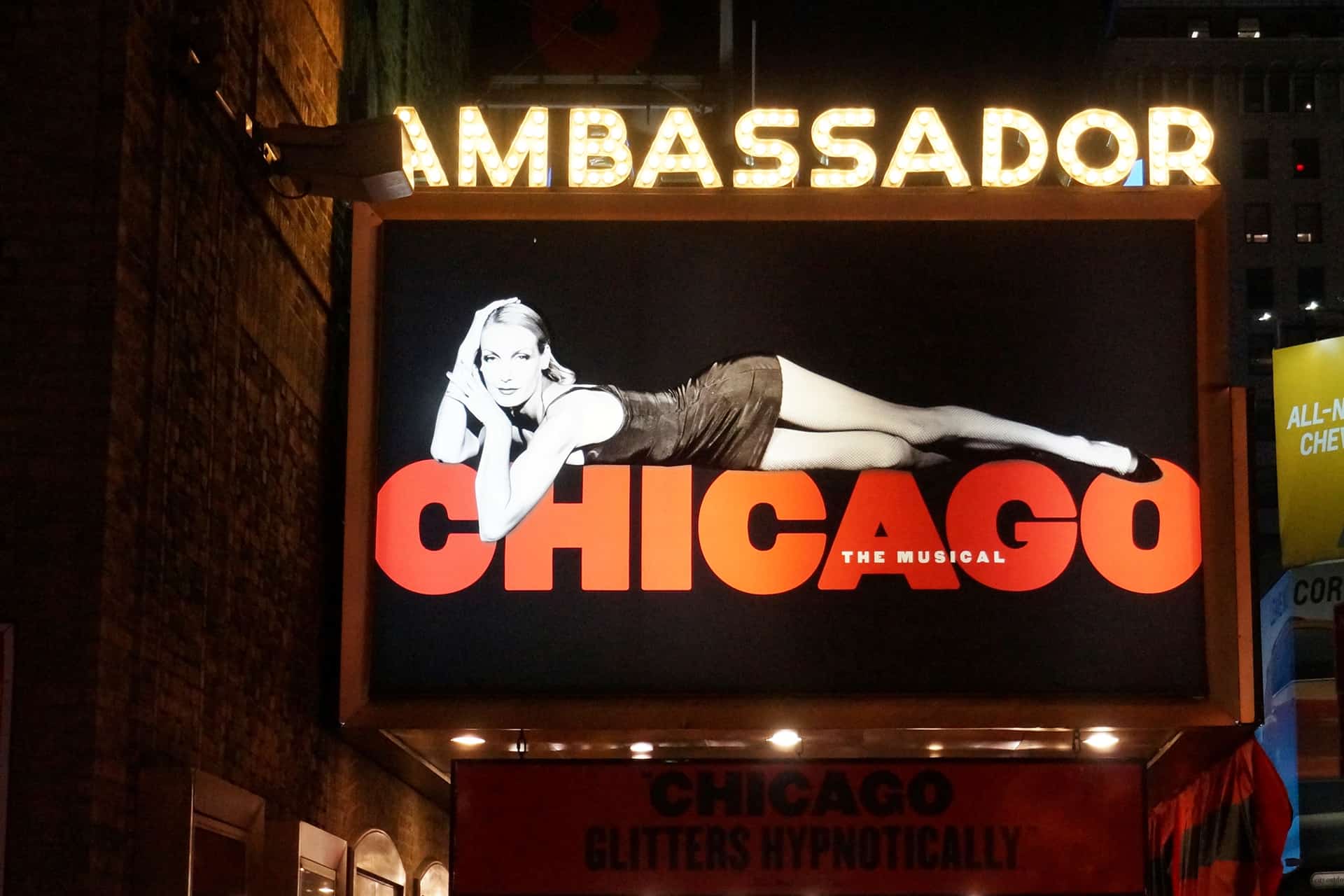 Built in 1921, the Ambassador Theatre is a very famous New York City theatre. It's a small venue, but remarkably well-designed and can accommodate about 1,100 spectators. The seats are quite narrow, so you won't be able to really get cosy, but you'll still be pretty comfortable while enjoying the show.

You can choose between seats on the mezzanine or on the orchestra level. In this theatre, there is a very good view from any location, with the exception of a few seats on the Rear Mezzanine, where visibility may be impeded by a security barrier.

Seating rates are not the same for all locations, and the best seats are probably the ones at the front of the mezzanine.

Ticket prices for the musical Chicago in New York

If you have purchased between 2 and 4 tickets, you will always be placed next to each other, but this may not always be the case for larger groups.

The prices for this successful musical are quite high:

SEE THE AVAILABLE TICKETS FOR YOUR DATES BY CLICKING HERE

Book your Tickets to see Chicago on Broadway

The Ambassador Theatre is not the biggest venue on Broadway, and even though this show is decades old, it still attracts a lot of people. So I strongly advise you to buy your tickets online, if you don't want to risk missing the show. You can reserve your seat several months in advance, which will often save you some money.

Unlike other shows, you won't be able to try your luck at the ticket lottery to get a seat to see Chicago. You may be able to find Chicago tickets at TKTS booths , which are located in several locations in New York City, including Times Square.

These stands only offer unsold tickets to shows that are happening that night or the next day. The odds of finding tickets for a show as popular as Chicago are therefore quite low, but these stores can still help you find cheap tickets to many musicals in New York.