Newark Airport: transfer + how to get to the centre

You're landing at Newark Airport? But you don't know yet how to get to downtown New York?

No worries, I will explain everything you need to know in this article!

Where is Newark Airport?

Newark Airport is 6 km from Newark – the largest city in the state of New Jersey (western suburbs of New York) – and about 25 km from Manhattan.

Its exact address is: 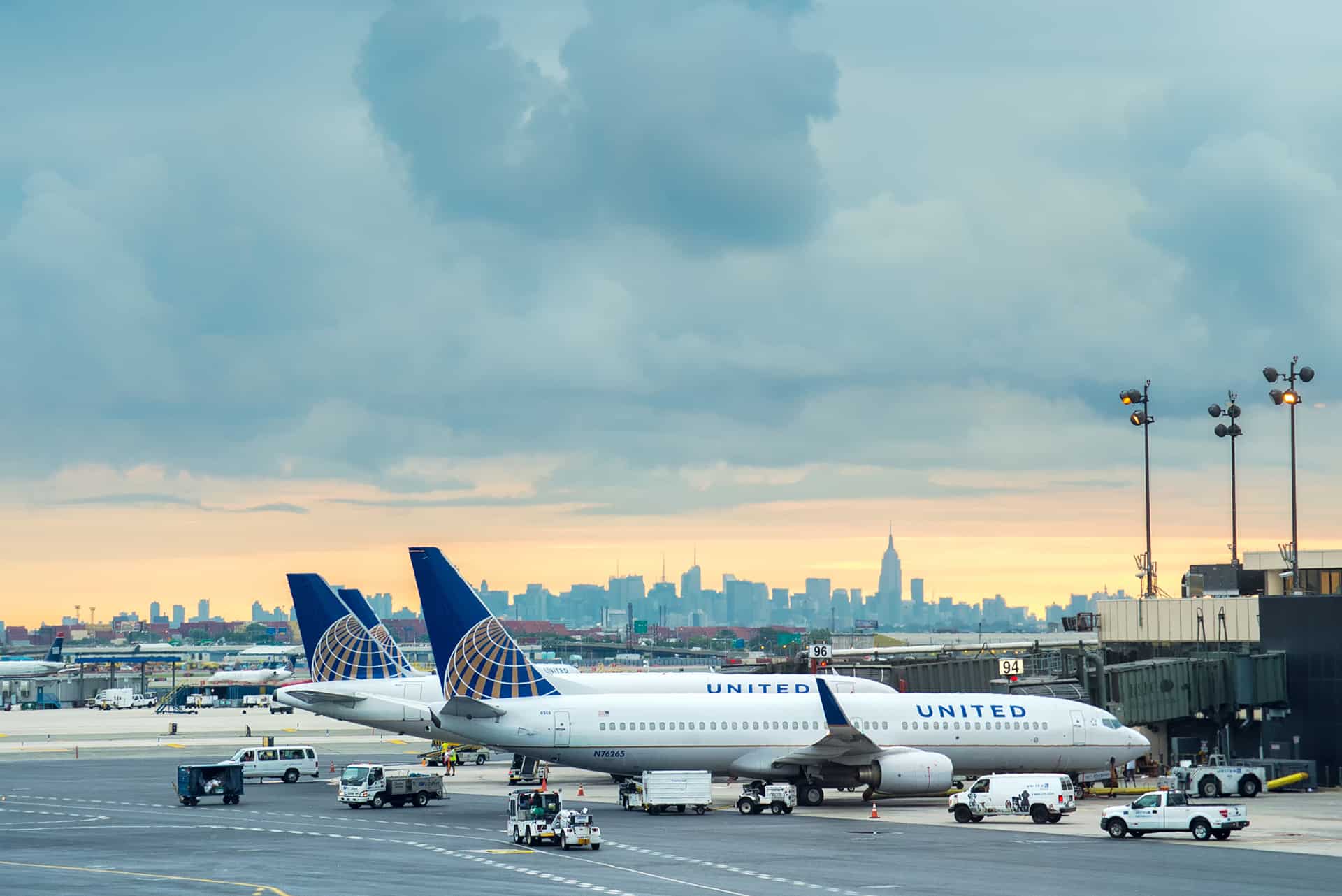 From Newark Airport, there are several ways to get to New York.

The airport is in fact very well served by public transport. In addition to buses and shuttle buses, the airport has its own train station. There are regular and direct train connections from the airport to New Jersey and New York.

You can also take a taxi or consider renting a car. In the latter case, you can simply take the "New Jersey Turnpike".

I personally recommend this solution only if you are with other people (4 people, for example) because the yellow cab transfer from Newark airport is quite expensive.

It takes about 40 minutes by taxi to reach your hotel from the airport (depending on which New York borough you will be staying in).

You will have two options: you can either take a yellow cab or order a private taxi. 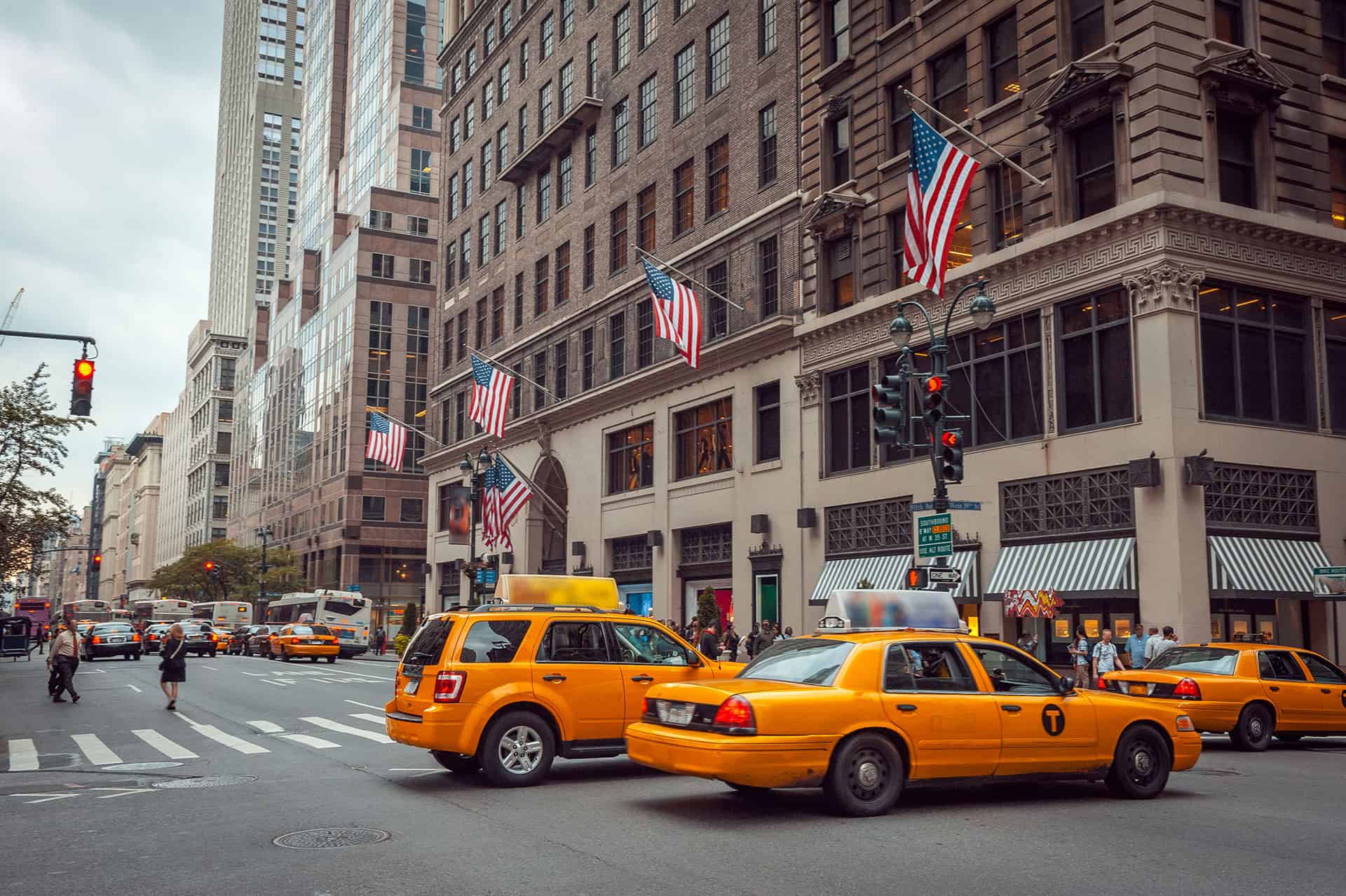 You'll find plenty of them right outside the airport – but make sure it's a real taxi, by looking at the licence on the bonnet. This will save you unpleasant surprises when  the time to pay comes !

The yellow cab is a quick way to get to your hotel (as I said before, it will take you about 40 minutes), but it is quite expensive, especially if you are travelling alone.  If you can, share your ride with someone.

As you leave the airport, you can ask if anyone is going to the same area as you, for example.

You must of course take tolls prices into account, and you should also consider tipping.

There are a number of taxi companies operating out of the airport terminals, in the "Pick Up Area": Newark Airport Taxi, Dial 7, All State, Gold Lincoln Taxi Service, Camel Car or even Newark Airport City Taxi.

You will have two choices for payment: you can pay the driver in cash, which is the classic option. But to make life easier, I recommend option 2: book your taxi before leaving for New York – you will then pay by credit card.

By booking online, you can also choose the type of vehicle you want (sedan, van, SUV or even a limousine, if you think big!), but above all: your taxi will be there waiting as soon as you arrive (a sign with your name will be placed on the taxi). No stress whatsoever with this means of transfer!

They depend on the destination and do not include taxes, tolls and tips.

They also vary according to the traffic and the pick-up time.

Another means of transportation, much similar to a private taxi, is a private transfer. You can book one for when you arrive at the airport, or for when it is time to go back to the airport. This option is especially interesting if you travel as a group or a family. The driver will take you to the city centre, or to the airport for your return. You will just need to provide your flight and accommodation details and the company will arrange this for you.

TO FIND OUT MORE ABOUT THE PRIVATE TRANSFER, CLICK HERE 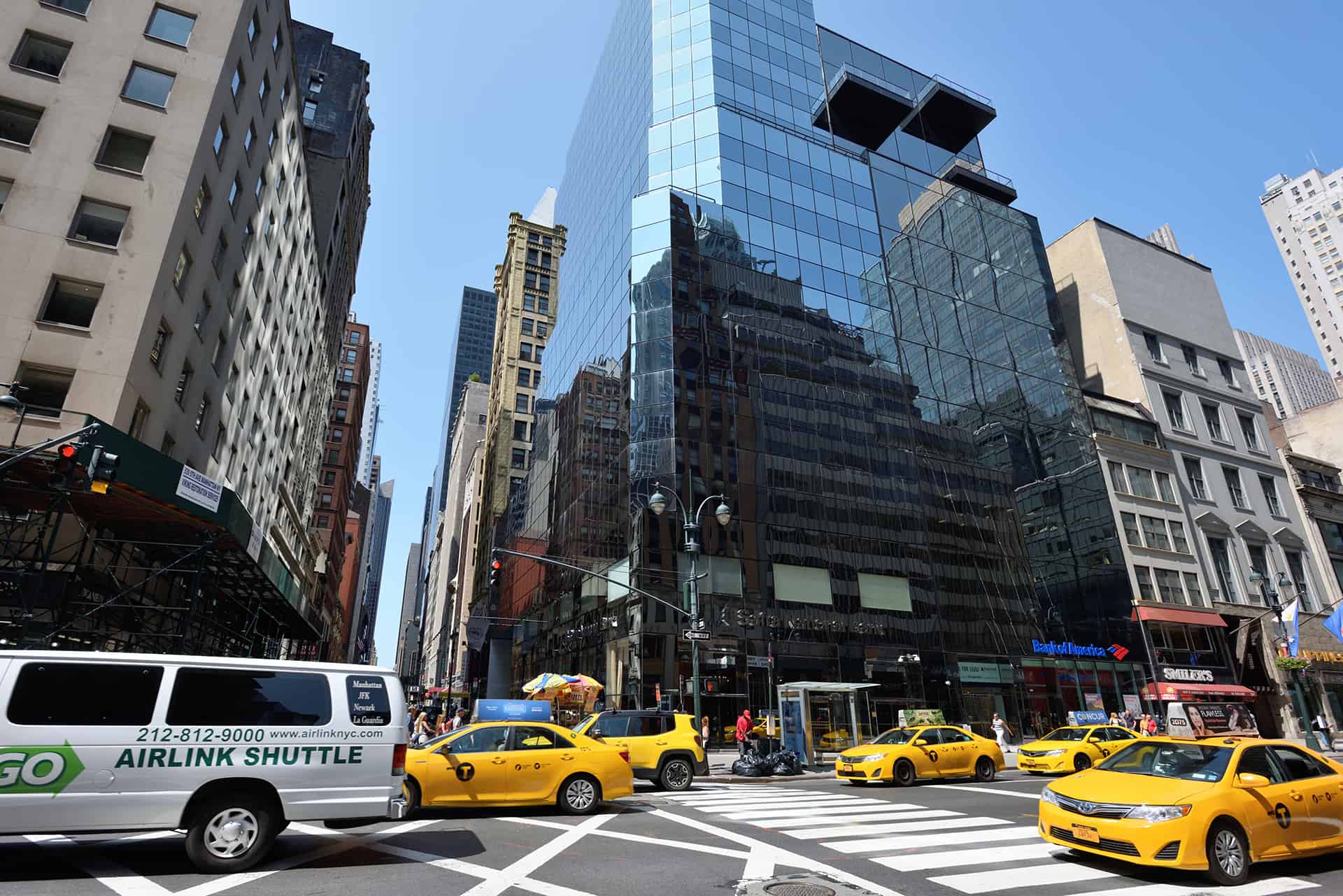 Before leaving for New York, you can book one of the shuttles that transfer to New York from Newark Airport.

These vans will take you directly to your hotel (with other travellers: 8 – 10 people per shuttle).

This method takes longer than a taxi because the shuttle goes door-to-door. If you are the first one on the list, you will have a 40-minute ride. If not, just enjoy the various views of New York City along the way!

This is the most convenient way to travel, as you will be dropped off at your hotel (or in front of your accommodation) and you won't have to carry your luggage! This is the best value for money option!

I have only taken the bus from Newark airport once.

There are many bus routes to the airport, including city buses (which is great if you have a hotel reservation in New Jersey). Otherwise, I recommend the Newark Airport Express.

This shuttle will take you to Manhattan, but beware – only 3 stations are served:

This bus service is available every day of the week, 24 hours a day (buses run approximately every half hour). There are stops at each terminal. Head for the following locations:

If you have chosen accommodation close to one of the stops served by these buses, this will be very convenient.

On the other hand, if you are staying further away, you will have to then take a second means of transport, such as a taxi or the underground... which will not be convenient if you have suitcases to carry, especially as your day will have been long!

However, this mode of transport is rather economical.

This means of transport, the Airtrain, has existed since 1996. It is a kind of shuttle/subway that connects the terminals to each other (in 7 minutes), but also connects Newark Airport to the airport train station ("Newark Liberty International Airport" station).

From there you can take the train (NJ Transit) to New York City, which will take you to "New York Penn" Station (in Midtown).

There, you can take connections (with PATH) to Manhattan (towards 33rd Street or the World Trade Center). Alternatively, you can take the underground to the station nearest your accommodation.

The Newark Airtrain is the most economical way to transfer to New York.

It has two disadvantages:

Warning: You will not be able to use the famous Metrocard which allows you to take the underground, not even the "Unlimited Ride 7-days Metrocard" which gives you unlimited travel for 7 days: they are not usable in New Jersey!

Taking a Uber from Newark Airport

If you don't know about UBER yet, it is a mobile application (so you will need to have internet on your phone), through which you can order a car to pick you up at the airport. The driver will drop you off wherever you want.

Rates are inclusive of VAT and include tips and tolls.

Newark Liberty International Airport (formerly "New York Metropolitan Airport") was built on about 2 hectares, or 5 acres of riverfront land (next to the Passaic River). It opened on 1 October 1928 and was New York's first major airport.

During World War II, like many other airports, it was occupied by the US Air Force. German planes that were captured were landed there. Then freight and passenger traffic resumed from 1946 onwards.

In the 1980s, the airport began to handle international flights. The first destination was London in 1984. Others soon followed, not only in Europe, but also in Asia and around the world. Among the most popular destinations are Paris, Beijing, Shanghai, Delhi and Frankfurt.

Some information to know

What will you find at Newark Airport? 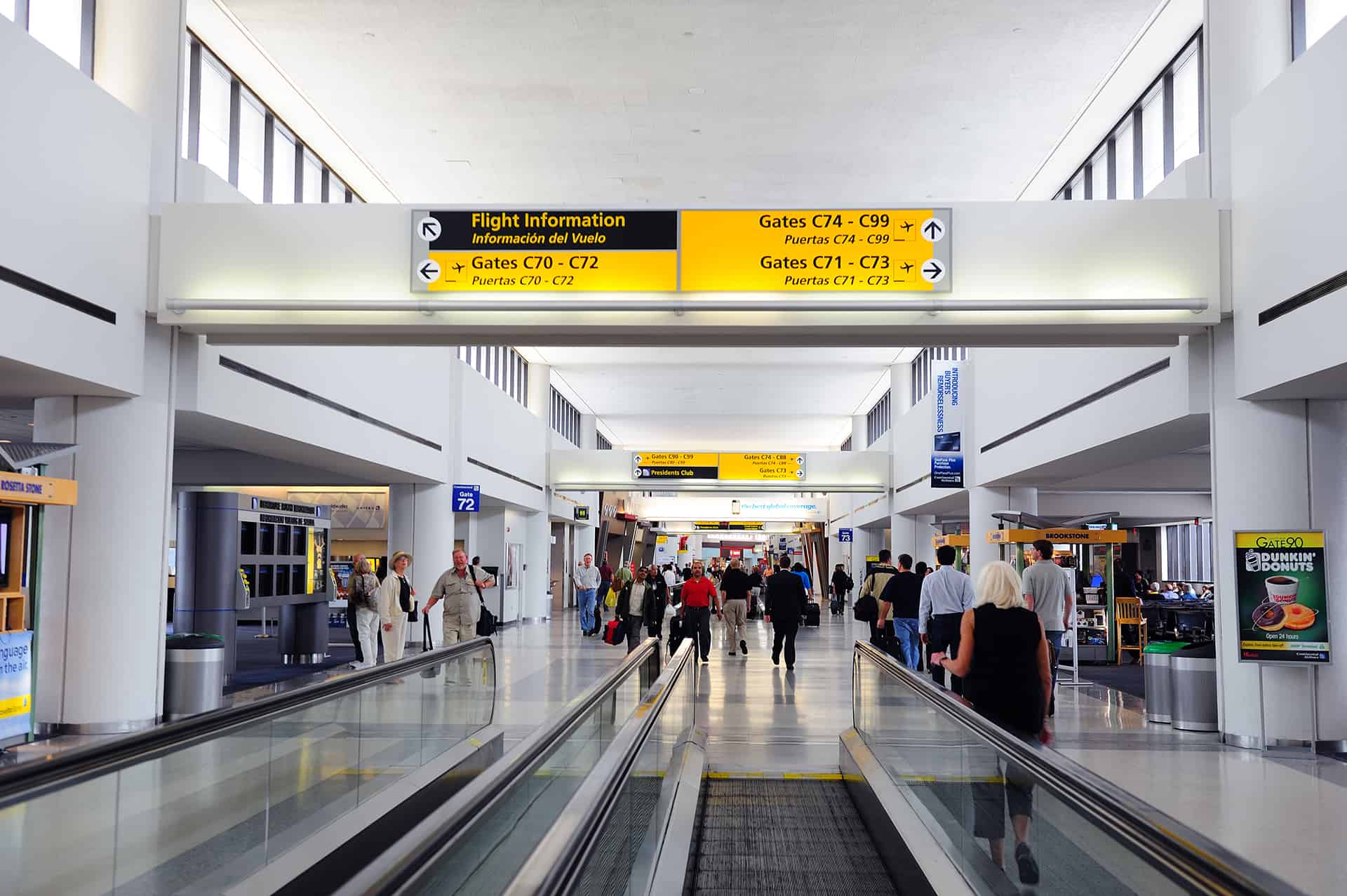 The Newark Airport now occupies an area of almost 28 hectares. It has:

Each terminal has its own underground car park (accessible for a fee). The terminals are linked by a free Aerotrain/monorail, the Newark Airtrain. This airtrain also provides a link to the airport station.

The airport also has many shops, cafes and restaurants offering both American and foreign cuisine (Mediterranean, Mexican, Italian, etc.). You will also find fast food restaurants such as Starbucks, Ben & Jerry's...

How much to park in the Airport Car Parks?

Parking at the airport is easy. Prices depend on the length of time you park: short term, long term (daily), economy and valet.

Shuttles run between the car parks and the terminals every 10 minutes.

You can book your parking place online before you leave for New York. Visit the Newark Airport's official website and select your parking dates and times in advance.

Where to sleep near the airport?

The airport has its own hotel: the Newark Liberty International Airport Marriott.

It offers comfortable rooms from $117 / £88 per night (with 1 king-size bed or 2 double beds) as well as a gym, restaurant and bar. You can get there by free shuttle.

Alternatively, there are other hotels located around Newark, such as the “Holiday Inn Newark International Airport” or the “Best Western Plus Newark Airport West”.
SEE THE AVAILABLE HOTELS FOR YOUR DATES BY CLICKING HERE

What are this airport's advantages?

And that’s it for my article on the Newark Airport. Hope it was useful! 🙂