All the info about Grand Central Terminal

Have you ever heard of Grand Central Terminal?

If you're planning a trip to New York City, Grand Central Terminal is a must-see – even if you don't have a train to catch. Much more than just a station, it is actually the train station with the largest number of platforms in the world, as well as a true museum and shopping mall. I explain it all in this article 🙂

The history of Grand Central Terminal 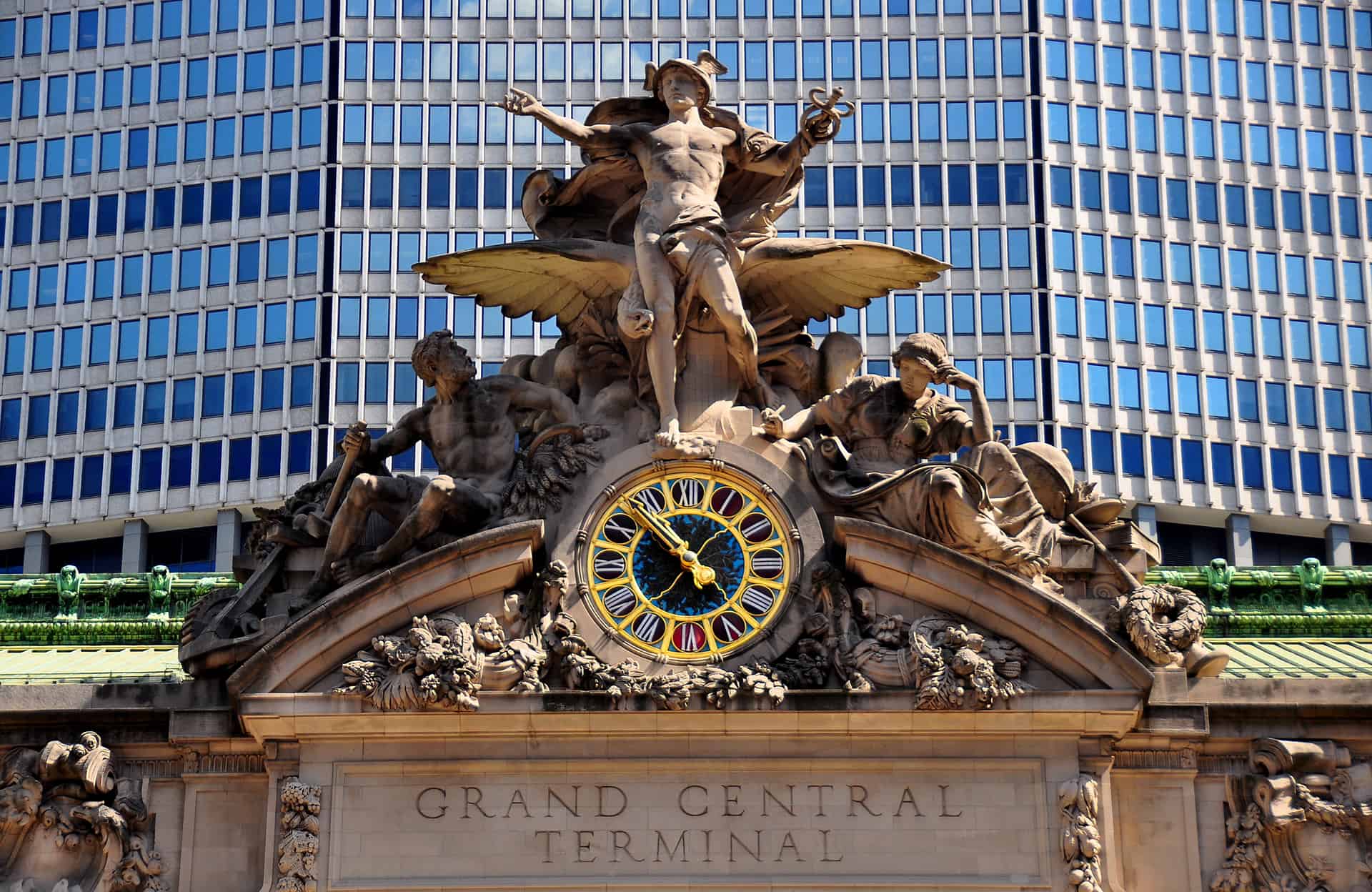 This train station is located on 42nd Street, in the centre of Manhattan, in Midtown, New York. The Grand Central Depot was originally built there in the second half of the 19th century.

In 1899 and 1900, in order to accommodate the growing number of passengers, it was partly demolished and replaced by a much larger building called Grand Central Station.

By 1903, expansion was once again necessary, particularly following a dramatic accident involving the collision of two steam trains. For a whole decade, the building was partially demolished and then rebuilt, expanding more and more. More than a hundred surrounding buildings had to be demolished – including 3 churches and 2 hospitals – to make way for what is still known today as Grand Central Terminal. The building opened in February 1913. At the time, it was a real upheaval in this district of New York!

During the 1970s however, the station was practically abandoned and became a particularly poorly frequented place. It is actually thanks to the efforts of former First Lady Jacqueline Kennedy and architect Philip Johnson, that this Terminal has now become a protected historic site.

During the 1990s, major renovation work was carried out to modernise this legendary New York station. On this occasion, a painting by French painter Paul-César Helleu, representing a starry sky, was restored on the ceiling of the main hall. It had previously been covered in dirt and soot.

The biggest Railway Station in the world 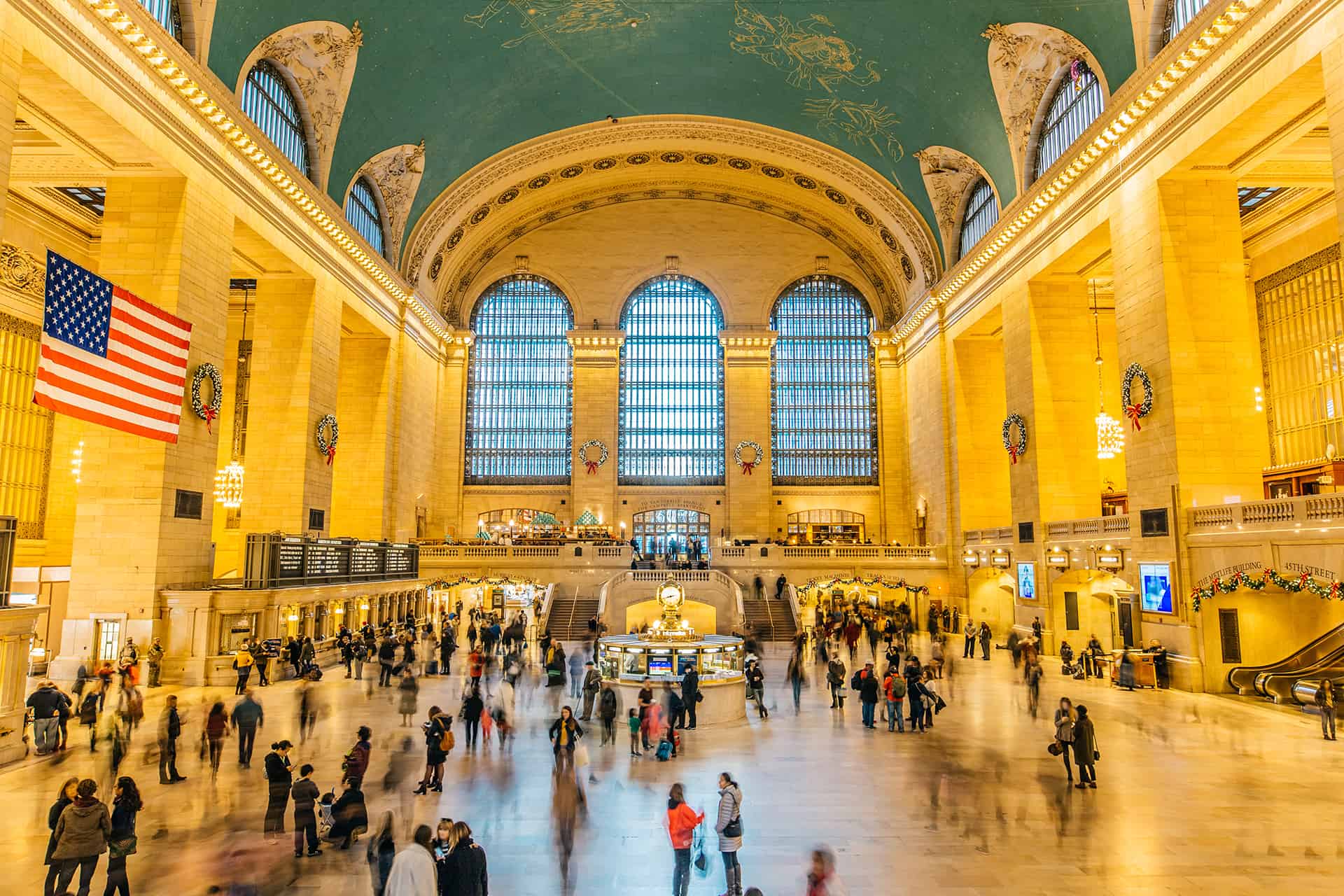 Grand Central Terminal is the train station with the most platforms in the world. In total, it has 44 platforms, which provide access to trains that run on 67 different tracks, spread over 2 levels. In addition to these platforms, the station has a very large shopping arcade with around 60 shops and restaurants.

The station is divided into 5 main parts:

Every day, more than 750,000 people pass through this terminal by train, underground or New York City bus. The huge building covers more than three hectares, has seven levels, and accommodates about 800 trains a day.

Today, the terminal receives trains from several lines that serve counties in New York State and Connecticut. It also has a very important underground station, where connections between lines 4, 5, 6 and 7 of the New York Subway are made. You can therefore easily get to Grand Central Terminal during your stay, by using a New York MetroCard.

Things to see and do in Grand Central Terminal

Grand Central Station is open every day of the year, from 5:30 am to 2 am.

It is located halfway between the Top of The Rock and the Empire State Building.

As soon as you enter the building, you can head to the main concourse – which is really the heart of this station – to admire its absolutely stunning architecture. As soon as you step into this huge hall (over 110m long and 36m high) you will understand why this station is considered a historic place.

It is also possible to discover the place with a local guide who will tell you all of this mythical and magnificent station’s history and secrets. I won't tell you more 😉

MORE DETAILS ON THE GUIDED TOUR BY CLICKING HERE 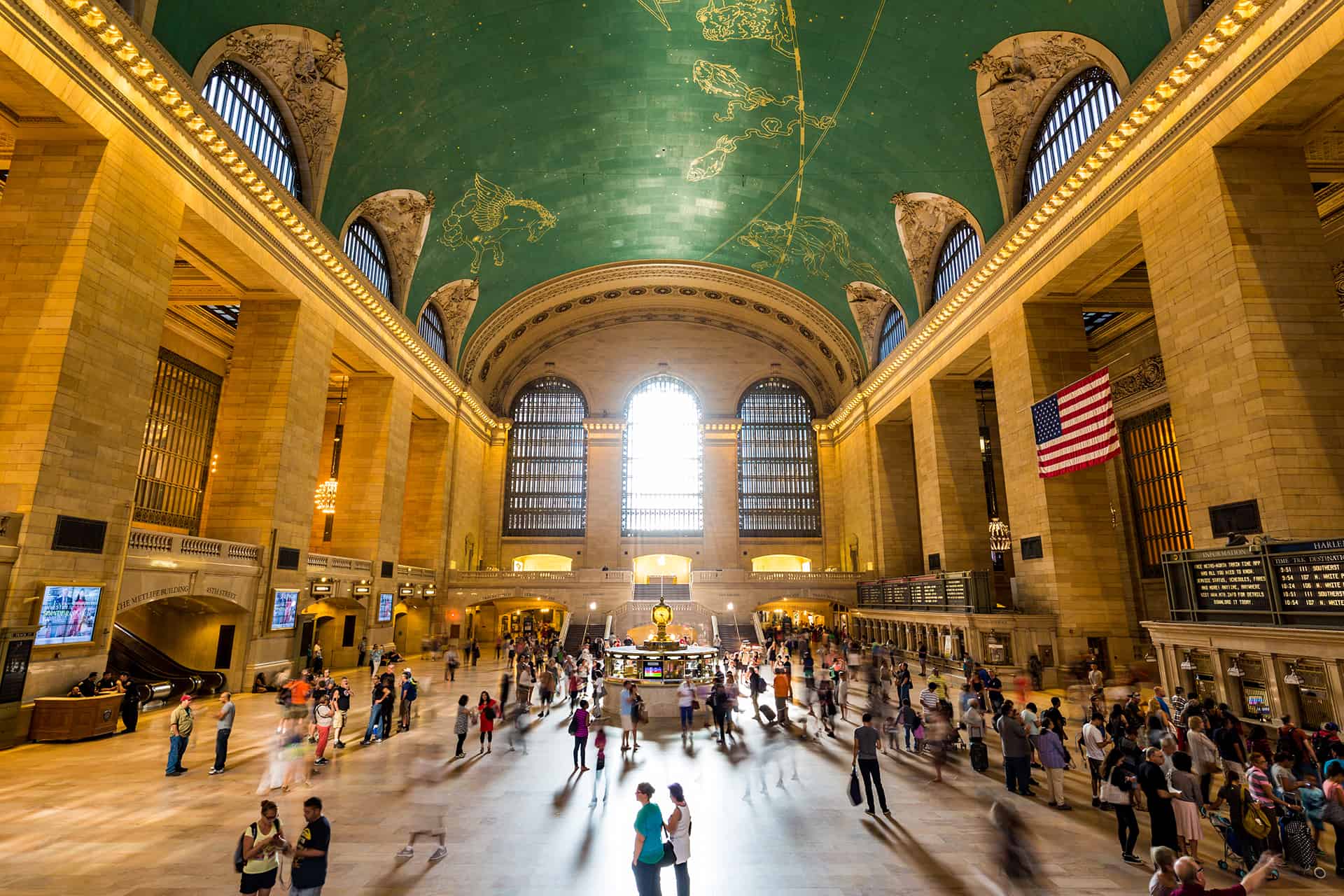 The vaulted ceiling of the main concourse is decorated with a huge painting covered in gold leaf. It depicts the 12 constellations of the zodiac, with over 2,500 stars – 59 of which are illuminated by LEDs. The sky is depicted as seen from the Mediterranean region during the winter.

The painting is actually completely inverted, and the constellations have been painted upside down. Some say that this is due to a mistake by the painter, but the founder of the station, Cornelius Vanderbilt, claimed that this was actually because the painting was meant to be viewed from a divine perspective, and therefore seen from above.

Near the Cancer Constellation, a darker brick can be seen. This is a reminder of how the ceiling looked before the major renovation that took place in the 1990s.

In addition to the soot from the steam trains, nicotine and tar residues had completely obscured this work of art. 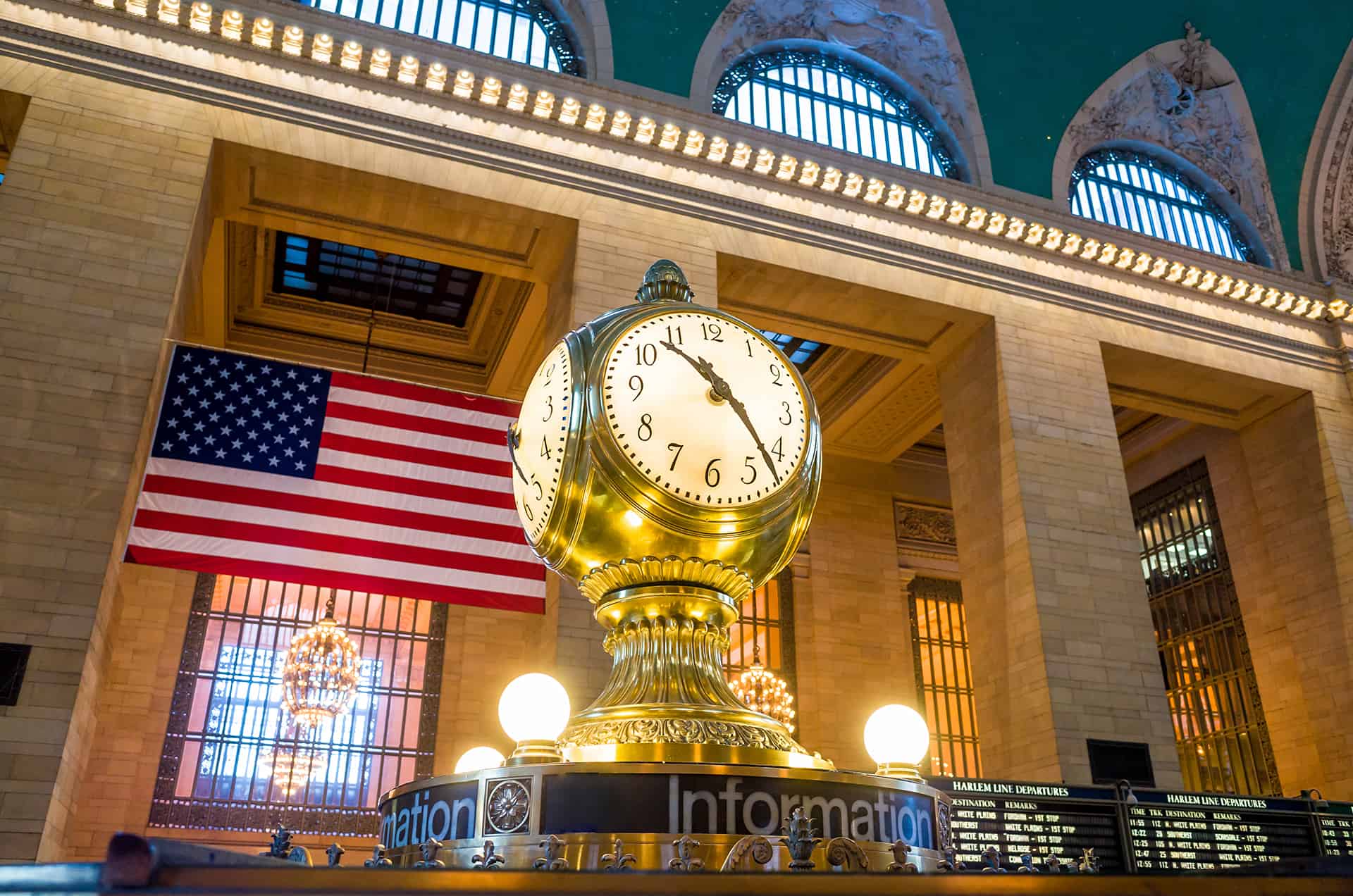 In the centre of the concourse is the information kiosk. Directly above it you can see the real jewel of this terminal: the four-sided clock. The value of this opal clock is estimated to be between 10 and 20 million dollars. The clock is a true symbol of the city, and serves as a meeting place for many, many New Yorkers every day.

Below the main concourse is the Dining Concourse – it is there that you will find many restaurants. As travellers going through Grand Central are often in a hurry, this is the place to go for fast food, with all the best-known fast food outlets present.

The Whispering Gallery is also located there. Under the archway directly opposite the Oyster Bar & Restaurant, you can try your hand at the most original and romantic form of communication. If you face one of the pillars of the arch and whisper a few words, the person on the other side of the corridor in the diagonal will hear your message perfectly. 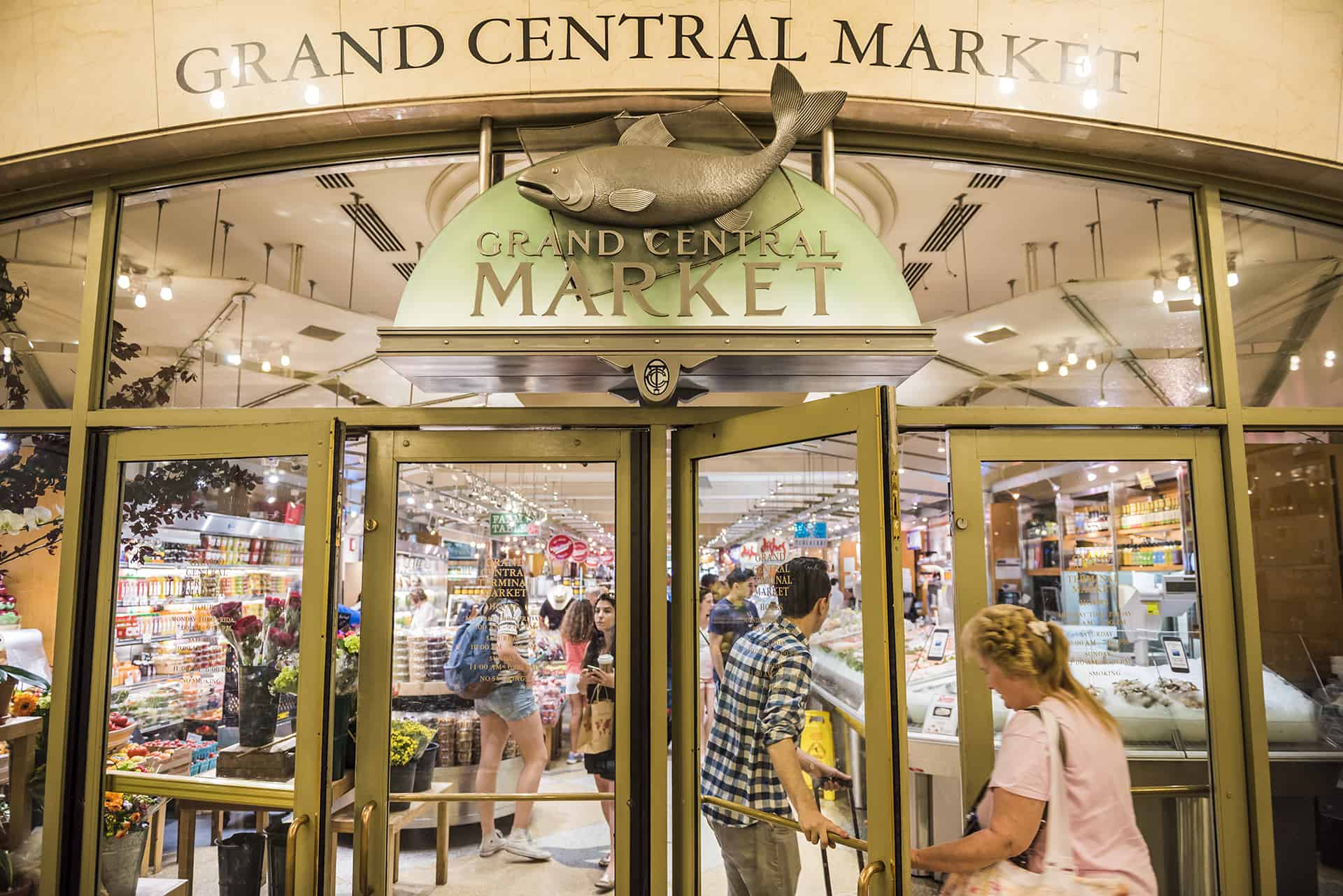 Located in the basement of the station, the Grand Central Market is a 120-metre long market with numerous stalls selling fresh delicatessen products, vegetables, meat and fish every day. In this market – very reminiscent of European markets – vendors offer seasonal ingredients and products, as well as ready-made meals. Grand Central Market is open weekdays from 8 am to 7 pm, and weekends from 11 am to 5 pm.

In addition to the market, restaurants and bars, you can also find a wide range of shops in Grand Central Terminal. Luxury stores sell designer bags, clothes and fashion accessories, and the station is also home to many souvenir shops, banks and insurance companies. At the top of the east staircase, you will reach the East Balcony, where you will find, among other things, an Apple Store that is very well integrated into the historic building’s structure. From there, you can enjoy an unobstructed view of Grand Central’s entire main concourse.

Know that it is possible to play tennis at Grand Central Terminal! There are 2 tennis courts available where travellers can play a little tennis while waiting for their train 😉 This is a really unusual activity to do around Grand Central.

Just above the main concourse, towards the Apple Store mentioned a bit above, are balconies. You'll be able to take some great photos from there!

Top of the Rock