ALL ABOUT CONEY ISLAND, ITS BEACHES AND AMUSEMENT PARKS

Coney Island is not necessarily the place to visit on a first trip to New York, but this peninsula located south-east of Brooklyn remains a place to see at least once in your life!

You will be REALLY surprised by the atmosphere of the place 😊 Even more so if you plan a stay in New York during the period from April to October, when Luna Park is open!

The atmosphere there is so exceptional that you will almost think you are in another place and another time!

If you are tempted by the experience and want to discover another side of New York, all while escaping the city's frenzy, I explain everything in this article. This will give you a good overview of the activities to do in Coney Island, and you will be able to prepare your stay from home 😊

Originally, Coney Island was an island populated only by wild rabbits. In the 1940s and 1950s, many immigrants from the Ukrainian city of Odessa settled there. After the Civil War, a railway and tram line was built and Coney Island became a peninsula.

Numerous developments have taken place over the century, making Coney Island’s beaches and large entertainment area a true tourist attraction for the people of New York.

Even though the area suffered a great lack of interest after the end of the Second World War, Russian immigrants brought it back to life. The openings of the field where the minor league baseball team (the "Brooklyn Cyclones") plays, and of the construction of Luna Park, are two of the main reasons for the island’s growing popularity.

Today, Coney Island has become a mythical place that you must see at least once in your life.

If this is not your first trip to New York and you don't know what to do in New York, discovering Coney Island is a very good activity!

How to get to CONEY ISLAND ? 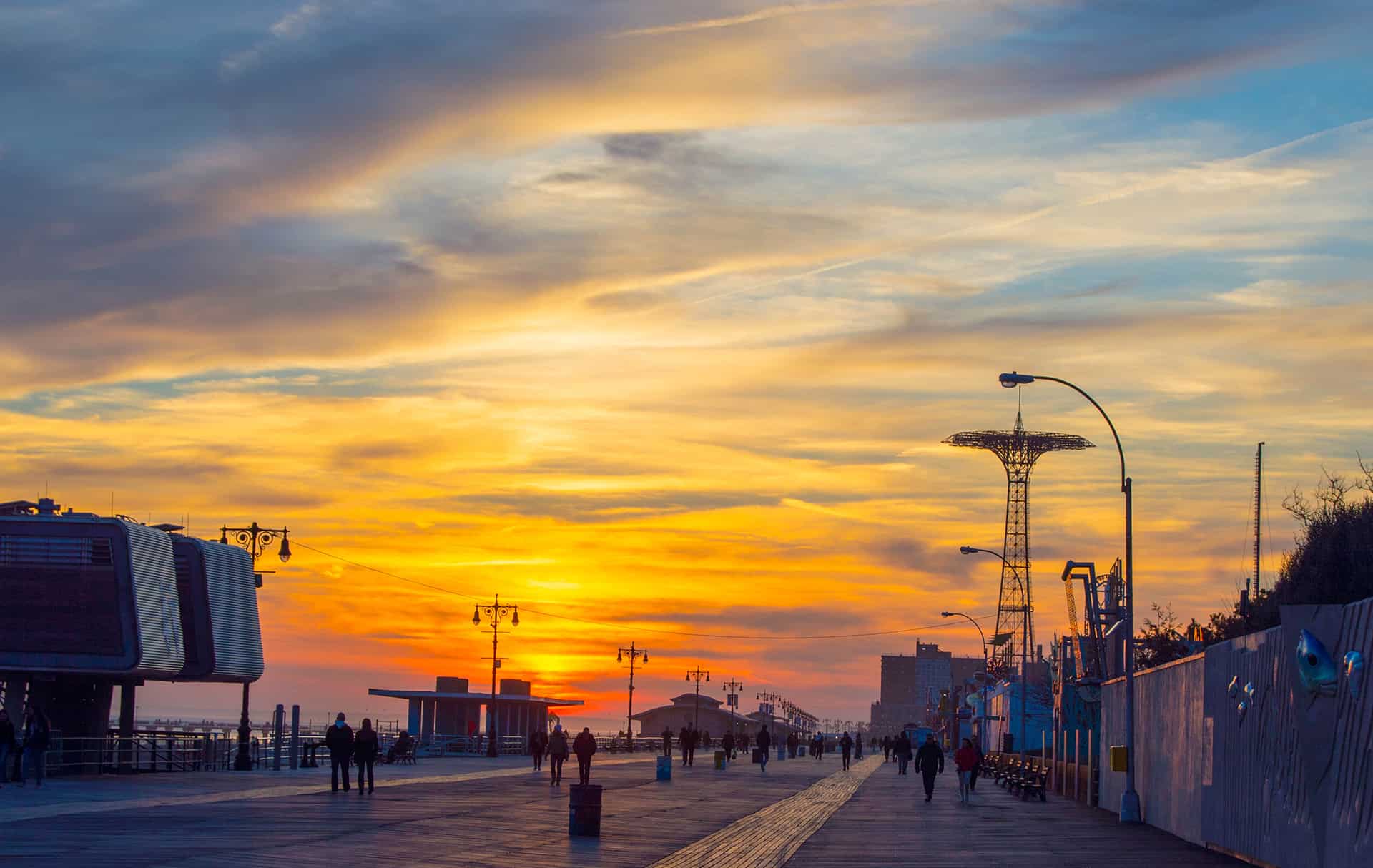 The best way to get to Coney Island is to take the underground.

From Manhattan, it will take you about an hour. You have two options:

The single ticket costs $3 (£2.30), but if you plan to use the underground often, I recommend getting a MetroCard for easy travel in New York.

The fastest way (about 20 minutes) is by taxi, but it is also the most expensive! You'll pay at least 80 euros (67 pounds). Going by car is therefore not the best option – unless you have rented one for the duration of your stay in New York!

You can also go to Coney Island by train. In that case, take the Q or F lines. The journey takes about 50 minutes.

Another option is to take the bus. There are direct buses that leave from the 5 Av/W 52 Street station and arrive at Cropsey Ave/Bay 49 Street in about 45 minutes.

A single bus ticket also costs 3 dollars (to be paid in coins only!).

The advantage of the bus and train is that you can enjoy a variety of New York views!

When to go to CONEY ISLAND ?

If you can, go to Coney Island between April and October, when the theme park is open. But the site can also be discovered in winter! There are fewer people in winter, so it will be quieter and above all it will be a complete change of scenery – and totally relaxing.

Note that if you don't want to spend the whole day there, one afternoon will be enough to discover the island. The best thing is to finish the evening at the amusement park: among all the neon-lit rides, you'll feel like you're in a completely different world!

SEE AVAILABILITY FOR THE LUNA PARK BY CLICKING HERE

What to do in CONEY ISLAND ?

There are many things to see and do in Coney Island. Frankly, it's one of the boroughs of New York that I especially like for its surrealism! Did you know that there were many beaches in New York? On my very first trip I had no idea!

Going to the beach

Coney Island beach is one of the biggest in New York (6.5 km). New Yorkers love to spend their summer holidays there when the heat gets too stifling in the city. 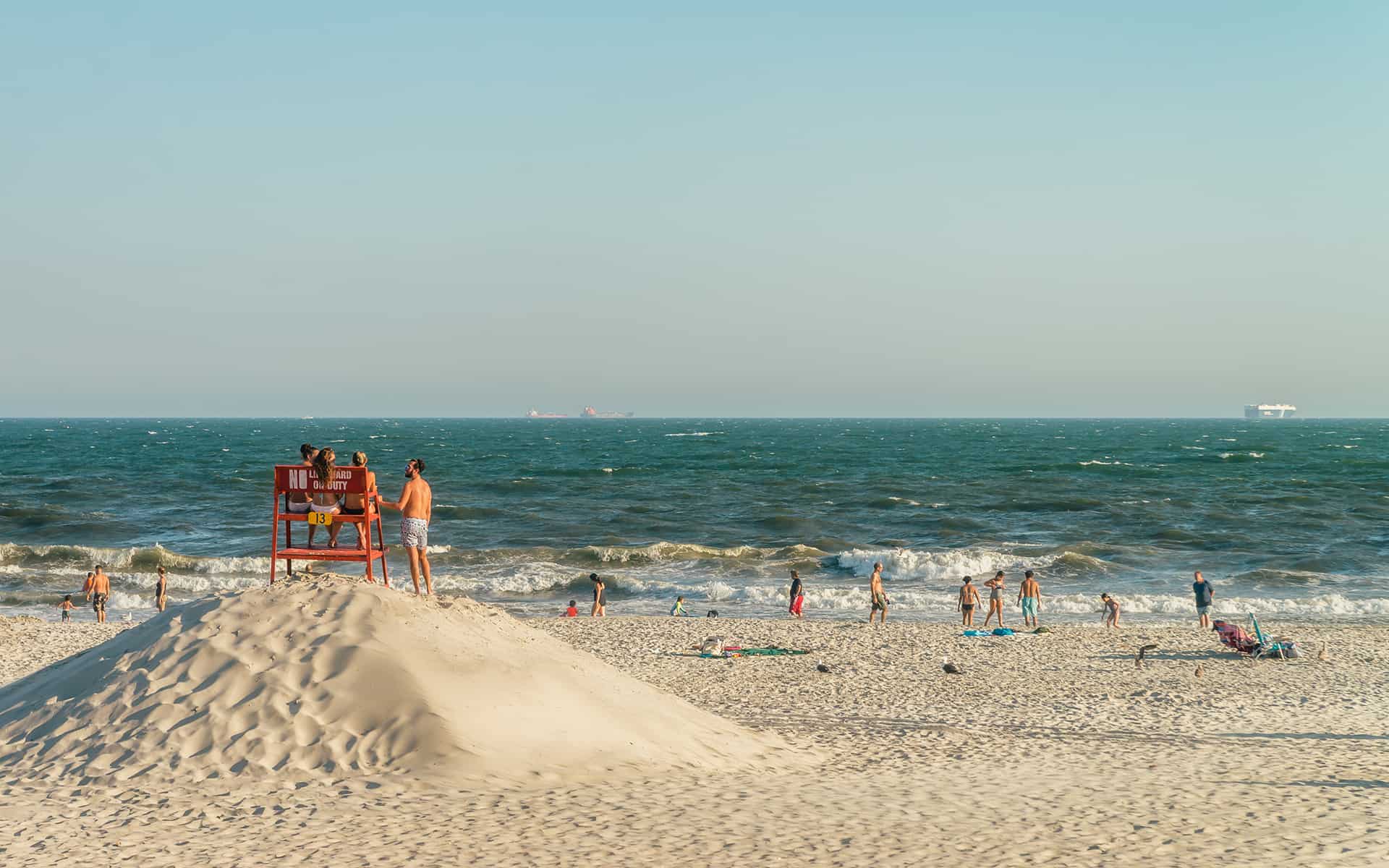 If you've come to Coney Island just to get some fresh air, relax and walk by the water, I suggest you get off at the Brighton Beach underground station. You will then be in New York's Russian neighbourhood, "Little Russia" or "Little Odessa". You will be able to discover the atmosphere of the Eastern European countries and taste some of their typical dishes. A mind-boggling change of scenery!

Then, you can follow the longest boardwalk in the world, the "Riegelmann" boardwalk. For 5 km, you will have the sea on one side and numerous attractions, shops and restaurants on the other. And at the end of this boardwalk, you will find the Luna Park.

The beach is also lined with basketball, handball and beach volleyball courts, which are a real treat for sports enthusiasts.

Take a trip to the AQUARIUM

Coney Island is home to the New York City Aquarium (there are no others) so if you've come with children, this is definitely a must-see!

You'll find the aquarium on the boardwalk side. In it, you will see:

The opening hours of the park differ depending on the periods:

Here are the entrance fees: 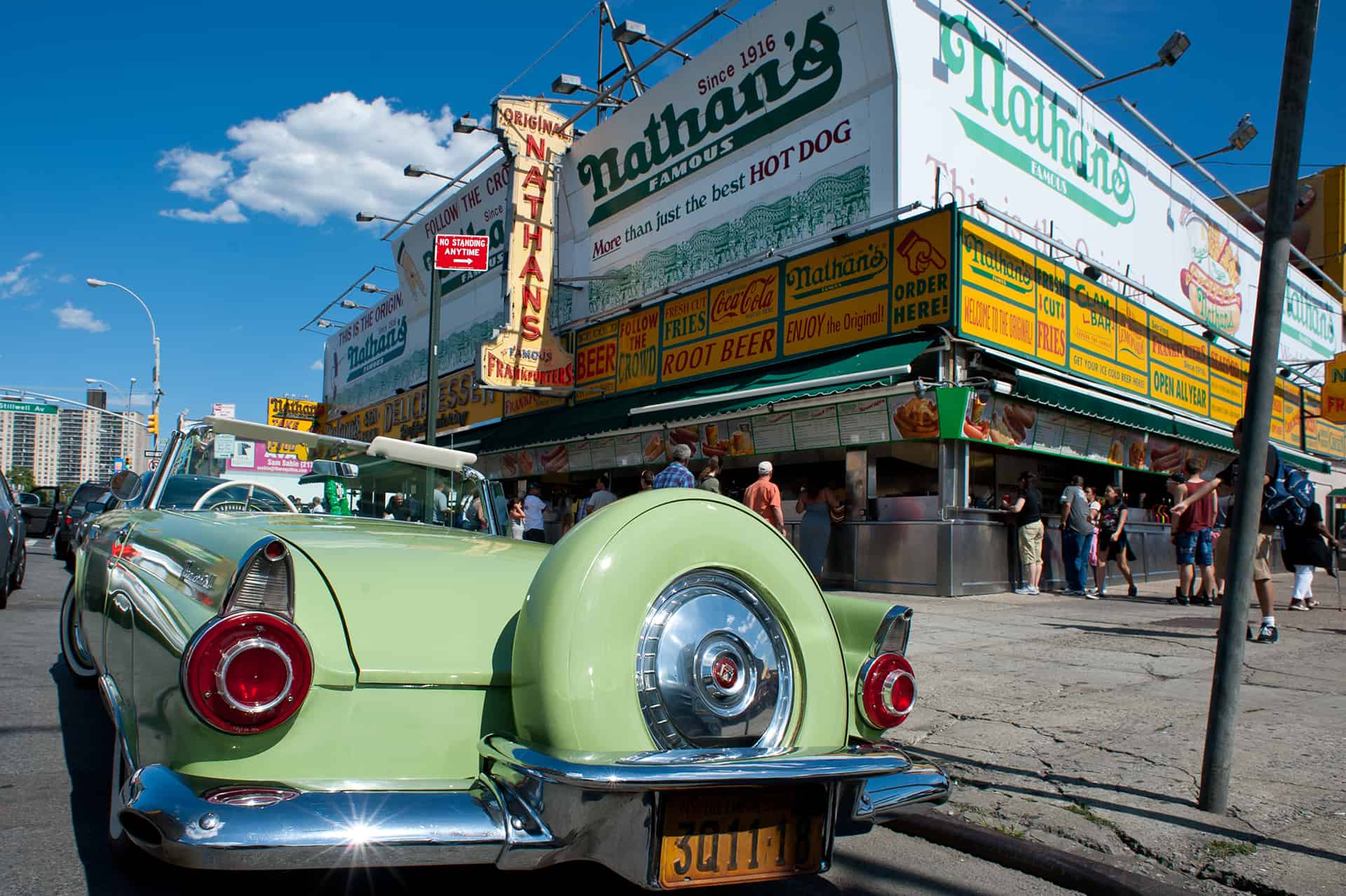 It's impossible to go to Coney Island without having a bite to eat! For me, the place to go is "Nathan's Famous" to taste "the best hotdogs in the world". It's the most famous stand in the area as well as the oldest. Address: 1310 Surf Avenue.

It was in Coney Island that the first Nathan's opened its doors in 1916. Little did Nathan and Ida Handwerker know that their frankfurter business would become a true institution in the United States!

Every 4th of July (US Independence Day), the biggest hot dog eating contest is held here.

You must also go to Coney's Cones for ice cream, but you'll have a hard time choosing between all the delicious homemade ice creams!

And if you're hungrier, don't miss the burgers at Paul's Daughter, or the pizzas at Totonno's. Unless you prefer the chicken at Wildwood Rotisserie / Famous Rotisserie And Grill? 😊

And of course, no trip to Coney Island without a seafood meal! Go to "Pete's Clam Stop" for example – the restaurant is famous for its clam soup.

Children will of course prefer to stop in front of Williams Candy Shop, a shop full of candies, marshmallows and candyfloss.

Having fun at LUNA PARK 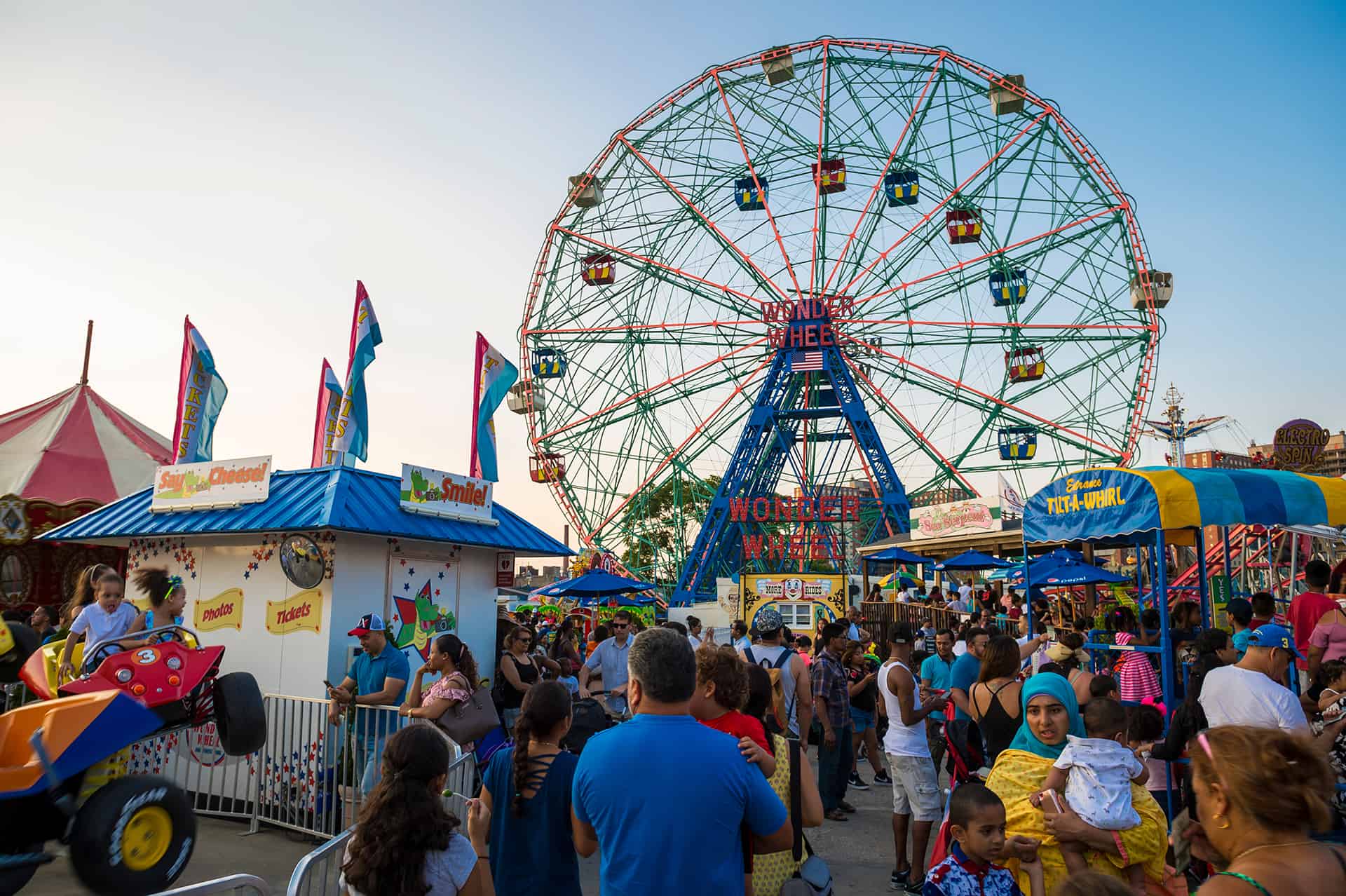 Built in 1903, Luna Park is one of the oldest amusement parks in the country. This mythical and slightly kitschy park is really a great place to play and relax. And while there are several parks on Coney Island, Luna Park is THE reason many New Yorkers visit the peninsula.

Since then, it opens every year from the Easter holidays until October:

Generally, it is open from 10 or 11 am to 11 pm - midnight, but these hours can change, due to the weather mainly. You can check the park’s opening hours directly on the official website.

There are about 30 attractions in the park: rides, roller coasters, games, an arcade and go-karts – but the most populars are the Wonder Wheel (45 metres high) which has been there since 1920, and the Cyclone roller coaster – including the huge wooden and metal Cyclone Roller Coaster (opened in 1927) which has been classified as a site of national interest.

The attractions at Luna Park are classified into various categories:

Admission is free, but to ride the attractions and rides, you must exchange your dollars for "Luna Credits". 1 credit = $1. Each ride costs x credits.

You can also buy various types of passes:

There are also restaurants and food stalls in the park, and fireworks are held every Friday night at around 9:30 pm.

Take a trip to the oter themes parks

You can also have fun at Deno's Wonder Wheel Amusement Park. This park is located  right next to Luna Park and some consider it to be part of it. Address: 3059 W 12th St.

It offers more than a dozen attractions and rides: a Ferris wheel, the Cyclone Roller Coaster, bumper cars and even a haunted house.

The park is open from midday to midnight:

Admission is free. You can buy tickets for the rides individually or in sets.

Adult prices for attractions vary (8 or 10 credits), but for children each attraction costs 5 credits.

Other things to do at CONEY ISLAND

If you are at Coney Island in the summer, enjoy the live music in the amphitheatre (a semi-open space on the boardwalk). Note that shows are held there throughout the year.

The Coney Island Mermaid Parade is also an event not to be missed! Since 1983, it has marked the beginning of summer: thousands of people dress up as mermaids and parade on foot, on floats or in cars. At the end of the festivities, a king and queen are elected.

If you want to know more about the history of Coney Island, take the time to visit the Coney Island Museum. You will also find many souvenirs there.

Additionally, there is a street art museum on the island, the Coney Art Walls. It is open every day from 12 pm to 10 pm.

Transfer from JFK airport to Manhattan