WHAT TO SEE & DO IN GREENWICH VILLAGE?

Greenwich Village is a New York district with an atmosphere quite different from the other districts of the city. With its quiet streets and red-brick houses, The Village is a charming neighbourhood much appreciated by artists for its bohemian atmosphere.

Greenwich Village was built on a former swampy area by the first Dutch settlers who came to the area in the first half of the 17th century. For a long time, the village developed rather slowly, and remained separate from Manhattan and New York.

It was not until the early 19th century, following the yellow fever epidemic that drove New Yorkers to Greenwich Village, that the development of this borough of New York accelerated.

Many wealthy New Yorkers, who had moved to Greenwich, built beautiful homes there in the classic old New York style. Later, the wealthier population migrated further north, and immigrants from Ireland, Italy and China settled in large numbers in Greenwich Village. 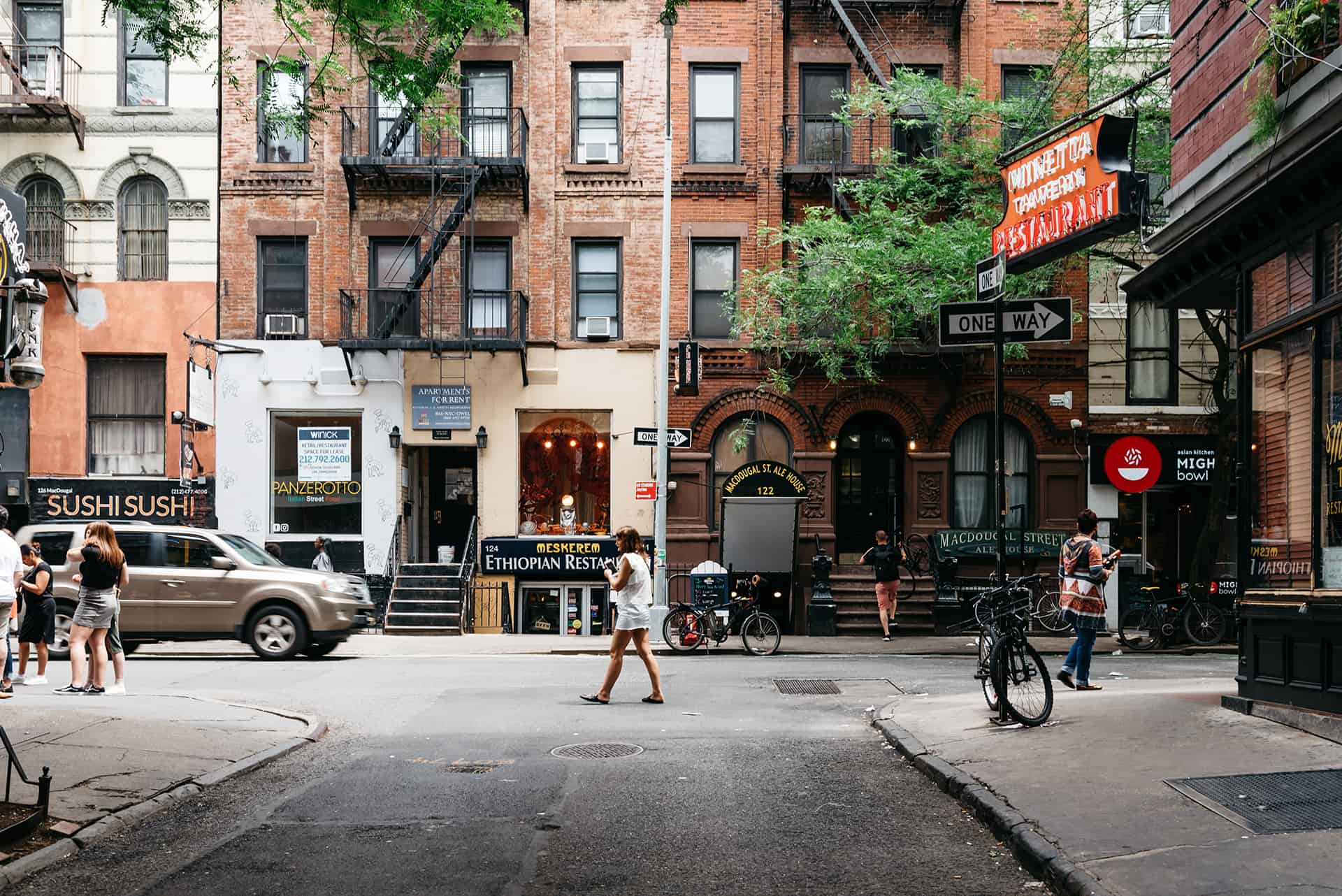 During the second half of the nineteenth century and the first half of the twentieth century, rent prices in Greenwich were much lower than in many other parts of Manhattan and New York, attracting many artists who wanted to live a  bohemian existence.

The atmosphere in Greenwich therefore quickly changed, and it soon became a place where artists felt inspired and totally free to practice their art as they saw fit. Famous names in painting and literature, such as Mark Twain, Salvador Dali and Andy Warhol, lived in Greenwich.

Today, The Village, as it is known to New Yorkers, is famous around the world.

Although rents have risen dramatically in recent decades, the neighbourhood has remained a symbol of artistic flourishing and bohemian lifestyle.

The beautiful homes and high quality of life in the area have made Greenwich one of the most desirable areas in Manhattan. Although the population living in Greenwich has become much more middle-class, the neighbourhood has retained much of its identity. It is still an avant-garde, cutting-edge area with a relaxed atmosphere and a vibrant nightlife.

The influence of Greenwich Village on television and cinéma

This modern artist's neighbourhood, with its typical buildings and numerous green spaces, is quite representative of trendy New York life in the eyes of the general public. Countless novels, films and TV shows are set in Greenwich Village.

The legendary series Friends takes place almost entirely in The Village, and if you walk in Greenwich, you can even see the building occupied by the show's characters. The district is also the setting for many other series and films, such as Sex and the City, Ghostbusters and Doctor Strange.

In Men in Black 2, a humorous nod is given to Greenwich's reputation as an open and contrarian neighbourhood, when a receptionist tells the aliens that Greenwich is the only place they can walk in during the day.

You have the opportunity to discover this area with a local guide who will show you the different sites during a short 2-hour tour.

TO DISCOVER GREENWICH VILLAGE WITH A LOCAL GUIDE, CLICK HERE 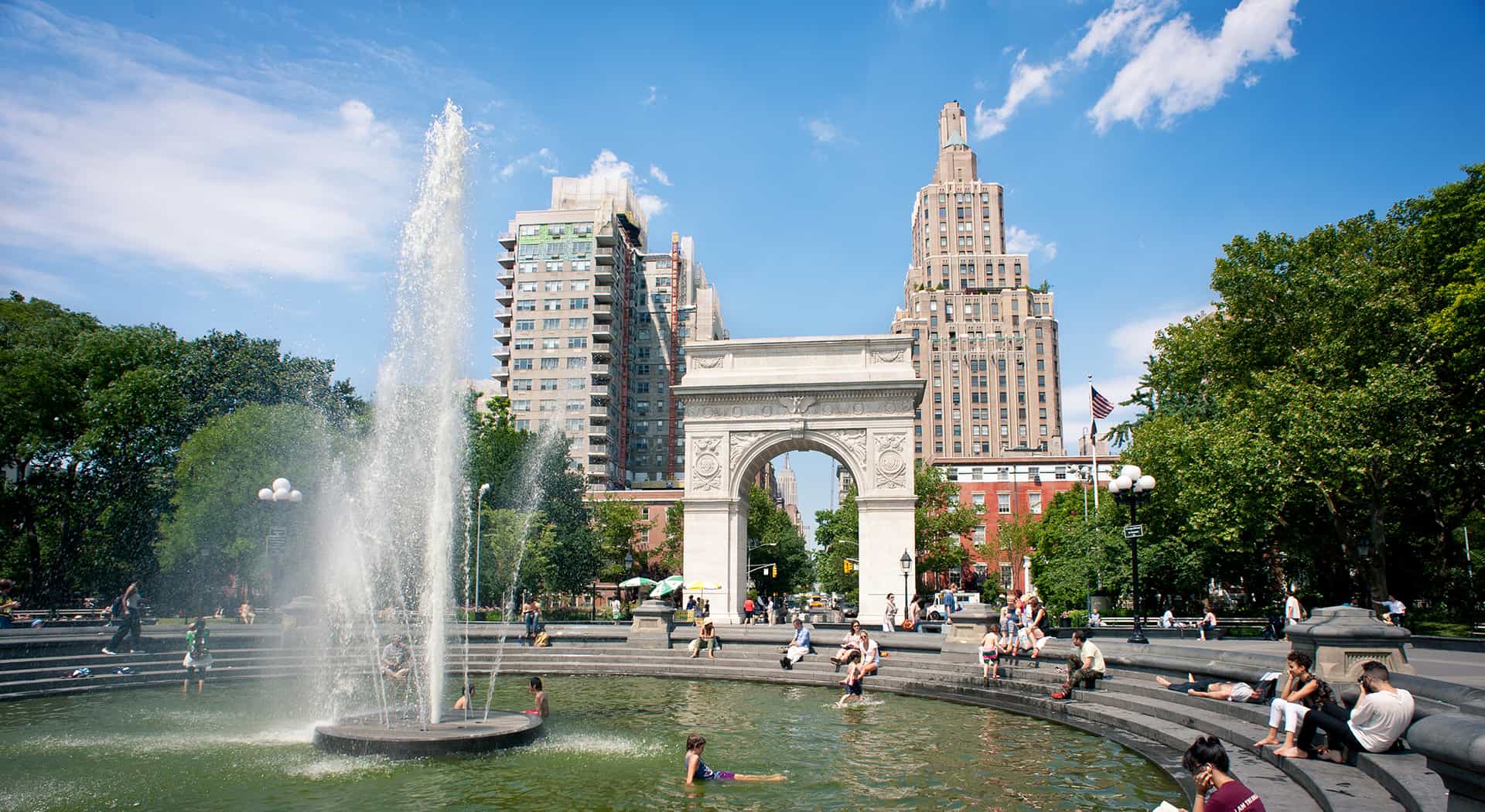 There are several parks in the neighbourhood, but Washington Square Park is by far the most interesting. It is also the largest and probably one of the most beautiful parks in New York. Historically, the centre of the park was a site of public executions. Fortunately, that past is long gone and today the park is a great place to relax and enjoy a beautiful day.
Surrounding the park are some of the buildings of the New York University, which has a total of nearly 60,000 students. You can also visit the Grey Art Gallery, the university's art museum, which houses exhibitions from all over the world.

I mentioned earlier the influence Greenwich had on popular culture and especially on cinema. There is little doubt that you have seen this park in a film. In fact, you may well come across a film crew at work during your visit to Washington Park Square!

You will also encounter musicians and street performers who will liven up your walk. The chess players on the park benches are also a symbol of Greenwich.

The park's main landmark is the Washington Square Arch,  a triumphal arch built to mark the centenary of President George Washington's inauguration.

This museum is dedicated to the victims of 11 September 2001, but is very different from the National September 11 Memorial & Museum, located on the site of the former Twin Towers. Here you can take a guided tour of a small, more intimate museum, founded by Gary Marlon Suson, the former official photographer for the New York Fire Department.

He was the only photographer allowed to take pictures during the rubble removal operations. All of Ground Zero Museum Workshop’s photographs and artefacts are housed in one room, and the guide responsible for telling you anecdotes and stories about some of the artefacts will give you a whole new perspective on the events of 9/11. Ground Zero Museum Workshop sont réunis dans une seule pièce, et le guide chargé de vous raconter des anecdotes et des histoires sur certains de ces objets vous permettra de découvrir les évènements du 11 septembre d’un œil nouveau. 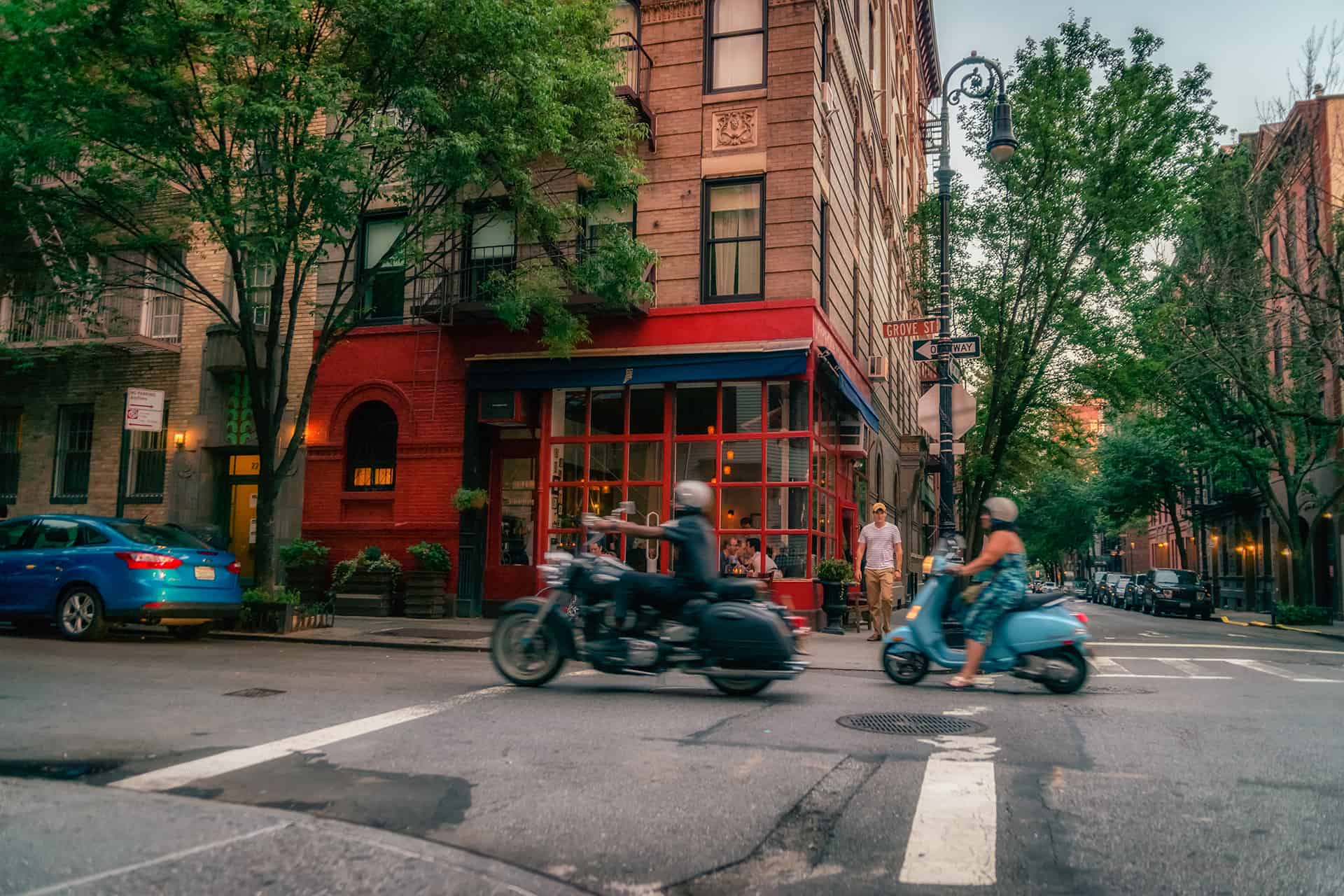 Another cult flat from a TV show is Sex and the City heroine Carrie Bradshow's apartment at 66th Perry Street.

St Mark Place is a famous and historic street. It was for a long time a place where artists, poets and musicians met. It was one of Andy Warhol's favourite places, and an important part of graffiti history. It also made rock history in 1975, when two of its buildings appeared on the cover of Led Zeppelin's fifth album: Physical Graffity.

In a trendy area with a lot of artists, you're bound to find designer boutiques, often with cutting-edge collections. But in Greenwich, you'll actually find a lot of shops and boutiques of all kinds.

Bleecker Street is one of New York's most unique shopping destinations, with many clothing and fashion accessory shops. On the first part of this street, between Father Demo Square and Christopher Street, you can find small vintage shops that often offer items at particularly good prices. Further along the street, as far as Bleecker Playground, you will find all the big brand and designer shops, offering luxury items. 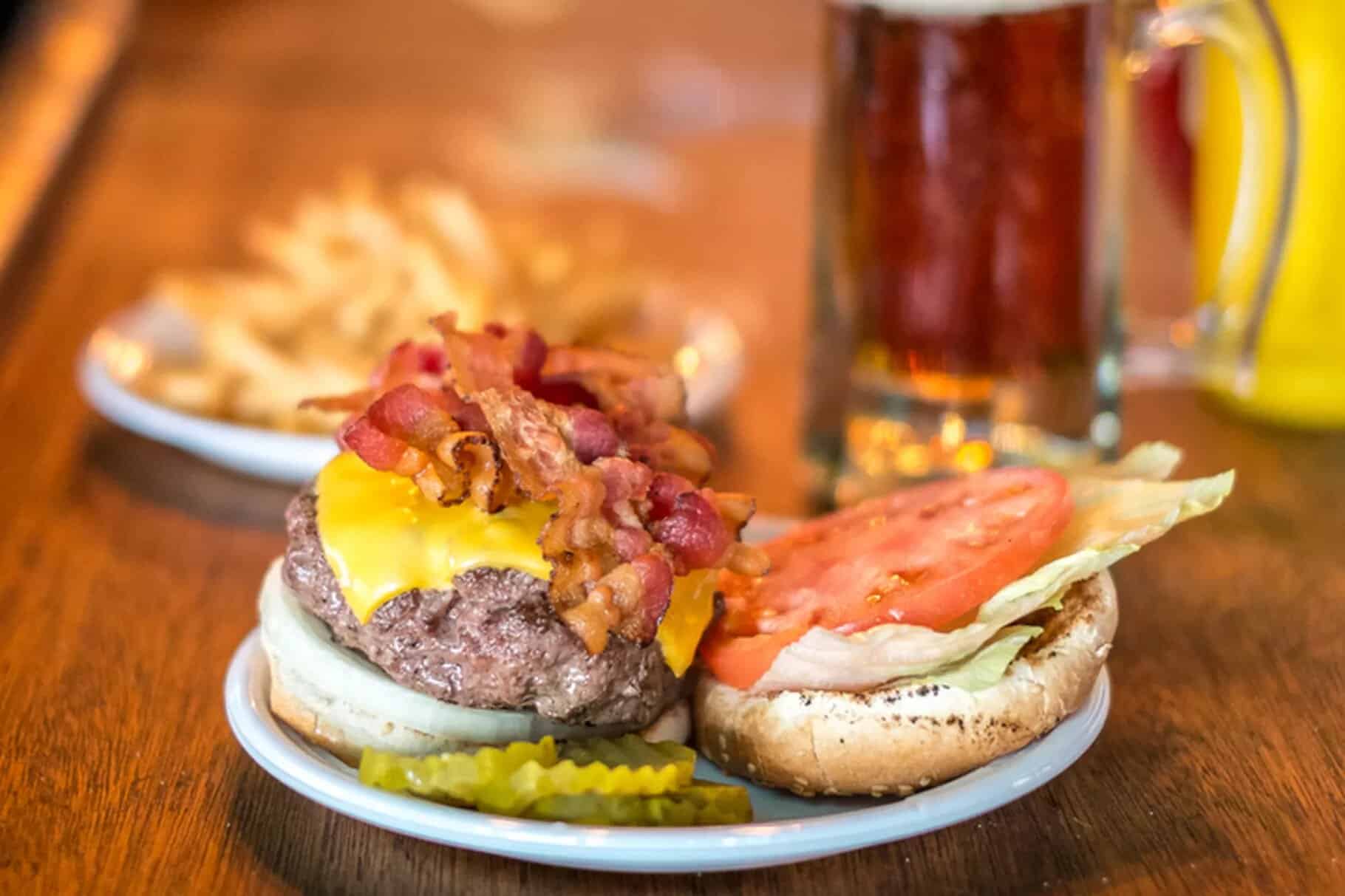 For a more classic meal, you can go to Olio e Piú on Greenwich Avenue – an Italian restaurant that is one of the most popular in New York.

If you're feeling peckish while exploring the area, you can go to Magnolia Bakery. This little Greenwich bakery is actually the oldest shop of what is now one of the city's largest bakery and pastry chains.

Speaking of bakeries, you can take a walking tour of the neighbourhood to see the best cupcake bakeries. Great for learning about the history of Cupcakes in Manhattan as well as the craze people have for this pastry – but also for touring the neighbourhood itself and, of course, sampling some true gems 😋

MORE DETAILS ON THE GUIDED TOUR BY CLICKING HERE

Going out in  Greenwich Village 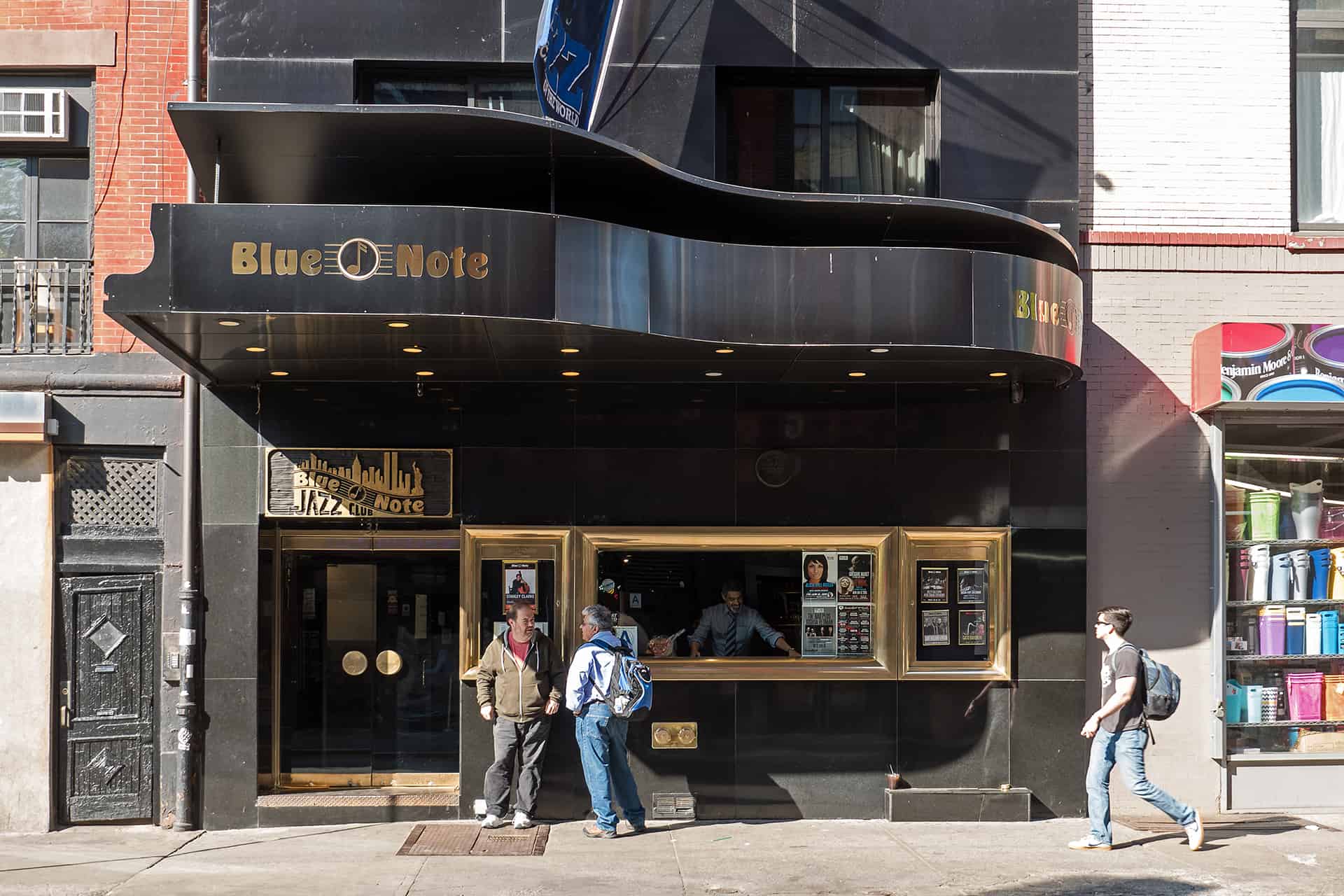 In Greenwich Village, there are many small music clubs where you can have a memorable evening – especially if you like jazz. At clubs like the Fat Cat, Blue Note Jazz Club and Marie’s Crisis Cafe, talented musicians perform every night. Admission is free, and you'll just have to buy something to enjoy the show.

Bleecker Street is not just a shopping street – it is actually best known for its bars and nightclubs. Some of New York's most famous clubs, such as The Bitter End and The Village Gate, are located on this street. It is definitely the place to go if you want to experience Greenwich Village at night!

How to get to Greenwich village ?

This residential area of New York is located in the southwestern part of Manhattan. It is surrounded by Soho to the south, East Village to the east and Chelsea to the north. To the west, the neighbourhood is bordered by the Hudson River.

To get to Greenwich Village, you can take the New York Subway and stop at West 4 St. Washington Square Station.

You will then be within walking distance of Washington Square Park, which is a great place to start your visit to Greenwich Village