What to see and do in SoHo?

SoHo is a very popular neighbourhood of Manhattan, located west of Little Italy. This multifaceted neighbourhood can be both modern, chic and lively, and much quieter and more relaxing in its residential part. SoHo is a must-see place for its shops and fashion boutiques, but also for its industrial buildings with atypical architecture, its museums and its art galleries.

Here is a short guide to help you learn more about this borough of New York, which is one of the places you really should not overlook when visiting the city.

The history of SoHo

In the 19th century, the area was home to an industrial zone known as Hell’s Hundred Acres.

In the late 19th century and the first half of the 20th century, the textile industry developed greatly in this area. Today, the famous Cast-iron Buildings are still there to testify to the intense industrial activity present in this district during the industrial revolution.

It was in the 1960s, when these industrial buildings were abandoned, that many artists moved to SoHo. For them, these large buildings, which were offered at a very good price on the real estate market, were perfect places to establish a studio or an art gallery. By 1973, the area had become a historic neighbourhood, and many industrial buildings were completely converted into lofts and studios; and by 1990, SoHo had become the district of choice for contemporary artists, with over 300 art galleries.

As a result of SoHo’s revival, real estate prices rose again, and many artists were forced to move to other areas where real estate was more affordable, such as Brooklyn. Today, the SoHo district has become a very touristy place in New York.

It is especially known for its many luxury boutiques, and has become one of the city's favourite shopping areas.

It is possible to discover this area during a guided tour, which will also allow you to discover the Chinatown and Little Italy districts – that are just next door. If you're part of a group, this can be a really good value for money and you'll enjoy exploring the neighbourhoods with a local guide who will explain the fascinating stories behind every corner of these three neighbourhoods 🙂

Where is SoHo located? 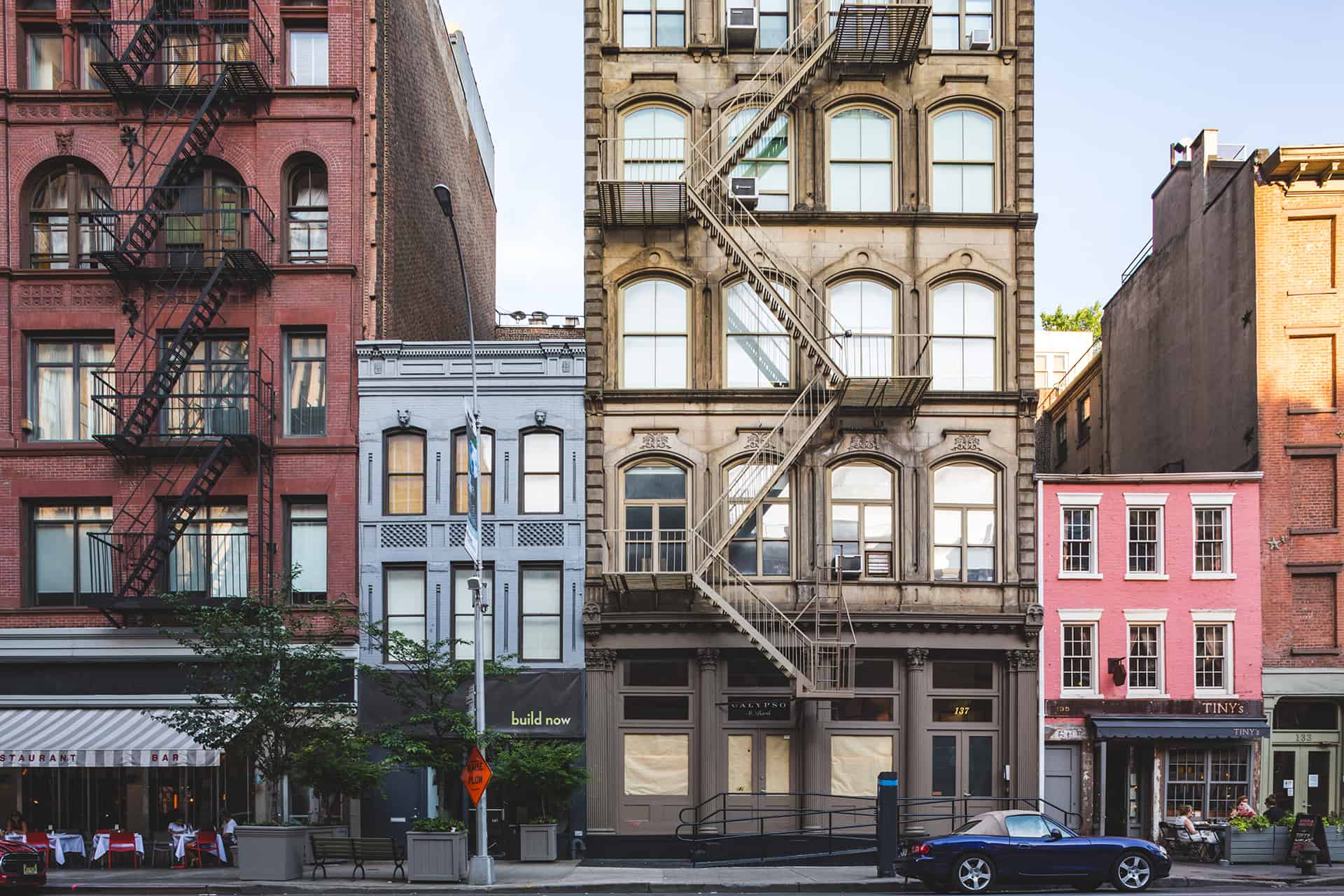 SoHo is a Manhattan neighbourhood that owes its name to its geographical location. In fact, SoHo is located south of Houston Street (SOuth of HOuston St.). The name has therefore no relation to the London district of Soho. The district is bounded on the north by Houston Street, on the south by Canal Street, on the east by Crosby Street and on the west by 6th Avenue and the Hudson River.

As soon as you enter the streets of SoHo, you will notice the characteristic architectural style of the buildings in the area. SoHo is one of the places with the most cast iron buildings in the world.

Today, most of these huge buildings have been refurbished and are now home to lofts of much more reasonable size. This rich architectural heritage has earned SoHo a National Historic Landmark designation and a place on the National Register of Historic Places.

During the industrial revolution, the price of cast iron fell dramatically, to the point that it became a cheaper material than stone or brick. This new manufacturing method, with the production of standardised parts, not only reduced construction costs, but also reduced the risk of fire. As a result, it was widely used both for factory structures and facades, and for residential buildings. These buildings are known as the Cast-iron Buildings.

Staircases and ladders, which were added in the early 20th century, can be found on the facades. The facades also feature many decorative elements typical of European Renaissance and Second Empire architecture, such as arcades, cornices and balustrades. 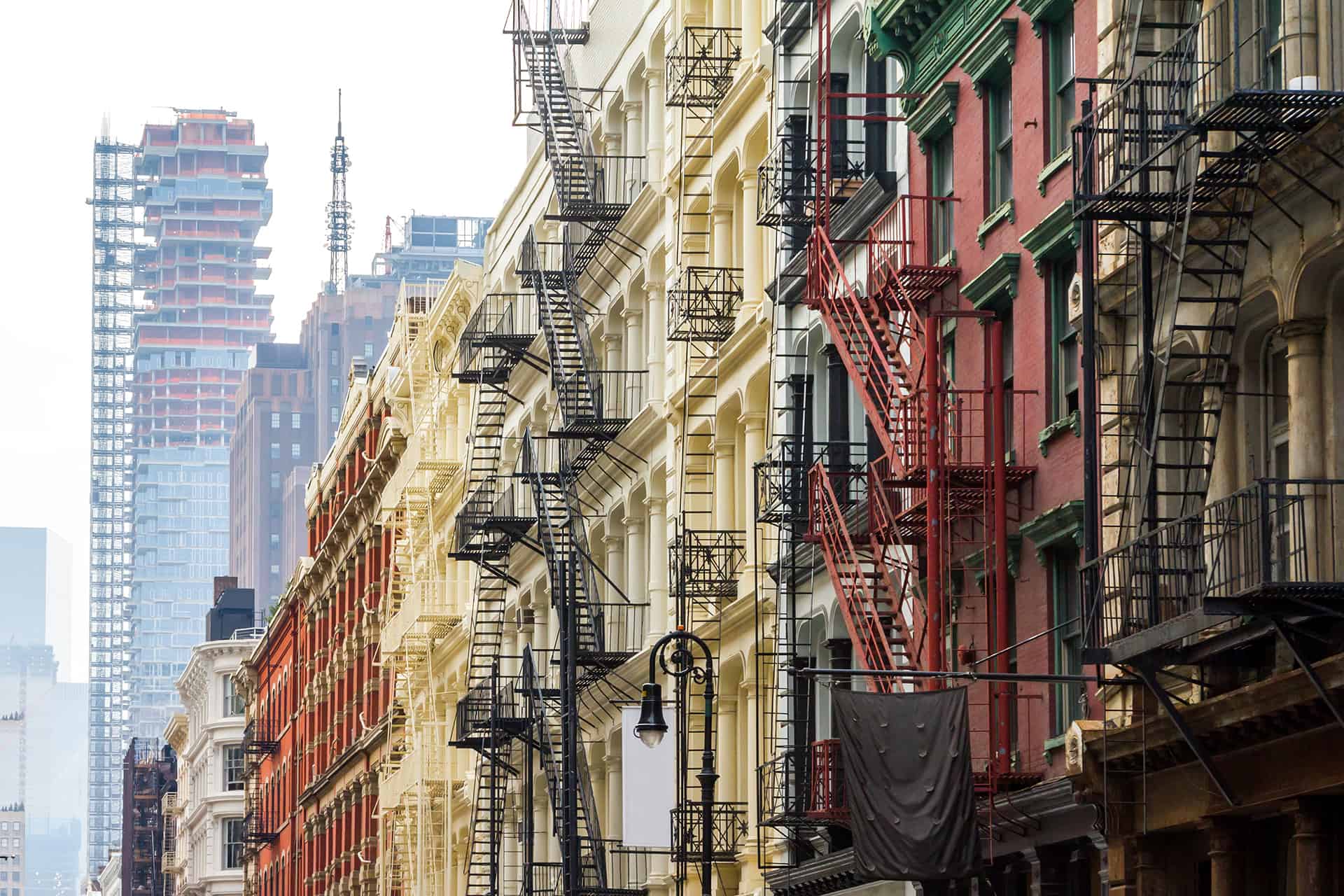 While in SoHo, you can take a stroll through the neighbourhood’s streets to see the most beautiful of the Cast-iron Buildings. They are located on Broome Street, Broadway, Green Street and Mercer Street.

You can see, for example:

Where to go shopping?

In SoHo, shopping is almost a way of life. In this neighbourhood, you will find clothing shops, jewellery shops, home improvement shops, and designer boutiques on every corner. SoHo is undoubtedly one of the most popular destinations in New York for shopping aficionados.

Many of the largest and most famous retailers are located along Broadway and Mercer Street. You can therefore go to the intersection of Prince Street and Broadway to start your shopping spree: you will find a Bloomingdale's shop – or an Old Navy’s shop, which offers a wide range of fashion for children and adults both at affordable prices. Other famous stores on Broadway include Victoria Secret, Forever 21, H&M, Uniqlo and American Eagle Outfitters.

Along Broome Street, Prince Street and Spring Street you will find a number of smaller shops. It is along these cobbled streets that you will find designer boutiques and luxury brands such as Stella McCartney, Louis Vuitton and Marc Jacobs.

SoHo also hosts a large indoor market: Artists & Fleas. In this market located on Broadway, in a former sewing factory, you will find forty or so stalls where designers and craftsmen offer entirely handmade products. Artists & Fleas SoHo is open every day, even on Sundays. 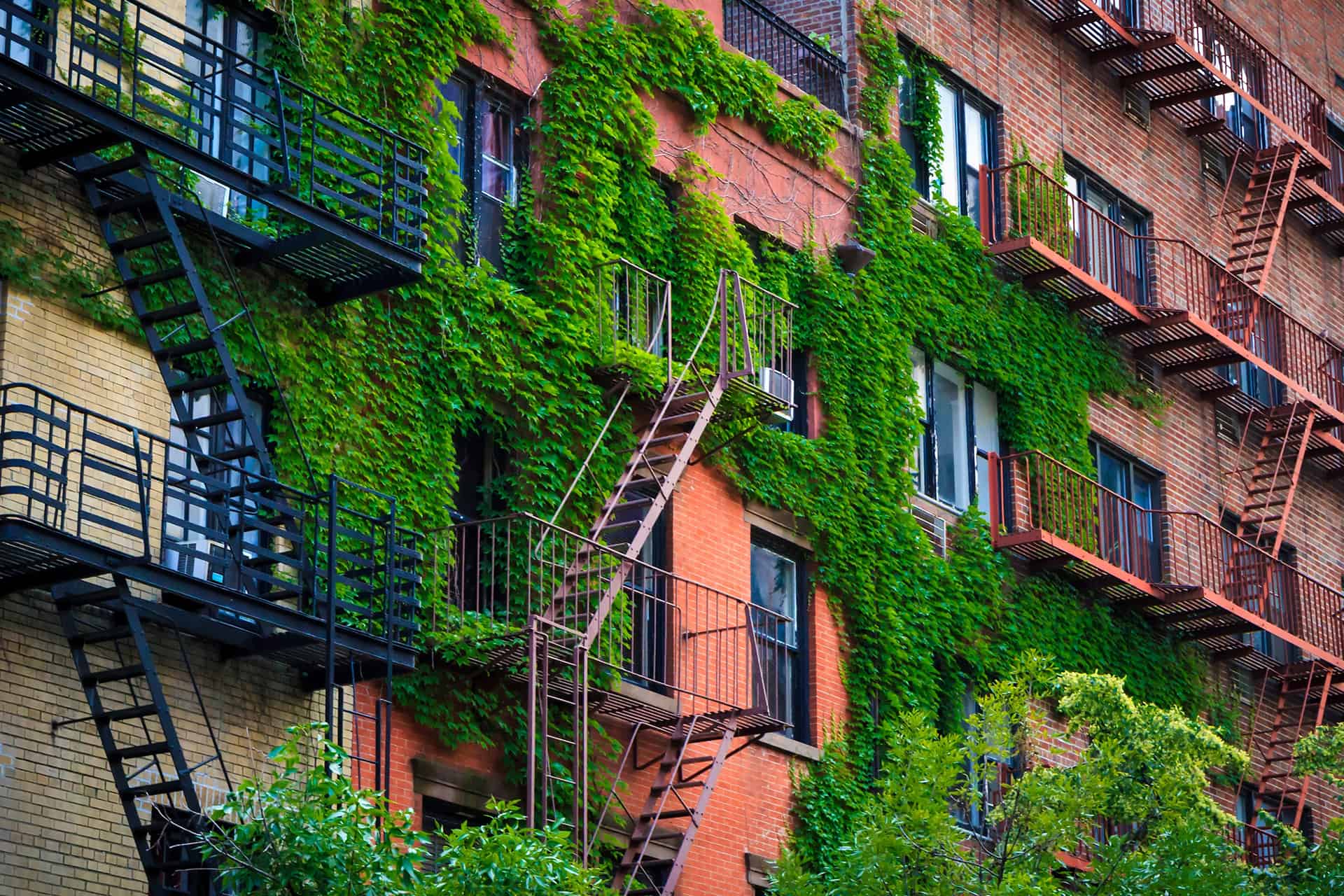 Cultural venues to discover in SoHo

SoHo is also a culturally rich area, and you can visit several memorable museums:

For all that it is now very much a shopping district, SoHo has not forgotten its rich artistic history and many art studios can still be visited today. Among the most famous are:

Where to eat and go out in SoHo?

There are several good places to eat in Soho. Ed’s Lobster Bar is famous for its lobster dishes, including the famous Lobster Rolls. At the Mercer Hotel, you can try one of the best burgers in the city. For a typical cheesecake, you can visit Eileen’s Special Cheesecake. Pizza lovers can also find one of New York’s best pizza places in Soho: Ben's Pizza.

Right next to Soho, you can also take a walking tour of the most popular pastry shops in Manhattan. This is an original activity to do – especially if you are looking for something a little less popular and touristy. You'll learn about the Cupcake craze that has taken hold in New York City, and more specifically Manhattan, and you'll get to taste some during the activity 🙂

On top of that, SoHo is a very lively neighbourhood where you can spend a memorable evening. You won't find the big clubs here like in some other parts of New York. Instead, you can go to bars with a great atmosphere, such as Fanelli's Cafe, located at 94 Prince Street. Weather permitting, you can even drop by The James New York at 27 Grand Street and sit in its second-floor garden to enjoy the view of the streets of SoHo.

It’s a great place to have a good time!