ALL THE INFORMATION ON THE NEW YORK UNDERGROUND

The New York metro is without a doubt one of the best ways to get around the city.

New York is an extremely large city, where it is possible to visit a huge number of places in just a few days. If you're planning a trip to New York, you'll probably have to use the underground to make it easier to get around when you visit. Fortunately, the network is very well developed and operates at all hours of the day. 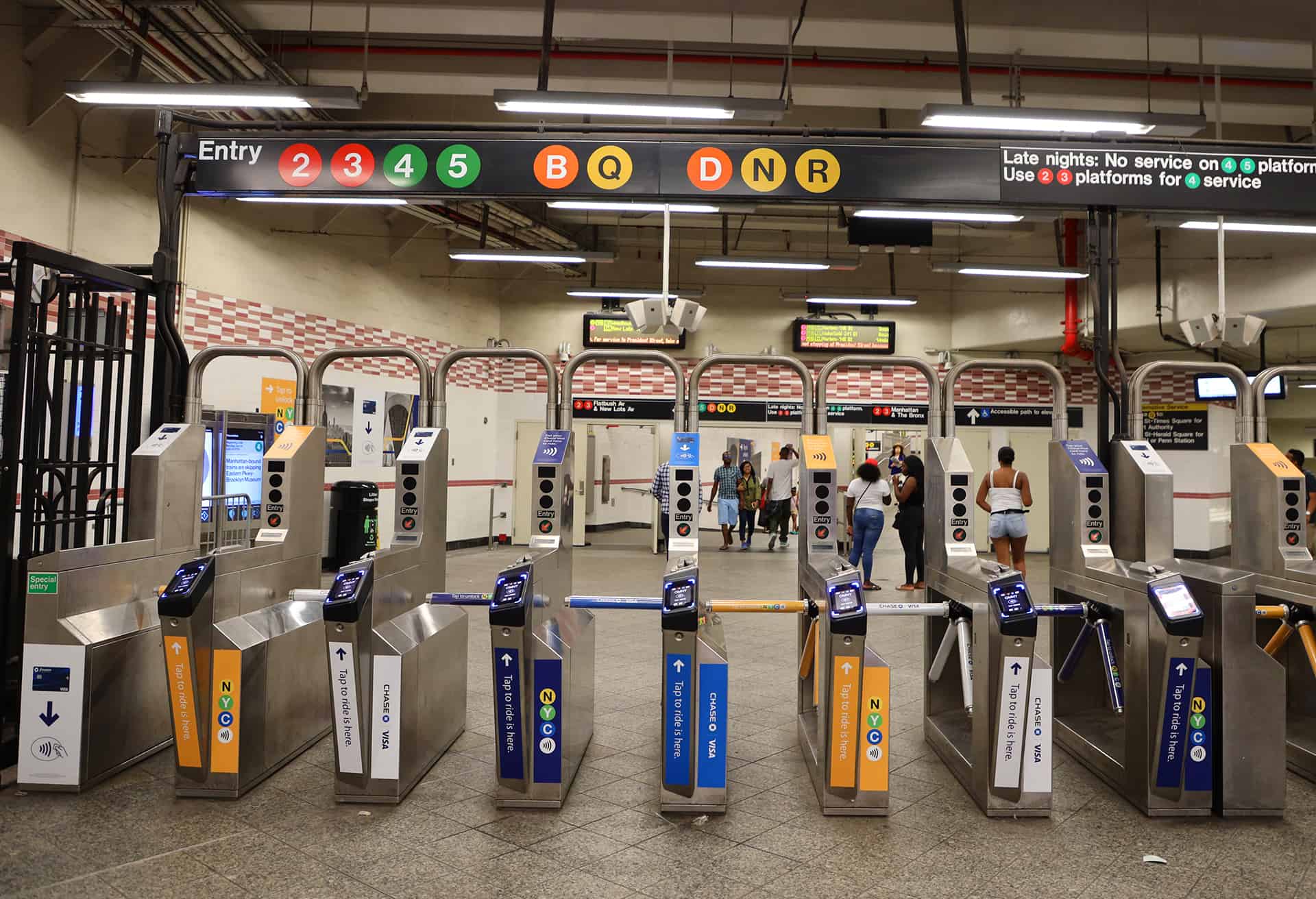 The New York underground was one of the first in the world to be built. The very first line was built in 1904. Today, the network comprises a total of 28 lines, serving over 450 stations. The Metropolitan Transportation Authority (MTA) is responsible for the operation of almost 1,400 km of underground tracks.

Each line is recognisable by the combination of a number or letter and a colour. The colours correspond to the areas of the city. For example, the colour red represents lines 1, 2 and 3, which run in the eastern part of Manhattan.

The underground runs 24 hours a day. During rush hour, trains run every 2 to 5 minutes and even at night, at least 3 trains per hour are always scheduled. The underground is the most used means of transportation by New Yorkers. Every day, more than 4.5 million people use the New York Subway.

How the New York underground works

At first glance, taking the underground in New York might seem like a real headache, even if you are used to metros in other big cities. If you think that once in New York, all you have to do is go to the nearest station and easily figure out this works – you might be in for a wake-up call. Fortunately, knowing a few things about how the New York City underground system works can make everything much clearer.

In each station you will find maps of the underground system, which are provided free of charge.

However, these fold-out maps are often rather inconvenient to use. Moreover, you can also find several free applications to use with your smartphone. These are more useful, especially thanks to geolocation. You can also find an interactive map on the official MTA website.

Rules to remember for using the New York Underground

The first thing you should know is that not all stations are accessible in both directions. This means that when you enter an underground station, there is no guarantee that you will be able to get off your train at that exact same station on your way back.

Some stations are two-way, and others operate in only one direction (Uptown) or the other (Downtown).

In all cases, this information is indicated above each metro station.

The MetroCard, which you will have to use to travel on the underground, can only be used once every 20 minutes or so. You should therefore be careful not to use it to enter on the wrong side of a station, if you don't want to waste time.

In the New York City Subway stations, a single platform often contains several tracks. You should therefore be careful not to take the first train that comes along, and instead check its number or letter before boarding it. This is the most common mistake made by newcomers, and it can lead to a series of other mistakes, turning what should be a simple journey into a real ordeal.

When the weekend comes, some underground lines change a lot. These changes are temporary and may concern both timetables and routes. Moreover, they are often rather badly indicated. If you see a white sign in the station showing the number of the metro line you are supposed to use, it would be wise to take the time to read it fully to make sure that a line modification will not disrupt your journey.

the express train and the local train 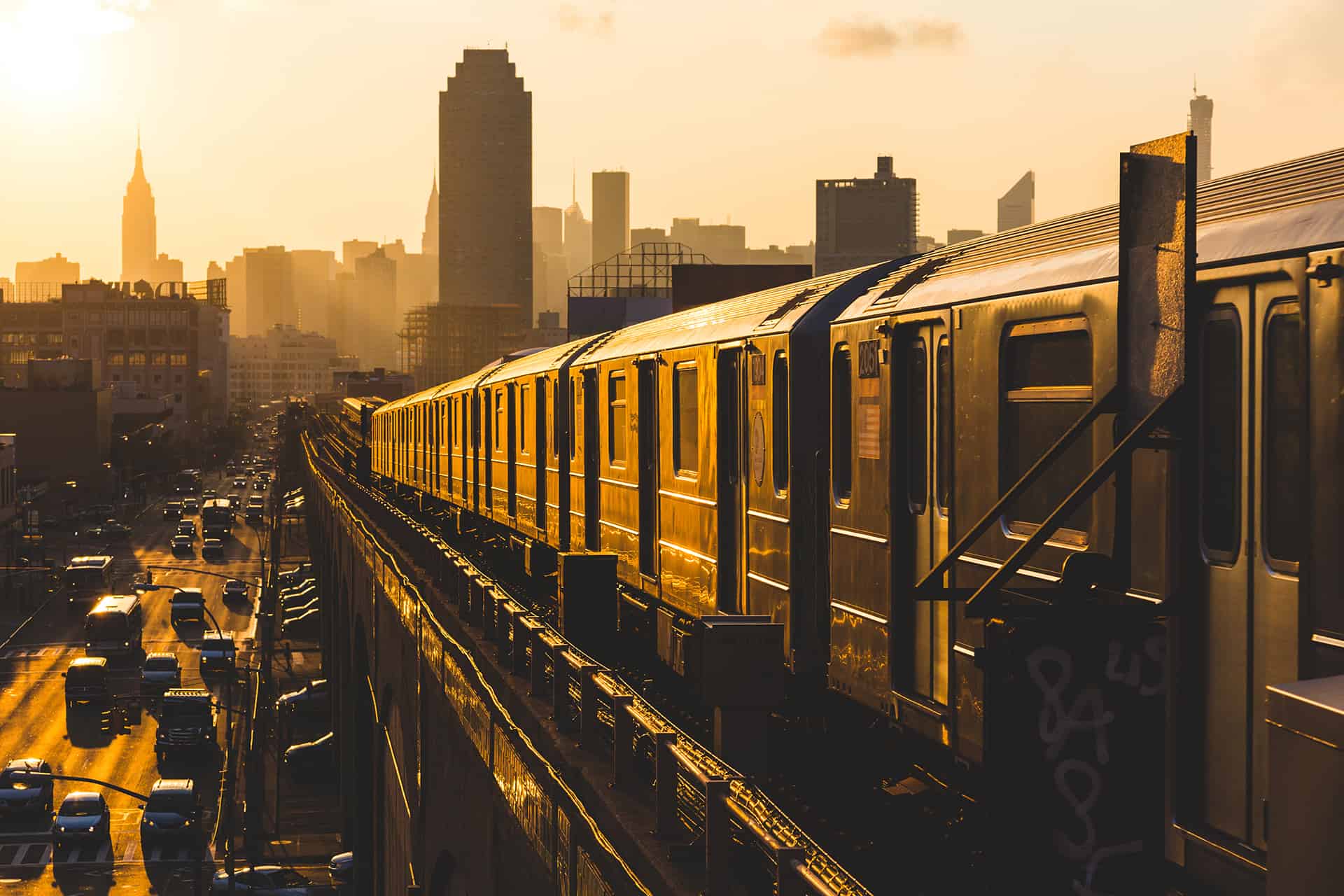 This is the second major piece of information to remember about using the New York underground. In addition to finding your way around on the map, it will be essential for you to be able to tell the difference between the two types of trains that run on the New York Subway lines. Each underground can be either "local" or "express". Local trains stop at all stations and take longer to complete long journeys. Express trains only stop at the most important stations and therefore run faster.

It will be necessary to be careful to take the right type of train, or you may waste time. In the worst case, you may not even be able to get off at your station at all, and have to go back in the opposite direction with a different train.

As a general rule, the vast majority of metros that run are local. When you arrive at the station, the message that sounds always indicates the type of train. You can also check this information on the screens on the platforms. The EXP and LCL indications will ensure that you do not make a mistake. On the metro maps, the stations that are served by local trains are indicated by a white dot, and the others by a black dot. 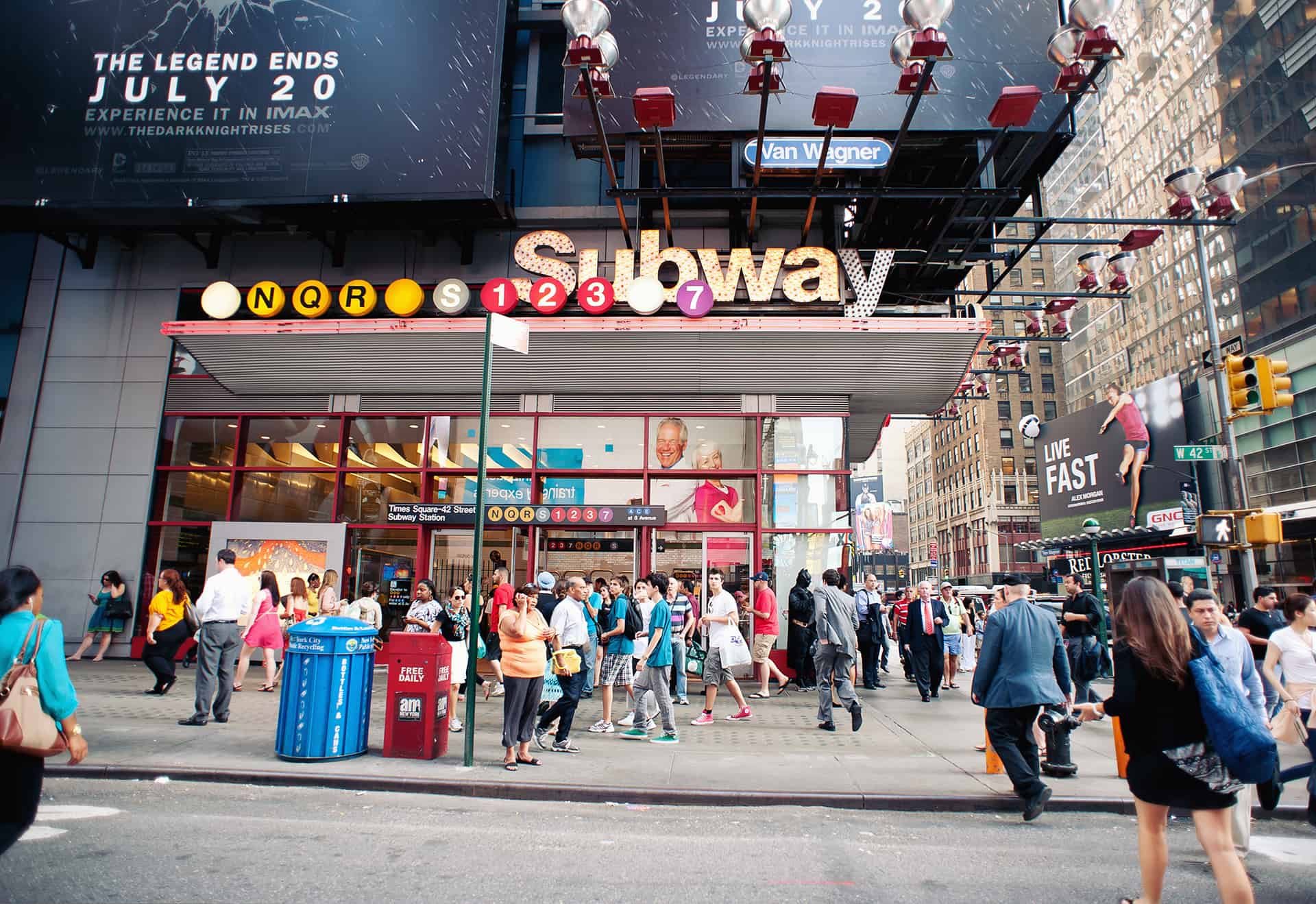 The first thing you need to know about tickets is that they are the same for both the underground and the buses in New York City. Only the "express buses", which run between the various airports in the metropolis and Manhattan, require a special ticket.

If you want to visit New York, paying for single rides is probably not the best option for your wallet... There are several ways to save money, thanks to the MetroCard:

Children measuring less than 112 cm can travel free on the metro and buses. Disabled people and people over 65 years of age are eligible for a discounted fare.

The Metrocard Pay-Per-Ride is not nominative, so it can be used by several different people, even on the same journey. Up to 4 people can travel at a time with this card, but you will of course have to use it once per passenger to pass through the turnstiles. 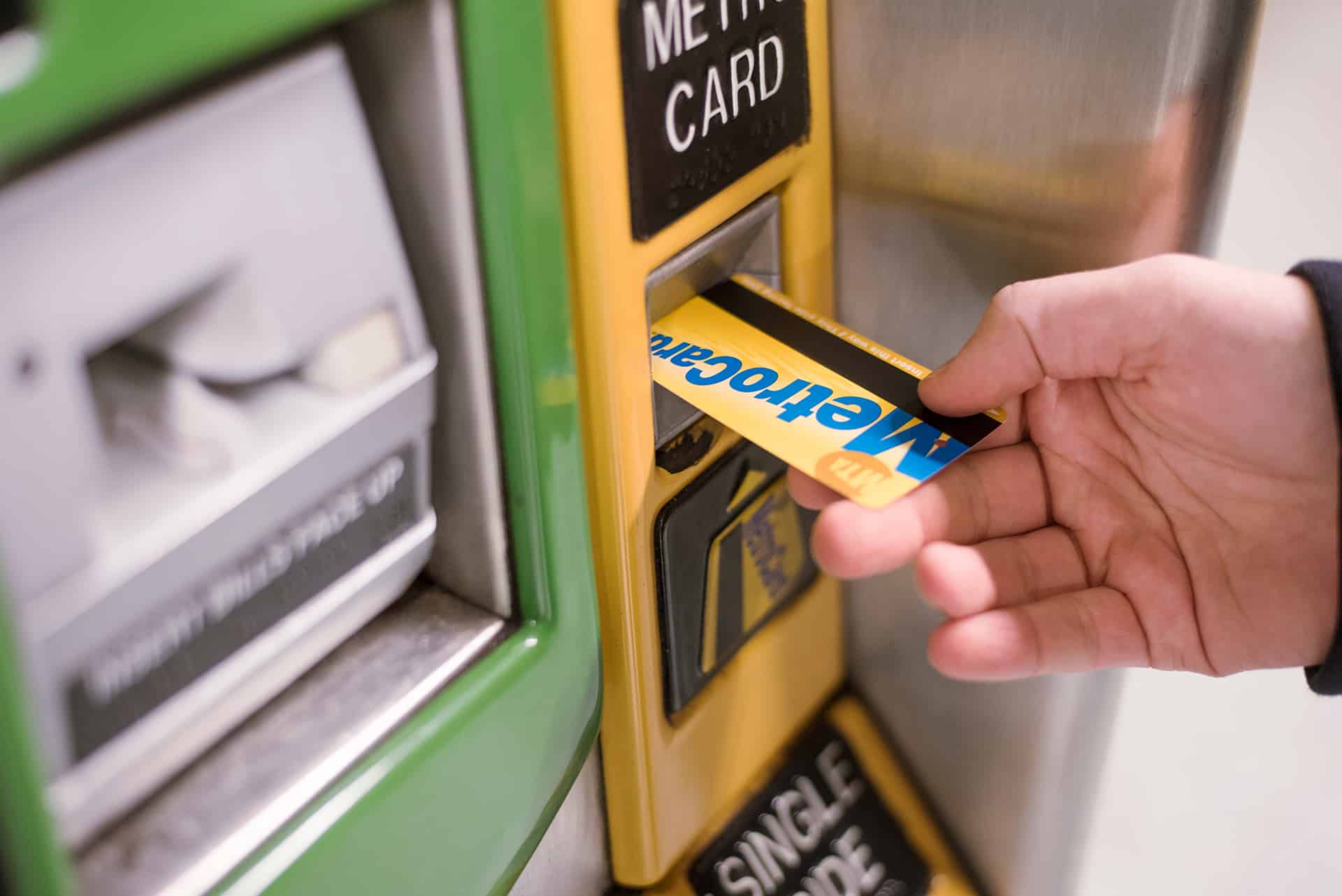 You can buy your ticket on the spot at most metro stations. At the entrance to the station, you will see a sign indicating whether a MetroCard can be purchased inside the station.

Kiosks are available everywhere, but the quickest way is often to use an automatic terminal directly, especially if you are not particularly comfortable with English. The kiosks allow you to take your time to do things properly, and you can even choose to have the information displayed in another language if you so wish.

To pay, you can use cash or your bank card. Note that the machines only give change up to $9 (£7), so you'll need to be careful. If you use your credit card, you can only buy 2 MetroCards per day. This limitation can quickly become annoying – and if you want to pay for your whole family, you will need to bring cash.

If you buy an unlimited MetroCard, its validity period will only start when you use it for the first time. So if your stay in New York is planned to last 2 weeks, you can buy 2 7-day cards at the same time, and use them one after the other, without worry.

As you can see, you will have to choose your formula according to the length of your stay and the number of times you will need to use the underground or the bus. For a visit to New York, the 7-day Unlimited MetroCard really seems to be the best choice. Just with one round trip per day for a week, it will already become profitable for you. If your stay is planned to last 3 weeks or more, the 30-day pass will probably be the most interesting.

And that’s it for this article on New York Metro! I hope I could help you 😊