Attending an NBA game is an experience to live at least once in your life! So if you don't know what to do in New York yet, well: know that you can attend an NBA game at... Madison Square Garden – a mythical venue in New York!

As such, if you ever have the chance to visit this place, don't hesitate! You will not only be able to see the greatest basketball players, but also hockey players as well as international singing stars (because yes, there are also big concerts organised in Madison Square Garden!).

Interested? Here is some information that will allow you to learn a little more about Madison Square Garden. This will help prepare your stay in New York in the best possible way. 😊

By the way, if you don't know when to go to New York and you absolutely want to see an NBA game – I obviously recommend going when the NBA season is open! 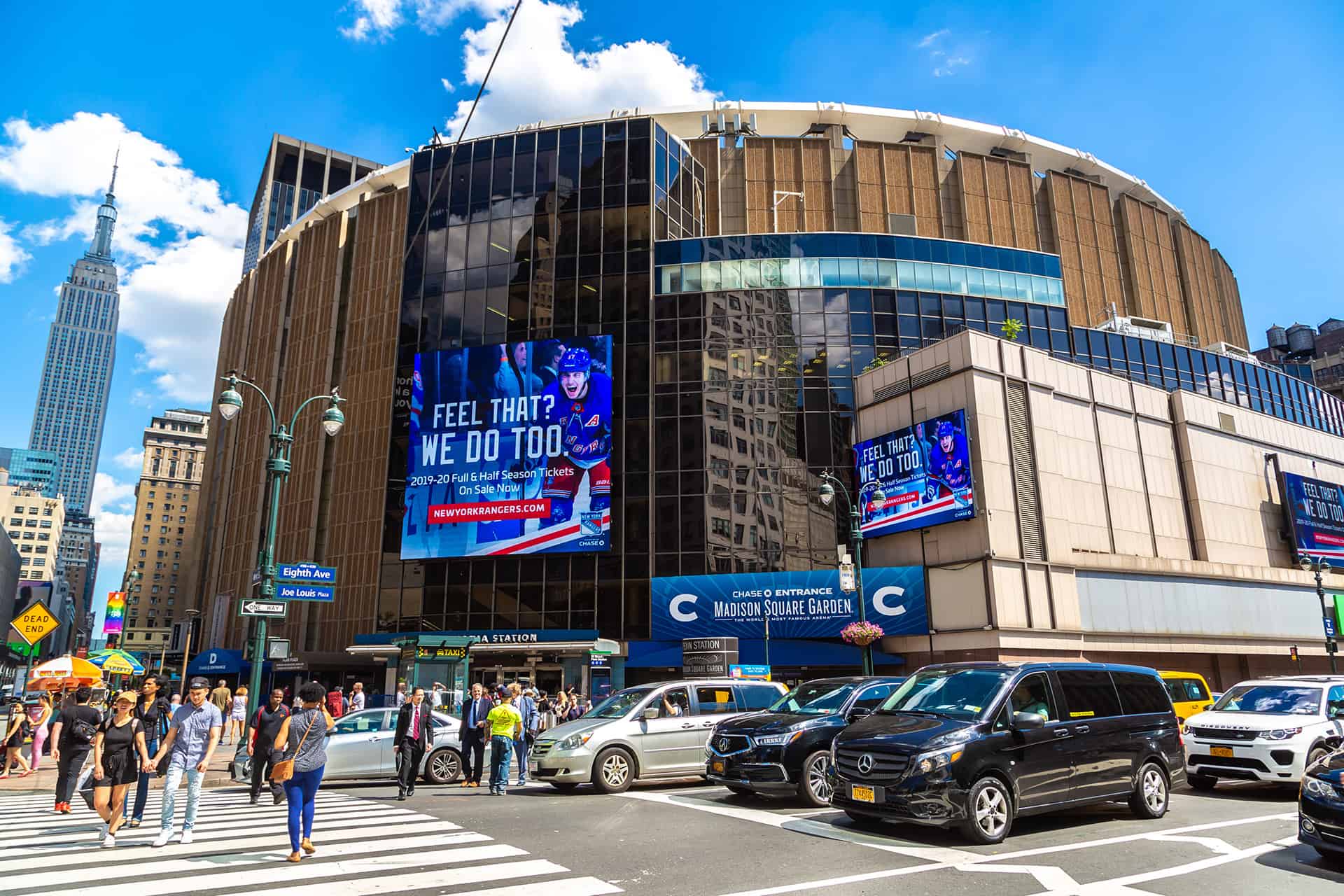 Madison Square Garden, also known as "The Garden" and MSG, is a huge complex located in New York City.

It hosts a variety of events including sports games, shows and concerts.

Historically, there have been four Madison Square Gardens:

The original venue was built for track cycling (on a former train station) in 1879 in Madison Square Park between Madison Avenue and 26th Street. It was demolished in 1890 to make way for a new building. Then the site was sold and converted into a racetrack. This is where the name Madison Square Garden comes from.

The new MSG was built on the same site 11 years later. It had 8,000 seats, but the building was sold and destroyed in 1924 to become the "New York Life Building", a skyscraper that houses a large American insurance company.

NB: The architect who designed it, Stanford White, was murdered on the roof in 1906 by a jealous husband.

On 15 December 1925, a new Madison Square Garden opened at the corner of 50th Street and 8th Avenue. It could accommodate more than 15,000 spectators.

As an aside, the Barnum & Barley circus was so successful there that it stole the limelight from the Rangers team – such that they were unable to play many games there.

The venue was demolished in January 1941 and replaced by two skyscrapers (which now form the "One Worldwide Plaza").

The current MSG was opened on 11 February 1968. It is located on 7th Avenue just above Pennsylvania Station.  It has been dubbed "The World's Most Famous Arena".

If you want to visit this emblematic and magnificent building, you should do so as soon as possible. Firstly, because many visitors come to see it every day. It would be a pity not to be able to enter because the maximum capacity is reached, or because the queue outside is endless!

Secondly, the venue hosts many sporting, cultural and political events, so you won't be able to enter the venue whenever an event is planned or underway. The availability is regularly updated to help prospective visitors know at what date and time it is possible to visit. 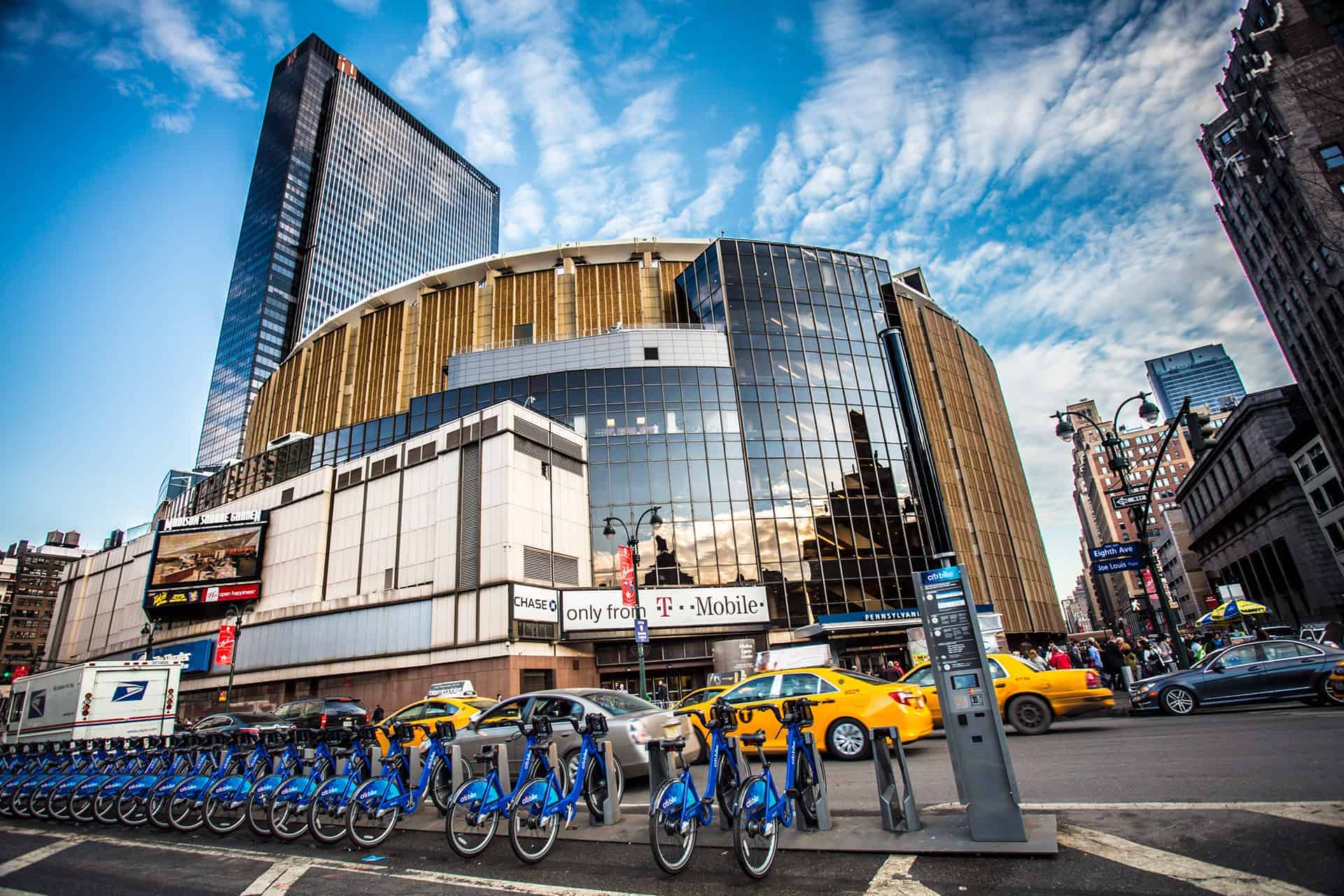 This large building with a concave ceiling (for better acoustics) is a multi-purpose arena. Thanks to modern facilities, its configuration can be changed according to the event that will take place there. The large hall can be transformed into a basketball court (with a parquet floor), an ice rink (under the parquet floor) or a concert hall. More than 320 events are held there every year.

Madison Square Garden is also the home of the New York Knicks basketball team, which plays in the NBA; as well as of the New York Rangers ice hockey team (these teams are owned by the company that owns the MSG).

The Garden IV also houses a cinema, a theatre (The Hulu Theatre), meeting rooms and a restaurant.

The company that owns the MSG – "Madison Square Garden, L.P.", a subsidiary of "Cablevision" – plans to build a new multipurpose hall in the near future.

The venue will be more comfortable for spectators and will house more restaurants and shops.

SOME KEY FIGURES ABOUT THE MSG

Madison Square Garden has a capacity of:

Where is MADISON SQUARE GARDEN ? 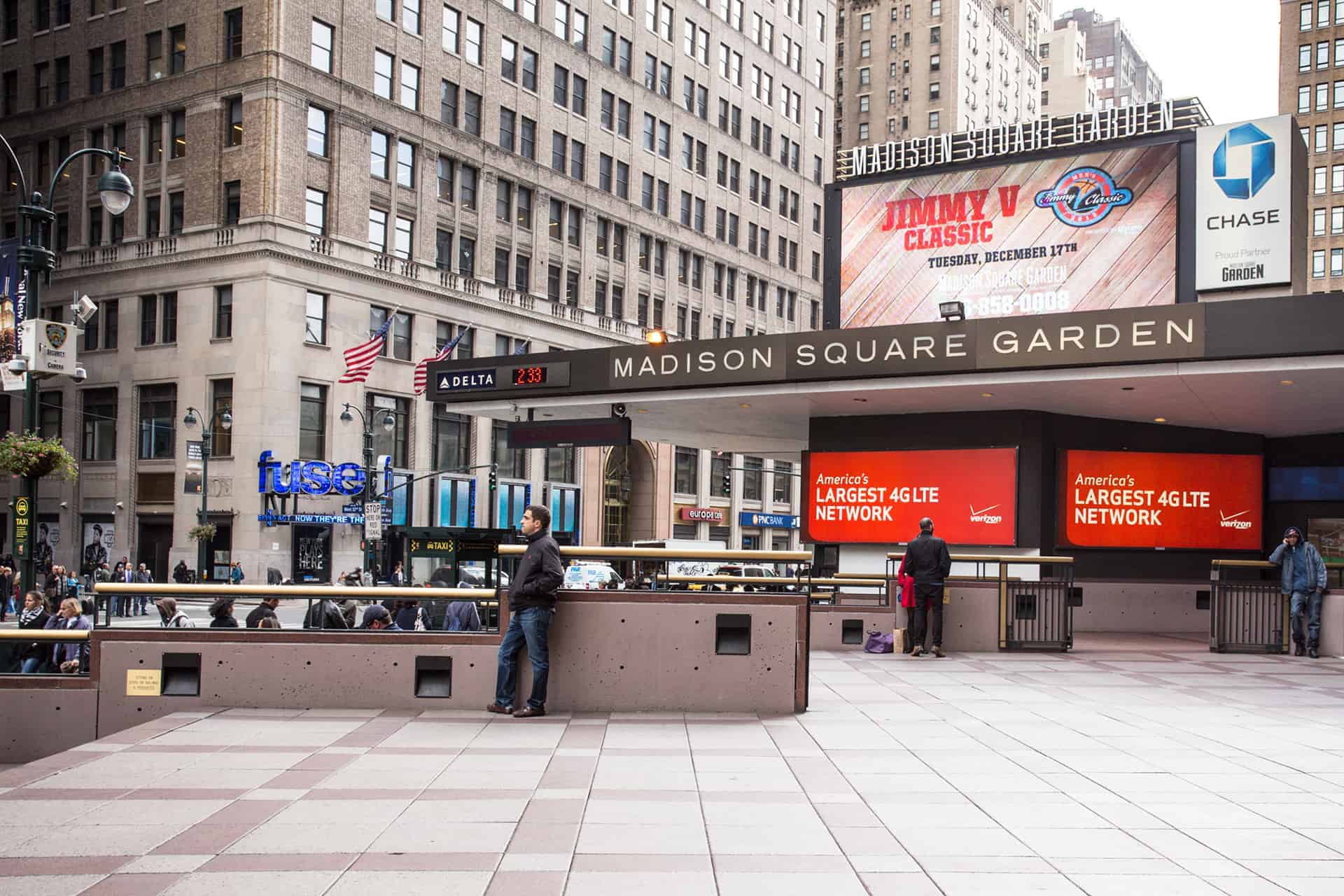 It's simply impossible to miss Madison Square Garden! This cylindrical building is located in the heart of Manhattan, in Midtown to be precise.

The main entrance is between the 7th and 8th Avenues on one side, and the 31st and 33rd Streets on the other.

The exact address is:

How to get there ?

The easiest way to get to the MSG is by underground. Just take:

What are the opening hours ?

Guided tours, called the Madison Square Garden All Access Tours, run daily from 9:30 am to 3 pm.
Tours run every half hour.
On match days, these tours only run between 12:15 pm and 3 pm.

Please note that times may change depending on events at the MSG. There may also be no tour, so please check the calendar on the official MSG website.

Allow 1 hour and 15 minutes for a full tour of the complex. You will be able to see the match area, the show area, the theatre and the backstage area.

The tour is in English (though booklets with explanations in other languages are available). The guide will give you a lot of information about the building and its history. They will also tell you about important events and incredible anecdotes.

On top of that, you will be given a tour of the team changing rooms and the trophy room. You will also be able to see the private suites and the VIP Club Bar & Grill. Finally, you will be able to take part in a virtual reality experience.

Where to buy tickets ?

You can buy tickets at the Madison Square Garden box office in the lobby (open Monday to Saturday from 10 am to 6 pm; and if a show is on a Sunday: from noon).

If there is space, you can attend the next tour; if not, you will need to make a reservation for a tour in the next few hours or days. Note that you will have a better chance of getting in on the day you came by going to the ticket office in the morning, starting from 9 am.

You can also buy tickets online, you will have to choose the day of your visit, the number of people, then pay. You will receive a voucher in your email which you can print out or keep on your phone and present at the ticket office on the day of your guided tour.

Please note that when you book online, you will be asked for a tentative date. However, if you are unable to attend on that day, you can do so on another day of your stay, as the tickets are valid for one year from the date of purchase.

WHAT IS THE ENTRANCE FEE?

Here are the entrance fees for the guided tour of the MSG:

Are there any good deals?

Yes, a visit to Madison Square Garden is included in many New York passes :

TO FIND OUT MORE ABOUT THESE PASSES, CLICK HERE

WHAT TO SEE AT MADISON SQUARE GARDEN?

Great boxing matches have taken place at the MSG. Some people have even been able to attend The Fight of the Century, which saw Muhammad Ali and Joe Frazier fight on 8 March 1971 (Muhammad Ali's first defeat).

Some fights are still held there, but the most important ones are held in Las Vegas. 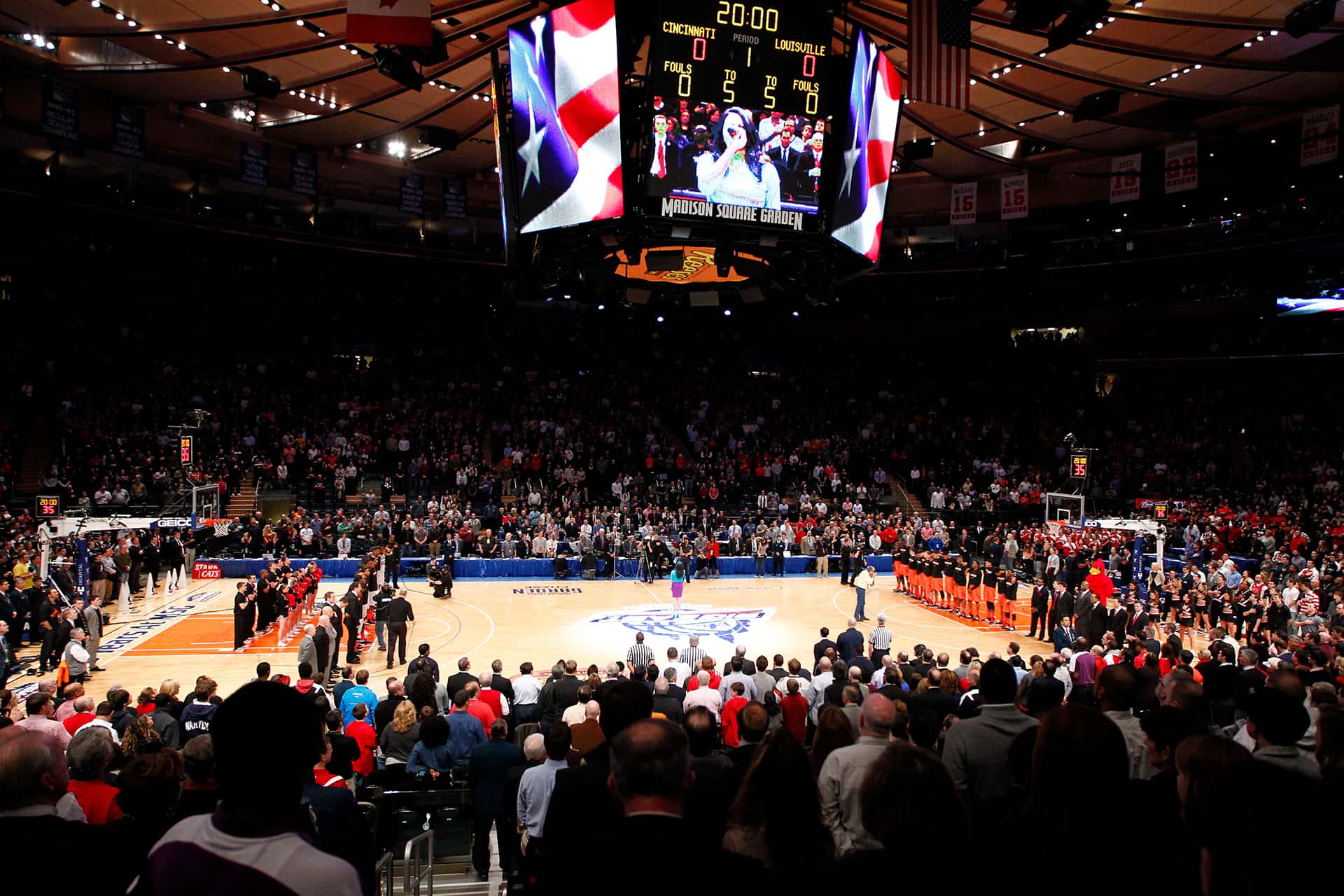 Currently, the most important sporting events taking place at the MSG are those of the teams it houses:

Going to see an NBA game at the MSG is an unforgettable experience! Especially when it's the NBA All-Star Game! But beware: check the stadium's schedule first if you really want to see an American basketball league game, as tickets go very quickly.

Basketball games usually take place from October to April. Pre-season games are played from the end of September and the NBA play-offs until the end of May.

The women's basketball season runs from May to September.

On D-day, try to arrive 40 minutes to an hour before the start of the game so that you have time to clear security, find your seat, buy food and enjoy the pre-game show. You will be able to watch the cheerleaders, listen to the marching bands, the national anthem and see the training and presentation of the players.

You will also notice that there are breaks between the matches with the kiss cam and celebrity cam shows.... Maybe you will be filmed 😉 Additionally, most of the events are broadcasted on TV.

Where can I buy tickets for the NBA games?

You can buy them on site at the box office, or online.

Note that last minute tickets (when there are any left) are expensive and often very badly priced! So book as early as possible: you will have more chances to find a good seat at a good price. Again: tickets sell out fast and the "New York Knicks" and "New York Rangers" games are often sold out!

In any case, avoid scalpers (you can never be sure that the tickets are genuine!)

Instead, opt for e-tickets (electronic tickets). They are more secure and you will only have to present the QR code of your ticket with your smartphone! This will also save you the cost of postage to your home.

What could be a good deal? Owners of year-round seats can sublet their seats. 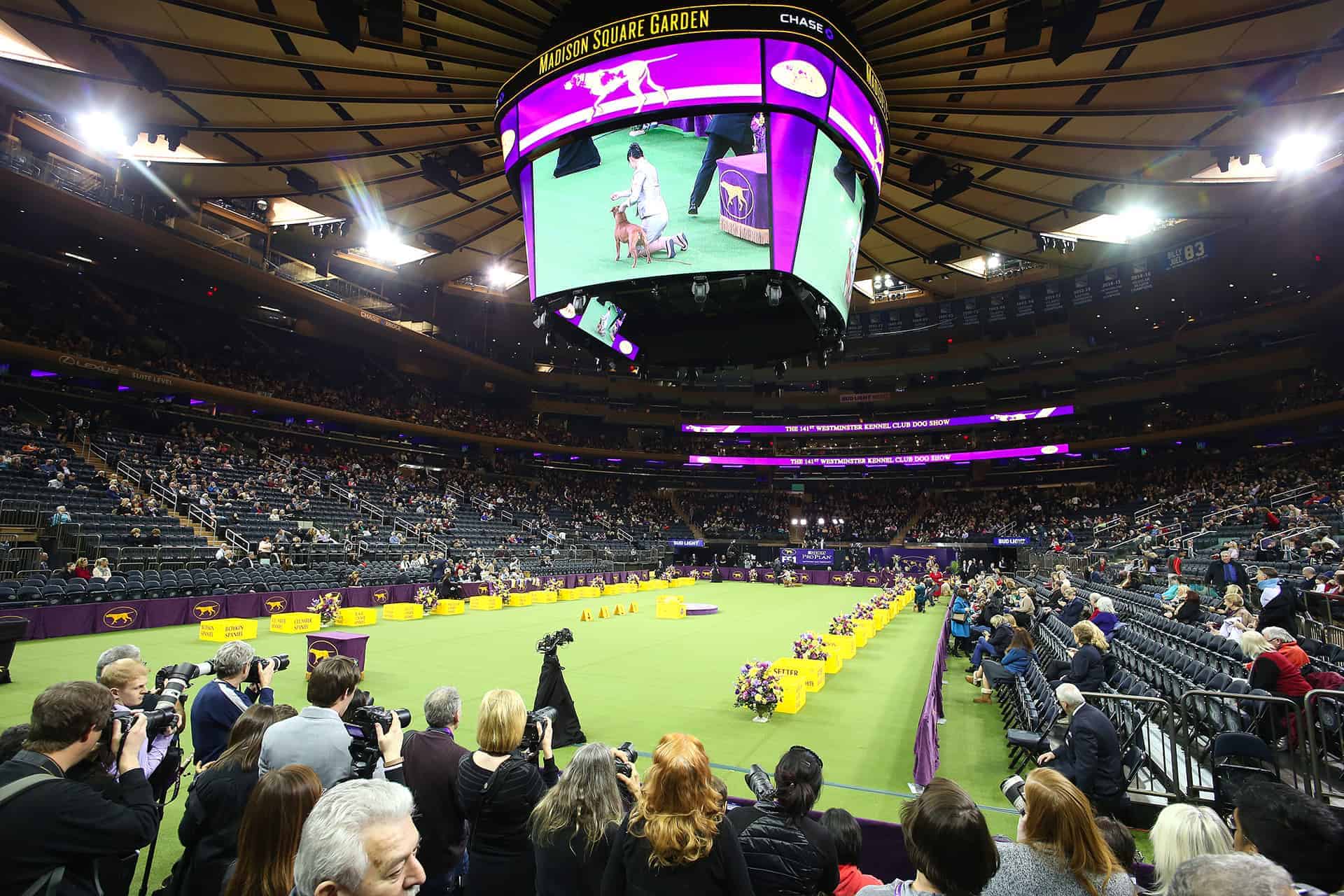 Spectators have also been able to attend numerous performances by the Cirque du Soleil.

Where to buy tickets for these shows?

To attend a show, it is best to buy tickets online at the official MSG website. You will then be redirected to Ticketmaster.com (an easy-to-use website). You can choose the number of tickets, your seat and pay securely.

In the past, political meetings have been scheduled at the Garden. For example, the Republican Convention led by George W. Bush in 2004.

Historic visits to the Garden include Pope John Paul II in 1979 and Pope Francis in 2015.

You can't bring your own food. However, there are sandwich vendors that rotate in the stands during the games. There is also a restaurant with contemporary American cuisine (The Grill Room at Madison Square Garden) and many food stalls within the grounds of Madison Square Garden: The Pasta Kitchen, Top Dog (hot dogs), Fratelli's Beretta (Italian food), Bouchon Bakery (pastry)...

Is there a souvenir shop?

You can buy jerseys, caps and souvenirs at the Chase Square Team Store.

Can I take pictures?

You can bring your camera with you, but professional equipment is not allowed (large lenses, laptop...)

Is there luggage storage?

You can bring your personal belongings in a small bag, but you will have to keep it with you, as there is no locker service at the MSG.

The complex is accessible to people with reduced mobility. Accompanying animals are allowed.