WHAT TO DO AND SEE IN NEW YORK IN DECEMBER?

New York is the third most visited city in the world, after Paris and London. If there is one time during which this great metropolis attracts a huge number of visitors, it is during the holiday season. If you're planning to visit New York in December, you're probably wondering what major activities you will be able to do during your stay, what the weather will be like, how high the budget will be, and how busy this tourist season is. Good news! You'll find the answers to these questions in the following 😉

If you are travelling to New York in December, be sure to bring warm clothes with you – it can get quite cold! December is one of the coldest months of the year, with temperatures averaging between 0°C and 8°C during the day. 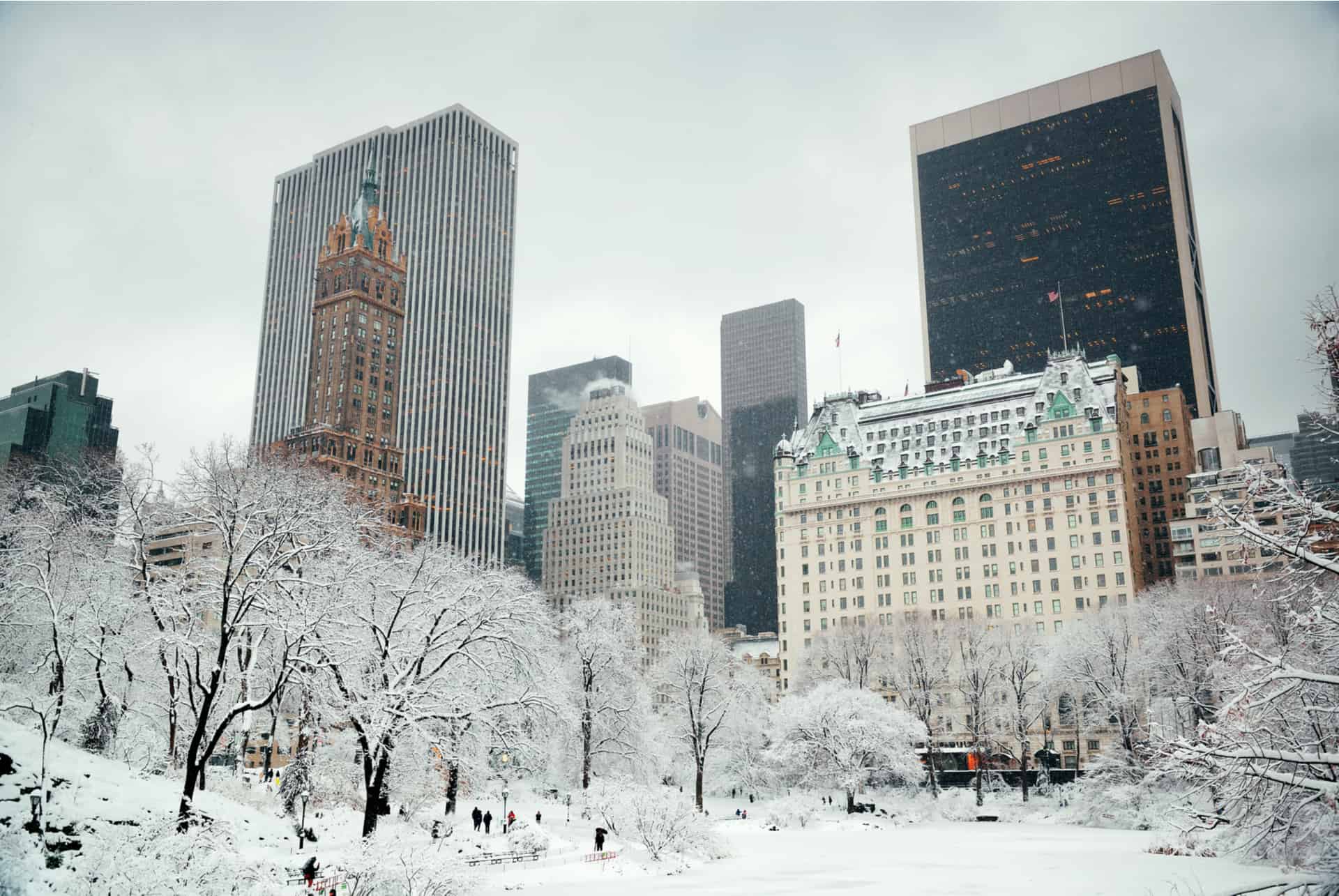 Winters in New York are cold and harsh, and on some days the thermometer can drop below -10°C. Most of the time, the sun will be out even if the days itself are short (about 9 hours between sunrise and sunset). It rains quite often, as it does all year round in New York, and it snows quite regularly.

As you can see,  the weather conditions in New York in December aren’t the best, but as we shall see soon – if so many visitors come to discover the Big Apple during the last month of the year, it is certainly not to sunbathe on the beach.

WHAT TO DO AND SEE IN NEW YORK DURING DECEMBER?

Before checking which activities are available only during this month, it's important to keep in mind that you will also be able to discover all of the city's must-sees sites, even in the middle of December. 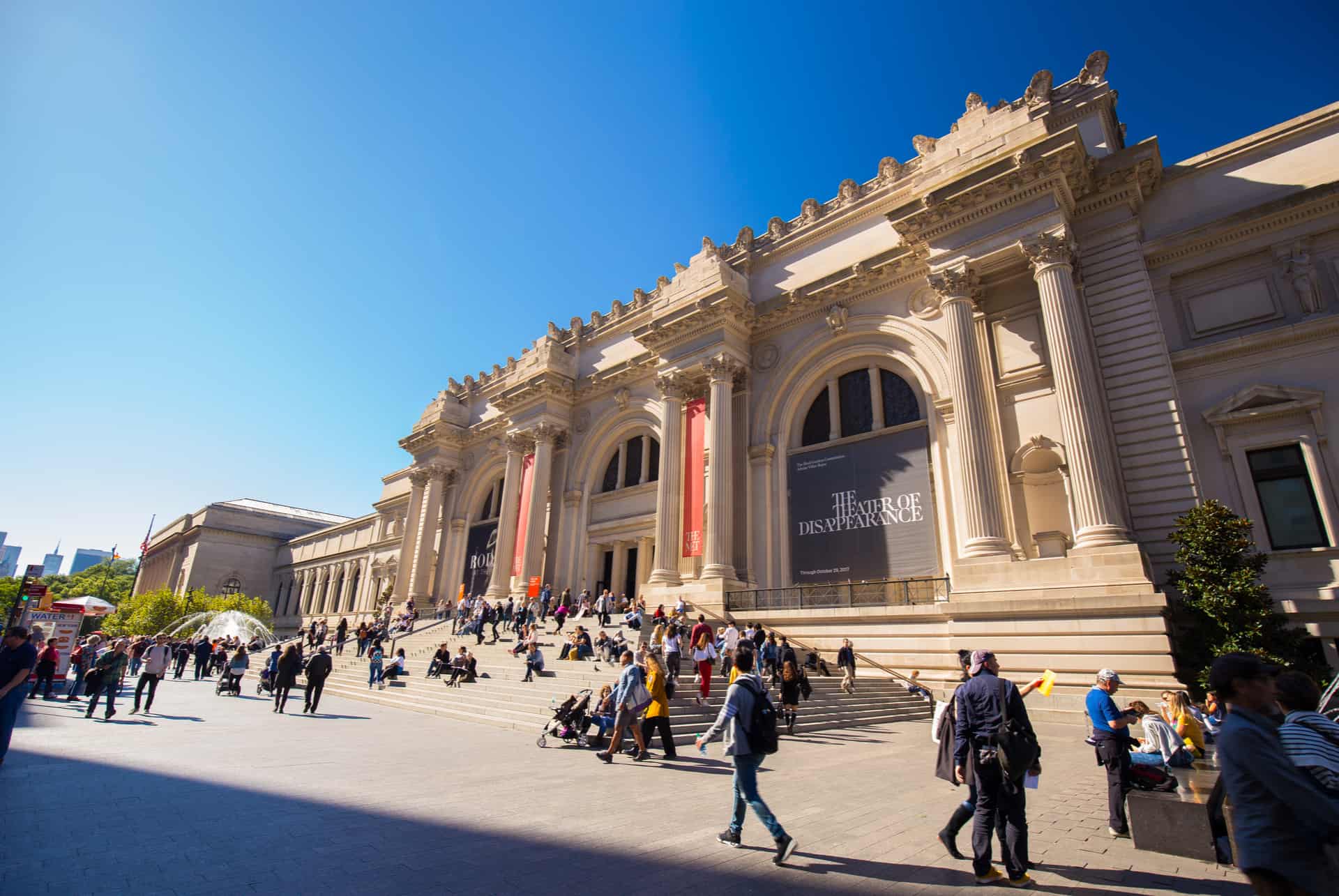 To warm up on a particularly cold day, for example, you can visit all the major museums in New York such as the Met, MoMa, Guggenheim Museum and many others – and why not warm up your evenings by discovering a Broadway musical?

You'll also have the opportunity to see and visit some of the Big Apple's most famous landmarks, such as the Brooklyn Bridge, the Statue of Liberty (thanks to the Staten Island Ferry ), and Grand Central Terminal.

And of course, even if you really do need to remember to cover up well, you can also go and admire New York from the heights of some of the city's tall buildings, where very famous panoramic observation platforms can be found : The Top of the Rock, the Empire State Building, the Summit One Vandervilt…

TO SEE ALL THE THINGS TO DO IN NEW YORK, CLICK HERE

But let's take a closer look at some of the major events and visits you should definitely make during a stay in New York in December.

This is an absolute must-do December activity in New York! You can visit a multitude of Christmas markets throughout Manhattan and the rest of the city:

Some of these markets are traditional and feature many artisans while others are more modern, but one thing is for sure – you will definitely enjoy the great Christmas atmosphere of New York City during these holidays, and find plenty of souvenirs to bring back from your trip.

If you wish to discover most of the city’s must-do activities during your stay in New York, I can recommend the purchase of a New York City Pass. This tourist pass will give you several advantages throughout your stay – among which, access to 5 of the city’s main tourist sites. You will also be able to pick your favourite activities in the list (2 fixed activities + 3 activities to pick) 🙂

New York's department stores spend the whole year preparing their Christmas windows. More than mere decorations, the scenes created are often true works of art – and miniature theatre stages. In the city's shopping streets, and especially on 5th Avenue, you can discover these superb scenic creations in the windows of Macy’s, Tiffany’s, Bloomingdale’s or Saks Fifth Avenue. Of course, all of these shows are completely free, and you can watch them from the street. 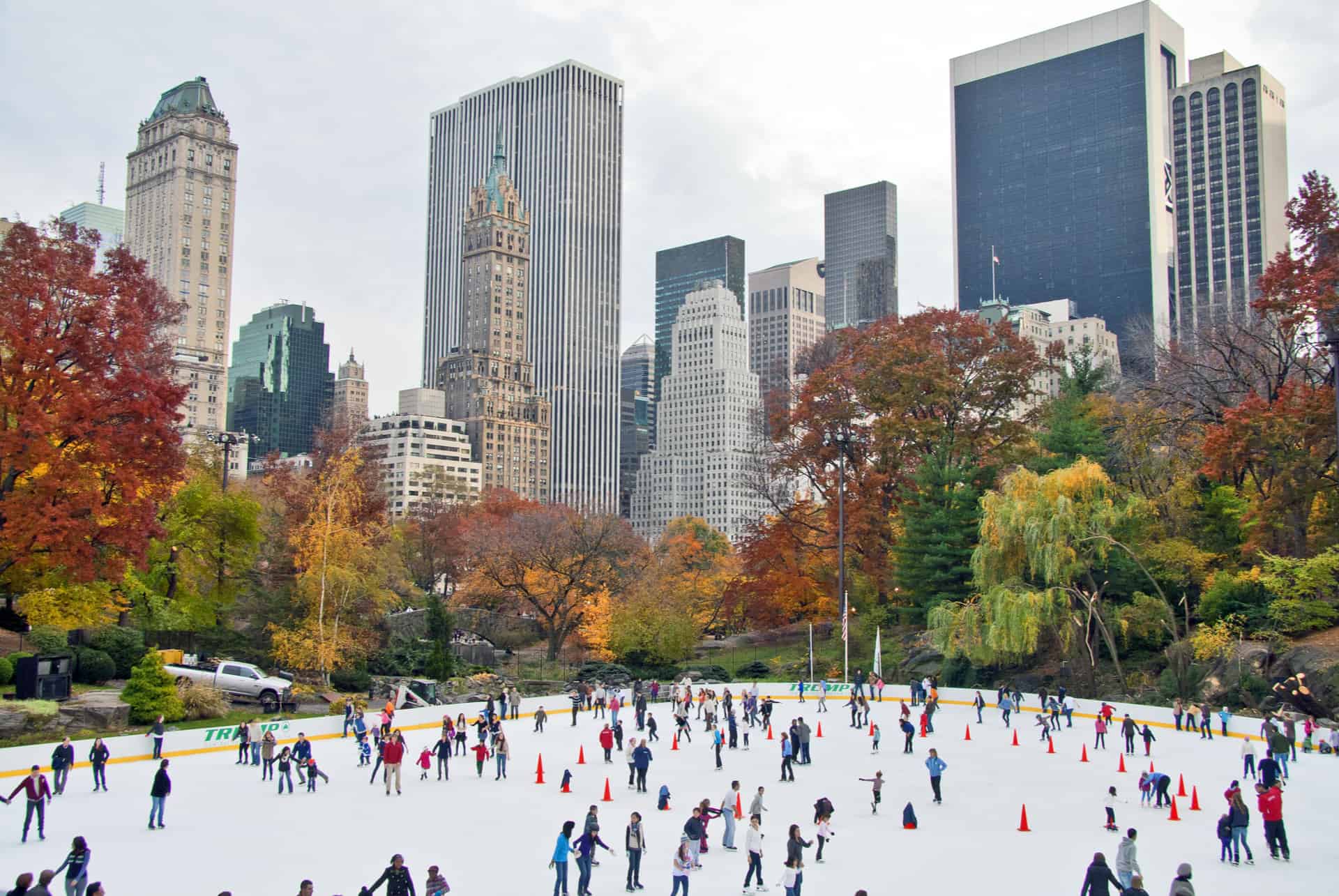 December is also the perfect time to go ice skating at New York's great rinks. The two most famous are the Rink at the Rockefeller Center, right next to the famous Christmas tree; and the Wollman Rink, in Central Park.

ADMIRING THE FACADES OF DYKER HEIGHTS

In the United States, decorating your home for Christmas is not something you do half-heartedly. And if you want to see how seriously some people take it, you need only to go to Dyker Heights during the Christmas season. In this Brooklyn neighbourhood, residents compete to make the most impressive Christmas decorations. 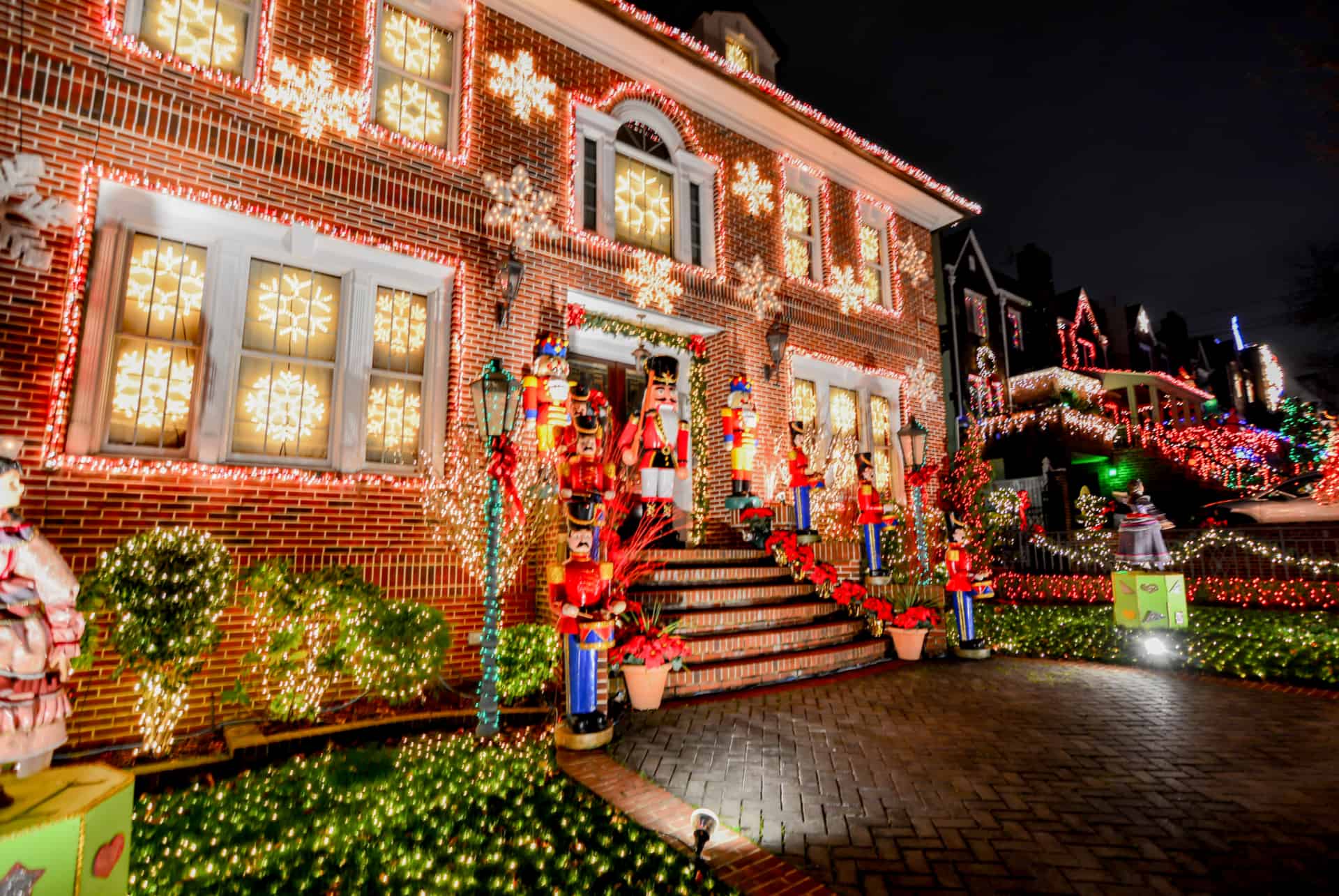 No surprise – every year, this neighbourhood is voted best decorated neighbourhood in the country, and visiting it has become one of the most iconic attractions in New York at the end of the year.

To discover these Christmas lights in comfort, I recommend taking a guided bus tour of Dyker Heights. You can book your place by clicking on the button below.

BOOK YOUR GUIDED TOUR OF DYKER HEIGHTS BY CLICKING HERE

Every year, the eighth floor of one of the world's largest department stores is transformed into a true Christmas village in New York. From the last week of November until Christmas Eve, nearly 200,000 visitors come to discover this magical setting, which includes Santa's workshop, a forest, a rainbow bridge, a large reindeer-drawn sleigh and many other surprises. 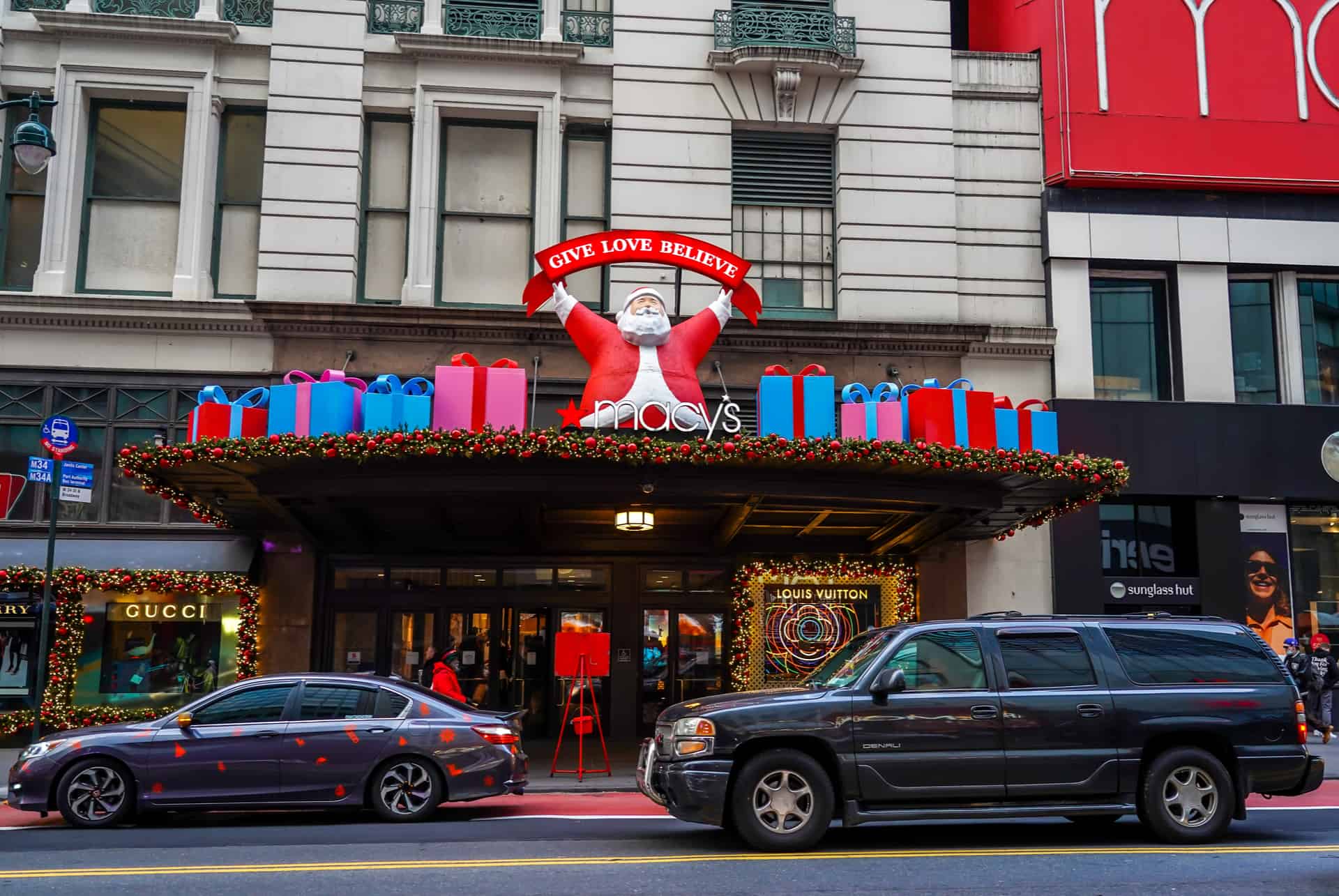 Macy’s Santaland is a unique place, and not to be missed if you are travelling with children. Admission is free, but since Santa is particularly busy in December, it is necessary to book your tickets online before your visit. These reservations can be made on the day of your visit, or up to 5 days in advance.

If you are already in New York on 1 December, you will be able to witness the lighting of the world's most famous Christmas tree, at the foot of Rockefeller Center. The tree is normally put up in mid-November, but its 30,000 lights are not lit until early December.
Every year, this ceremony, which starts at around 7 p.m., attracts several thousand spectators. 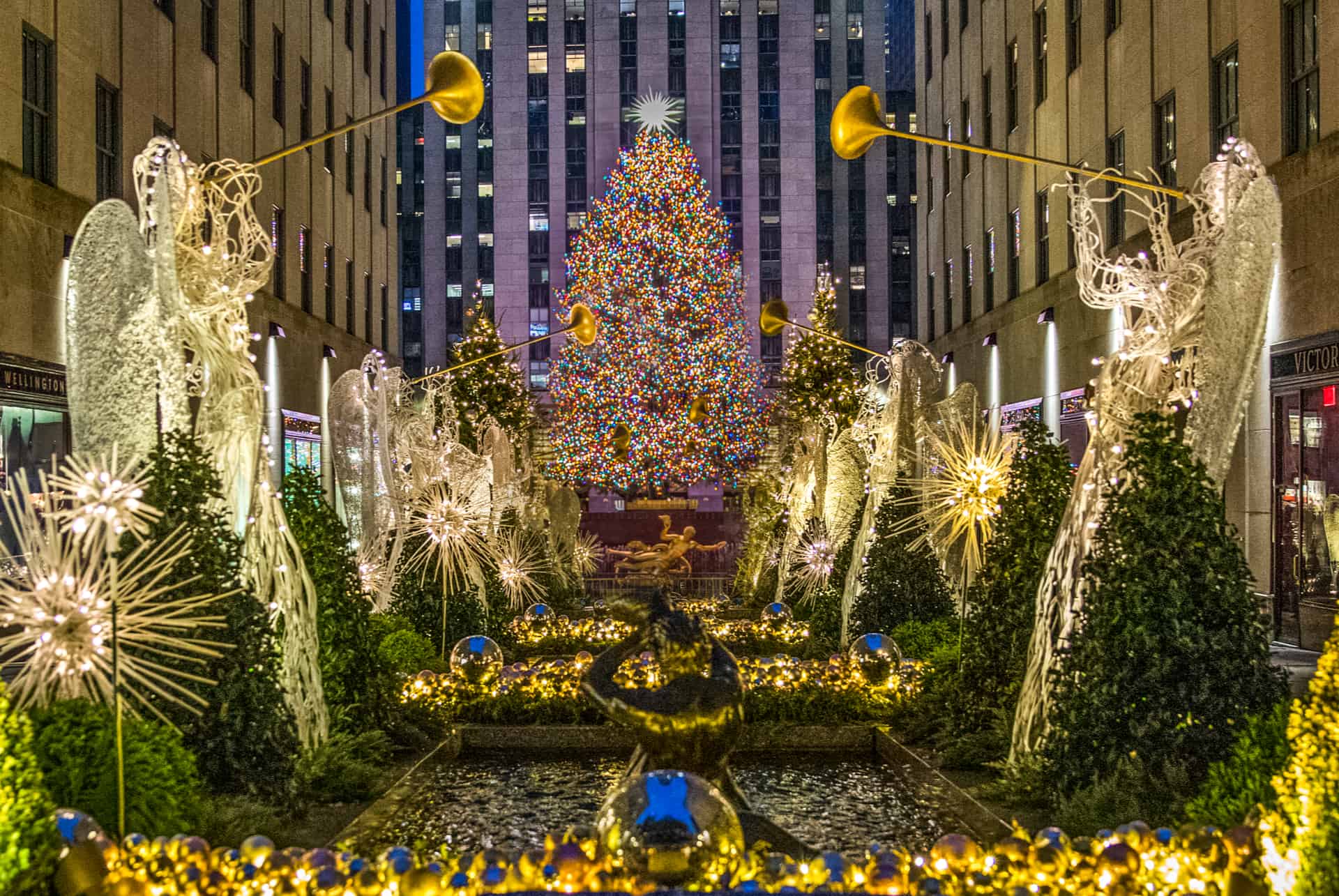 It is possible to attend the ceremony for free – but only the first to arrive will be given a seat!

Of course, even if you weren’t able to attend this ceremony, seeing the tree at the Rockefeller Center is still one of the most popular attractions during the month of December.

GOING TO NEW YORK IN DECEMBER: IS IT REALLY A GOOD IDEA?

To conclude this post, I'd like to give you a quick summary of the advantages and disadvantages of a trip to New York in December, to help you decide if this trip will really meet your expectations.

The disadvantages are as follows: 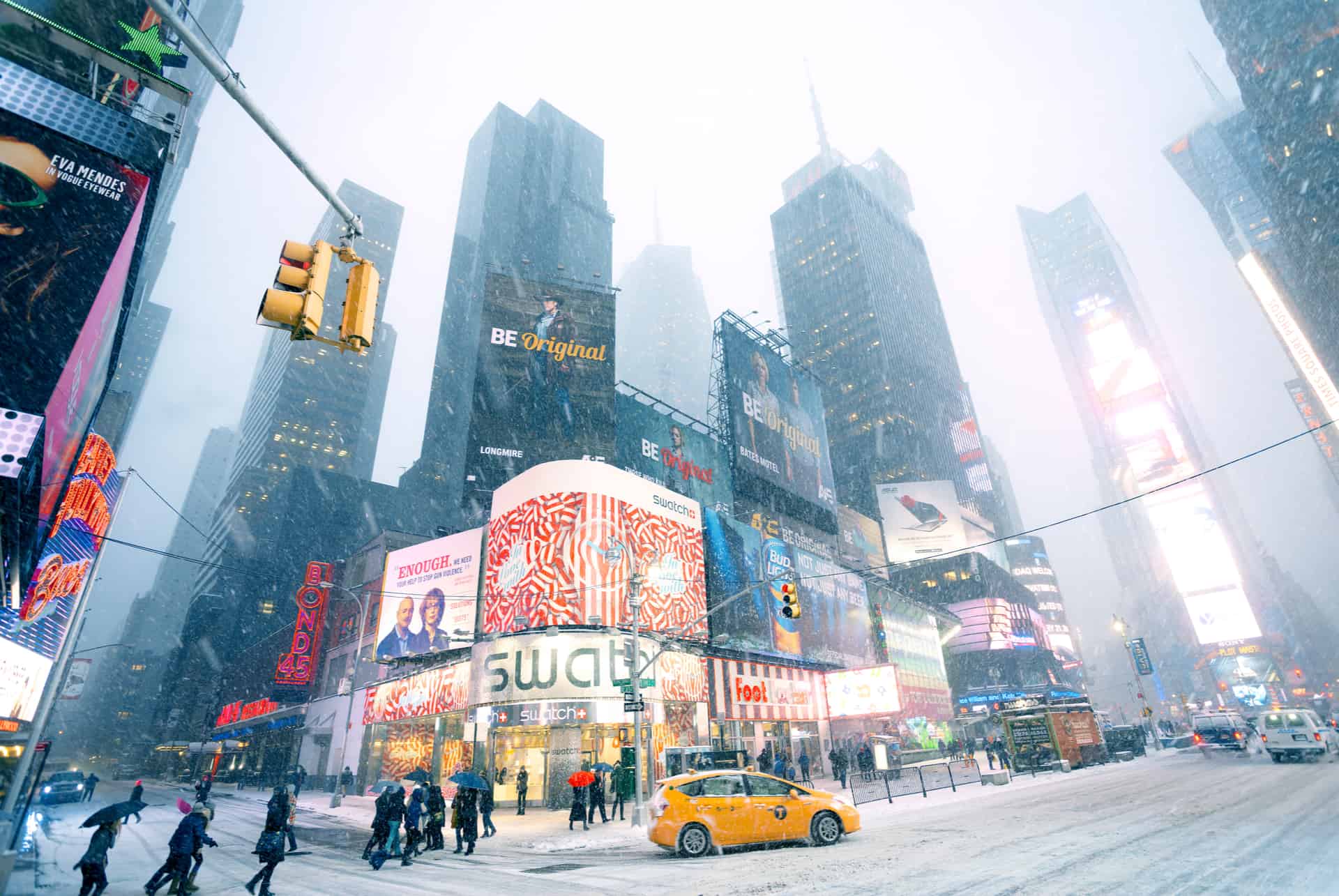 If these few inconveniences do not prevent a great number of travellers from coming to New York in December, it is because the advantages are also numerous: 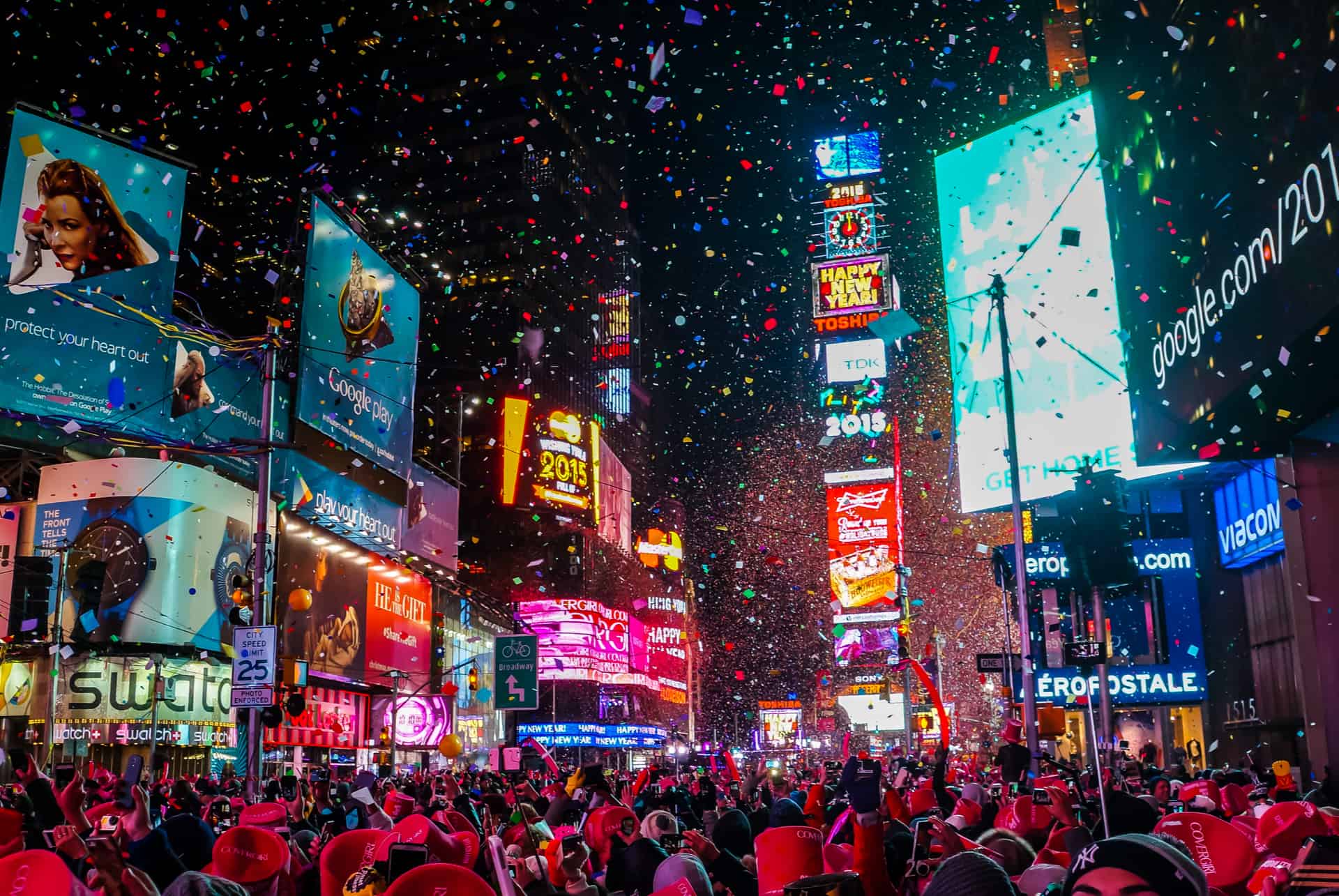 I hope this article was of some help to you. And don't hesitate to read my article New York in January if you end up deciding to visit the Big Apple at a later date! 🙂