Upper West Side – a neighbourhood to visit

The Upper West Side is a New York district located between the Hudson River and Central Park, in the northwest of Manhattan. This very pleasant neighbourhood, mainly residential, is also very active culturally, thanks to the presence of Columbia University, among others.

In the following lines, I am going to present this very singular New York neighbourhood in a little more detail, so as to give you a glimpse of what you will discover if you decide to visit the Upper West Side. 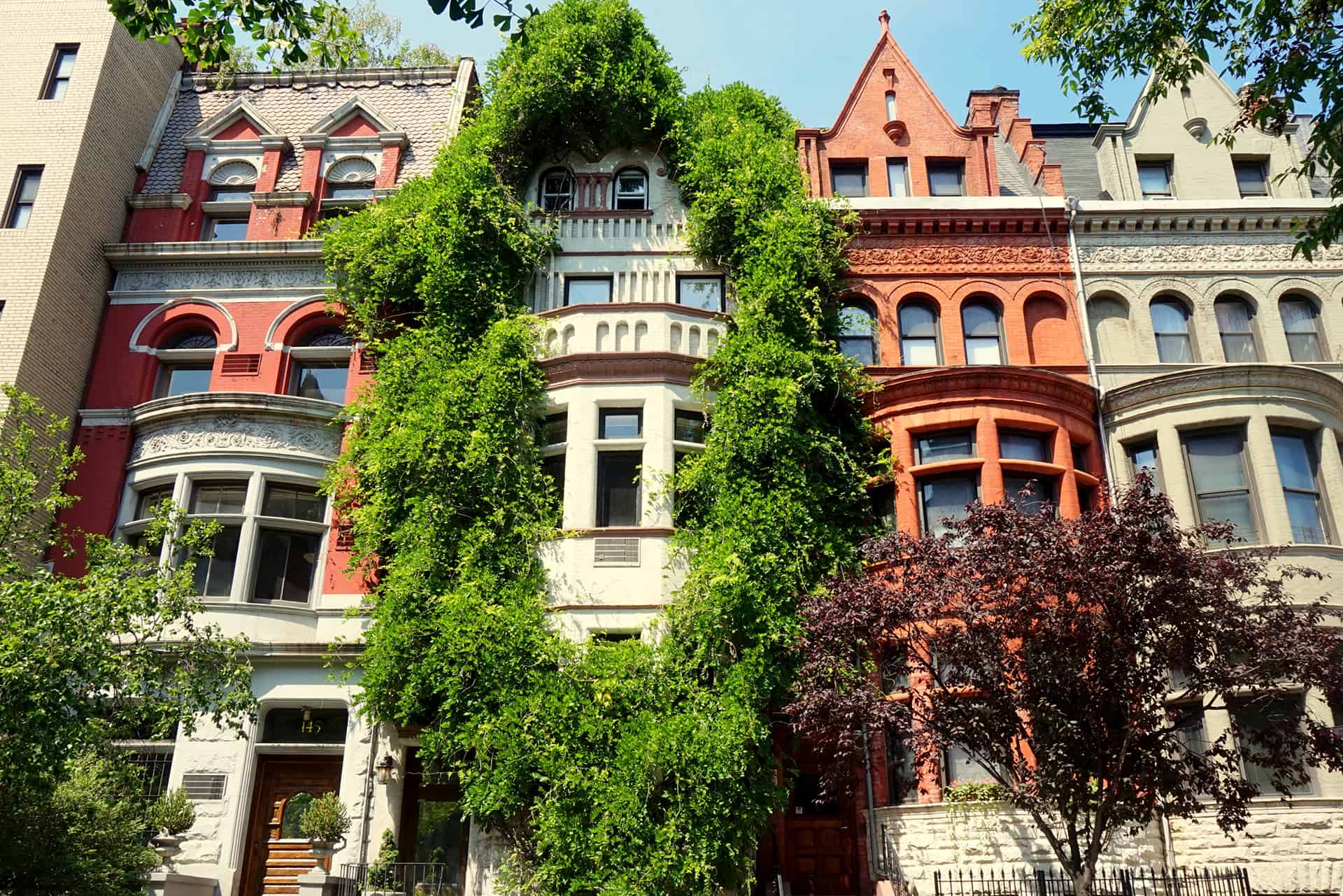 The Upper West Side neighbourhood  is a very charming New York district, where you can enjoy a quiet and relaxed atmosphere, but also discover the brownstones – those Victorian style houses, made of red or brown sandstone, are very emblematic of New York.

Some of the neighbourhood's streets and avenues, especially those along Central Park, are now home to some of Manhattan's most prestigious buildings. The Dakota Building, a magnificent Renaissance Revival building on 72nd Street, is known for having been the home of popular artists such as John Lennon, Lauren Bacall and Judy Garland. There are also several other sumptuous residences on the streets of this neighbourhood, such as the San Remo Apartments, the Beresford and the Ansonia.

The Upper West Side is also an area of the city with a strong cultural and educational focus.

It is home to Lincoln Center, one of New York's largest cultural centres, as well as some of the city's major museums and the highly renowned Columbia University.

The American Museum of Natural History

Arguably the most famous place on the Upper West Side, this museum is one of the largest in the world. If you are visiting New York, you should definitely take the time to explore the AMNH. It is open every day of the year except Thanksgiving Day and December 25.

The American Museum of Natural History is best known for its fossils and representations of dinosaurs and mammals from every continent. Each year, 5 million visitors come to see its ethnological and natural history collections – which include more than 32 million objects and specimens in 45 permanent exhibits.

As the museum is very busy throughout the year, I invite you to book your tickets as soon as possible so that you can relax during your stay and discover this place without any stress 🙂

TO FIND OUT MORE ABOUT VISITING THE MUSEUM, CLICK HERE

The Lincoln Center for the Performing Arts is a central location for the arts in New York City. This complex, which covers more than 6 hectares, brings together several theatres, performance spaces and schools – including the Metropolitan Opera House, the David H. Koch Theater, the Vivian Beaumont Theater, the Juilliard School and the School of American Ballet.

A dozen companies are present throughout the year. In all, more than 400 artistic performances are scheduled each year, attracting nearly 5 million visitors.

The Lincoln Center is a must-see on your trip to New York, especially if you want to discover theatre, music and dance performances, on top of an architectural landmark. 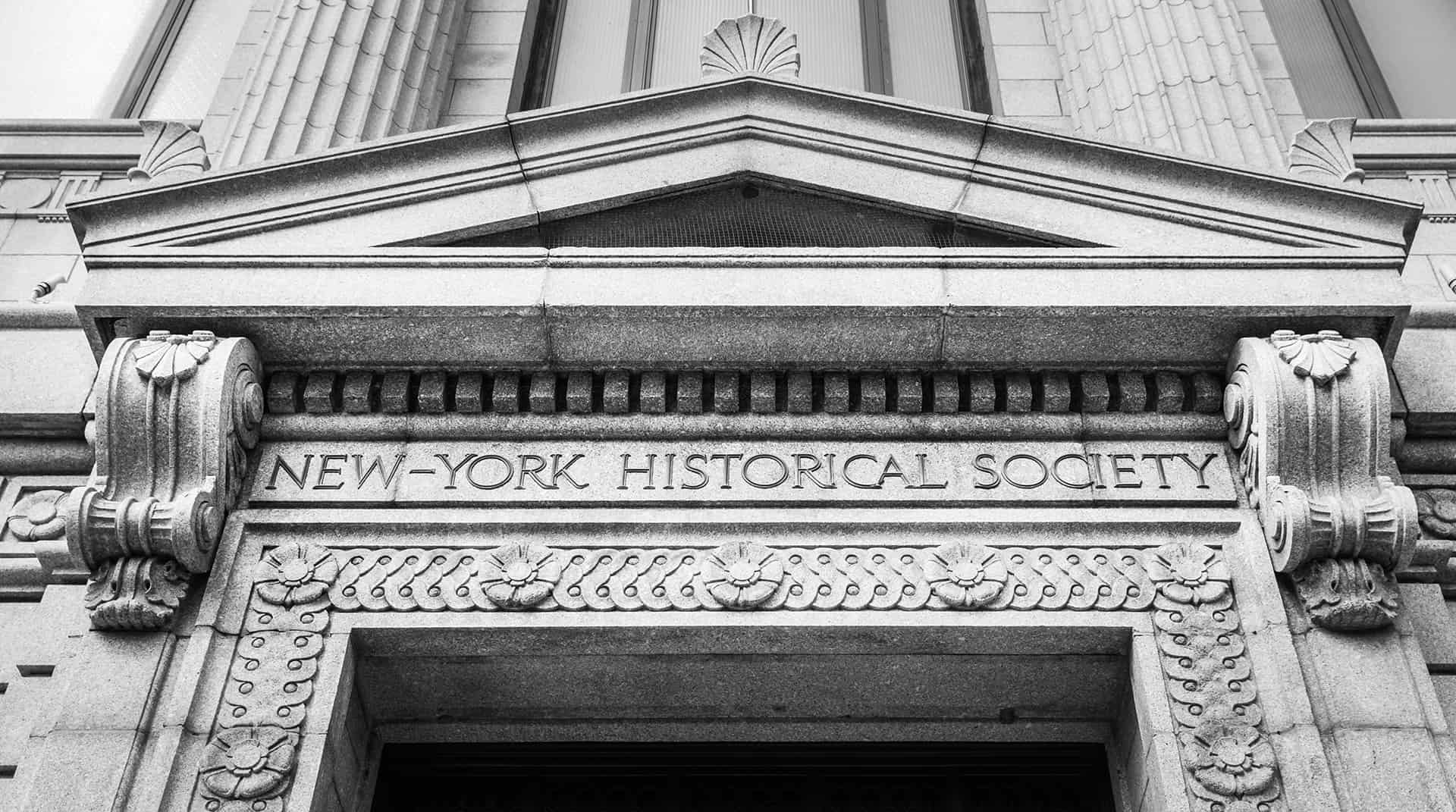 If you want to learn more about New York City’s history and culture, I recommend spending an hour or two exploring this unique museum on the Upper West Side.

The collections in the New York Historical Society Museum highlight the city's rich history as well as its influence on the world today. Approximately 800 works from the colonial era to the present day are on display, allowing visitors to discover much more about New York's history, society and culture.

Located on Broadway, Symphony Space is one of the neighbourhood's most important cultural venues. More than 600 events are scheduled each year in this multidisciplinary cultural centre’s two auditoriums.

Dance, music, theatre and film are in the spotlight, and some of the country's most popular podcasts are also regularly held in public in the cultural centre. It's one of the places in the neighbourhood where you're almost guaranteed a great night out if you're fluent enough in English. 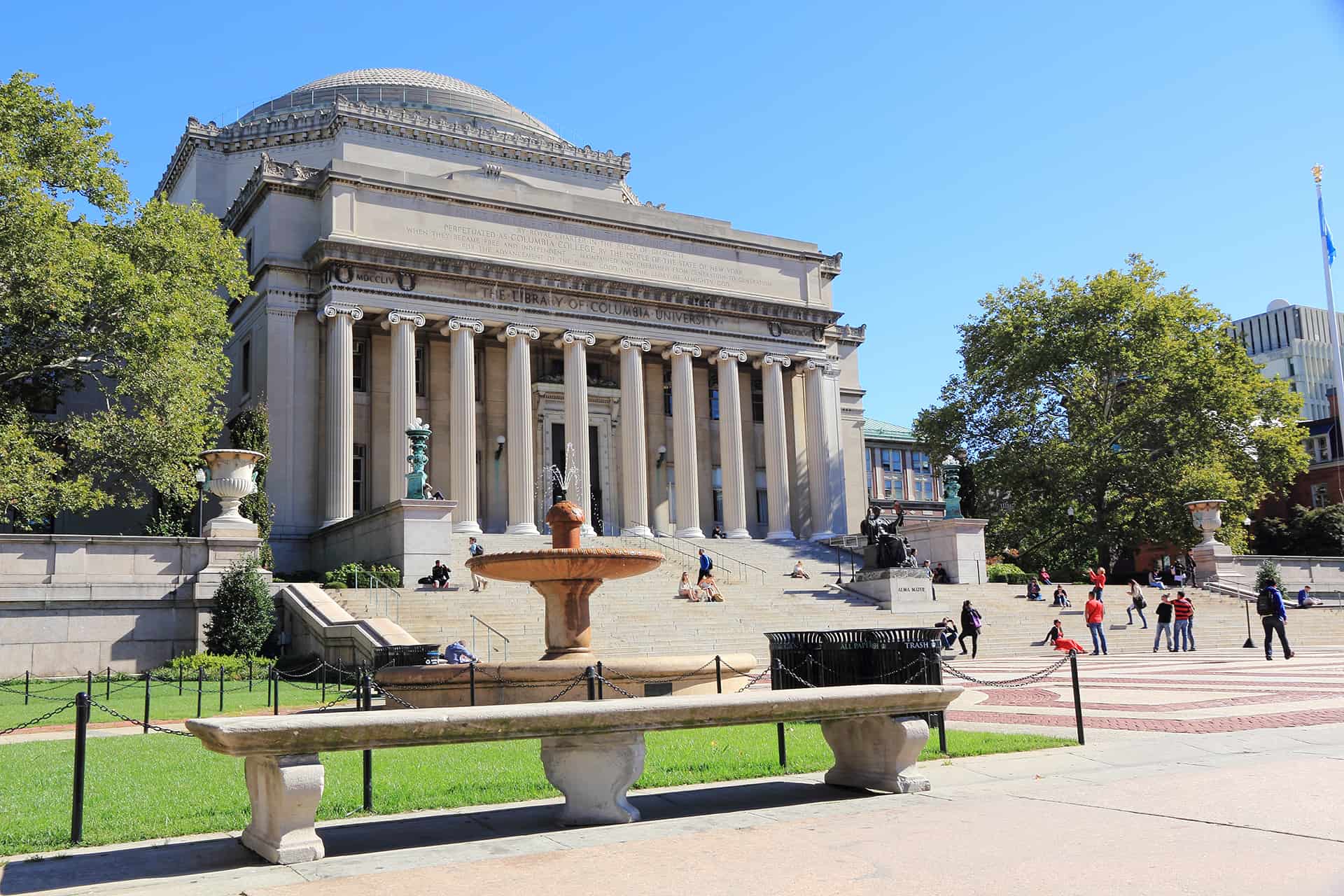 Columbia University is a very large private university located next to Morningside Park. It is part of the Ivy League, which includes eight of the oldest and most prestigious institutions of higher learning in the country. Columbia University is still one of the most renowned schools in the world, and many Nobel Prize winners, great scientists and politicians have studied there. Moreover, Columbia University is responsible for awarding the Pulitzer Prize each year.

During your stay in New York, you can visit the Columbia University campus. This gigantic campus is actually a neighbourhood of its own, with dormitories, fraternities and sororities, libraries (open 24 hours a day) and all sorts of sports and cultural facilities. You can even find restaurants and many small shops, which are ideal for finding souvenirs to bring back from your trip. The area remains very lively at all times of the year, even during the school holidays.

Cathedral of Saint John the Divine 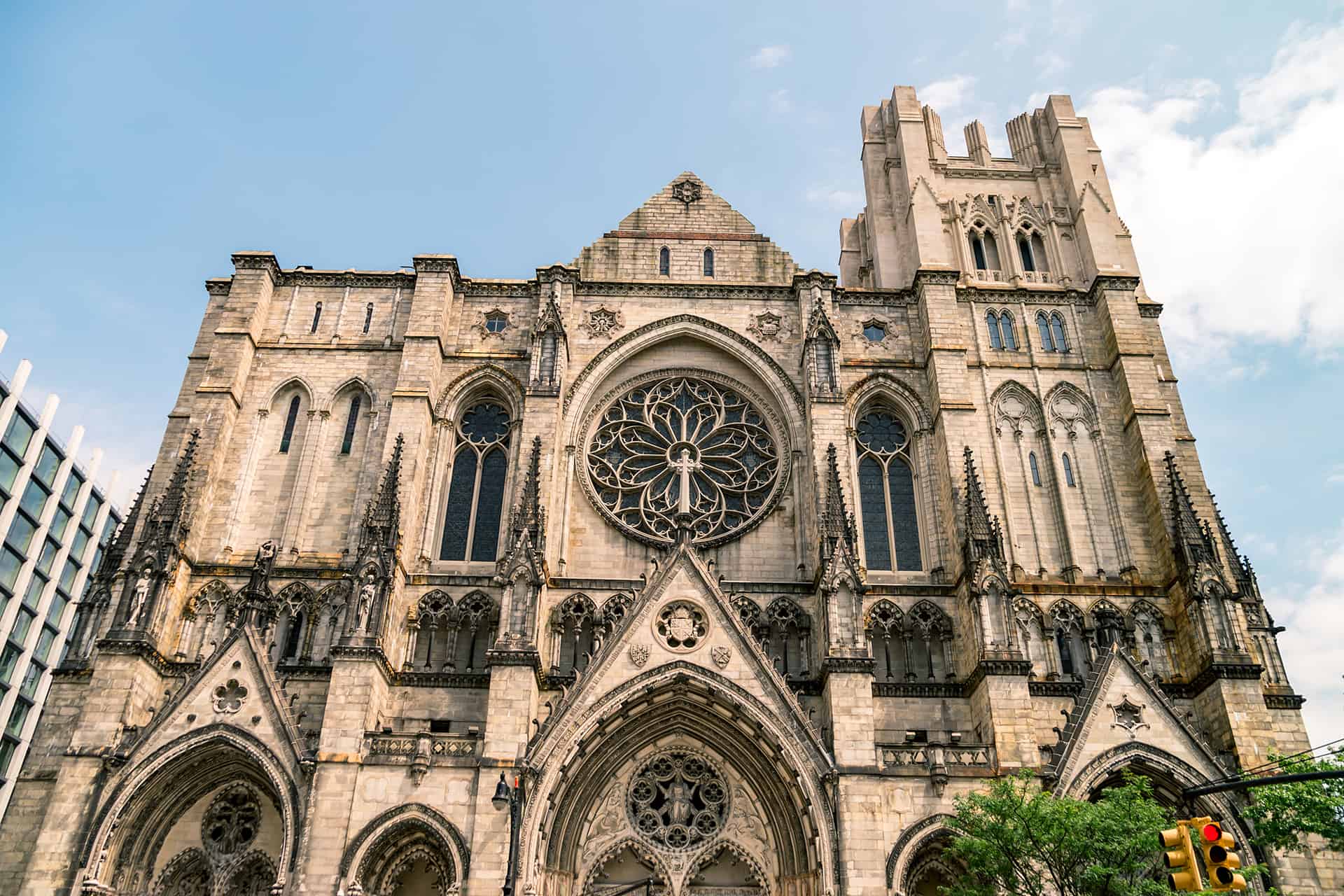 A few steps from Central Park, this religious building is one of the places you can't miss when discovering the Upper West Side. It is the largest cathedral in the world.

The Cathedral of Saint John is more recent than you might think, since its construction began in 1892 but was not completed until 1979.

The 186-metre long church is a mixture of Romanesque and Gothic styles and is divided into seven chapels. Each chapel represents one of the ethnic groups that migrated to New York and arrived on Ellis Island from the late 19th century onwards.

Take a trip to Central Park and Riverside Park 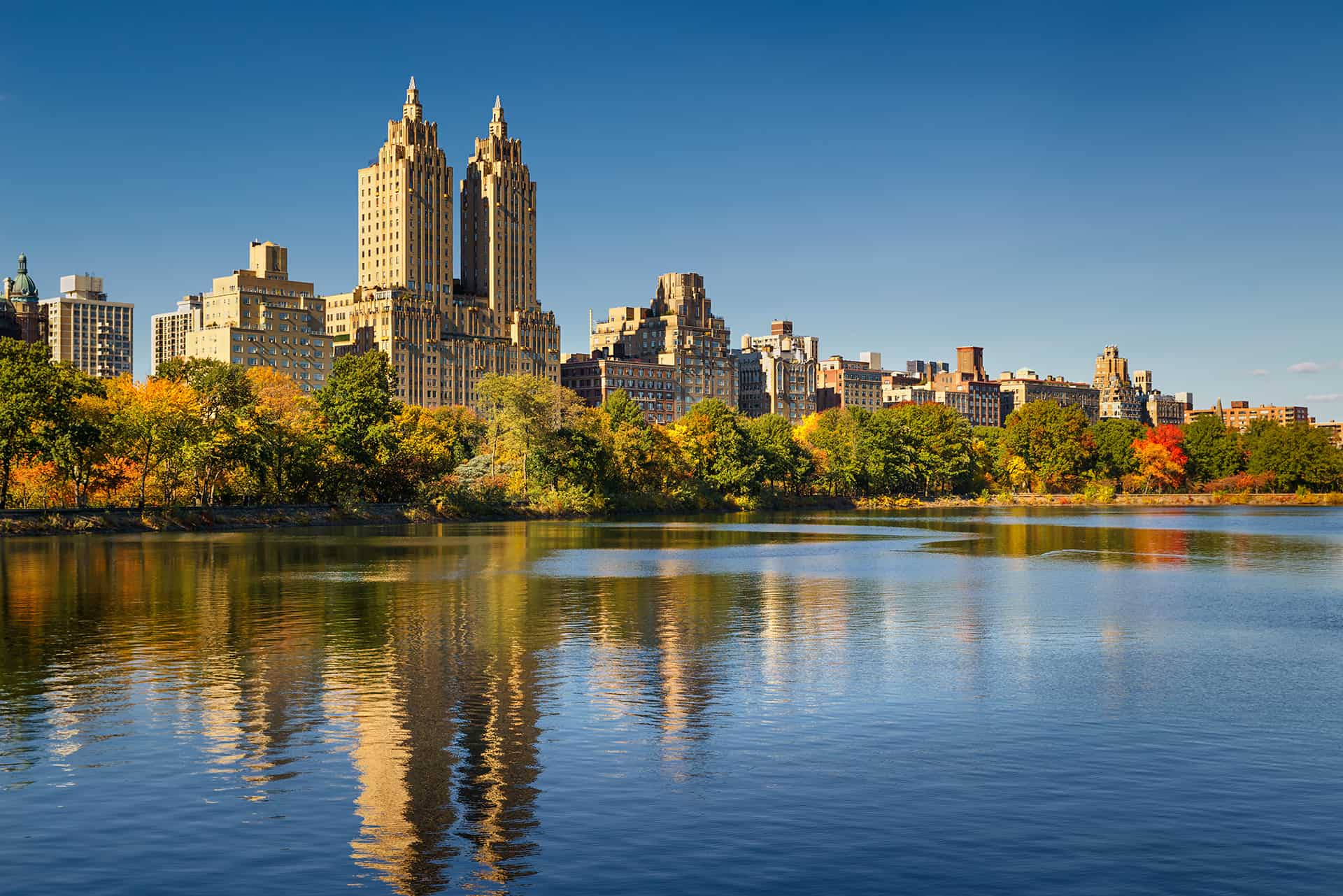 The Upper West Side is bordered on either side by two of New York's most beautiful parks.

To the west, Central Park is bound to be one of the places you'll definitely discover during your stay in New York.

You'll never run out of opportunities to visit this true symbol of the city – whether just for a stroll, a picnic, or a photo shoot. It is also possible to rent bicycles to discover the park more easily 🙂

With the help of this pleasant and environmentally friendly means of transport, you will have the opportunity to see all or most of the park in just one day.

YOU CAN RENT BIKES TO DISCOVER CENTRAL PARK BY CLICKING HERE

The other option is to take a guided bike taxi ride through Central Park. Like this, you can relax while listening to the unique stories of this famous urban park. More information by following this link.

To the east, Riverside Park stretches from 72nd to 159th Streets, along the Hudson River. This long park is the perfect place for a short walk or some outdoor exercise. The park is also home to several historical monuments, such as the famous Soldiers and Sailors statue, which commemorates the courage of the men and women who fell in the Civil War of 1902. The Firemen’s Memorial is another monument which honours the firefighters – the city's heroes.

If you walk through Central Park, you'll arrive on the Upper East Side, located just across from the Upper West Side.

Shopping in the Upper West Side

If you want to find the best place to shop in this part of New York, Columbus Circle is the place to go. This large plaza is located at the southwest corner of Central Park.

It is located at the intersection of four of New York's main thoroughfares: Broadway, Central Park South, Central Park West and 8th Avenue. In the centre of the square, a statue surrounded by fountains pays tribute to Christopher Columbus.

In addition to iconic buildings and complexes, such as the Lincoln Center and the Mandarin Oriental Hotel, you will also find the Time Warner Center, which houses a large, upscale shopping mall: The Shops at Columbus Circle. Inside, you will find a large number of shops from major brands such as Hugo Boss, H&M, Amazon, Sephora, as well as many designer clothing and accessories shops such as Michael Kors, Coach and Eileen Fisher.

Through the mall's gigantic glass façade, you will enjoy a magnificent view of the square and Central Park. If you are in New York during the holiday season, I highly recommend a visit to admire the window decorations.

Where to eat in the Upper West Side? 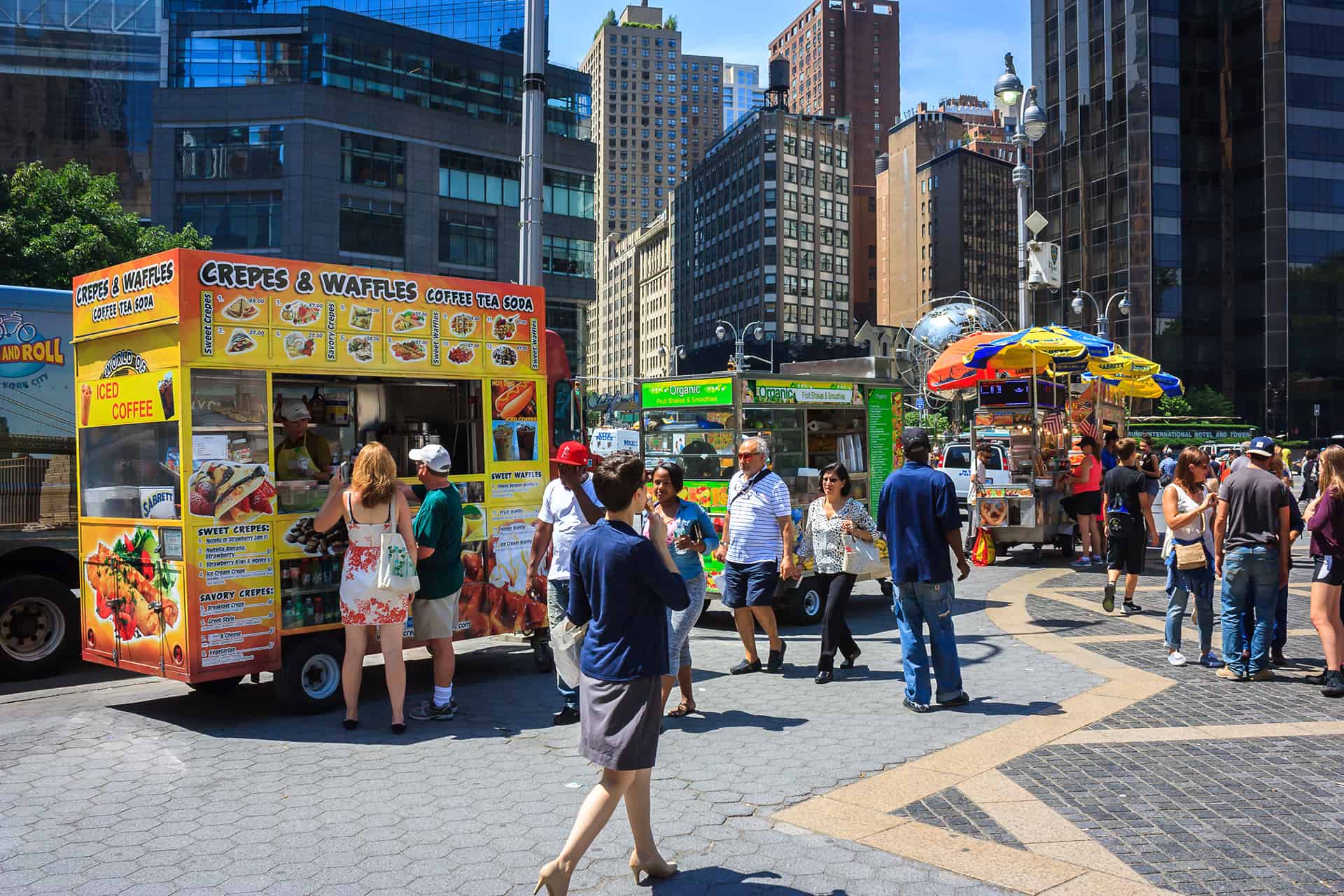 To satisfy your stomach, you'll find little bakeries and hot dog stands all over the neighbourhood. For one of the best burgers in the city, you can go to Shake Shack at the corner of 77th Street and Columbus Avenue. Just so you know, you should avoid peak hours if you don't want to wait in line – it is very popular!

In this cosmopolitan neighbourhood, there are a large number of restaurants that offer very good cuisine from all over the world. Hummus Place, for example, is a restaurant offering delicious Lebanese, Israeli and Mediterranean dishes. Jacob's Pickles offers typical American dishes and is a great place for a hearty brunch.

And if you're looking for a high-quality meal in the Upper West Side, you can head to the Time Warner Center.

Inside The Shops at Columbus Circle, you'll find great restaurants, including two Michelin 3-starred restaurants: Per Se, a French and modern American restaurant, and Masa, a Japanese sushi restaurant – which is also probably the most expensive place to eat in New York ($600 / £450 minimum per person!).