ALL THE INFO ON MANHATTAN'S BATTERY PARK

If you are visiting New York (and more precisely Manhattan), and you want to spend some time in a park, you will be spoilt for choice. But there are a few green spaces that stand out from the rest, and Battery Park is one of them. This park, in Lower Manhattan, is famous for its stunning views of the Statue of Liberty, but it also has a few other surprises in store for you...

THE BEST THINGS TO SEE AND DO IN BATTERY PARK

Battery Park was once a thin strip of land separated from the rest of Manhattan. It is there that the first Dutch settlers arrived and founded New Amsterdam (New York’s former name) a few years later. 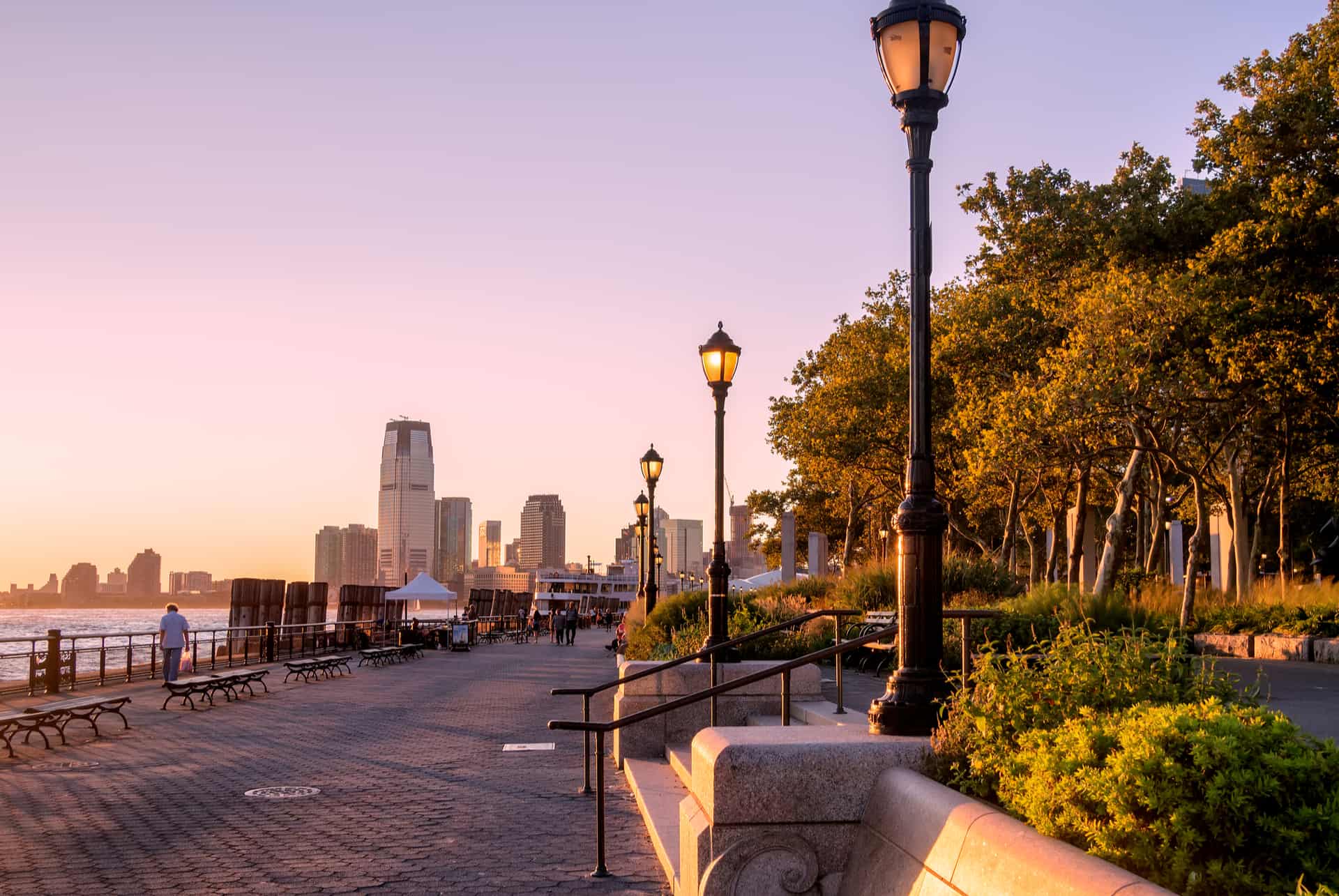 The park's name comes from the fact that it is there that the cannons that were used to defend the city were placed. Land was added to the island in the 19th century to make it part of Manhattan, and Battery Park quickly became one of New Yorkers' most popular green spaces.

Today, it still attracts a huge number of visitors who come just to have a good time or to discover its many attractions.

LOOKING AT THE STATUE OF LIBERTY

The main attraction of Battery Park is the view it offers. You can simply come and spend a great moment sitting on a bench and admiring New York's most famous landmark – the Statue of Liberty. 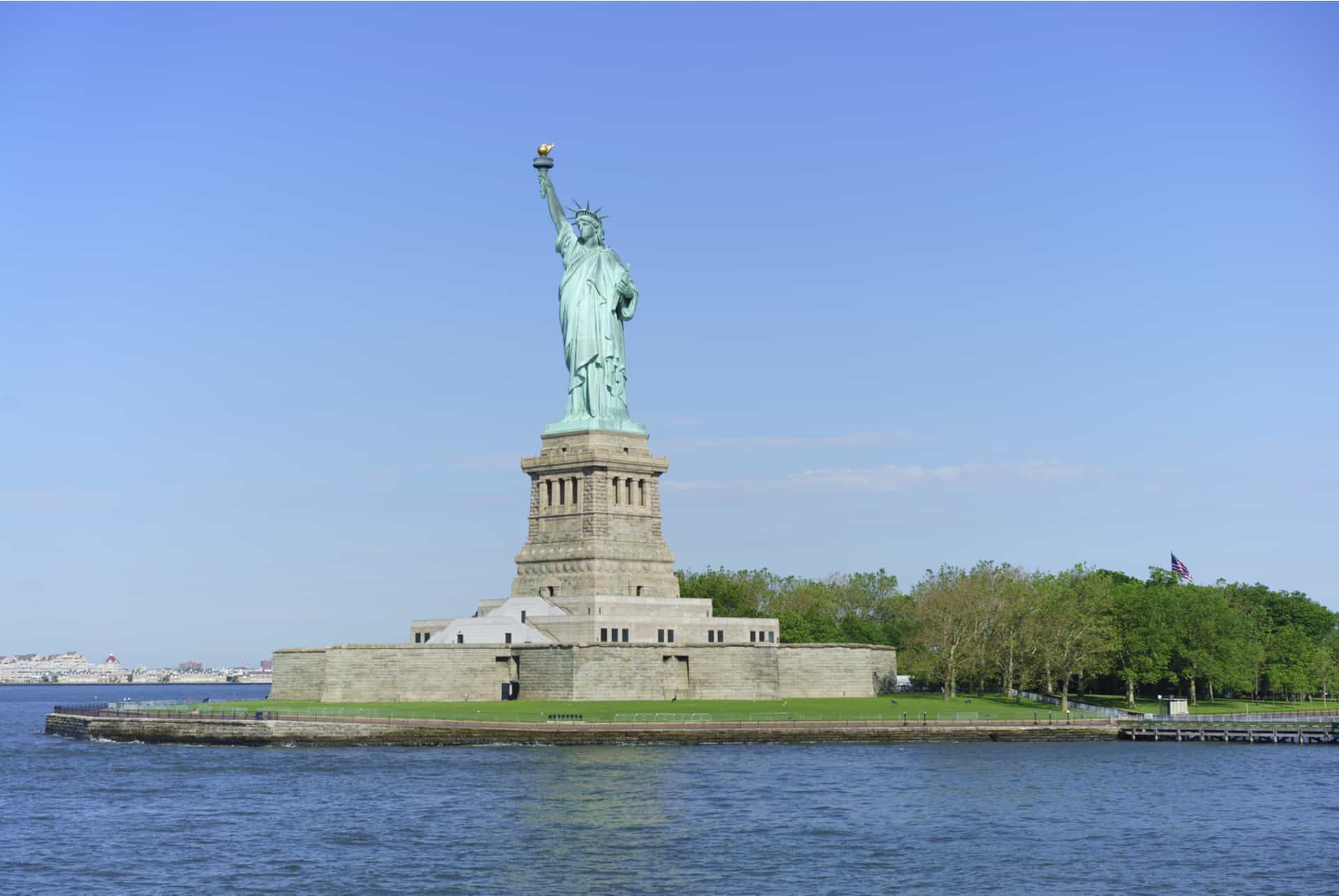 Two steps away from the Financial District and some of the busiest streets in the world, you can enjoy a little peace and quiet and recharge your batteries with an incredible view of the Hudson River. Behind and around Miss Liberty, you will also see other landmarks such as Ellis Island, Governors Island and the Verrazano Bridge.

DISCOVER THE MONUMENTS OF BATTERY PARK

There are several historic monuments in the heart of Battery Park itself: 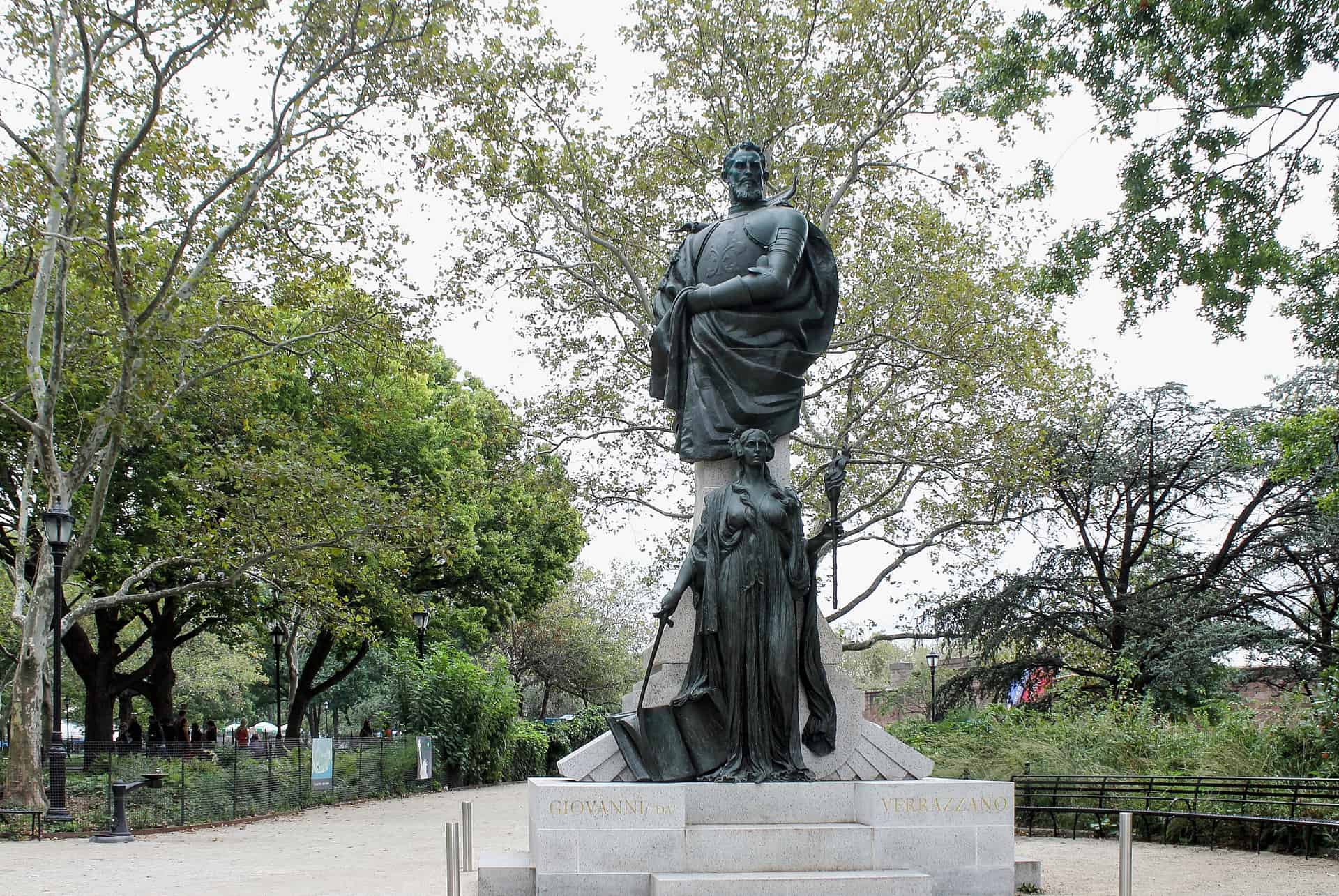 THE MUSEUM OF JEWISH HERITAGE

The Museum of Jewish Heritage is a museum and memorial dedicated to the victims of the Holocaust, located in the northern part of Battery Park. This large hexagonal building symbolises the 6 million victims and the 6 points of the Star of David.

There are several exhibits, the main one on the Holocaust and two others on Jewish culture in the past and today. In addition to these permanent exhibitions, you will also be able to attend regular temporary exhibitions, performances and film screenings.

Looking for a free, must-do activity in New York? There aren't that many, but if there's one I recommend you don't miss, it's the Staten Island Ferry. And it's in Battery Park that you can take it!

This ferry links Manhattan to Staten Island, and it runs every day of the year, 24 hours a day. It is primarily used to transport locals who live on Staten Island and work in Manhattan, but it is also a major tourist attraction, as during this trip you can enjoy beautiful views of the Statue of Liberty, Ellis Island, and the Manhattan Skyline. 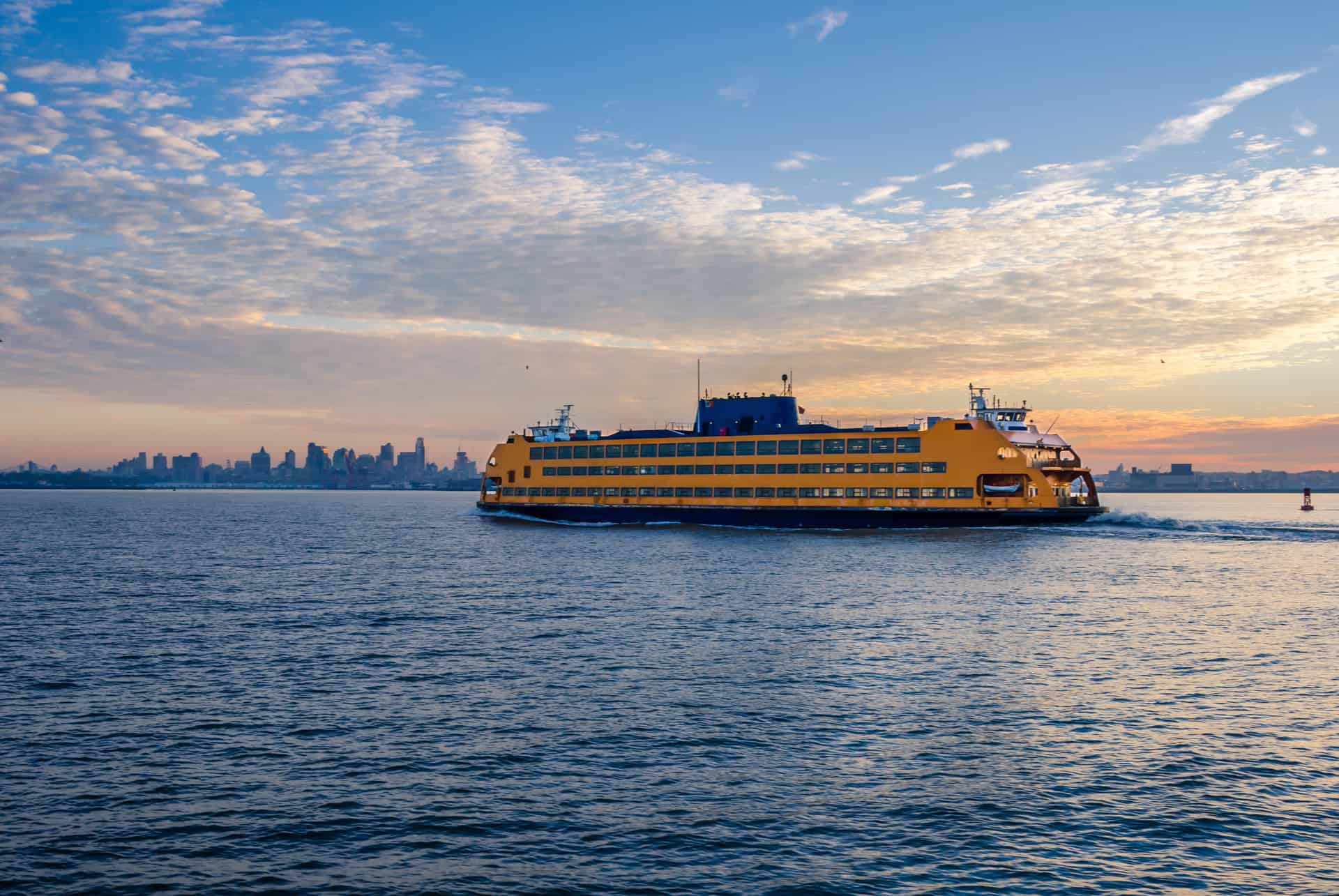 Taking the ferry is easy – just go to the White Hall Terminal, located at the southeast end of Battery Park. A little tip: avoid rush hour (the mornings between 7 a.m. and 9 a.m., and at the end of the day between 5 p.m. and 7 p.m.).

VISIT THE STATUE OF LIBERTY AND ELLIS ISLAND

The Staten Island Ferry makes it possible to observe the Statue of Liberty from much closer, but if you really want to get right in front of it, you can go on a guided tour from the departure point outside Castle Clinton. You will visit the Statue of Liberty and its museum, Ellis Island as well as the Immigration Museum at your own pace, and will benefit from an audio guide to learn a lot about the place’s history.

Don't forget that the ferry ride and the visit to the Statue of Liberty and Ellis Island are included in the New York City Pass 😉 The other possibility is to book this tour online, though it is only available on GetYourGuide.

This old circular fort built in the early 19th century to protect the city is located in the centre of the park. For a time, it was an immigration centre (before the one on Ellis Island), before it became a national monument and a museum. Fort Clinton is one of the most beautiful buildings in Battery Park, and is also the location of the ticket office for the Statue of Liberty and Ellis Island cruises.

WATCH THE SUNSET IN BATTERY PARK 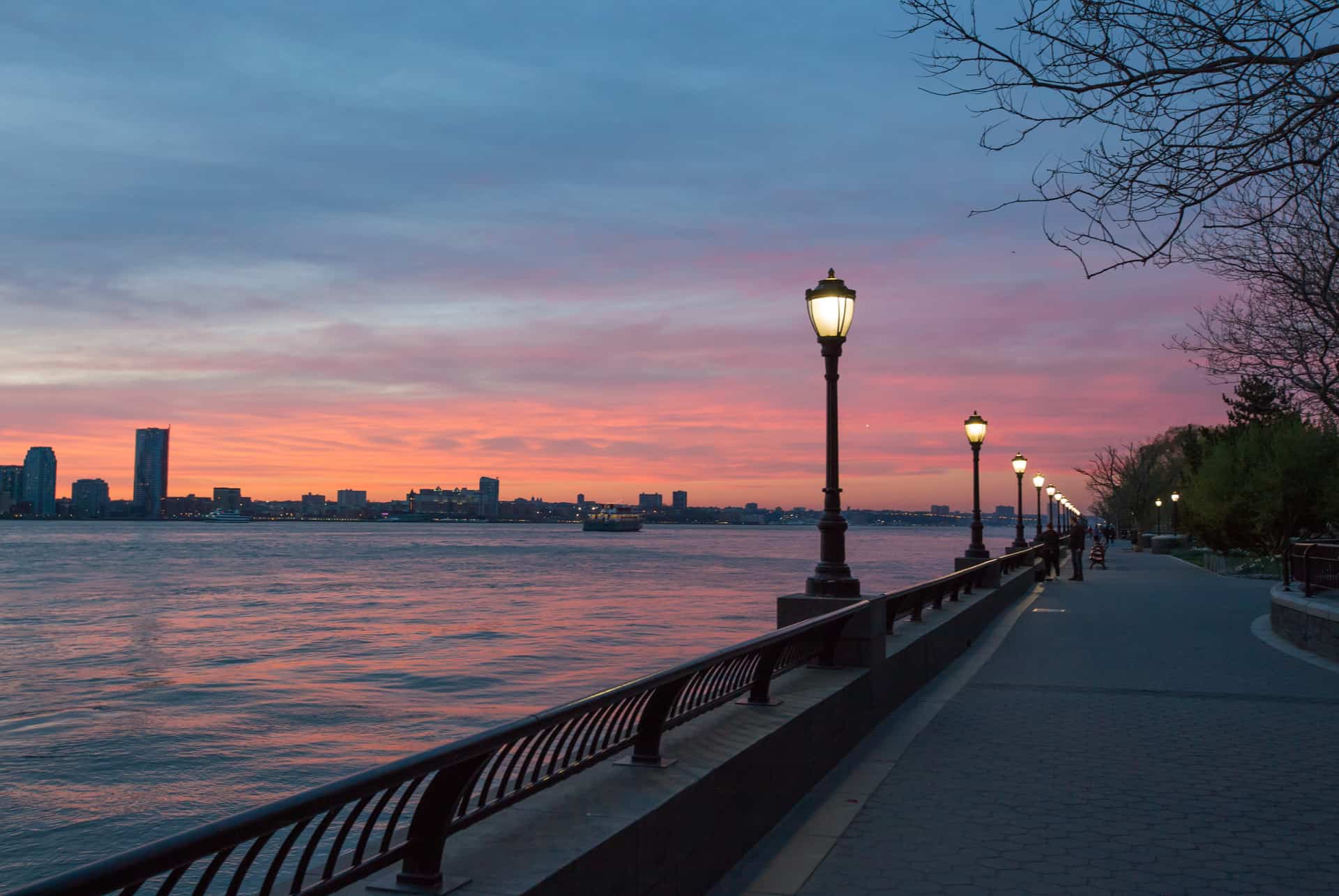 Battery Park, on the southern tip of Manhattan Island, offers the perfect unobstructed view to enjoy a gorgeous sunset over New York City. This park is probably one of the most beautiful places to watch the sunset for free, with the Statue of Liberty and Ellis Island in the background.

HOW TO GET TO BATTERY PARK? 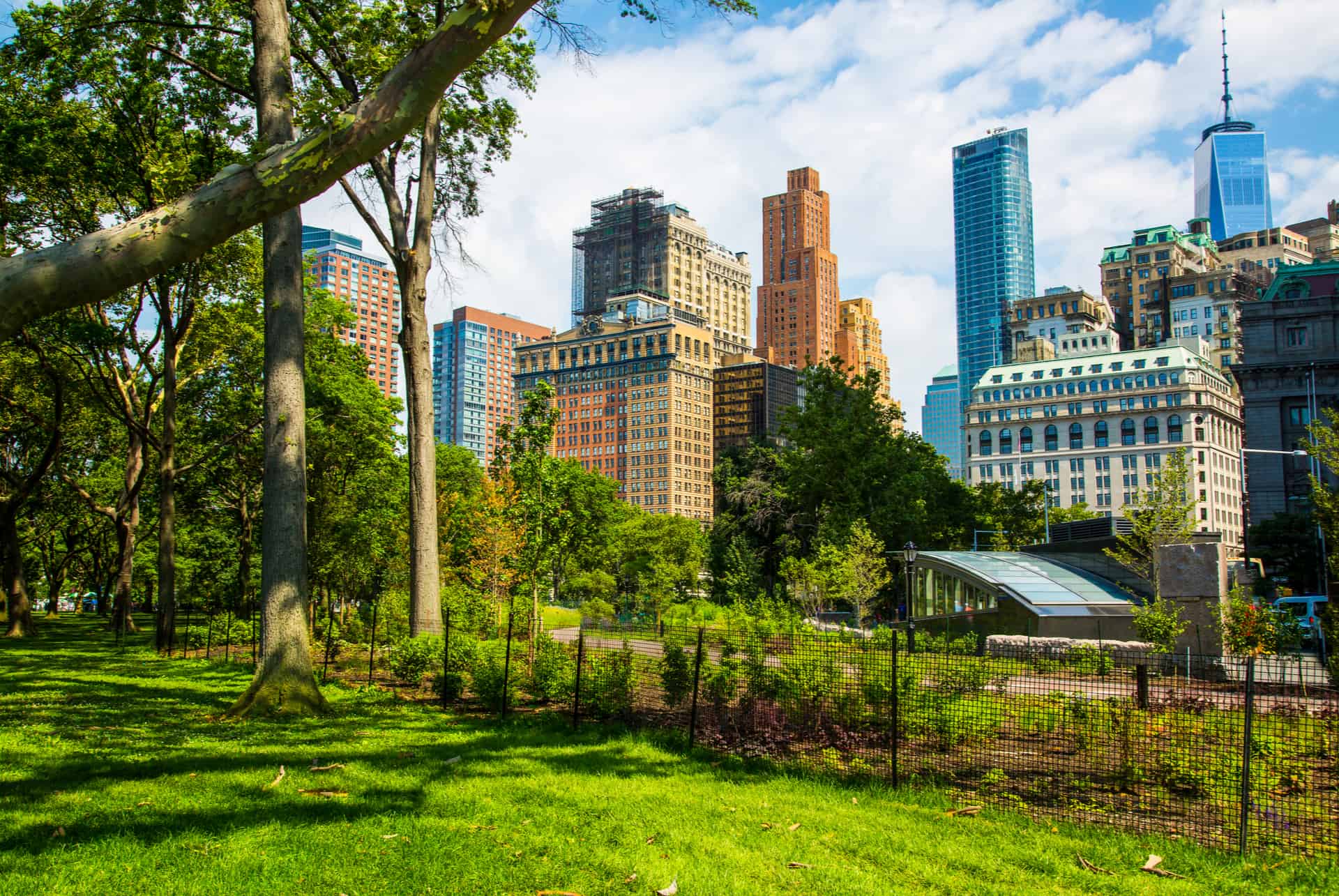 Battery Park is located in the southern part of Manhattan. The park has the advantage of being extremely well served by the underground as well as public transport, because it is also the location of the Staten Island ferry terminal.

That’s all  for this article, I hope this information helped you understand the place better! Feel free to also check out my article where to stay in New York – it will definitely be useful if you are still unsure of where to sleep during your trip 😉