Can the Flatiron Building be visited?

Facing Madison Square Park, the Flatiron Building is one of the best tourist sights of the Big Apple – a must-see attraction of any stay in New York!

If you're wondering what to do in New York, I strongly recommend passing by this strange building 🙂

Want to know more about this skyscraper’s curious silhouette? This article is for you!

History of the Flatiron Building

The Flatiron Building was created at the request of George A. Fuller, a wealthy businessman. The building was to be used as offices for his company and other businesses. In fact, he wanted to make the area a new business centre north of Wall Street.

The architect Daniel Burnham (who was also the Chicago International Exposition’s chief architect, in 1893) was responsible for the amazing and original design.

However, this unique configuration was mainly due to the location on which the building was to be built: in Midtown, at the intersection of Fifth Avenue, Broadway and 23rd Street. It was certainly one of the most prominent locations in New York – but it was also a triangular block!

The triangular property on which the building is built belonged to brothers Samuel and Mott Newhouse. They bought it in 1899 after making their fortune in the western mines.

Therefore, Daniel Burnham designed a triangular building with three facades and a point at the intersection. However, he opted for rounded facades with an "Art Nouveau" style of decoration and some French and Italian Renaissance elements. 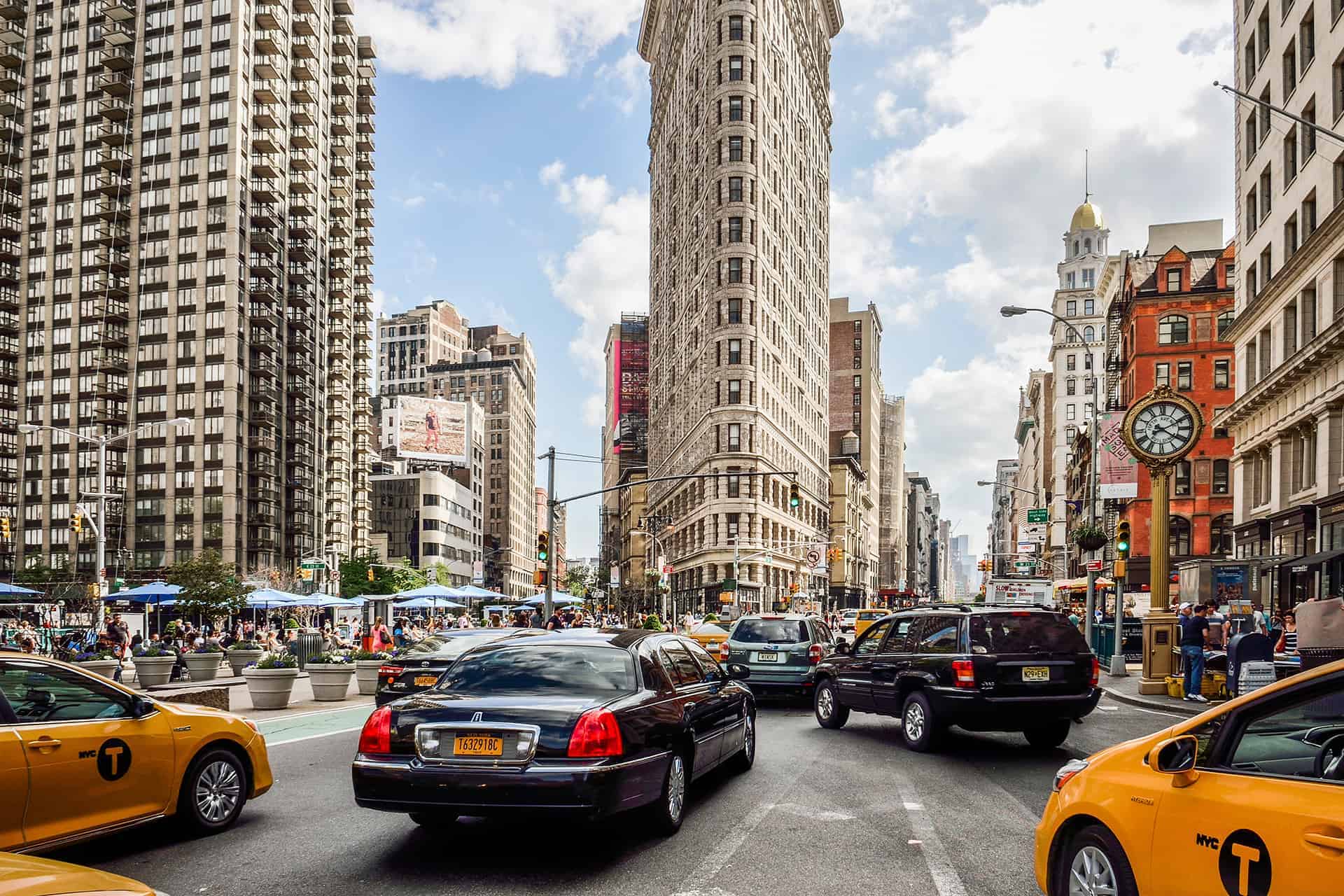 The "Fuller Building", as it was called then, was opened in 1902. At the time, it was one of the first buildings to be constructed with a steel frame and concrete and terracotta cladding. Back then, it was also the tallest building in New York.

Yet it was its triangular shape that made it a famous landmark and earned it the nickname "Flatiron Building" – for its shape reminded people of a flatiron. Of course, others see more the bow of an ocean liner than the shape of an iron (I do!), but it is nevertheless this nickname that stuck.

The Flatiron is almost as famous in New York as the Empire State Building or the Statue of Liberty!

It's definitely one of the city’s must-see 🙂

In fact, the Flatiron Building had another nickname: "Burnham's Folly". But Burnham was an experienced architect who knew what he was doing, and his skyscraper has stood the test of time.

Note that the Flatiron Building is divided into three different parts and its design actually resembles a huge Greek column, with:

What are the opening hours?

Actually, the Flatiron Building cannot be visited (not inside anyway!). It is a private building with offices for commercial use. It houses the offices of a German publishing house, "Springer Verlag", as well as some shops on the ground floor.

So unless you have an appointment with one of the companies on site, the entrance is as far as you will go! However, it is possible to enter the lobby – a rather narrow reception area in which you will find a short presentation of the history of the building and some photos.

The lobby is only accessible during office hours: every day from 11 am to 8 pm.

Note that the building has two entrances facing each other: one on Fifth Avenue and one on Broadway.

This little tour is free! 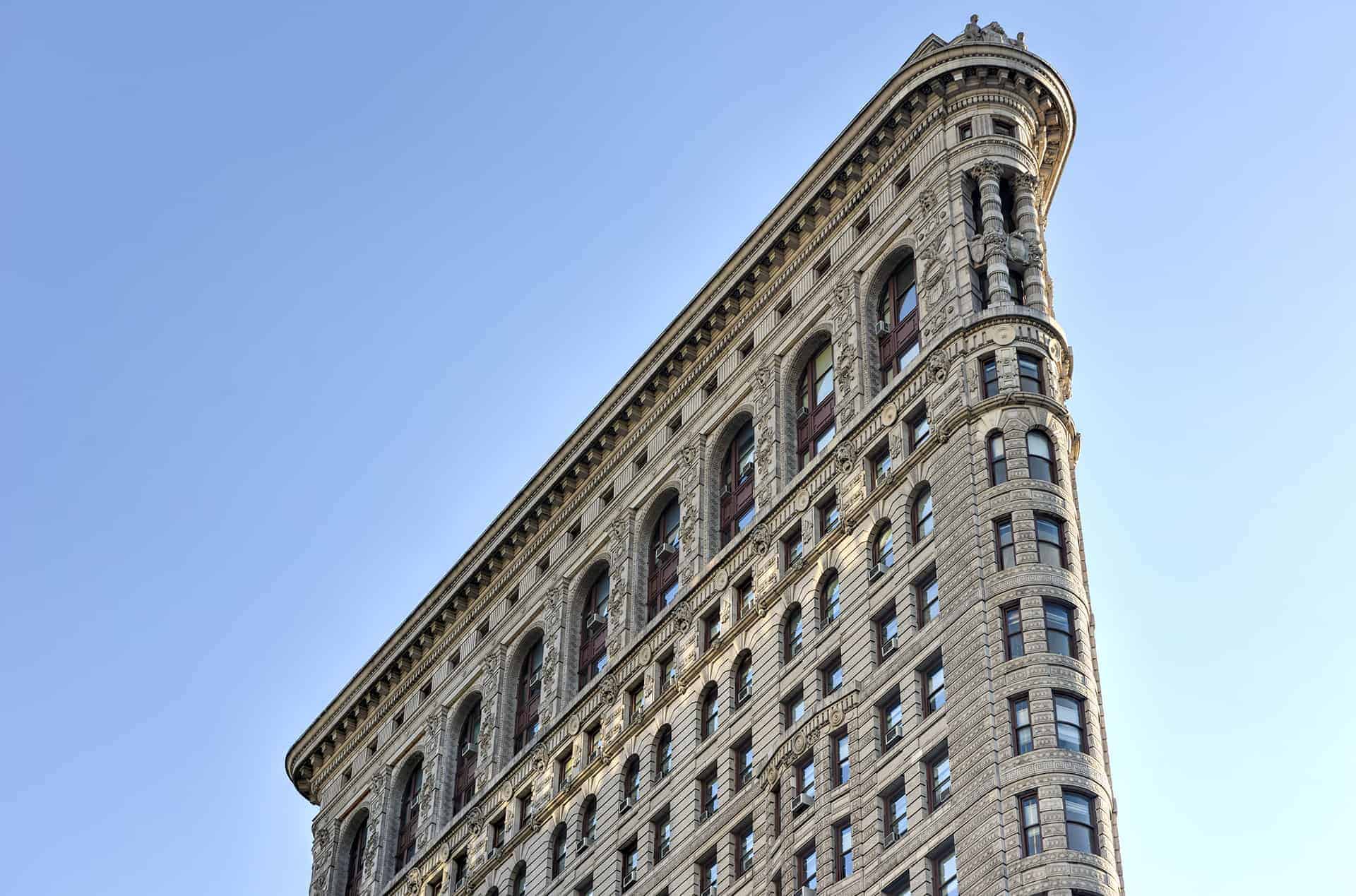 How to get there?

The Flatiron Building is located in Midtown, Manhattan, at the intersection of 5th Avenue, Broadway and 23rd Street.

To get there, you can take the New York Subway's N, R or W lines and get off at the Fifth Avenue — 59th Street station.

How to best see the Flatiron Building?

You can photograph this skyscraper from all angles from the outside – but you'll get some great shots of its facade from Madison Square Park, which is right in front of the building.

You can also see it from the top of the Empire State Building (look south!).

Some anecdotes about the Flatiron Building

The Flatiron Building gave its name to the neighbourhood that surrounds it: the "Flatiron District".

It is one of the most photographed monuments in New York.

After its inauguration, it housed the New York Times’s headquarters.

The Flatiron Building originally had an observation deck on the top floor. The building therefore has a rooftop.

The Fuller Company left the building in 1929. That same year, the company built another, much taller Fuller Building, at the corner of 57th Street and Madison Avenue.

On a side note, you should know that due to its location (at the crossroads of several streets, and in front of Madison Square Park), many winds surround the building: the wind speed increases at the foot of the Flatiron Building. The gusts lifted women's skirts, revealing their ankles, to the delight of the young men of the time!

The winds are still present, but with shorts or trousers, no need to worry! 😉

The Flatiron Building has also appeared many times in several movies:

And that's it for this article! It's a shame that the Flatiron cannot really be visited, but passing by for the little tour and the sight is a must!