Macy's in New York is the largest and most prestigious department store in the Big Apple.

In this department store, which occupies an entire block of the Manhattan district, you can find almost anything you're looking for, whether it's clothing, jewellery or fashion accessories.

New York is one of the most beautiful destinations in the world for many reasons, and one of them is shopping.

In this post, I'll give you an overview of all the things you can experience when visiting Macy's in New York. 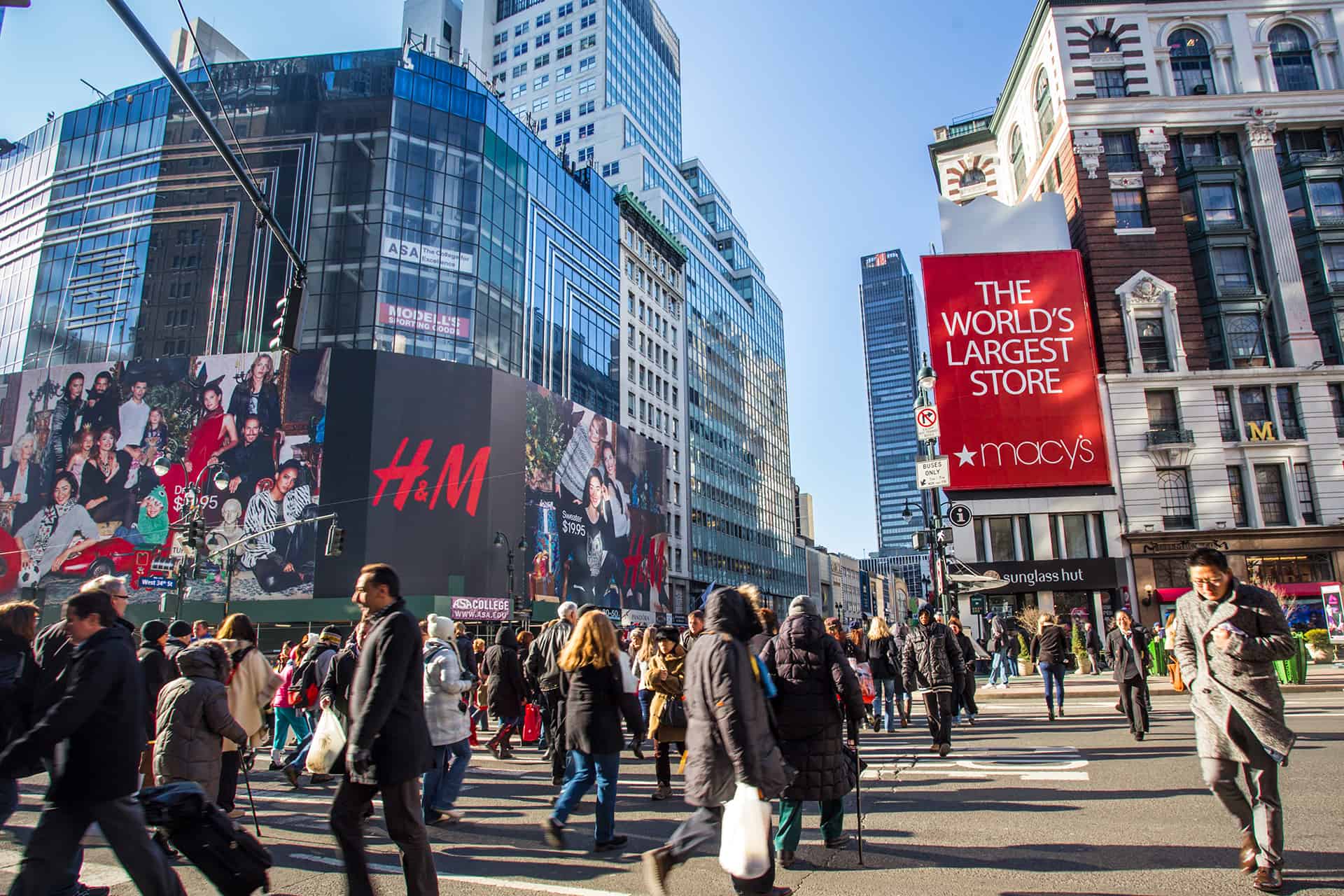 Macy's is one of the oldest brands in the United States. The most famous of the brand's establishments is the one based in New York – in Herald Square. This huge shop is just a few steps from the Empire State Building and close to Madison Square Garden.

Macy's was founded by Rowland Hussey Macy, who opened his very first shop in Haverhill, Massachusetts in 1851. After some success, he decided to move to New York a few years later, and founded what would become one of the most famous department stores in the world.

The first Macy's in New York was located at 14th Street and 6th Avenue, but after Macy partnered with Nathan and Isidor Straus, the department store was moved to the location it still occupies to this day.

It first opened its doors in 1896. Of course, the original shop was not at all so large, and the establishment expanded gradually, in line with its success. 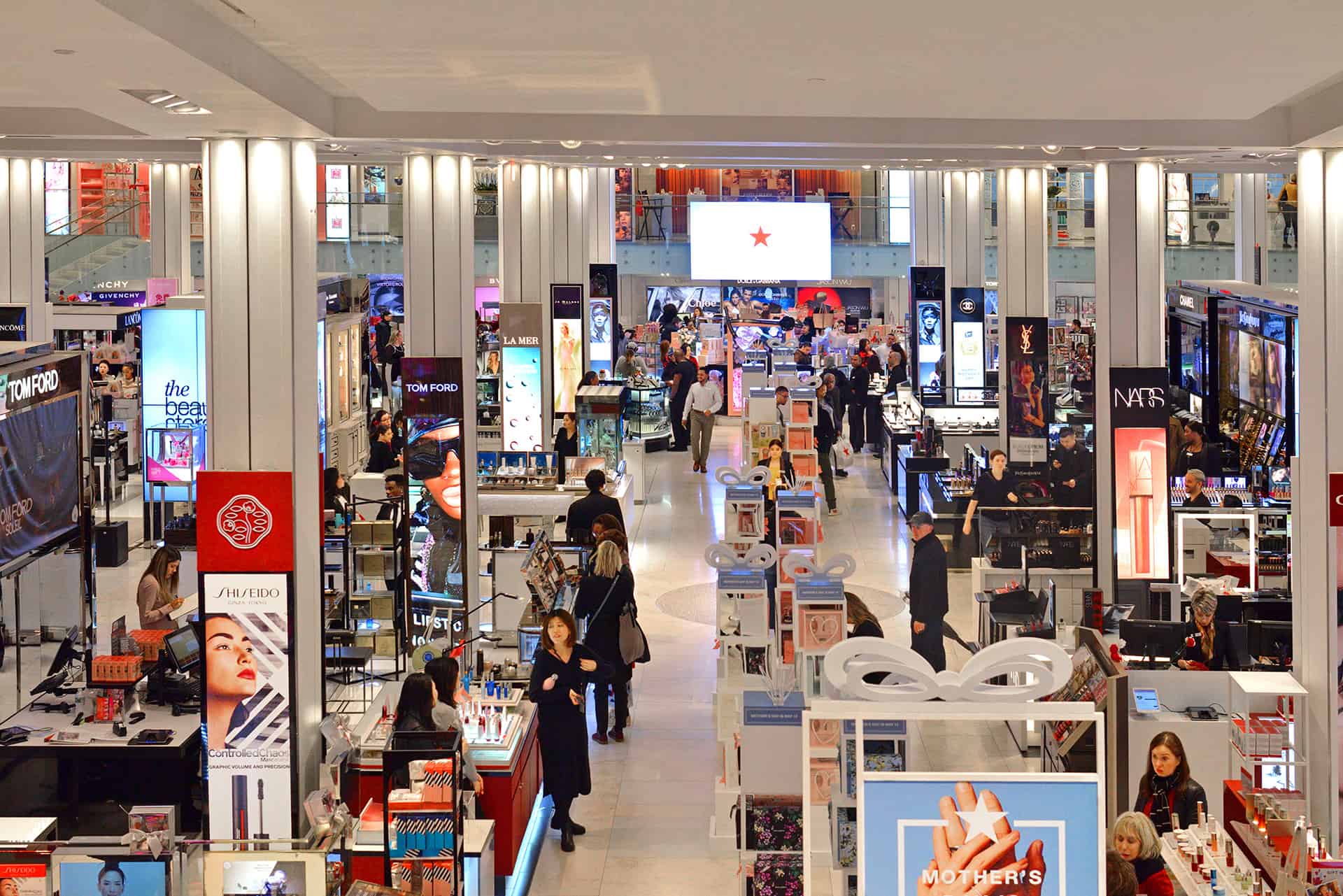 If you are visiting this department store for the very first time, you will be amazed by the sheer size of the place. The building not only spans an entire street, but also has a total of 11 floors. It is primarily luxury and designer shops that are present, and all the brands wish to set up shop in what has now become the symbol of shopping in New York.

In fact, the area is so vast that on a first visit you will probably have trouble finding your way around and finding what you are looking for, especially during the busiest times. Fortunately, there are plenty of maps and directions on site to help you find your way, and the staff will of course point you in the right direction.

For visitors, it is possible to get a 10% discount on many of the products available in the department store’s shops with the Macy's Visitors Saving Pass. Simply go to the visitor reception area to apply for your card.

The department store is divided into a number of divisions, including cosmetics, jewellery, fashion accessories and perfumes. The clothing shops are also divided into several sections according to what they offer: women's clothing, men's clothing, sportswear, large and small sizes, etc. 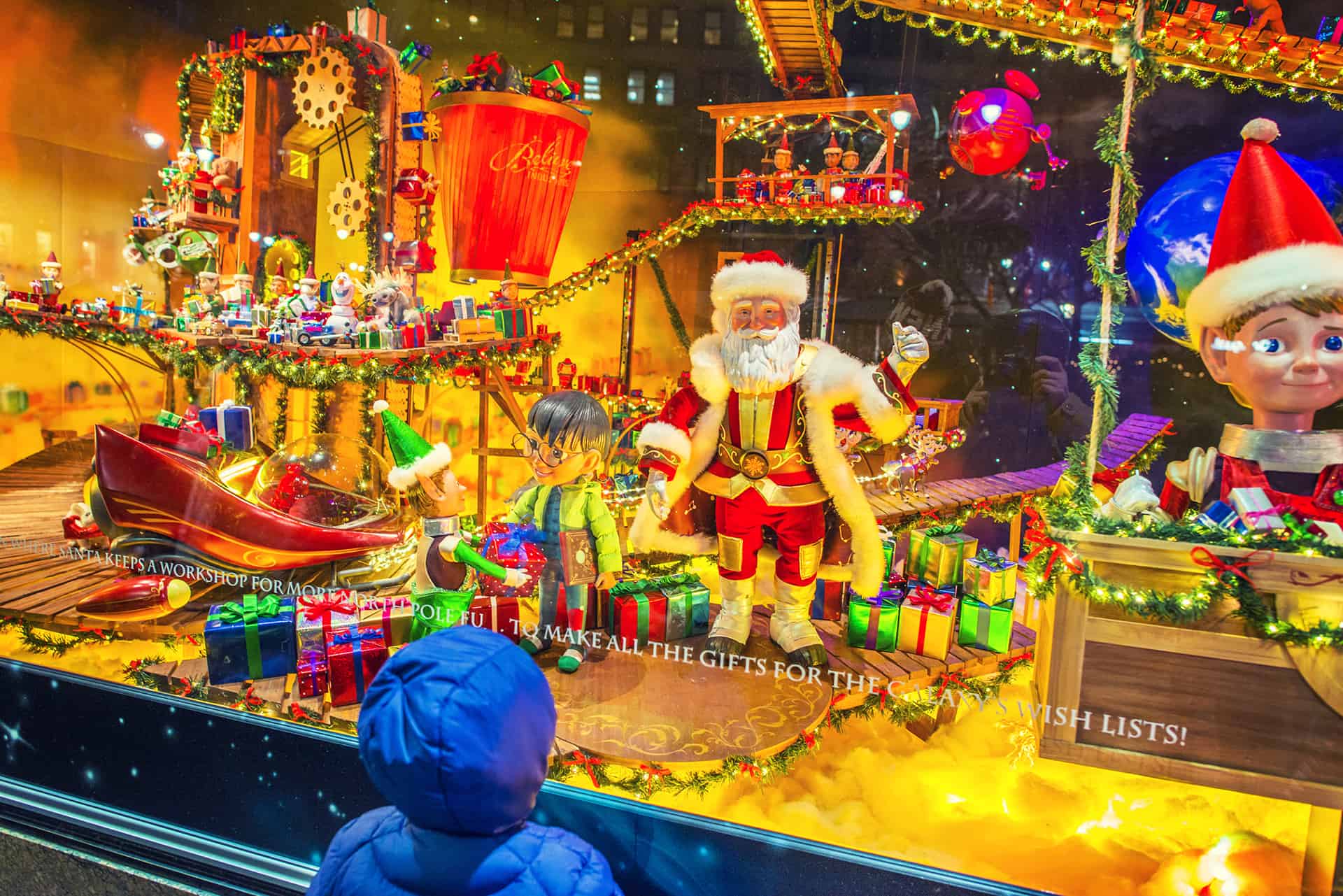 During the holiday season, New York City is transformed like almost no other city is. One of the attractions that draws visitors from all over the world during the Christmas season in New York are the department stores' Christmas window displays.

Macy's Christmas windows are undoubtedly among the most spectacular in the city. So much so that today, their unveiling is an annual event. As the holiday season approaches, thousands of visitors come daily to admire the magnificent decorations. The windows and the entire ground floor are decorated with a theme that changes every year. You can even see a huge Christmas tree inside! On each floor, all the shops compete with each other to showcase their products with superb and often very sophisticated decorations.

Since 1977, on the 8th floor, you can visit Santaland, Santa's kingdom, which is a true village inside the department store. From the end of November to 24 December, Santaland attracts a huge number of visitors every year. There you can discover Santa's workshop and a rainbow bridge, and children can play interactive games. If you plan to visit, I really recommend making a reservation, which will allow you to get a “no-queue” ticket.

Finally, you should know that during the whole Christmas period, the top floor of the department store is entirely dedicated to the sale of Christmas decorations. This huge space is fully decorated and all the items you see are up for sale!

If your stay in New York is around the end-of-the-year festivities, you will have the opportunity to admire the various decorations put up by the city, by the different shops (notably Macy's) and by individuals.

You can either discover them by yourself, or during a bus tour, with a guide.

If you love and value the magical spirit of Christmas, you'll be in for a treat in this beautiful city of New York 🙂

MORE INFORMATION ABOUT THE EXCURSION HERE 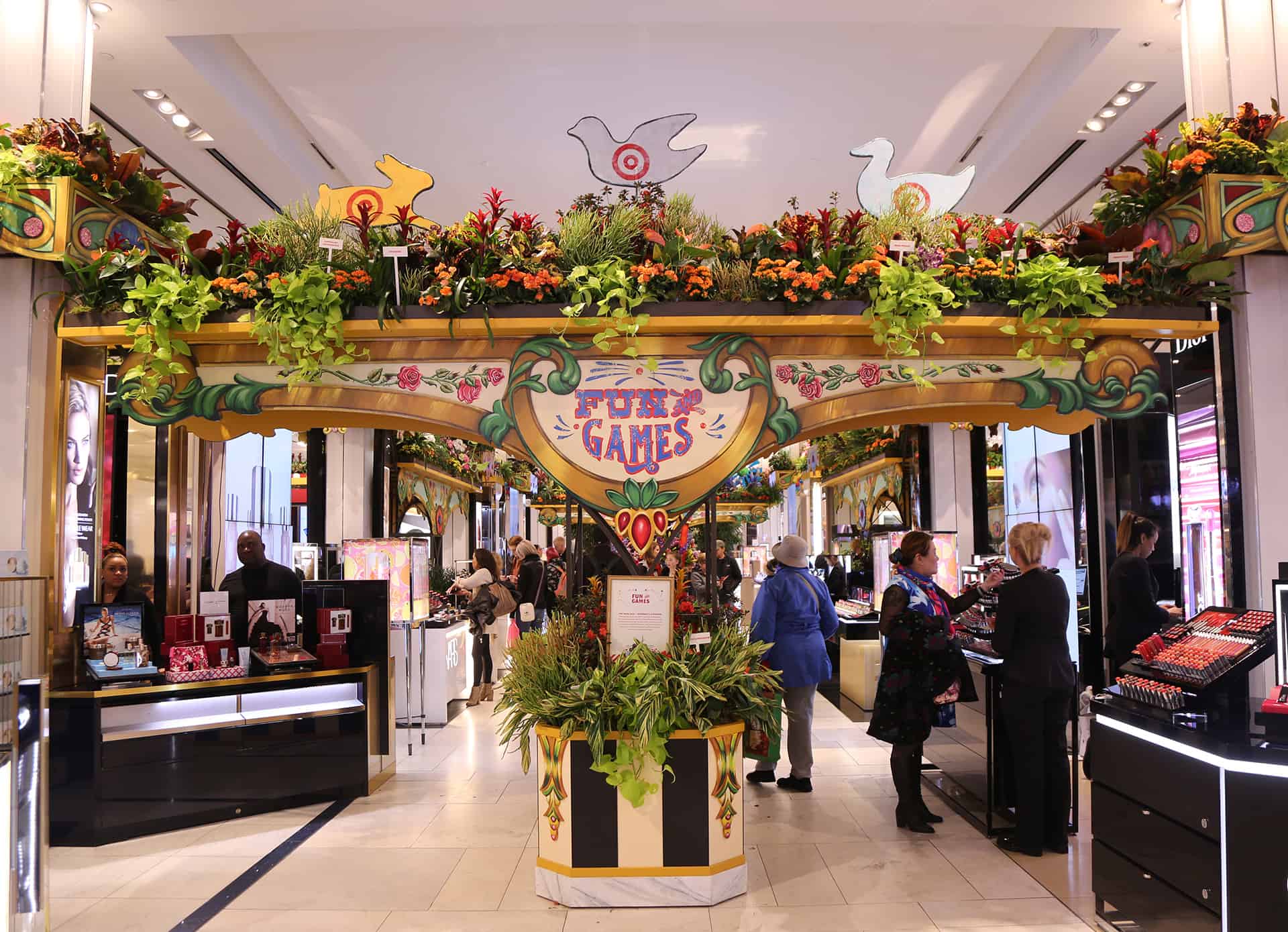 Since 1946, Macy’s Flower Show has been held every year at the end of March. During this two-week celebration of flowers, the entire ground floor of the department store is decorated with beautiful floral creations.

Just like for Christmas, a different theme is chosen each year. The focus is on floral art, and the creations of the leading specialists in the field are often particularly impressive. The venues, which are already dazzling in normal times, become truly enchanting during this event.

Discover Macy's history during your visit

Still not convinced that this department store is really huge and full of history? Well, know that you can discover it on a guided tour, just as you would a museum or a castle.

This tour will allow you to familiarise yourself with the place, before going on a shopping spree. During the 45-minute tour, you'll learn about the 150-year history of Macy's, as well as the architecture of Macy's Herald Square, which was founded in 1902 and is now a National Historic Landmark. Did you know, for example, that this department store was the first to use an escalator?

This tour also focuses on the commercial side of the mall, and you'll learn about all the techniques used to showcase products for over a century.

This historical tour of Macy’s is for example offered in the list of options of the "Sightseeing Flex pass".

This Sightseeing Flex Pass allows you to choose between 2 and 12 attractions from a list of 100 activities to do during your stay in New York. This gives you the opportunity to customise your stay with activities that YOU want to do 🙂

This pass will not only save you money, but will also give you certain benefits and discounts.

MORE DETAILS ON THIS TOURIST PASS BY CLICKING HERE 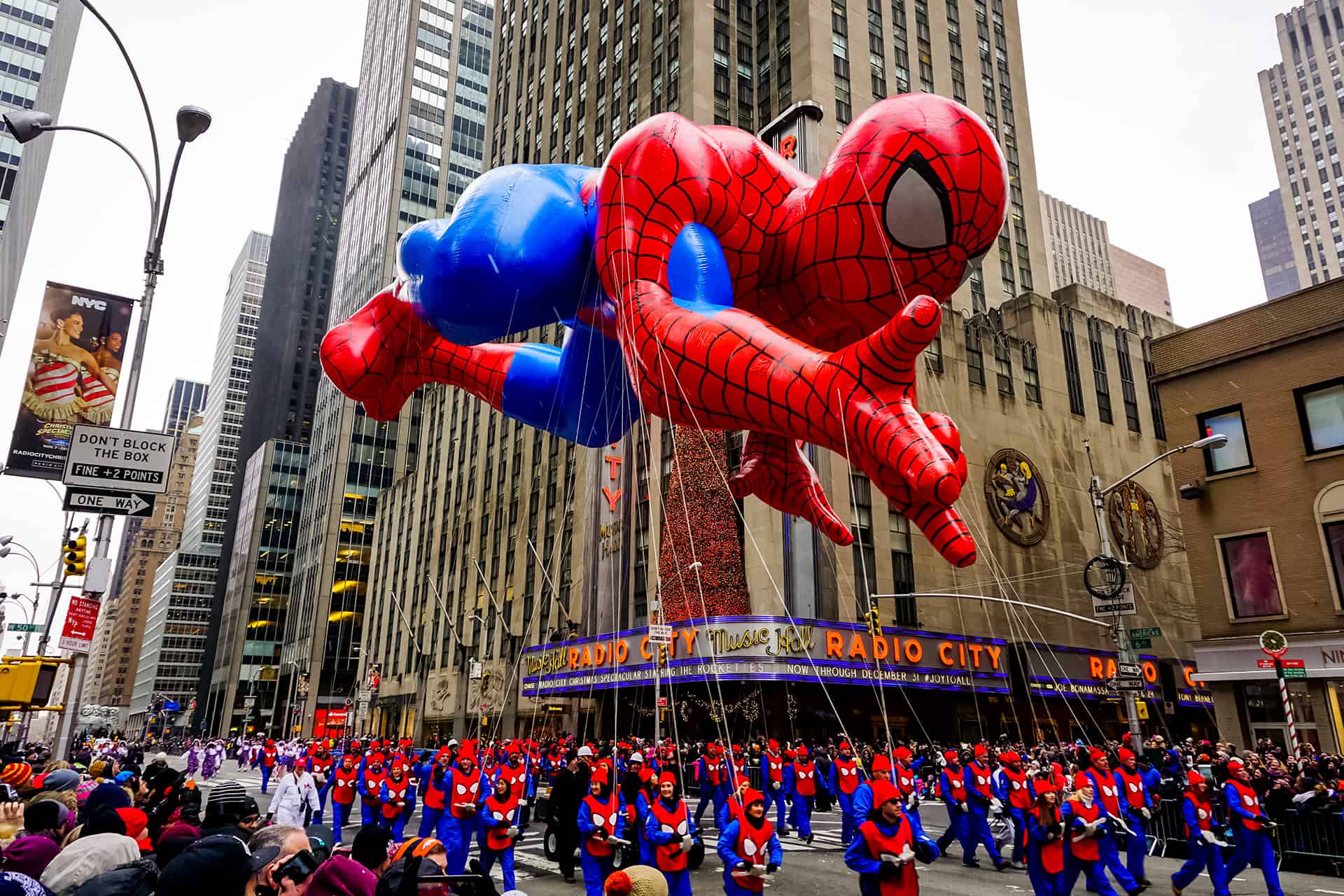 Every year, to celebrate Thanksgiving, all the department store's employees hold a big parade along Central Park, between the American Museum of Natural History and Columbus Circle. The Macy's Thanksgiving Day Parade is a real event, televised and watched by tens of millions of people.

Marching bands, floats and cheerleaders parade for almost 4 kilometres, and it is during this parade that you can see huge balloons bearing the likenesses of famous pop culture characters, such as superheroes and Disney movie characters.

If you are in New York during the Thanksgiving period (the fourth Thursday in November), this is a must-see event. To see the parade in the best conditions, I recommend going there as early as possible. The best place to watch the show is shortly before the parade arrives, between 60th and 70th Street.

The parade starts at 9 am, so plan to arrive at least 2 hours early if you want to secure a great position to watch the show. Fortunately, the balloons are so large that you can easily see them even if you haven’t managed to get a spot along the avenue. The day before the parade, the inflation of the balloons is also an impressive spectacle, which you can watch near the American Museum of Natural History, starting at 1 pm.

As you can see, half a day will not be too much to discover all there is to see at Macy's in New York. If you want to take a break and grab a bite, there is a buffet area on the ground floor, the Food Court. There you can find a nice variety of fresh products. You can choose to compose your own dish by choosing your ingredients yourself, or have a local speciality or a burger. If you are feeling peckish, you can also choose a pastry or a snack.

There are also several restaurants in the mall, such as the Stella 34 Trattoria pizzeria on the 6th floor. Just a few minutes’ walk from the shop, you can also find several great places to grab a bite to eat, such as the Shake Shack on Broadway, or Andrew's Coffee Shop on 7th Avenue.

And that’s it on Macy’s department store. Hope you enjoy your shopping there!