WHAT TO DO AND SEE AT CHRISTMAS IN NEW YORK?

New York is a beautiful city, with thousands of places to discover during a trip. But during the Christmas season, New York transforms itself and takes on a completely different atmosphere. Decorations and lights cover the streets and shop windows, residents compete to decorate their homes creatively, and the city’s whole atmosphere is filled with Christmas magic. Here's a glimpse of what you can expect to see if you decide to spend Christmas in New York.

Before we even talk about all the places and activities you will be able to discover and try, the first thing to note when talking about New York during Christmas is the special atmosphere you will find in every corner of the city during this period.

After Thanksgiving, decorations can be seen everywhere in New York. The city is lit up with a myriad of colours, and often the snow adds to the picture to really complete a unique Christmas atmosphere. In most shops and public places, Christmas music is played over and over again, and even on the streets you will come across a large number of people singing along and adding to the festive atmosphere.

You can discover the different Christmas decorations and atmospheres present in the city by yourself. Another option is to be guided by a local guide who will give you a comprehensive tour of the different places. You will leave by bus from Manhattanand head to the heart of the Christmas atmosphere to stroll through the famous Dyker Heights neighbourhood 🙂 A short detour to the Brooklyn Bridge is also on the agenda.

TO FIND OUT MORE ABOUT THE TOUR, CLICK HERE 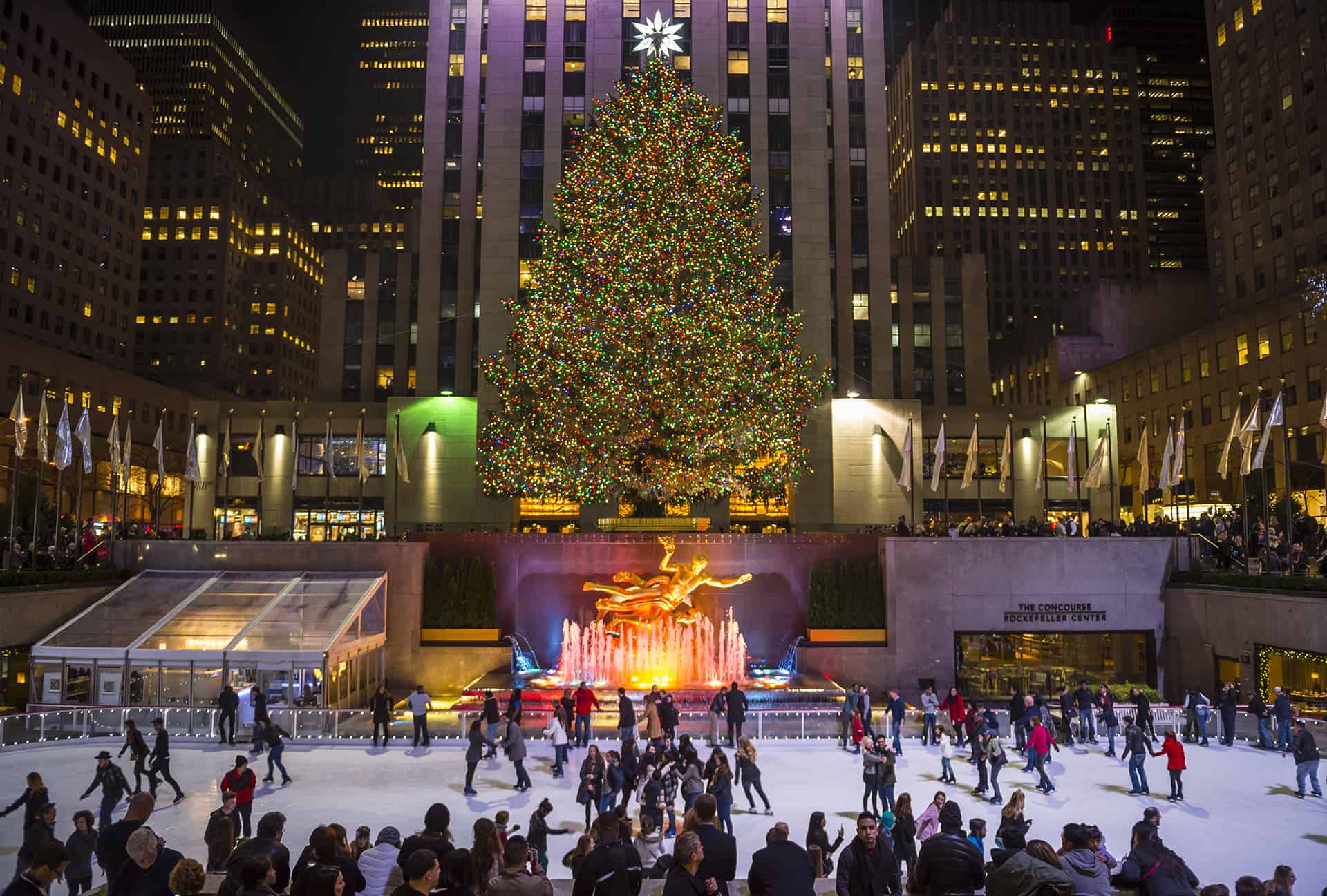 What would Christmas be without a tree? Well, this Christmas tree is undoubtedly one of the most famous in the world, and the most beautiful you will ever see in New York. Every year in the first half of November, this gigantic tree decorated with more than 30,000 lights is erected on the esplanade of Rockefeller Center. Each year, a ceremony is held to celebrate the lighting of the tree: the Tree Lighting Viewing Party. If you wish to attend, you will need to arrive early, or book your ticket in advance.

At the foot of the tree is a popular ice rink for New Yorkers and visitors alike. If you want the unique experience of skating on this esplanade, then enter the chalet to warm up, a VIP package is available. In addition to allowing you to skate without having to wait in line, this package will also allow you to reach the Top of the Rock observation deck, located on the Rockefeller Center’s 70th floor, from which you will enjoy a panoramic view of New York and its Christmas lights.

WHAT TO DO AT CHRISTMAS IN NEW YORK? DISCOVER THE CHRISTMAS MARKETS OF COURSE!

You will find Christmas markets in many places in New York. As a rule, you can visit these markets from the end of October to the beginning of January. They are perfect for finding some souvenirs to bring back from your stay. Of all the markets in the city, the most enjoyable are those in Grand Central, Colombus Circle, Union Square and Bryant Park.

The Bank of America Winter Village in Bryant Park features stalls from artisans and traders from around the world in small glass shacks, and you will also find an amazing ice rink in the park. 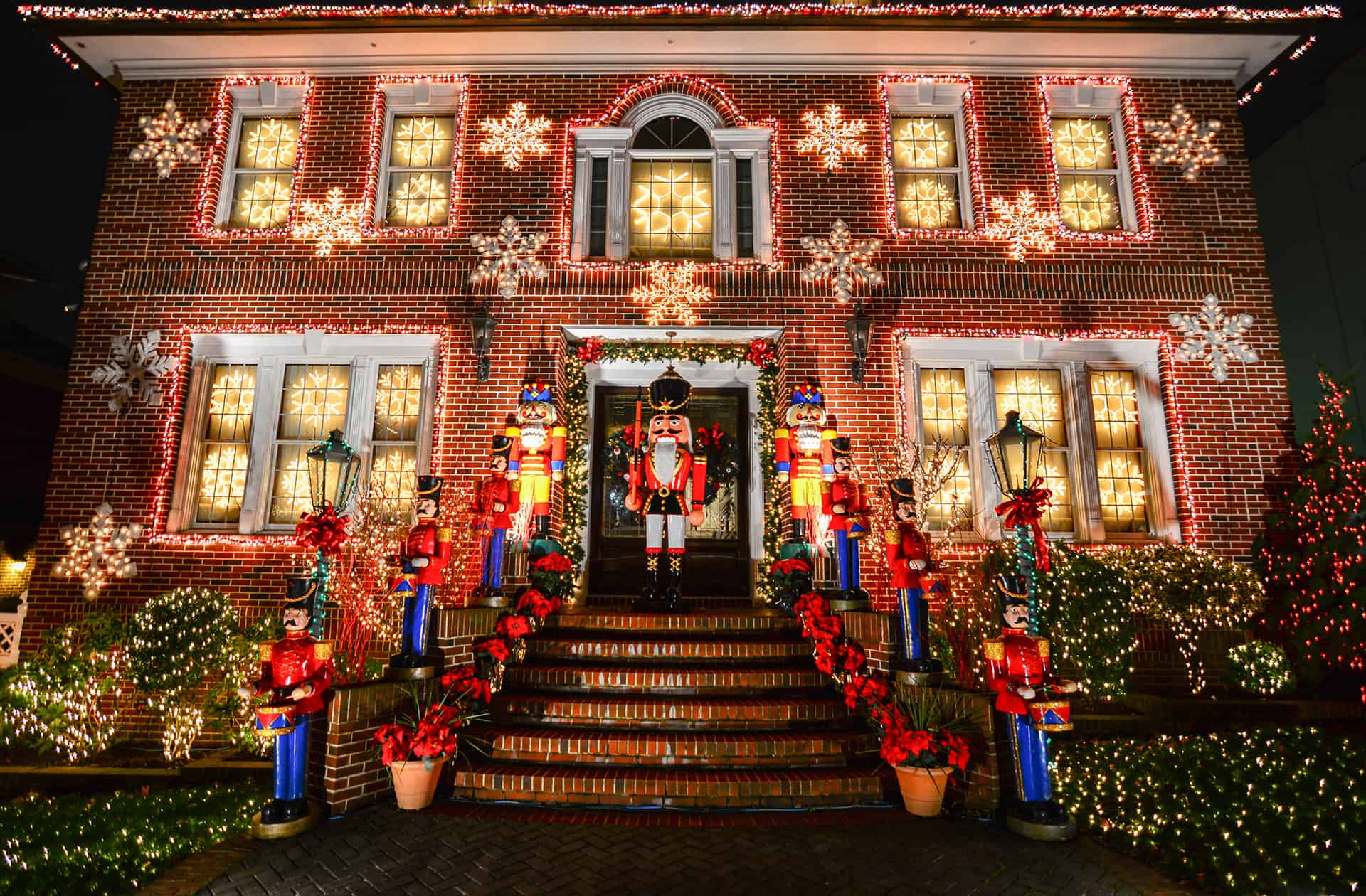 You've probably seen – in movies and TV shows – that many Americans are not joking around when it comes to decorating their homes for Christmas. In Dyker Height, a residential neighbourhood in Brooklyn, you can see how these movies are very much not exaggerating. Every year, more than 100,000 visitors come to admire the decorations put up by the residents of this neighbourhood, which is regularly voted as the best decorated neighbourhood in the country.

You can see the decorations for yourself, or you can opt for an organised tour. Starting in Midtown, these guided tours will take you to the most beautiful facades and will help you best enjoy New York’s unique Christmas atmosphere.

MORE DETAILS ON THE TOUR BY CLICKING HERE

This is another popular event that takes place during the Christmas season in New York. Every year, these miniature trains run through the heart of the New York Botanical Garden. In addition to enjoying the indescribable atmosphere of this garden during the holiday season, you will be able to admire many models of the city's greatest monuments, such as the Empire State Building, the Brooklyn Bridge, the Metropolitan Museum of Art and Grand Central Terminal. In total, the show features models of almost 150 New York landscapes – all of which are made from natural materials such as leaves, seeds and bark. 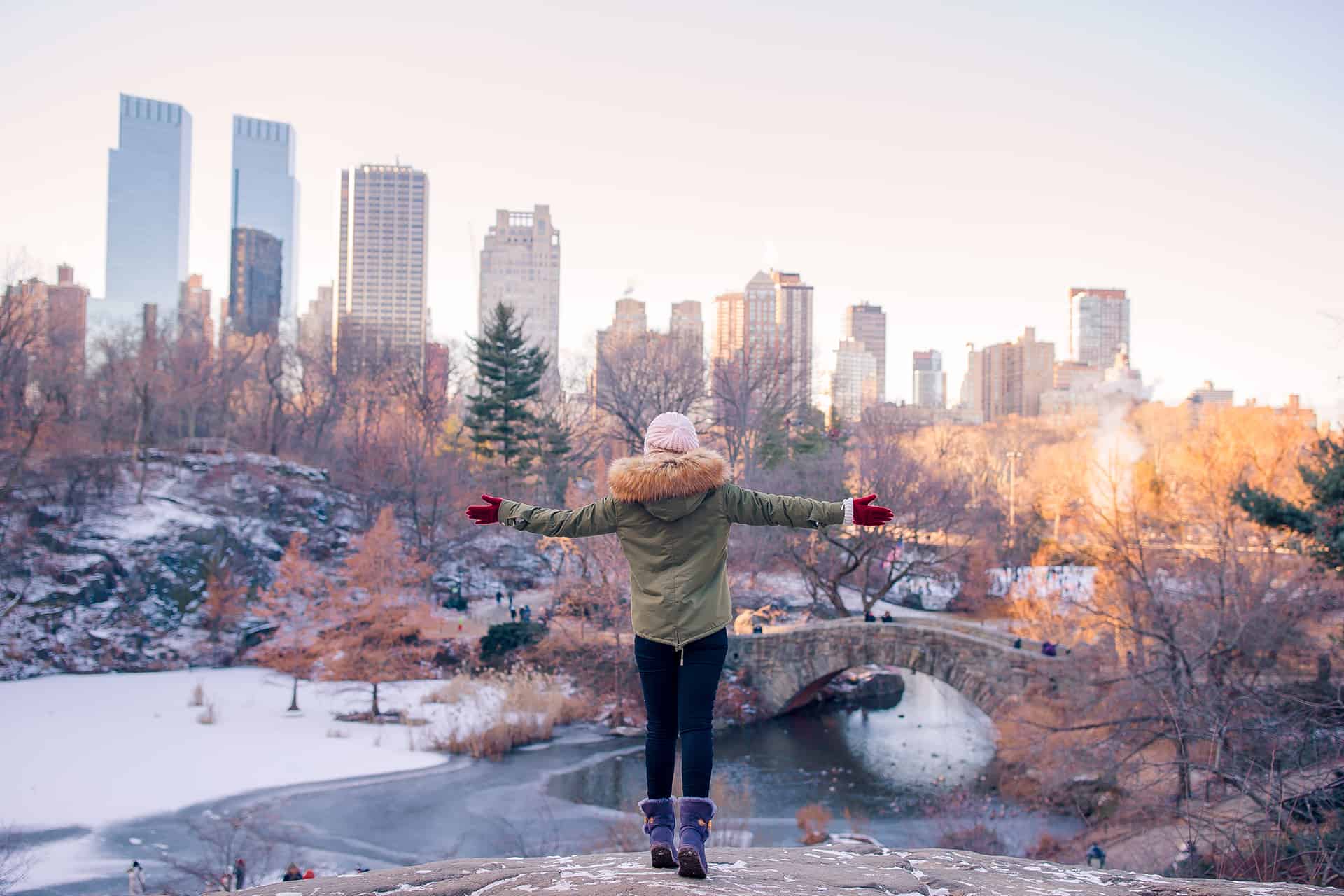 On 25 December, many shops, restaurants and museums do not open. Christmas Day can therefore be the best moment to discover New York’s outdoors places, such as its monuments and its numerous parks – the most famous of these being Central Park, of course.

Christmas Day is the perfect time to take a stroll in this mythical place of New York, especially if snow has fallen. In the park, you will even find the Wollman Ice Rink, a true symbol of New York during the holiday season, which you have surely seen in a Christmas movie. Make sure you bundle up, as the temperature in the park can be much colder than in the streets of New York. 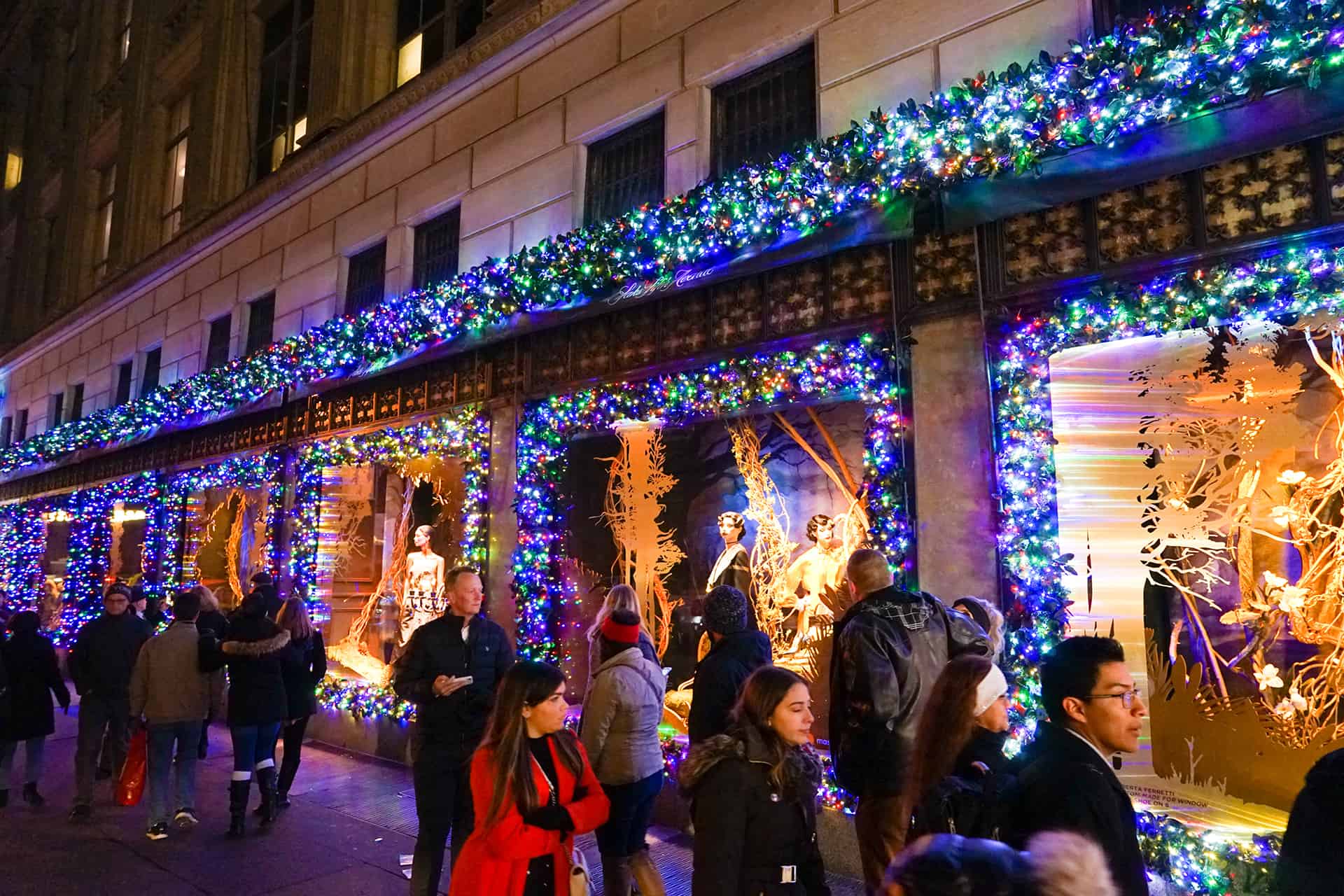 New York is one of the world's most popular shopping destinations. It is also a place where Christmas is taken very seriously. So it's no surprise that shop windows are totally transformed as the holiday season approaches. For New York department stores, Christmas window decorating is a major event, which often requires year-round preparation.

More than mere decorations, boutiques and department stores create themed windows that tell a story. You can therefore admire, free of charge, a very large number of small sceneries on various subjects.

It is on Fifth Avenue particularly that you will find the most elaborate stagings. Among the big names that are very famous for their windows, you can find Bloomingdale’s, Saks Fifth Avenue New York, Tiffany & Co, Bergdorf Goodman and Macy’s. Typically, windows are decorated for Christmas after the Thanksgiving holiday, starting in late November, and the decorations are quickly removed after the New Year.

In the Christmas windows of this Third Avenue department store, elegance and attention to detail take the place of honour. Each year, a theme is selected and renowned artists are commissioned to create the decorations in each of the store’s 6 windows. For example, the 2019 theme was "Out of this World", in tribute to the 50th anniversary of man's first step on the moon. 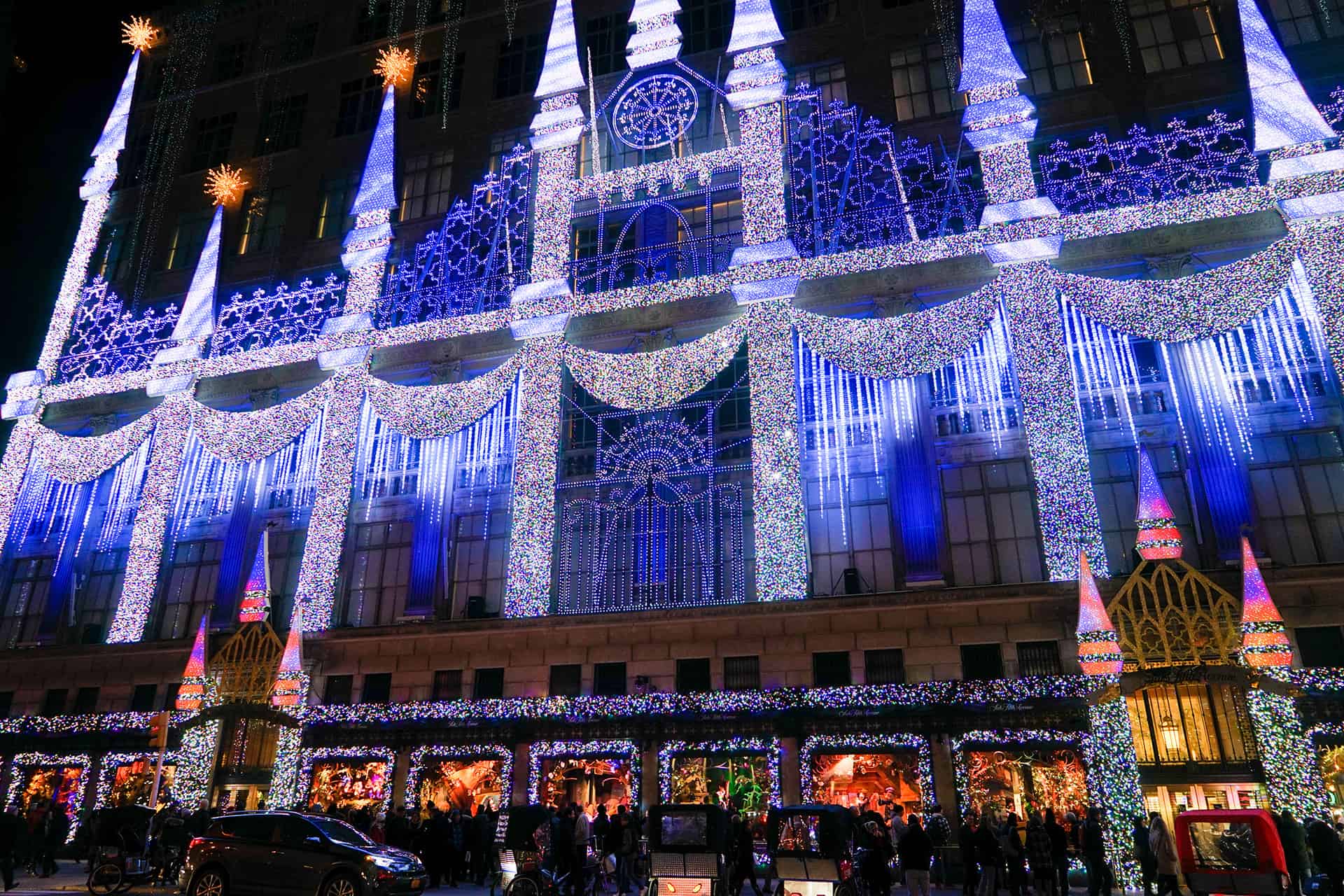 This department store, located just south of Central Park on Fifth Avenue, also puts up decorations related to specific themes. In addition to admiring the windows, you can also stand on the pavement across the avenue and watch the Christmas Light Show. Every evening from 5 pm to 10 pm, lights and 3D effects are projected across the front of the department store, creating a unique show that is not to be missed if you are in New York for Christmas.

the windows of BERGDORF GOODMAN

This luxury department store on Fifth Avenue doesn't do things by halves with its Christmas decorations either. Bergdorf Goodman's windows are particularly appreciated for their style and sophistication. A different theme is chosen each year, and the window decorations enhance the fashion accessories and haute couture creations that are sold in the shop.

The windows of TIFFANY & CO

Also on Fifth Avenue, this famous jeweller's shop offers during November and December superb window displays where scenes are recreated to illustrate the magic of Christmas. The splendour of Tiffany & Co's finest jewellery is perfectly displayed in the modern and highly detailed settings.

Last but not least, Macy’s is probably the most famous shop in New York for its Christmas windows. Every day during the holiday season, tens of thousands of people come to gaze at the large windows of this shop, in Manhattan's Herald Square. In 1874, Macy's was the first shop to start this great tradition of Christmas window displays.
For more than a century, Macy's decorations have featured animatronics and animated decorations, and amusement park-like displays. As soon as January, a team of more than 200 people work to create these Christmas decorations. Nowadays, Macy's Christmas windows have become so iconic that their unveiling is a real event all by itself.