All about the Chinese New Year celebrations in New York

Chinese New Year is celebrated all over the world, but if there's one place outside of China where the festivities are particularly important, it's New York! Every year, the city's residents celebrate the Lunar New Year, and many events are organised for the occasion. If you're in the city in February and don't know yet what to do in New York, you should definitely check out the Chinese New Year's festivities! In this post, I'll take you on a tour of everything that awaits you if you go spend the Chinese New Year's Eve in New York.

WHAT IS THE CHINESE NEW YEAR? 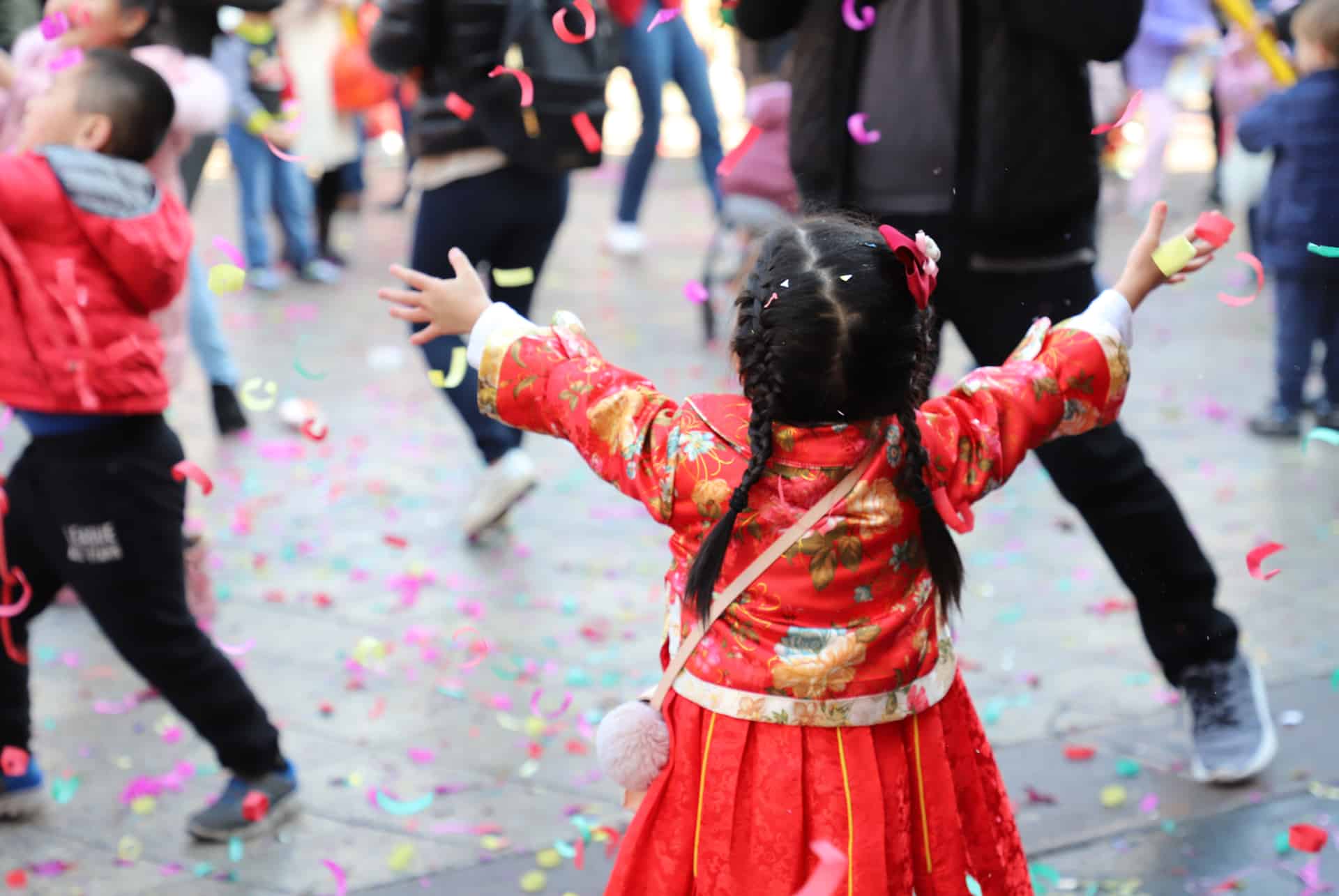 Chinese New Year, also known as Spring Festival, is the most important event in Chinese culture. As you might expect, it is the first day of the first month of the Chinese calendar.

This festival is based on a lunar calendar, which is why its date varies from year to year. The precise date of the Chinese New Year is the first day of the new moon, at the earliest on January 21 and at the latest on February 19, depending on the year... but the festival is in full swing for about a fortnight!

This festival is officially celebrated in several Asian countries: in China of course, but also in Taiwan, Hong Kong, Macau and Singapore, among others. The type of celebrations and its customs vary from region to region, but what all versions of this festival have in common is that it marks a time to put aside the bad things of the past and start afresh for a new year. This includes cleaning the house and displaying good luck charms in the form of characters written on red paper.

If you are planning to discover a lot of New York’s main attractions during your trip, I recommend the purchase of the New York City Pass. This tourist pass will give you many advantages throughout your stay, including access to 5 major tourist sites. What’s more, you will be able to choose among some of the activities offered (2 activities are fixed, but 3 are to be selected from a list of options). This pass is valid for 9 days 🙂

More than 620,000 Chinese residents live in New York – it is the largest Chinese community outside Asia. So it's not surprising that Chinese New Year is so important in the Big Apple!

For about two weeks, you can attend many festivities in the city's Chinatowns. The Lunar New Year period, in late January or early February, is a great time to visit Manhattan's Chinatown, but also Flushing Chinatown, New York's other major Chinese district in Queens.

In China, the New Year is mainly about celebrating traditional values such as respect for elders and gods. In New York as elsewhere in the United States however, this festival is a great tribute to Chinese culture in all its forms.

There are two particularly important events to attend: the Lunar New Year Parade and the Firecracker Show. 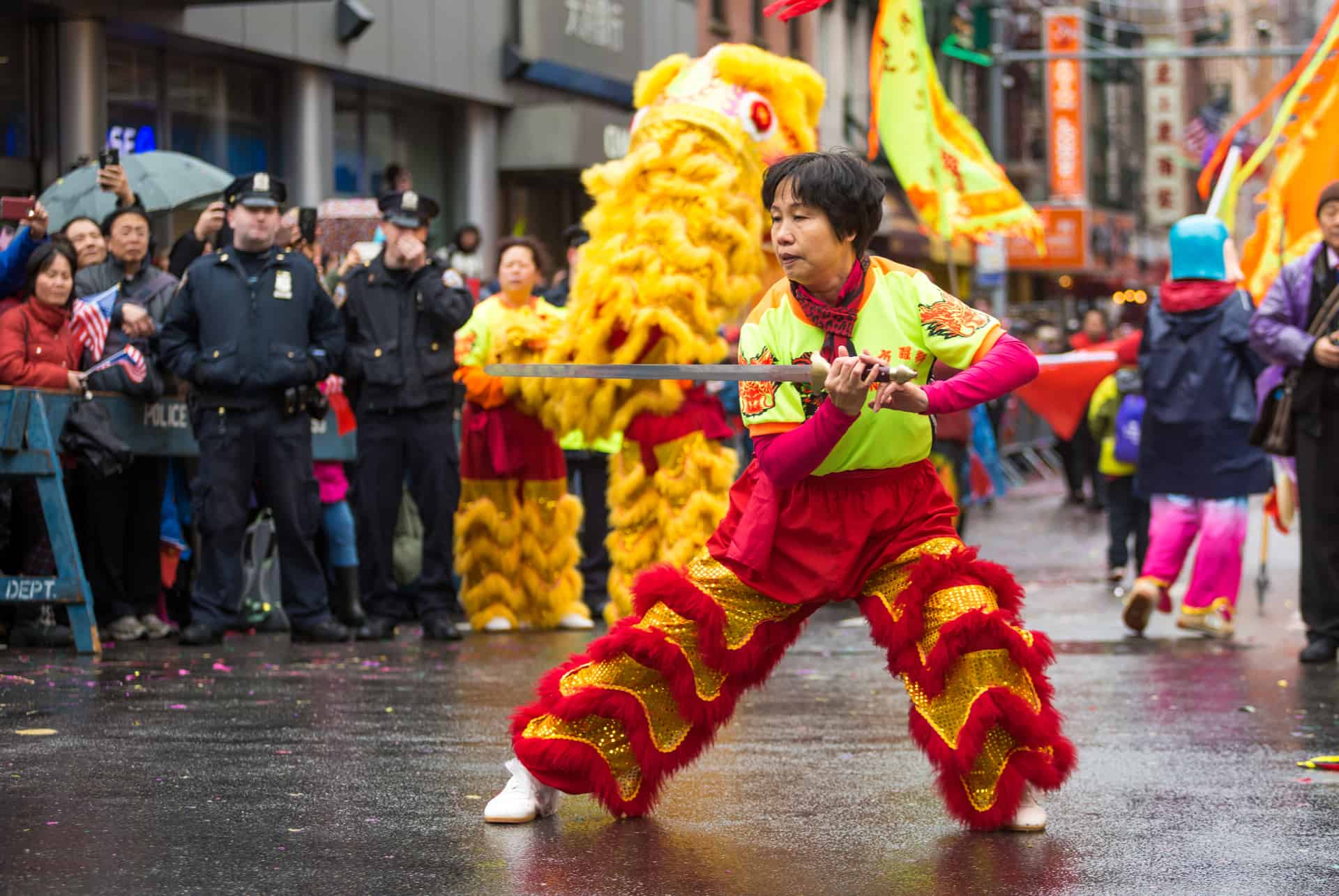 The Lunar New Year Parade is Chinatown's annual Chinese New Year celebration. The Chinese, Korean, Vietnamese and other Asian communities come to celebrate the Lunar New Year. On this occasion, you can discover many aspects of Chinese culture, attend parades in traditional costumes, as well as discover the famous Dragon Parade. During this impressive parade, which starts on Mott Street and winds its way through the main streets of Manhattan's Chinatown, you will see floats, acrobats competing in agility, martial arts demonstrations, but also the Dragon Dance.

This traditional dance features an oriental dragon – a mythical animal that is both frightening and benevolent – which in Chinese culture is a water spirit symbolising happiness and prosperity. Several dancers manipulate a large, colourful dragon that can be up to 70 metres long, using long rods attached to different parts of its body. This dance requires great skill to make the dragon's body move harmoniously, as if it were a water spirit waving to the rhythm of the drums…

THE FIRECRACKER SHOW FOR CHINESE NEW YEAR IN NEW YORK 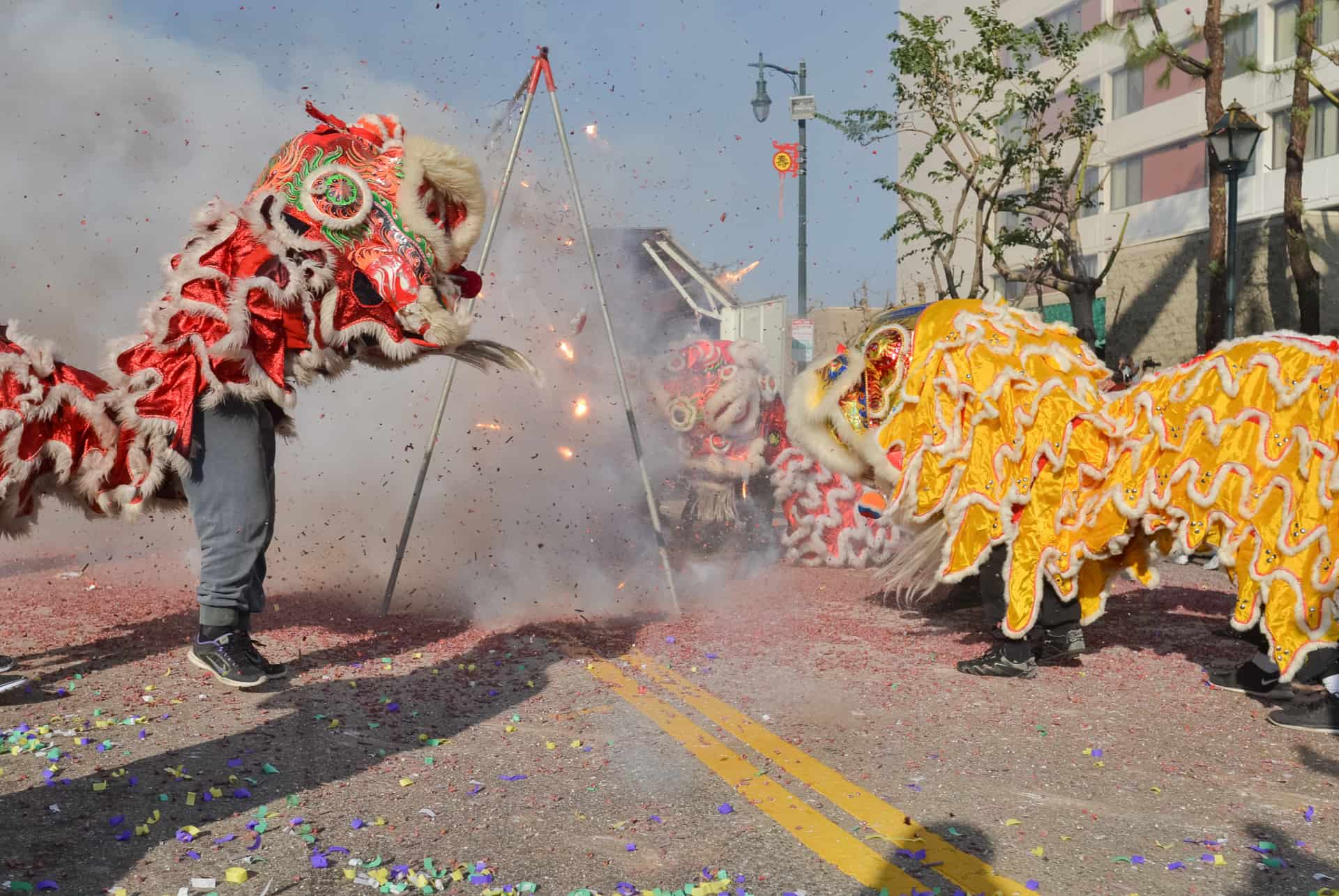 During this event – which usually takes place in the Sara D. Roosevelt Park, a large park on the Lower East Side of Manhattan – participants set off firecrackers in an attempt to scare away evil spirits.

The Firecracker Show also includes several festivities, including a 5 to 10 km run, a bike ride, or even a dog walk. A parade is also organised, during which you can watch the traditional lion dance: two dancers in lion costumes reproduce the movements of this wild beast, in order to bring good luck.

To end the festivities with a bang, a large fireworks display is organised in the evening. It is a most beautiful event 😊

This concludes my article! I hope you will have a great time – it truly is an amazing festival.