Rockefeller Center is a huge commercial complex located in the Midtown area of Manhattan.

It is composed of 19 buildings that house offices, shops and theatres known around the world. Rockefeller Center is one of the most popular tourist destinations in New York City, not only because of the Top of the Rock Observatory, but also because of Rockefeller Plaza and the annual events that are held there, such as the ice rink and the Christmas tree.

The history of the Rockefeller Center 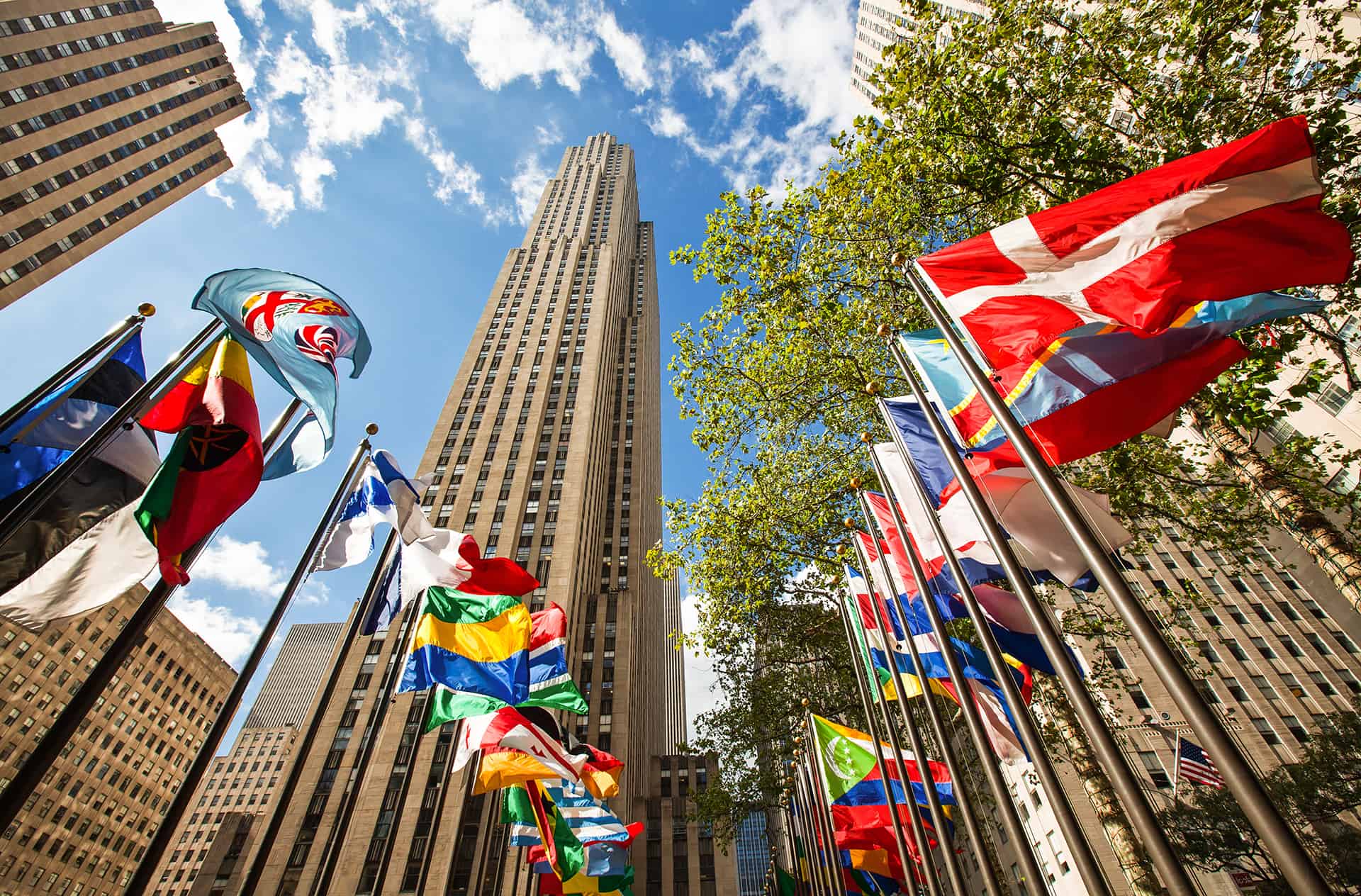 This project was of an absolutely unique scale for its time. This large complex of shops, offices and leisure facilities was designed from the outset to be a true city within a city. Rockefeller Center was soon to become a major economic centre of Manhattan, much like Wall Street.
After the crash of 1929 and during the economic crisis of the 1930s, ambitions had to be scaled back. Still, Rockefeller Center remained the most important private project during this period, thanks to the support of several radio groups, notably NBC.
The Comcast Building, formerly known as the GE Building and the RCA Building, was completed in 1933. It is still one of the most famous skyscrapers in New York, and even in the world. That same year, NBC and other radio stations set up their studios in the complex, which quickly earned the nickname "Radio City”.

In 1936, for the first time, the Rockefeller Center Ice Rink was opened to the public. It was originally intended to be a temporary attraction to promote the complex and attract a large number of visitors. It was an immediate success, and it was eventually decided to reopen the rink every year.

The construction was actually completed in 1939, and the buildings were fully furnished by 1941. With air conditioning and numerous elevators, this gigantic complex of ultra modern Art Deco style truly opened a new era in the history of architecture and urban design. It would later serve as a model for many other projects around the world.

After World War II, the complex continued to grow, and enjoyed its heyday during the following decades. The buildings were almost fully occupied, and four new towers were built during the 1960s and 1970s, including the headquarters of major companies such as Fox News and Time Inc.

The place you can't miss 🤩

If you pass by or visit the mall, don't miss the opportunity and climb on the shopping complex’s observation platform: Top of the Rock. From there, you will enjoy one of the most beautiful views you can have over the New York skyline, with the Empire State Building on one side and Central Park on the other.

I guarantee you will keep a great memory of it, and you will also be able to take some great pictures on top of that 😉

This being the most requested activity of the building (and in general), I highly recommend booking your seats as soon as possible. You will then be sure to be able to go there at the date of your choice, without having to worry about all the tickets being already sold out...

LEARN MORE ABOUT THE PLATFORM BY CLICKING HERE 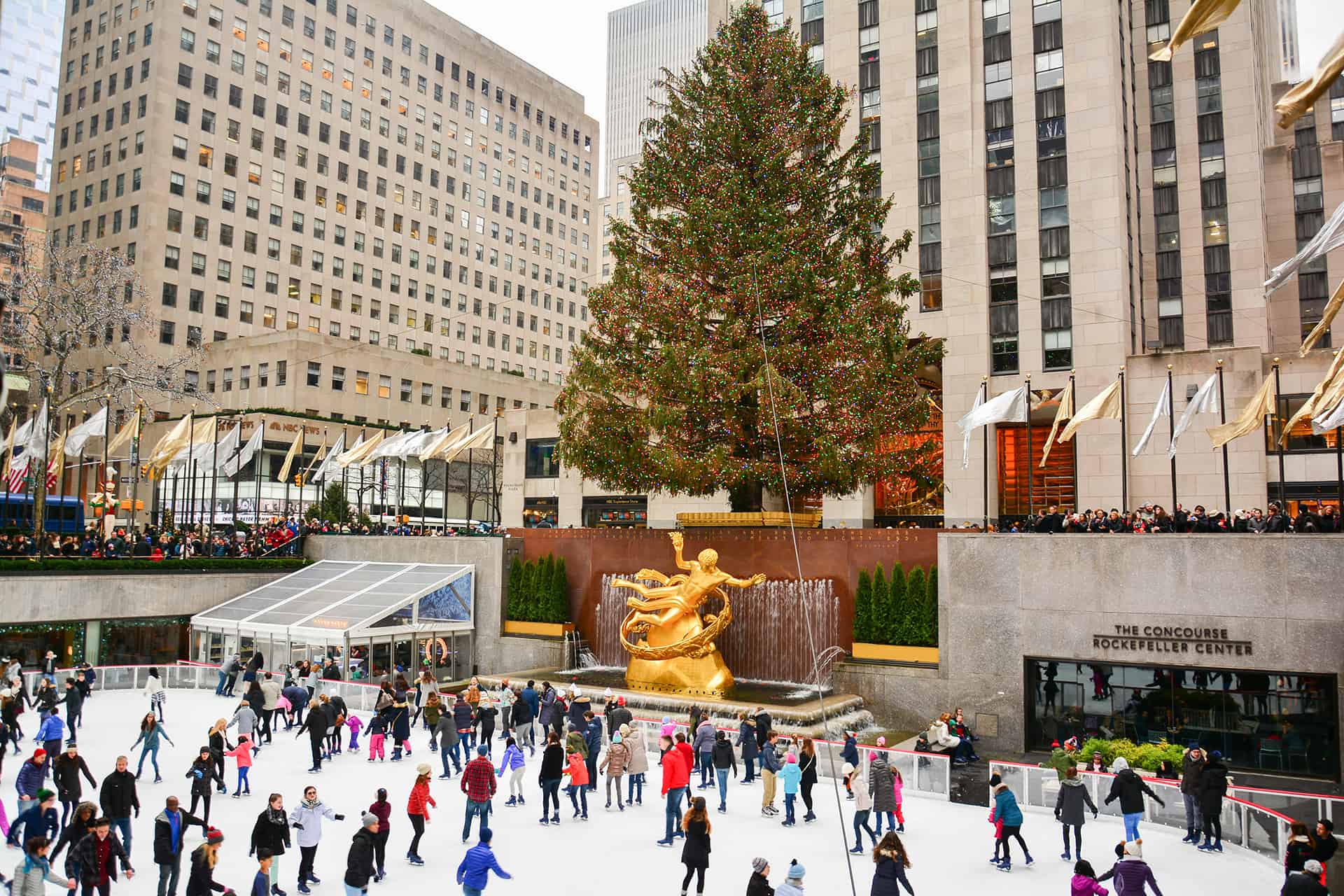 Although the Comcast Building is by far the most iconic building in Rockefeller Center, the entire complex is a truly symmetrical, clean-lined structure built in the Art Deco style that was very popular in the 1920s and 1930s.

The Comcast Building is a 70-story building, which measures a total of 259 metres high. Located in the centre of the complex, it stands out from the other skyscrapers in Manhattan by the originality of its architecture. Unlike other large buildings designed in the same period such as the Chrysler Building and the Empire State Building, it has no spire, and its flat roof was designed to evoke the deck of a cruise ship.

In addition to the buildings, the complex also houses gardens and several plazas. The gardens were designed to bring a little more colour, and create a contrast with the grey of the buildings.

A SYMBOL of ART DeCO 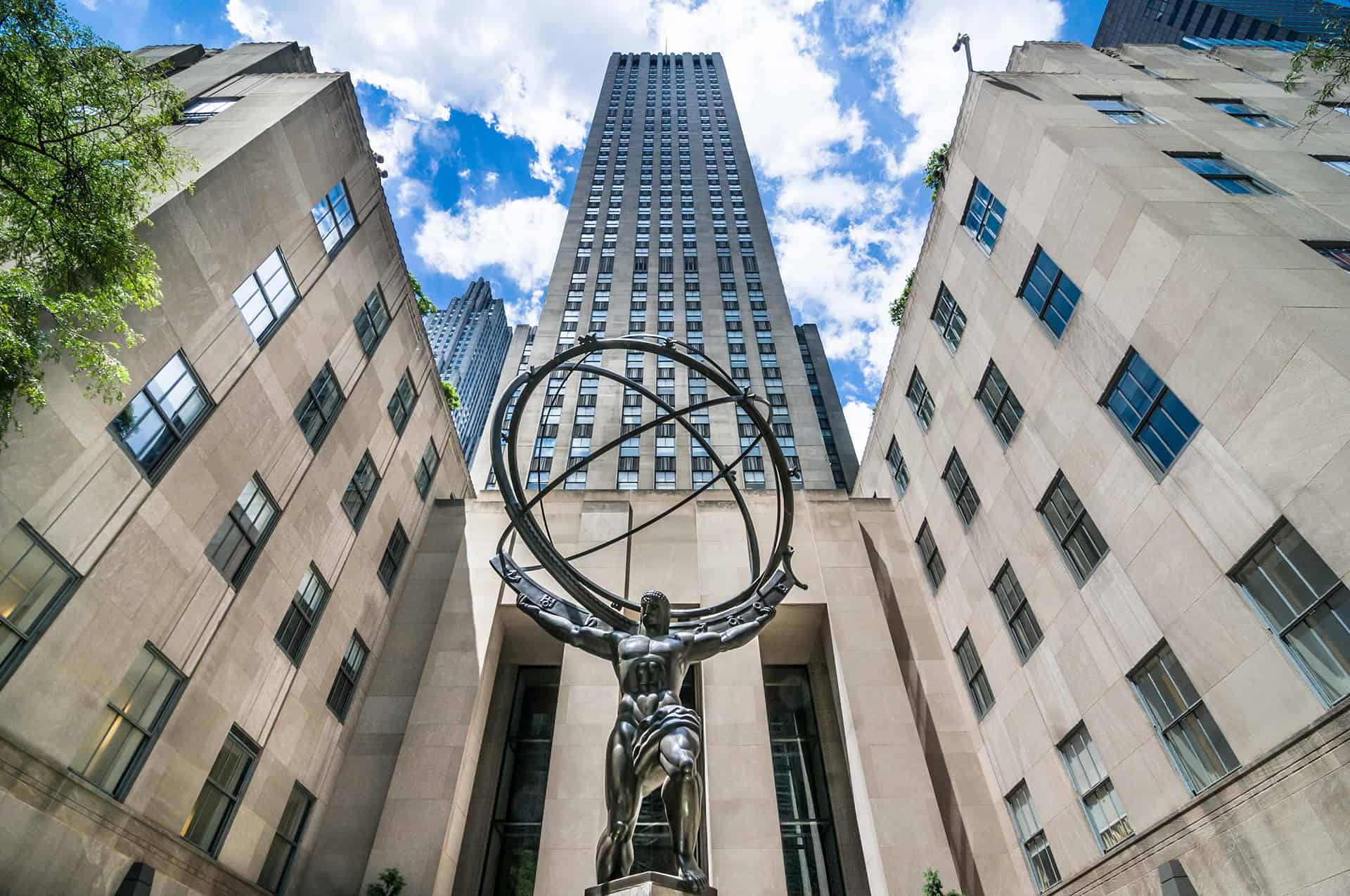 This complex is a major site of modern art. In the 1930s, 39 artists from all walks of life worked together to create the interior and exterior decorations of Rockefeller Center. Statues, murals and mosaics, more than a hundred works were created to make a unique Art Deco decoration.

Of the many statues in Rockefeller Center, Atlas s and Prometheus are the most famous.

The statue of Atlas is the largest in the entire complex. Facing St. Patrick's Cathedral, it depicts the titan Atlas carrying the heavens on his shoulders. The statue of Prometheus bringing fire to mankind is probably even more iconic. At the centre of a fountain in front of 30 Rockefeller Plaza, this gilded bronze statue is one of the symbols of Rockefeller Center.

On the walls of each of the buildings, mosaics, reliefs and friezes are placed to present the functions of the place. For example, at the west entrance of the Comcast Building, you can find a mosaic panel called Intelligence Awakening Mankind. Made with more than a million pieces of glass, this gigantic fresco of 26 metres long evokes the sound in an allegorical way, reminding that the building houses notably the NBCstudios .

On the facade of the Comcast Building, a bas-relief by the famous sculptor Lee Lawrie overlooks the entrance. Entitled Wisdom, this work made of glass and painted limestone contrasts hugely with the huge grey building that rises above it.

On the facade of the Comcast Building, a bas-relief by the famous sculptor  Lee Lawrie overlooks the entrance. Entitled Wisdom, this work made of glass and painted limestone contrasts hugely with the huge grey building that rises above it.

Places to discover at the Rockefeller Center

The Top of the Rock 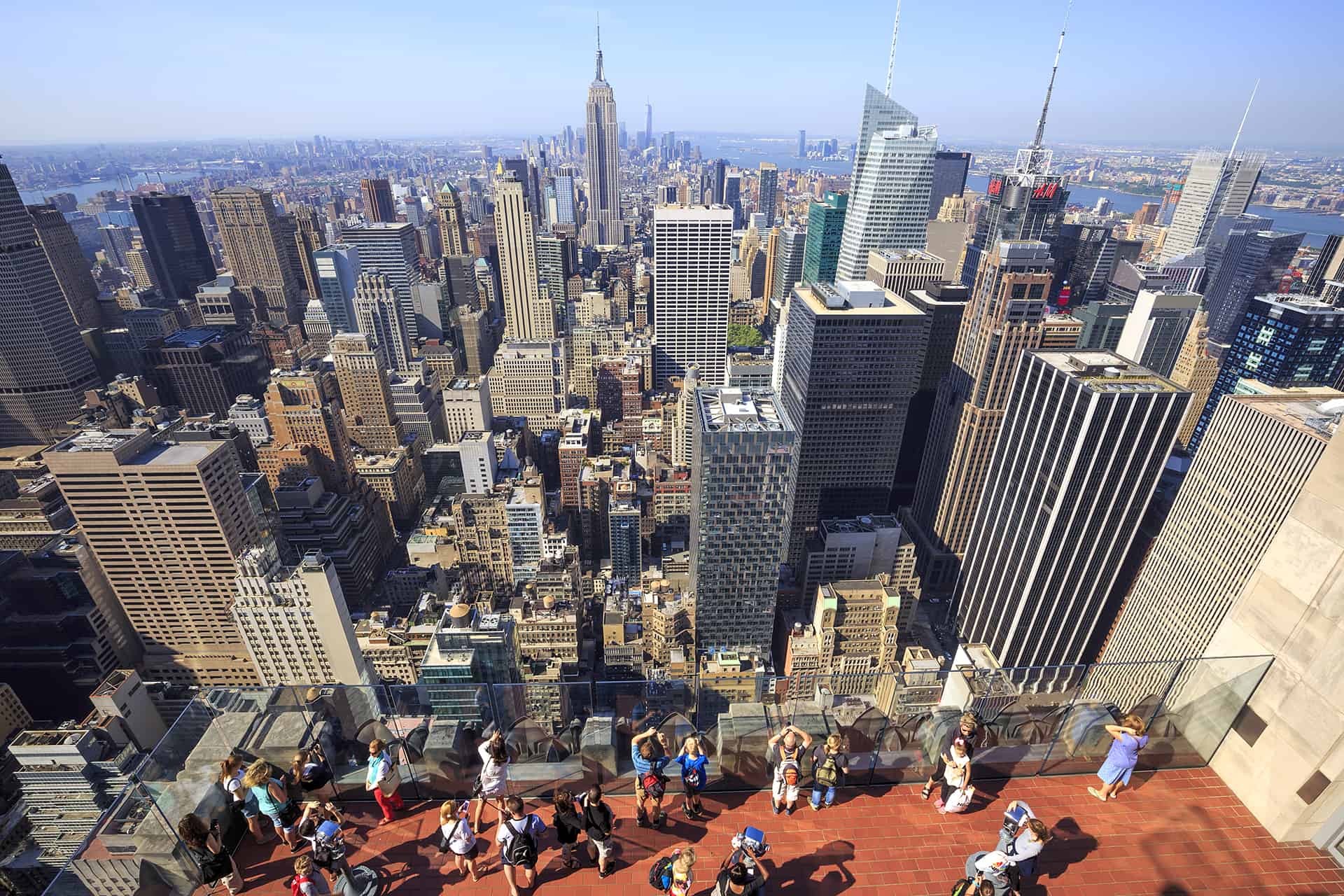 This is the most famous spot in the complex, and one of the most popular tourist sites in all of New York City, welcoming over 2.5 million visitors each year. On the 70th floor of the Comcast Building, you can venture to three observation platforms, located indoors and outdoors, and enjoy the amazing 360-degree views!

To the south, you can see the Empire State Building, Lower Manhattan and even the spire of the Chrysler Building. To the north, you can see the greenery of Central Park and all the bustle of Times Square... At any time of the day, you’re sure to enjoy a unique view from these viewing platforms!

In order to make sure you will be able to access on the day of your choice, I can only advise you to book your seats in advance. Being the main attraction of the monument, there are always people up there. It would be a shame to be unable to go up on the platform during your visit to the complex.

Originally, an opera house was to be built in Rockefeller Center. Following the stock market crash of 1929, the project was cancelled, but the complex was transformed into a number of performance halls. Radio City Music Hall is the most famous of these venues. It is home to The Rockettes, the legendary dance group that performs in the annual Radio City Christmas Spectacular, one of the most watched musical shows in the United States.

The venue also hosts some major events, such as the MTV Video Music Awards and the Grammy Awards.

If you would like more information or would like to attend the Radio City Christmas show, you can follow this link.
If you have the opportunity to attend a physical performance of the show during your stay, you wouldn't be disappointed 😊 The quality of the shows is always more impressive each year!

Located under Rockefeller Center, you will have the opportunity of visiting the shopping arcades. You can access them by taking an escalator from the lobby of the Comcast Building. Many major brands are located in these malls, including the Body Shop, Façonnable and Nintendo World. In addition to the many stores, the malls form an underground network between 47th and 51st Streets, which is ideal for moving from one building to another in bad weather. 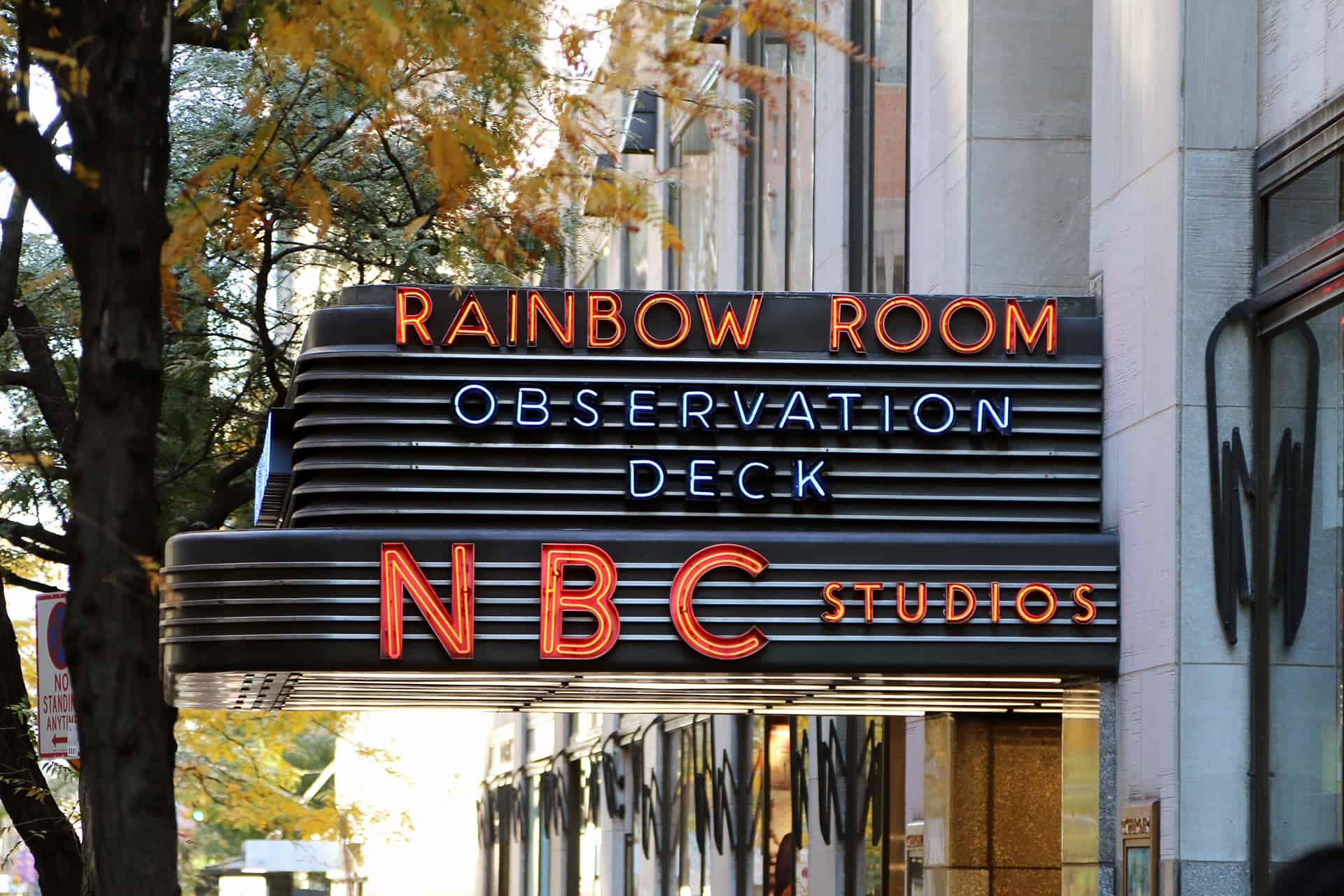 If you want to get a behind-the-scenes look at a major television network, you can visit the historic NBC studios. On a guided tour, you will be able to access some of the sets of very popular shows in the United States such as Saturday Night Live or Late Night. The tour is filled with highly entertaining dramatisations, and you'll need to understand English to get the most out of it.

Throughout the year, from this plaza, you can access a restaurant and a bar, but also admire the facades of the buildings, and discover some of the most prestigious decorations and ornaments of the complex, like the statue of Prometheus. In the fall and winter, this is where you can find The Rink, the famous outdoor ice rink. It is there that one of the most prestigious Christmas trees in the world is installed, during the holiday season.

The Rainbow room and SixtyFive

On the 65th floor of the Comcast Building, you can find an elegant restaurant. This historic Rockefeller Center venue was completely renovated and reopened in 2014. It's a popular spot, and if you want to have a meal at the Rainbow Room, you'll probably need a reservation. Remember to ask for a table near a window to enjoy the view.

On that same floor, you can also access the SixtyFive bar. Here too, you can enjoy a particularly impressive view of New York. The SixtyFive is a great place to have a drink after a performance at the Radio City Music Hall. Both of these establishments are quite upscale, and proper attire is required.