ALADDIN: THE MUSICAL ON BROADWAY

During your stay in New York, you will inevitably want to discover Broadway– Manhattan’s mythical avenue, famous throughout the world for its shows. One of the most popular musicals of recent years is Aladdin, the adaptation of the 1992 Disney classic.

If you want to have the opportunity to see Aladdin at the New Amsterdam Theatre, on Broadway, then I recommend booking your ticket beforehand/in advance?. This way, you won't have to wait: you will be sure to have a seat – and you may even get a ticket at a very good price.

In the following lines, I will introduce the Aladdin musical and give you all the information you need to buy a ticket and enjoy the show during your stay in New York.

THE STORY OF THE ALADDIN MUSICAL 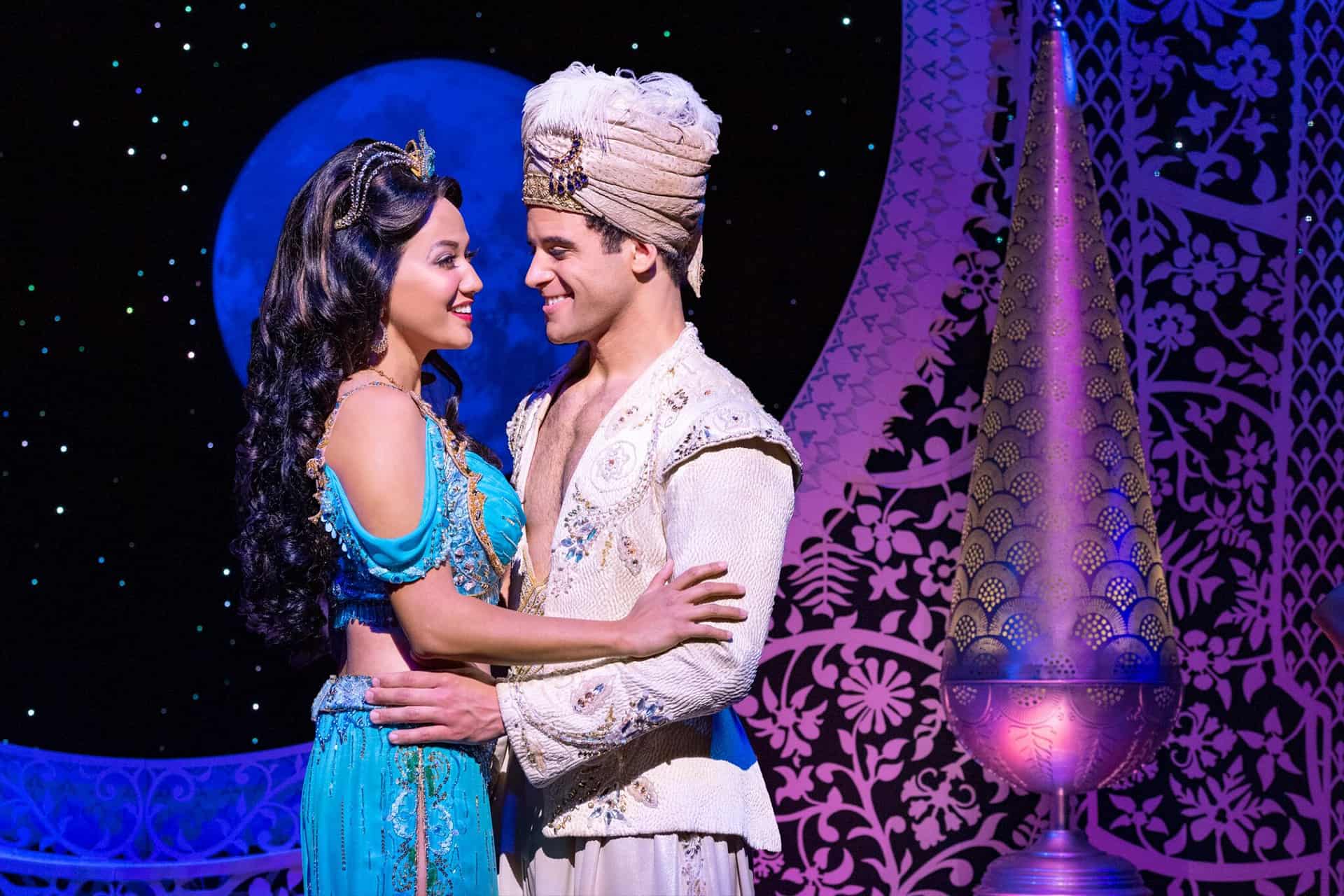 The musical follows the adventures of Aladdin, a young resident of Agrabah, who survives day to day by stealing food from the market. After a misadventure, he meets Princess Jasmine and finds himself imprisoned – accused of trying to kidnap her.
Jafar, the Grand Vizier and advisor to the Sultan, who secretly dreams of taking the throne, learns of a mysterious cave containing a magic lamp which will grant its owner three wishes. Unwilling to risk entering the cave himself, he decides to use Aladdin to retrieve the lamp. The young thief discovers the magic lamp and brings out a genie with immense powers, who will grant the three wishes he holds most dear. Aladdin, who has fallen for Princess Jasmine, makes his very first wish: to become a prince... But will he be able to seduce the beautiful Jasmine, with Jafar doing everything he can to eliminate the Sultan and take his place?

ALADDIN ON BROADWAY: AN ENCHANTING SHOW

More than just a Broadway musical, Aladdin is a real family blockbuster – an excellent production for which every means has been used to ensure that the audience lives a magical moment. In a deluge of colours and lighting effects, all of the cartoon’s sets have been reproduced on stage, and you will immediately be plunged into an atmosphere worthy of the best tales of the Arabian Nights. Nothing is missing – not even the famous flying carpet scene!

Of course, all the songs from the Disney classic are performed during the show, such as Prince Al and A Whole New World. But the show also takes liberties with the original work. The writing is more modern, the humour is even more prominent, and several new songs have been composed especially for this musical.

THE BEST SEATS TO ENJOY THE SHOW

Broadway’s Aladdin takes place in the New Amsterdam Theatre, one of Broadway's most distinctive venues. It is a fairly old theatre, which first opened in 1903 before becoming a cinema in 1937. In 1994, the Walt Disney Company bought this theatre, like many others in the area, and completely renovated it, with the help of renowned engineers and artists.

As such, the theatre is extremely well designed and you will enjoy a very good view of the representation no matter where you sit in the room. The only thing that might interfere with the view, if you are in the balcony, is a support pole. However, acoustics were a major concern during the renovation, therefore you will not have to worry: you will be able to hear the actors and singers perfectly no matter which seat is yours.

Seats will have different prices depending on the seating location of your choice. Sitting in the Mezzanine is a good compromise: it is a great location to see the entire stage and special effects, and the seats there are not among the most expensive!😊 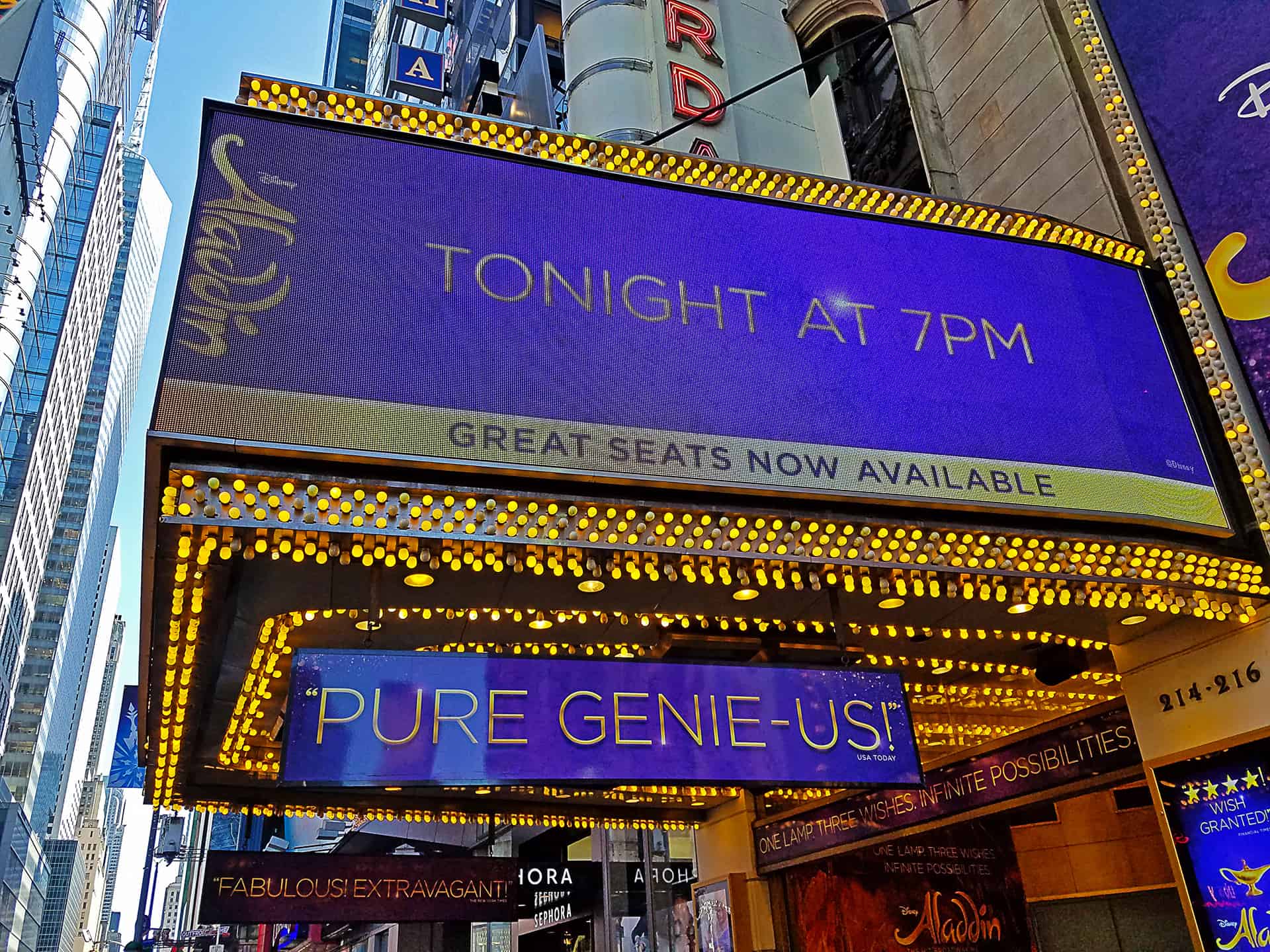 This show, which has been playing since 26 February 2014, has quickly become one of the most popular Broadway musicals. The theatre sells out for almost every performance, so ticket prices are quite high. It will be much more convenient to book your ticket online. Note that if you buy several tickets at the same time, you will always be seated next to each other.

The first prices start at:

TO VIEW AVAILABILITY AND PRICES FOR YOUR DATES OF STAY, CLICK HERE

These prices vary by row. The most popular tickets, those in the centre of the orchestra area, can cost over $500 (£420).

GREAT DEALS ON TICKETS TO THE MUSICAL ALADDIN

If you believe in your lucky star, or if you suddenly feel like attending a performance of Aladdin while in New York, you can try your luck at one of the TKTS stands. These booths, located in several places in New York City, can offer discounts on unsold tickets.
Aladdin is an extremely popular comedy, so it is rare that tickets for it are available at these booths, but it may still be worth a try, especially if you are travelling outside of the peak tourist periods. Even if no tickets for Aladdin are available, you may also be able to find a good deal (up to 50% off) for one of the other Broadway shows. You can find TKTS booths in Times Square, Lincoln Center and Downtown Brooklyn, among other places.

The other way to get the cheapest tickets is to use the ticket lottery. All you have to do is register for the draw and if you are lucky, you can get two tickets with very good seating places for only $30 each (£25). The draws take place no later than 7 pm the day before the performance.

As you can see, these two options may allow you to get tickets for a much lower price, but you can never be sure of getting them. If it is indeed the musical Aladdin that you want to see during your stay, buying tickets on the internet is really the best solution to make sure you’ll have a ticket to see this show.