It is impossible to visit New York without passing through Times Square! This famous square is an integral part of New York and its history, and an emblematic site with an extraordinary atmosphere.

That's why it's one of the first places you should go to see when you arrive in the city – no matter what time your plane lands!  😉

What to do in TIMES SQUARE ?

Times Square is one of the busiest squares in the world. The place is in perpetual effervescence day and night, and it is here that you will best realise that New York is a city that never sleeps!

Along with the visit of the Empire State Building, the Statue of Liberty, and the discovery of Central Park, Times Square is a must – especially if you don't know yet what to do in New York!

I propose to discover right now in this article all the things you can see & do in Times Square.

Note that it is also possible to discover this place during a guided tour. Most of the guided tours in the city include this square in their program because of its importance and notoriety.

Other tours (which last about 2 hours) focus exclusively on Times Square and Broadway, which is just around the corner. Having a local guide with you will give you a deeper insight into the history and secrets of the square and the city. And your guide will be able to share his good tips and advice for the rest of your stay – that's always worth taking 🙂

FIND OUT MORE ABOUT THE GUIDED TOURS BY CLICKING HERE

It's impossible to overlook the giant billboards in Times Square! These giant screens that cover the façades of the buildings have, for the most part, been bought by large companies for a period of 10 to 12 years. They continuously broadcast their advertisements: for plays, shows, TV series or various products (make-up, cars...).

The rental price is about 2.5 million dollars for one month!

MEET THE FAMOUS CHARACTERS OF THE SQUARE 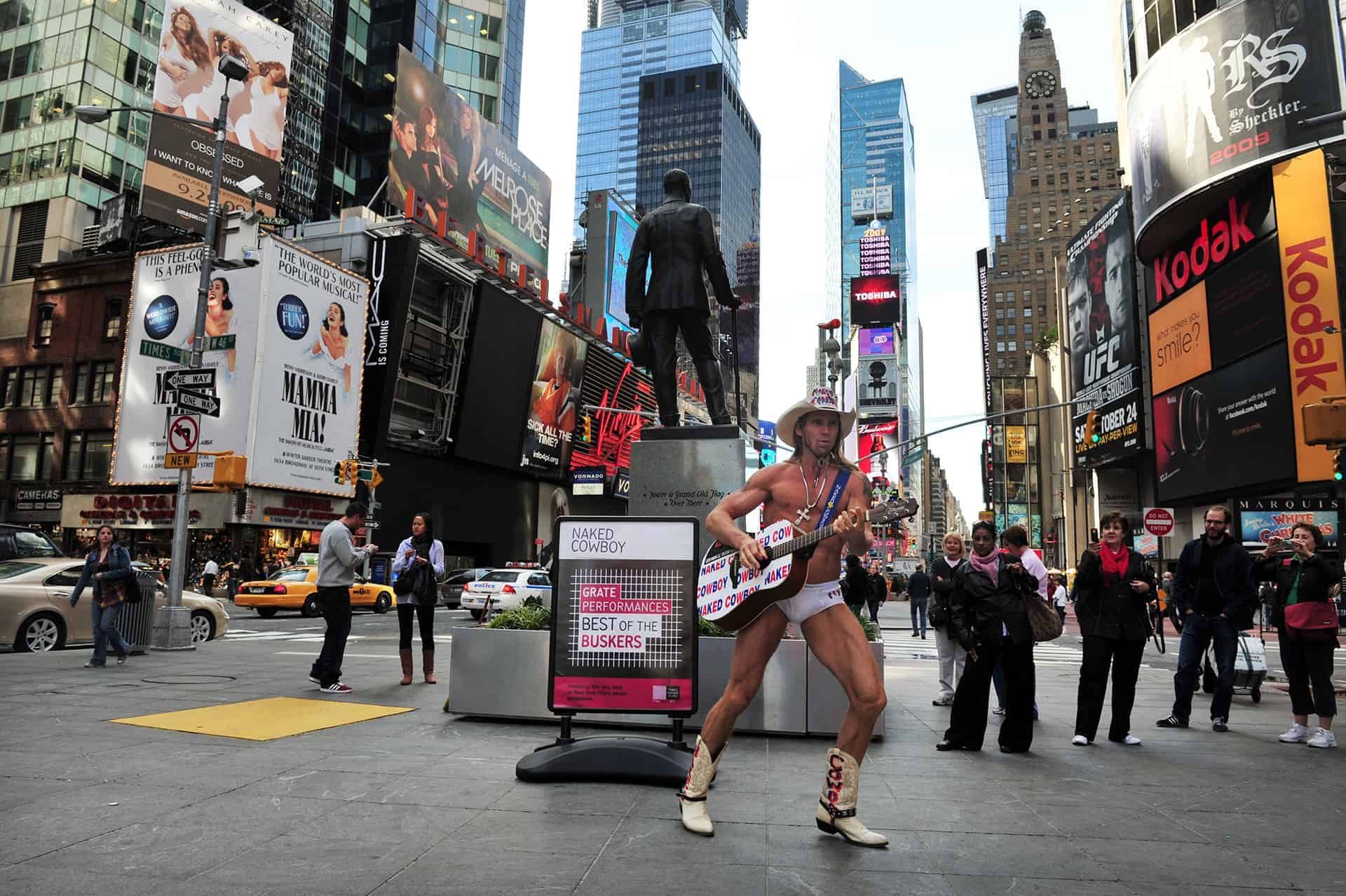 Many of the characters in Times Square are dressed as superheroes (Spiderman, Captain America...). They will approach you and offer to have you take a picture with them – for a tip of course!

The most famous is the cowboy in white kangaroo briefs, the "Naked Cow Boy". He is always there singing, in summer and in winter, with his (also white) hat, his cowboy boots and his guitar.

Go and stand on the red stairs of Times Square. These 27 steps, built in 2008, form the roof of the TKTS box office (which sells tickets for Broadway shows). If you sit on them, you will be 5 metres high, which will give you a nice view of Times Square.

As an aside, did you know that the show "Good Morning America" is set in Times Square? 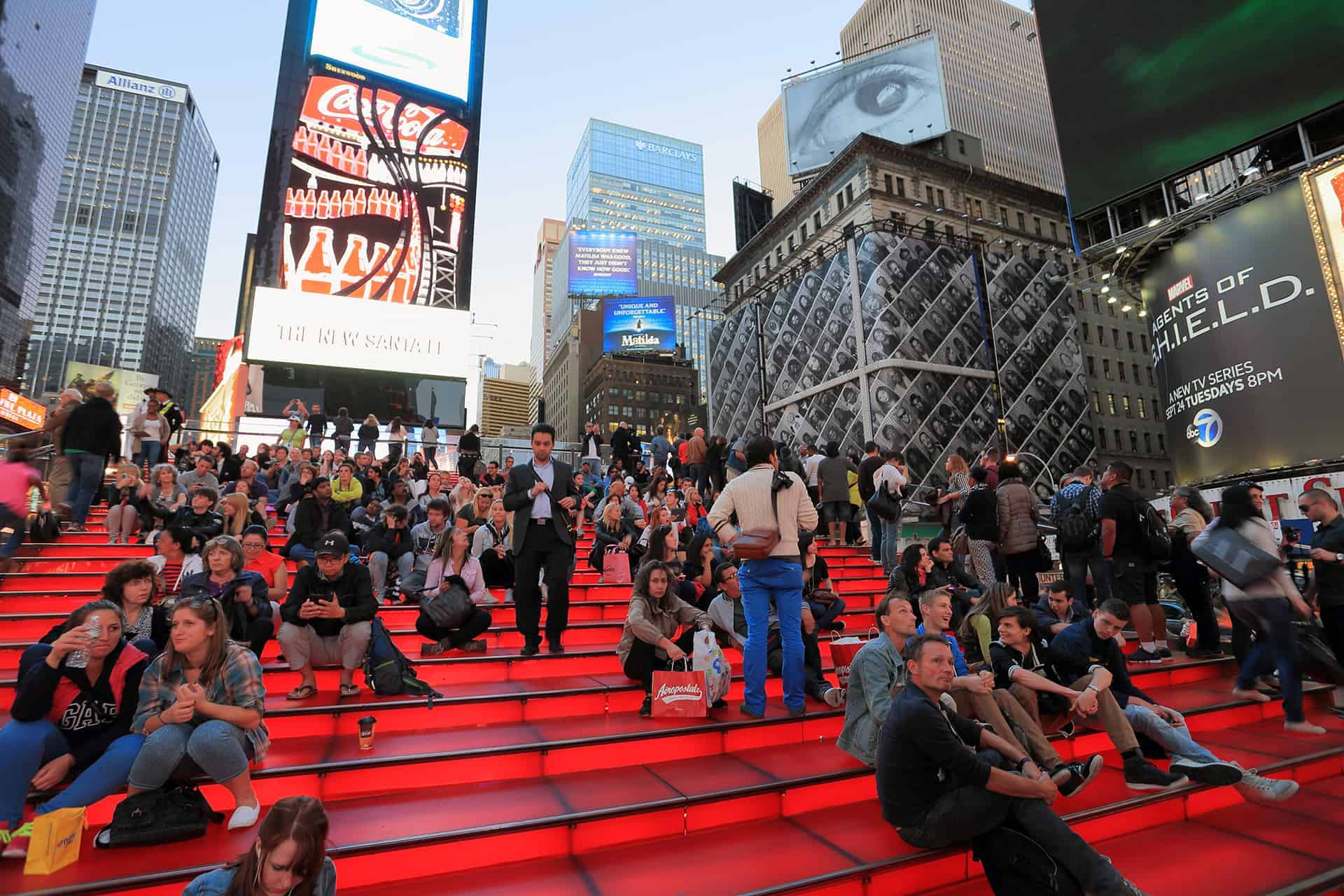 Also note that if you buy $10 worth of merchandise in the American Eagle shop, you can have your picture taken on the top floor of the shop. This photo will then appear 15 minutes later on the screens outside the shop. It will be your little moment of glory in Times Square 😉

Most of the restaurants in Times Square are themed restaurants such as ‘Planet Hollywood’ at 1540 Broadway, New York or the ‘Hard Rock Café’.

You can eat salads, fries, burgers or sandwiches.

If you are in the mood for seafood and fish dishes, head to the "Bubba Gump", inspired by the film Forrest Gump (address: 1501 Broadway – New York).

You can also buy food to go from a food-truck or even opt for a romantic meal at a chic restaurant such as "Le Bernardin" (French cuisine) or "R Lounge" (American cuisine). Unless you're more into Italian food, in which case opt for La Masseria. 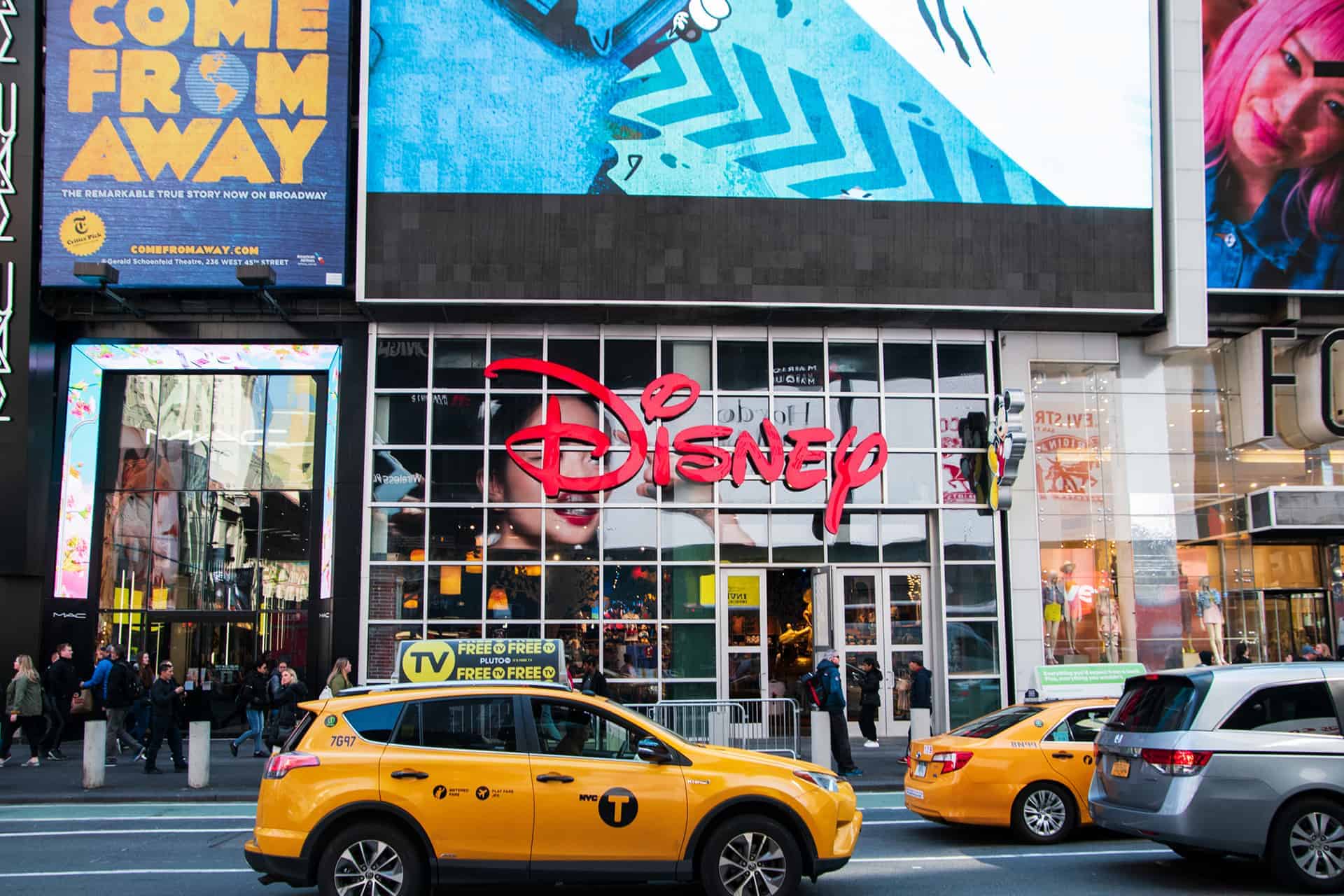 There are many branded shops in Times Square. Some of them are true attractions (for young and old alike) and are not to be missed, such as the "M&M's Store", the "Disney Store" and the "Levi's Store".

For clothes, you have H&M, Gap, American Eagle Outfitters and Forever 21. And as for beauty products, you can go to Sephora or Mac.

There are also many souvenir shops in the square, including the Grand Slam shop where you can buy the famous "I love NY" t-shirts.

ENJOY THE VIEW OF TIMES SQUARE FROM THE TOP

At the panoramic bar of the Marriott Hotel (48th floor), The View, you can enjoy a nice view of the whole square, but also of the Empire State Building, the Rockefeller Center and the Hudson River. Indeed, the bar turns on itself and it takes an hour to go all the way round! Just the time to savour an amazing cocktail.

The prices are rather expensive, but it's well worth it! Don't forget to make your reservations before you go to New York though!

Go see a musical in Broadway

There are many musicals on Broadway – the heart of Times Square. Choose from the most famous ones such as "The Lion King", "Cats", "Aladdin" or "Phantom of the Opera". They are always on the bill.

Of course, you can also get tickets for more recent productions such as 'Wicked', 'Frozen' or 'Diana'.

There are no subtitles, but the show will remain in your memory even if you don't understand English very well.

While you're there, take a look at the oldest theatre in the area, the New Amsterdam. It was founded in 1902!

In Times Square, you can visit some museums like “Madame Tussaud” with its 200 wax statues, or the “Ripley's Believe It or Not!” with its collection of weird and wacky objects.

The “Discovery Times Square Museum” is also a place you’ve got to visit. Located in the former “New York Times Building”, it houses interesting temporary exhibitions of culture, art and history.

If you're in New York on December 31st, you should of course head to Times Square to see the New Year.

The square is packed tight: a million people wait for the countdown while watching on a screen the celebrations in other countries around the world. A concert is organised and a few minutes before midnight, a big ball, the "Waterford Crystal", is hoisted on the roof of the building located at  One Times Square (which was the former offices of the New York Times Magazine). This ball drops down at midnight.

The experience is just incredible... And the event is broadcast live on television and watched by millions.

What you need to knwo about Times Square 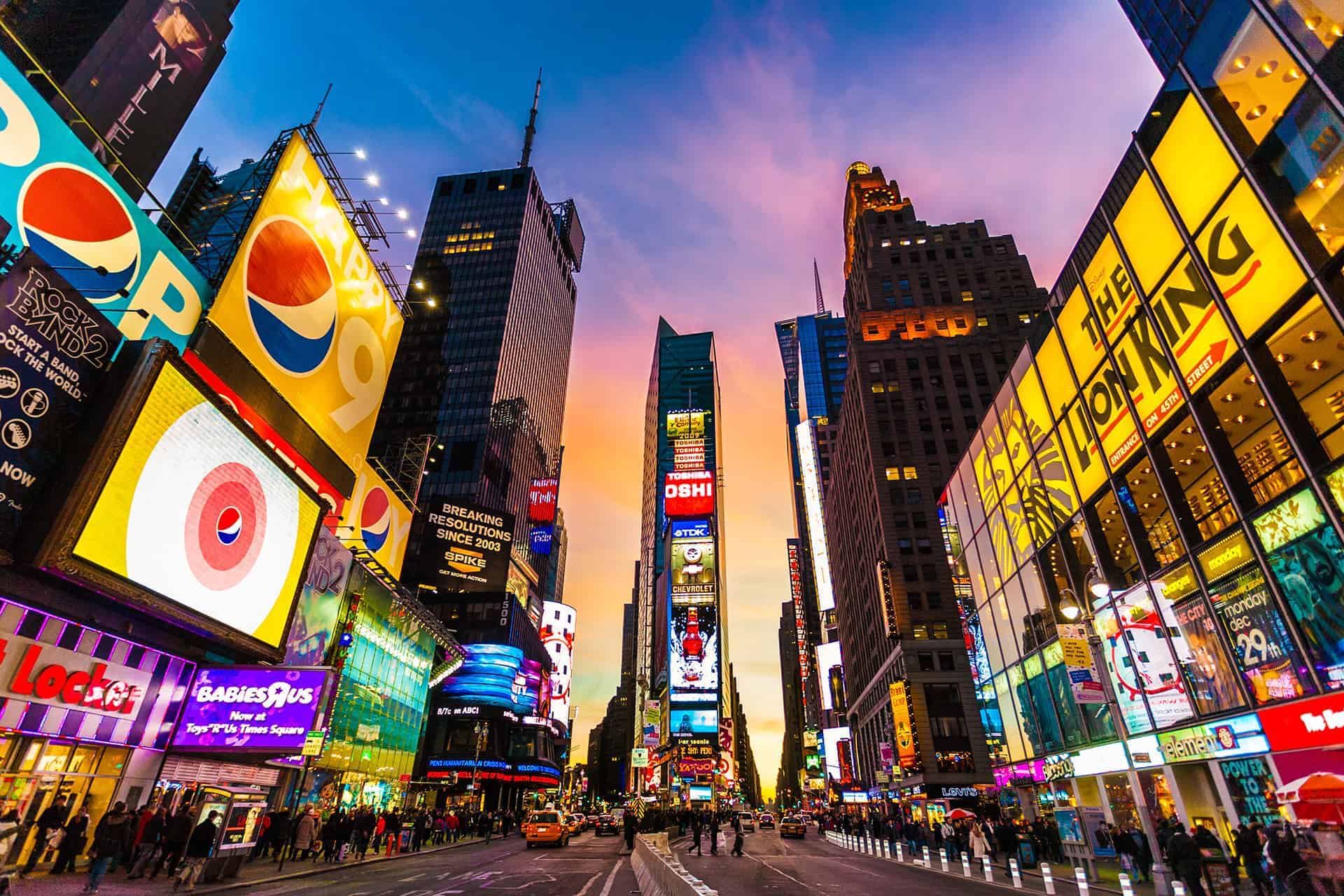 Times Square, now one of the most famous squares in the world, was in the late 19th century a popular place for horse hires. It was then called "Longacre Square". The square did not take its current name until 1904 when the famous newspaper "The New York Times" set up its offices in a tower at 1 Times Square (the Times Building).

By the 1920s, Times Square was a lively district known for its theatres, music halls and hotels. It was also an advertising paradise. The first advertisement was posted on the wall of a bank (at the corner of 46th Street and Broadway). Afterwards, the biggest brands jostled for advertising space.

However, from the 1950s until the 1990s, Times Square went through a dark period. The square became a place of debauchery, prostitution and delinquency. But the new mayor, Rudolph Giuliani, decided to make it one of the most dynamic districts in the city. A successful gamble!

How to get to Times Square ?

Times Square is open all the time. The square is located at the heart of New York City, between 42nd Street and Broadway, in the Manhattan area (west of Midtown).

You can also stop at the Port Authority station and walk to Times Square.

You have reached the end of this article. I hope you enjoyed it and found it useful! 😊