VISITING STATEN ISLAND: WHAT TO DO & SEE

Staten Island is one of the five boroughs of New York. Although this borough is mostly known for its ferry, the island is well worth spending some time on during your stay in New York.

Shopping, parks, historical and cultural sites... In this article, you will discover everything you can do during a visit to Staten Island.

The history of Staten Island in a few words

Staten Island was discovered in 1524 by Giovanni da Verrazzano, and was then inhabited by the Algonquin Indians . It became a trading post at the beginning of the following century, but while the other boroughs of New York were developing, Staten Island remained a very rural area for a long time.

In the late 19th century, the island officially became a borough of New York. It was not until the construction of the Verrazzano Bridge in 1964 that Staten Island really began to become a very urban area.

How to get to Staten Island ? 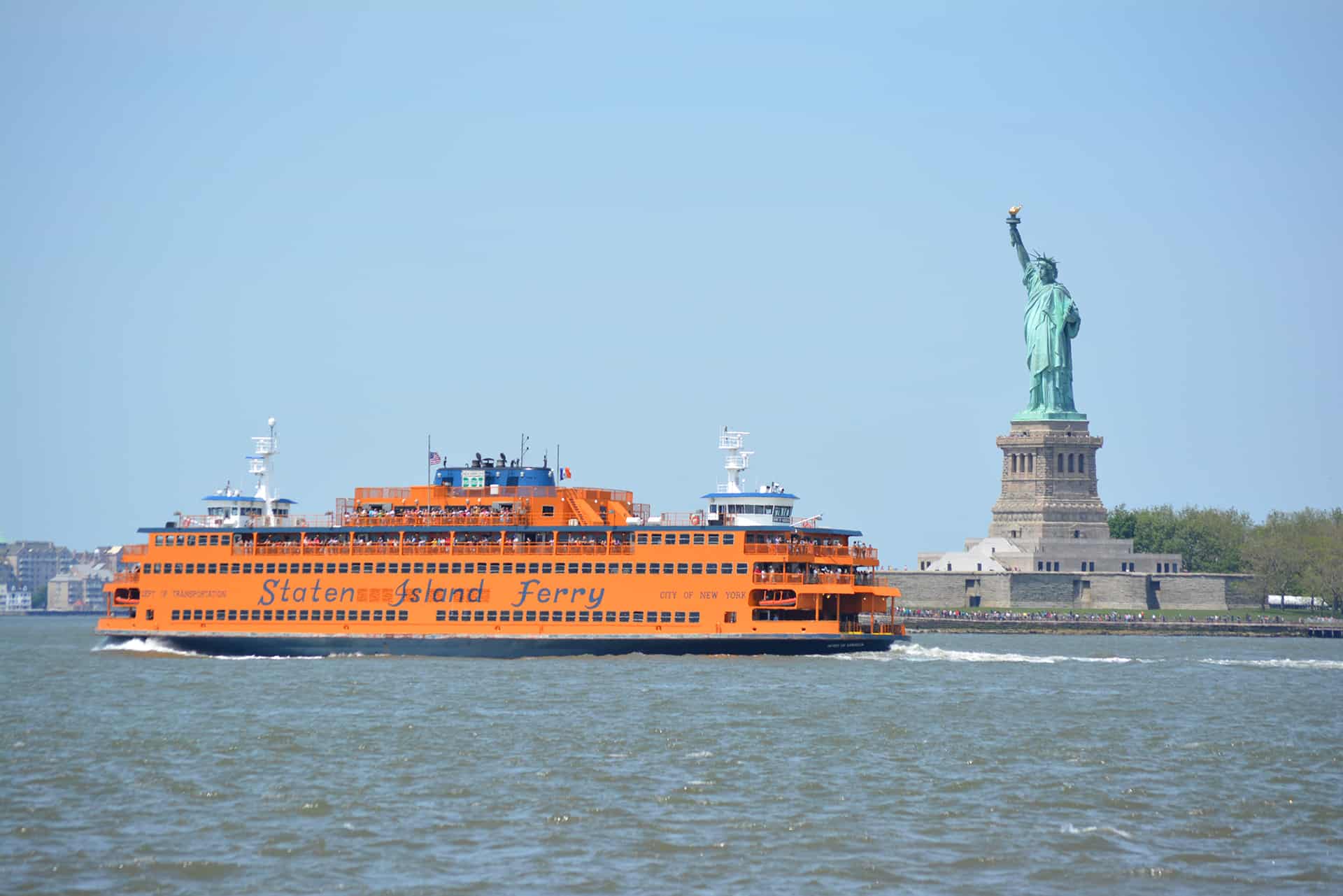 To get to Staten Island, simply take the Staten Island Ferry. This ferry is completely free and runs 24/7 all year. It departs from Manhattan and reaches Staten Island.

Before taking the ferry, I have only one piece of advice to give you: don't rush. The boats leave on a regular basis, and you should have no trouble getting on. Especially since being the last to board on the outbound trip will allow you to turn around and admire the view as the boat sails away from Manhattan.

As this ferry is free, many people take it just to enjoy a great view of the Manhattan skyline and the Statue of Liberty during the trip. This privileged view is of course a big advantage, but as we will see in the rest of this article, it would be a real shame to go right back in the opposite direction and not take the opportunity to discover this little-known borough of New York in greater depth.

Top things to do in Staten Island

Staten Island is often confused with Ellis Island and Liberty Island. Far from being a small island housing a tourist site, this island is in fact the third largest borough in New York.

It is admittedly much less well known than the other four – Manhattan, the Bronx, Brooklyn and Queens. It is also the least populated of all. But that doesn't mean you can't find some particularly interesting sites to see when you visit Staten Island. After taking the ferry to the island, there are several places to discover that are well worth a visit.

Have you considered a tourist pass? 🎫

While in New York, you will definitely want to discover as many sites and places as possible. When you add up the price of each entrance, this budget can very quickly become substantial. That's why there are different New York tourist passes that allow you to visit several sites all while respecting your predetermined budget.

If you book the New York Pass, for example, it will give you access to more than 100 activities in the city (including the most famous ones: the Empire State Building, several city museums, Top of the Rock...). You will be able to consult the list of all the activities included in the pass.

MORE INFORMATION ON THE PASS BY CLICKING HERE

As you already know, New York is THE city for fashion lovers and shopaholics. In Manhattan in particular, you will find big brand boutiques, small designer shops and world-famous shopping centres. But if you want a good deal, the best option is the Outlets shops – and for that, Staten Island is the place to go.

Empire Outlets is the only major Outlets mall in New York City. Although fairly new, it has already become a must-see attraction on Staten Island. It is located right next to the ferry terminal, so you won't have any trouble getting there during your stay in New York. Moreover, it's only a 20-minute ride from Manhattan, and the trip will certainly not bore you.

In this centre located on the waterfront, in addition to enjoying a beautiful view of Manhattan, you will find more than a hundred shops. Inside, you can find products of all kinds, but there’s a special place for clothes and fashion accessories Empire Outlets is the place to go to find designer clothes from H&M, Nike, Old Navy and many other brands, all at rock-bottom prices.

This large shopping centre is spread over four levels, covering more than 100,000 square metres. This shopping paradise does not have a large indoor hall, but all the shops are located on either side of a large open-air area on the oceanfront.

There are plenty of benches around small green areas – perfect for taking a break before heading out in search of bargains. 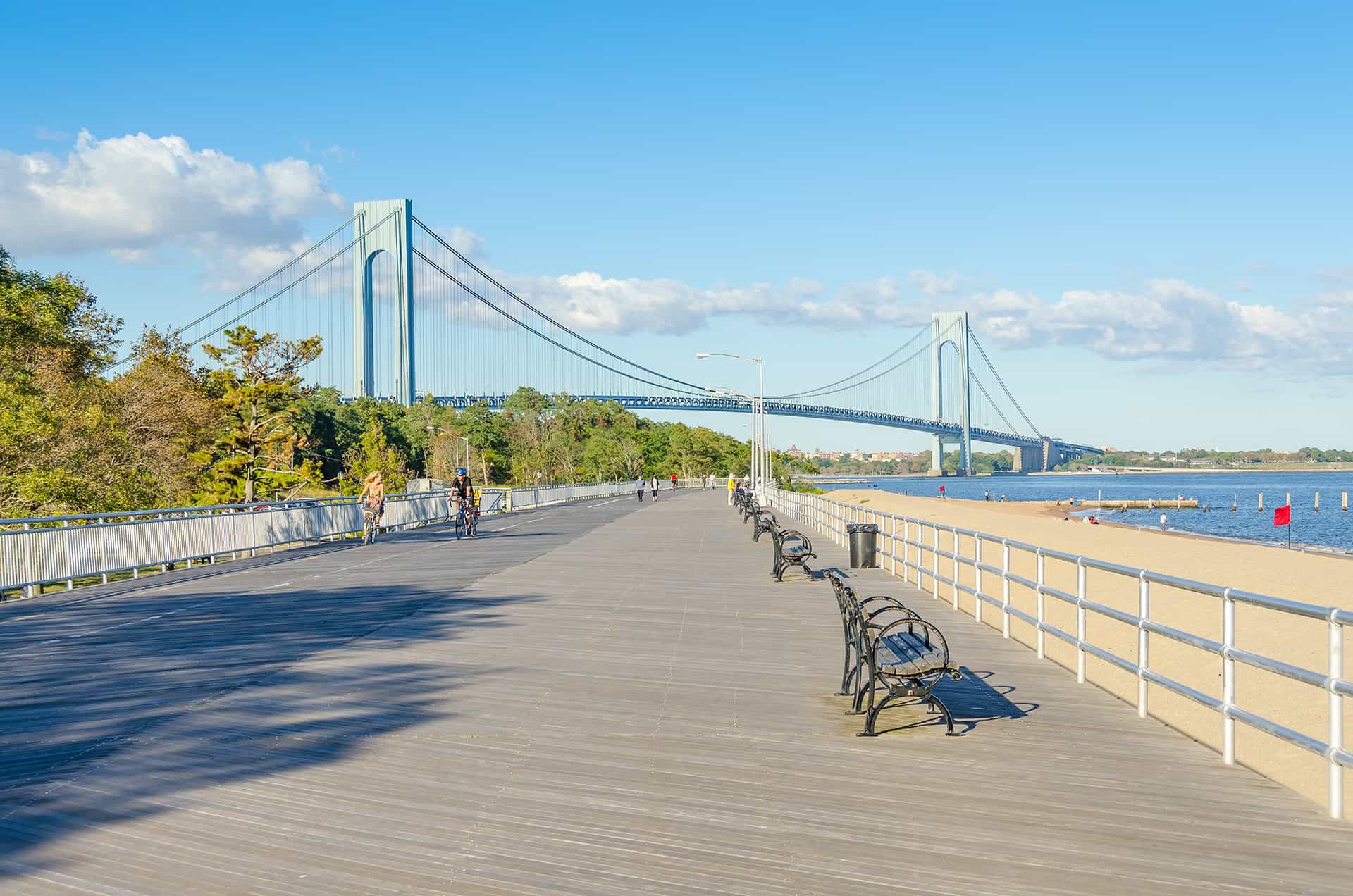 The Verrazzano-Narrows Bridge is a metal suspension bridge that crosses the Narrow Strait from Staten Island to Brooklyn. At almost 1,300 metres long, it is the longest suspension bridge in the United States, and one of the 15 longest in the world.

Today it is known as the starting point for the New York City Marathon. The bridge is not accessible by foot or bicycle outside of the marathon period, but it remains a favourite spot for photographers.

Just under the bridge, on Staten Island’s side, is Fort Wadsworth. It is one of the oldest military installations in the country, used to monitor the main entrance to New York Harbor.
It was closed in 1994 and is now a public park where you can visit the underground tunnels leading to the lighthouse and enjoy a unique panoramic view of the Verrazzano-Narrows Bridge, New York Harbor, Brooklyn and Manhattan. 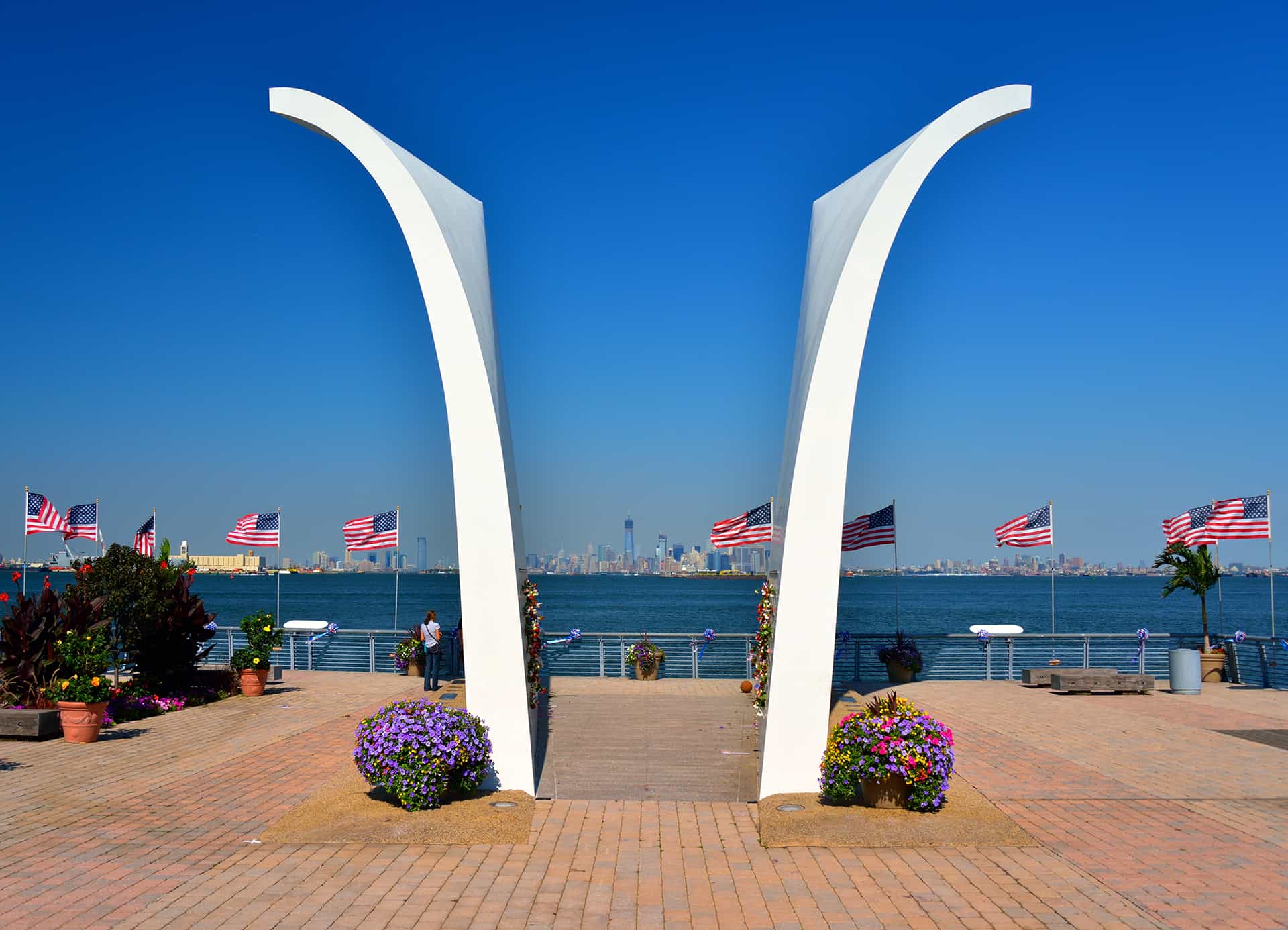 On Staten Island, another memorial, much less well known than the one in Manhattan, pays tribute to the victims of the September 11 attacks. This sculpture, which was created in 2014, is dedicated to the many Staten Islanders who lost their lives in the terrorist attacks.

On each of these wings there are multiple marble plaques shaped the form of a face in profile, and on each of them is engraved the name of one of the victims.

This zoo is located in the West New Brighton neighbourhood, on the north side of Staten Island. It is not the largest zoo in the city, but it currently houses over 1,500 animals of about 350 different species. The Staten Island Zoo Zoo is a great place to spend time with your family.

The zoo was originally all about reptiles, and is still very famous for its lizard and snake collections. It has the largest collection of rattlesnakes on the continent.

Many events are organised throughout the year: each new animal has its own welcome party, for example. The zoo is divided into about 20 zones, each of which houses different species of animals. In addition to the reptile wing, there is a large aquarium, an otter pond and areas dedicated to leopards, Saharan animals and Australian animals. 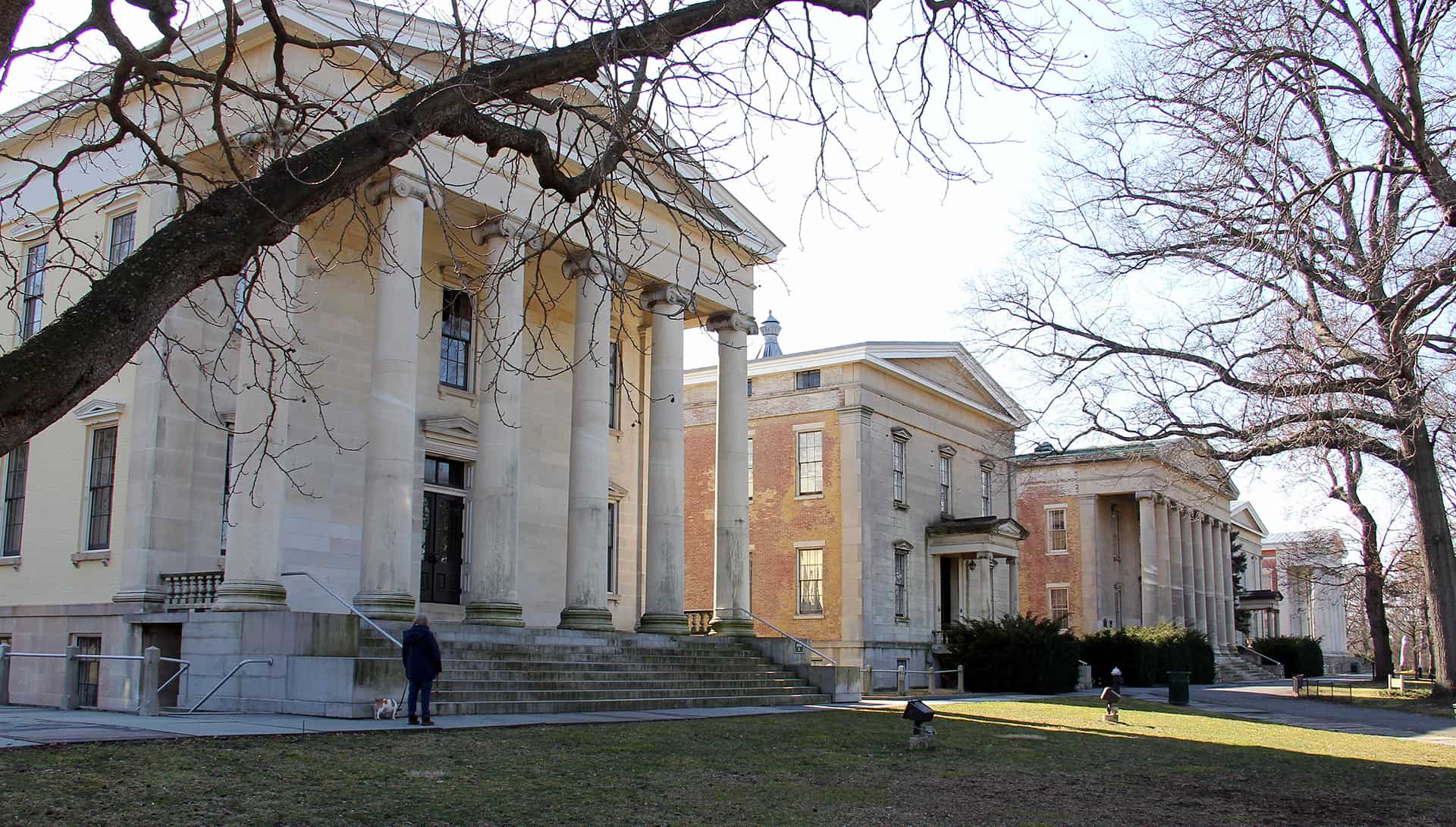 Staten Island doesn't have the biggest museums in New York City, but it does have one particularly interesting cultural venue.

The Snug Harbor Cultural Center is a must-see if you want your Staten Island visit to be complete. It features gardens and historic buildings that house museums. You can walk around most of the gardens for free, and even take the opportunity to have a picnic away from the noise of the bustling central New York area. In total, you can visit 17 dufferent gardens, including a botanical garden, a rose garden, a vegetable garden, a butterfly garden and a Chinese garden.

You'll also find some of the most interesting museums on Staten Island:

And that's it for this article on Staten island! I hope you enjoyed it and found it useful 😊