VISITING QUEENS: WHAT TO DO & SEE

Queens is one of the five boroughs of New York. Located south of the Bronx, it is the largest borough in the city, and with more than 2.3 million inhabitants, it is also the second most populous borough, just behind Brooklyn. Although not as famous as Manhattan, Queens is nevertheless a very popular place for its great cultural diversity. Queens is very large and consists of about 60 districts, often very different from each other.

In the following lines, I will tell you a bit more about this borough and some of the most interesting sites you can discover during your visit there.

The history of Queens

Queens owes its name to the wife of Charles II of England, Queen Catherine od Braganza. In the second half of the 17th century, the area was first populated mainly by English and Dutch settlers. It was only in 1898, more than 200 years later, that Queens was finally officially incorporated into New York City. At that time, Queens had almost one-tenth the population of Brooklyn.

In the three decades following the construction of the Greensboro Birdge in 1909, the borough experienced several large waves of immigration and welcomed large numbers of residents from countries such as Ireland, Italy and Greece. 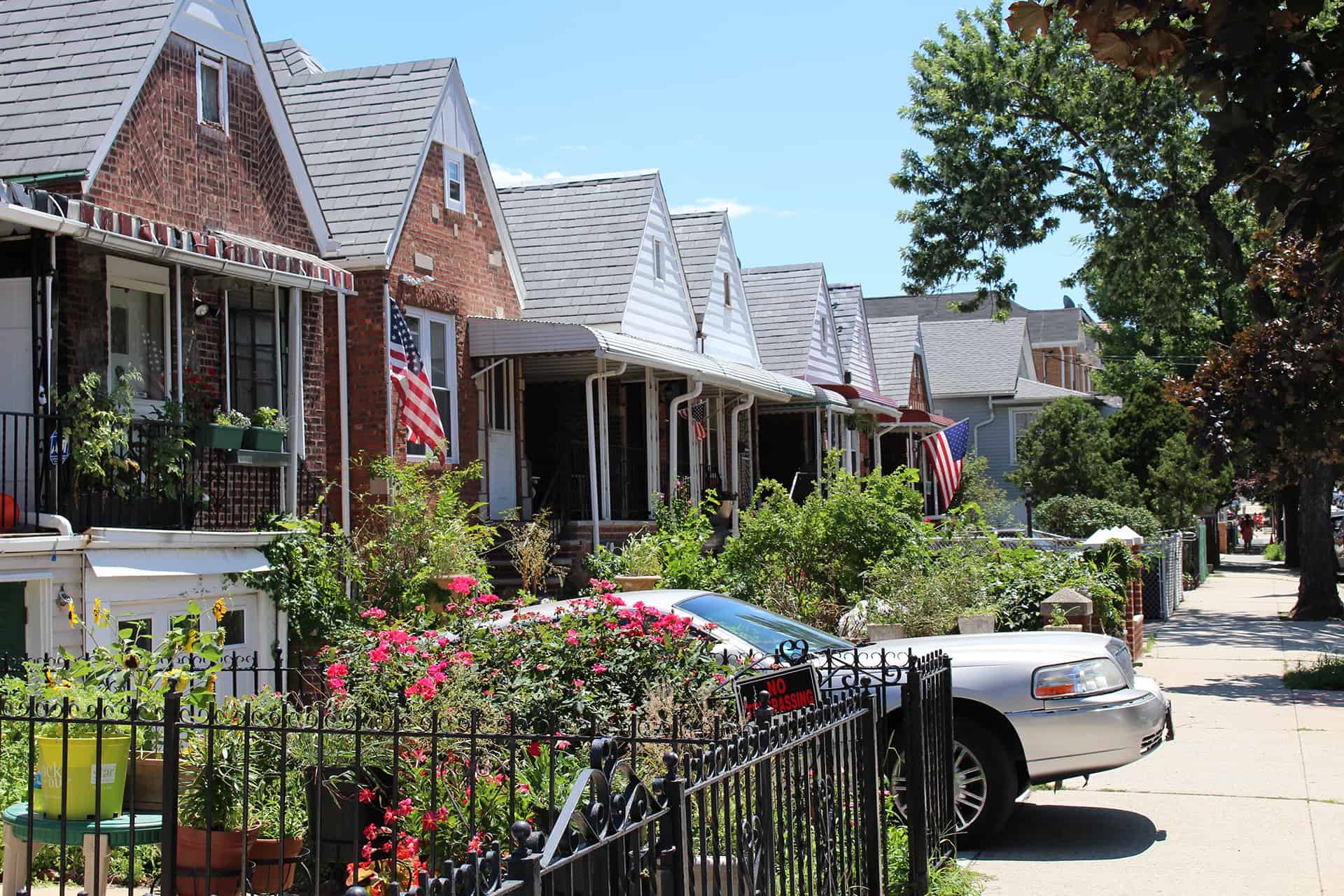 Queens is now almost as populated as Brooklyn. It is often said that New York is the most cosmopolitan city in the world, and Queens is a perfect example of that. It is by far the most multi-ethnic borough in New York, with residents from over 130 countries. It is this unique cultural diversity that gives Queens much of its charm today.

Queens is also one of New York boroughs that has the highest population growth, with nearly half a million more people moving into the borough in the last decade.

The reason the borough is so popular is that rents are still much lower than in Manhattan, and although it is geographically very well located, Queens is also a borough with a lot of space. The population density is almost half that of the Bronx or Brooklyn, and more than three times less than that of Manhattan.

From Manhattan, you can take a bus tour of various neighbourhoods including Queens, the Bronx and Brooklyn.

During the tour you will see the differences between the different neighbourhoods that make New York so multicultural, cosmopolitan and attractive.

During the 5-hour tour, you will be guided through the city and make stops at various locations. The advantage with this kind of tour is that you will see a variety of things in a short time and it will allow you to have a global view of the different neighbourhoods that make up New York City 😊

TO FIND OUT MORE ABOUT THE TOUR, CLICK HER

Of the dozens of neighbourhoods in Queens, many are mostly residential and only a few truly symbolise the soul of the borough, and are of great interest when visiting New York. 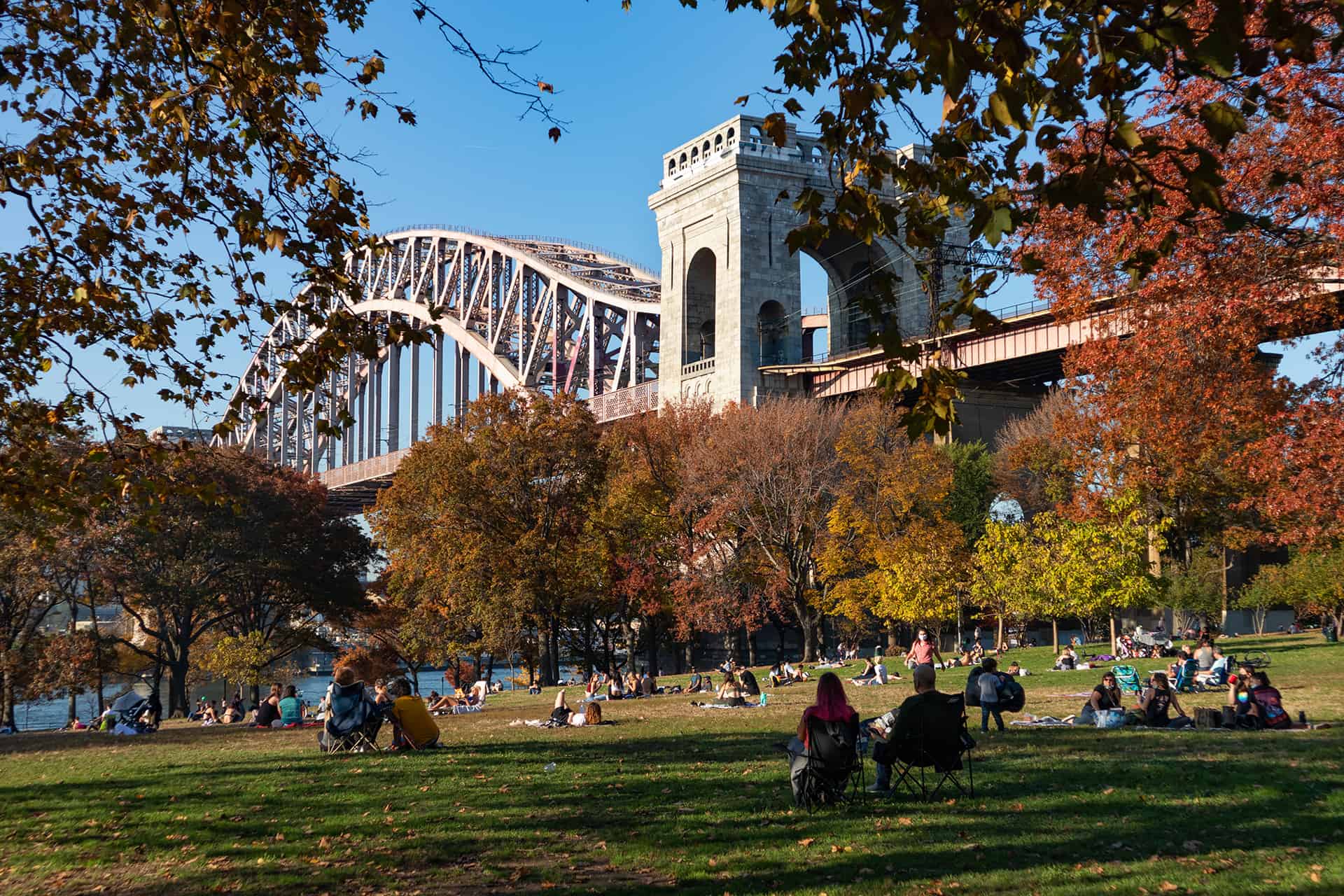 The Astoria neighbourhood is located along the East River, north of Queens. This neighbourhood has changed a lot in recent years and is now one of the most fashionable places in New York. More and more Broadway actors and artists are moving here, which is why it is often referred to as "Actoria".

This neighbourhood is very active on the cultural level. You can find museums such as the Museum of Moving Images, and several beautiful Orthodox churches such as St. Catherine & George and St. Markella's Cathedral, which bear witness to the days when Astoria was New York's Greek Quarter.

At Astoria Park, you can have a picnic, go for a run and even swim in the oldest and largest pool in the city.

Long Island City is Queens’ other neighbourhood, along the East River. It is particularly appreciated for its greenery and its proximity to Manhattan. It is the artistic centre of Queens, where you can find many art galleries and museums, including the MoMa PS1.

At Hunters Point South Park, you can relax on the grass and enjoy beautiful sunsets. Gantry Plaza State Park is an old port that has since been reorganised, and from which you can enjoy a great view of the Manhattan skyline, which is just across the East River. You can see the Empire State Building and the Chrysler Building, for example.

This particularly cosmopolitan area is a great place to have a meal in Queens. You will be able to find establishments that serve food from all over the world. Casa Enrique  is a Mexican restaurant that is perfect for a quick bite to eat. Tuk Tuk is one of the most popular restaurants in the area, serving delicious Thai food. And for a classic American meal, you can go to Benjamin Steakhouse and enjoy hearty dishes and beautiful cuts of meat. 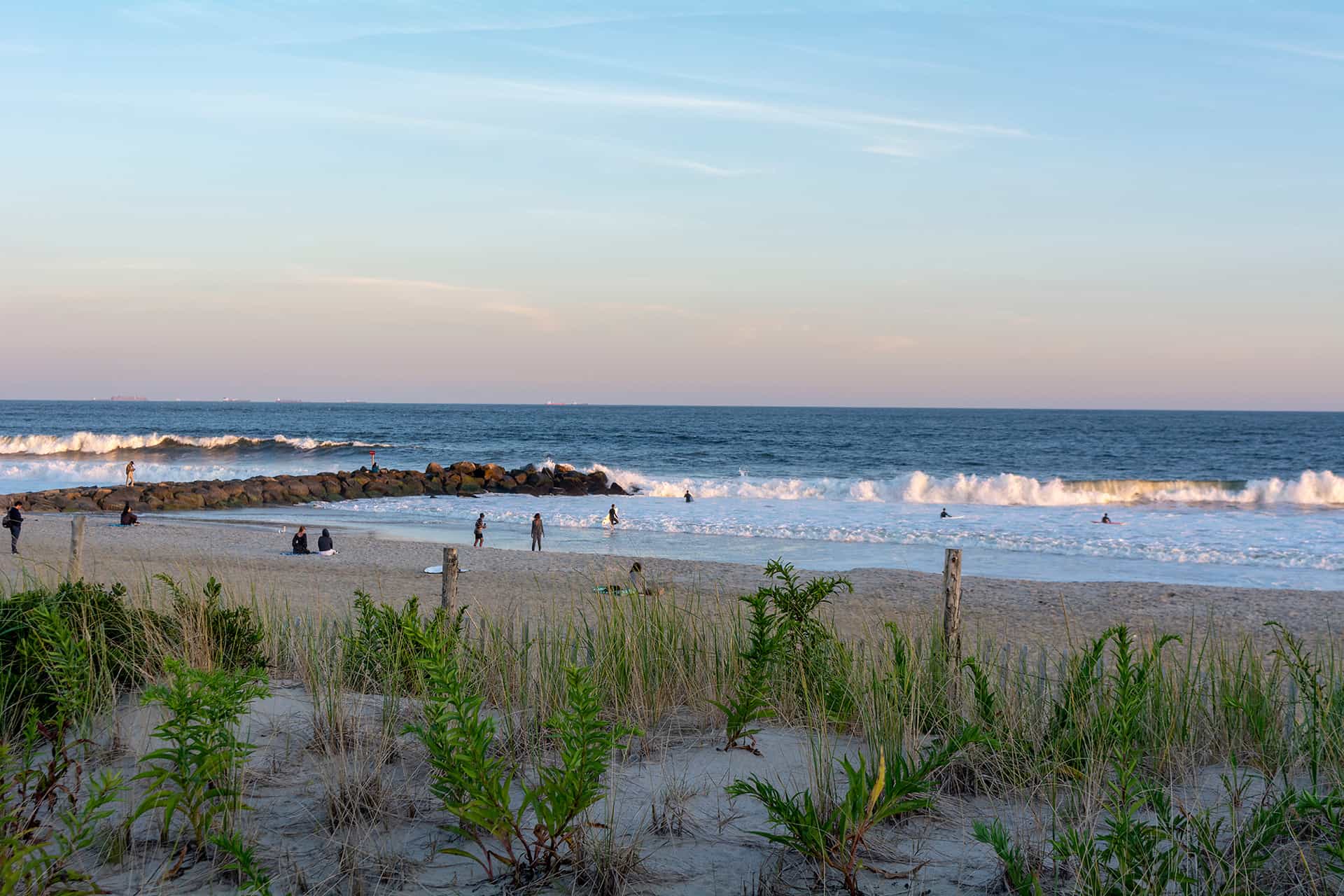 This neighbourhood is located on the long, thin peninsula south of Queens, in the extension of  Long Beach. In the summer, you can have a great time on the beautiful sandy beaches, where many playgrounds for children are installed.

But Rockaway is also an area that can be interesting during the rest of the year, as you will find a lot of shops and a few museums.

Fort Tilden was once a military installation. Today, you can go there to find a quiet beach and a large park with a cinema, athletic tracks and a hiking trail. You'll even have the opportunity to access a large observation deck from which you can enjoy panoramic views of the Manhattan skyline, Jamaica Bay and New York Harbor. 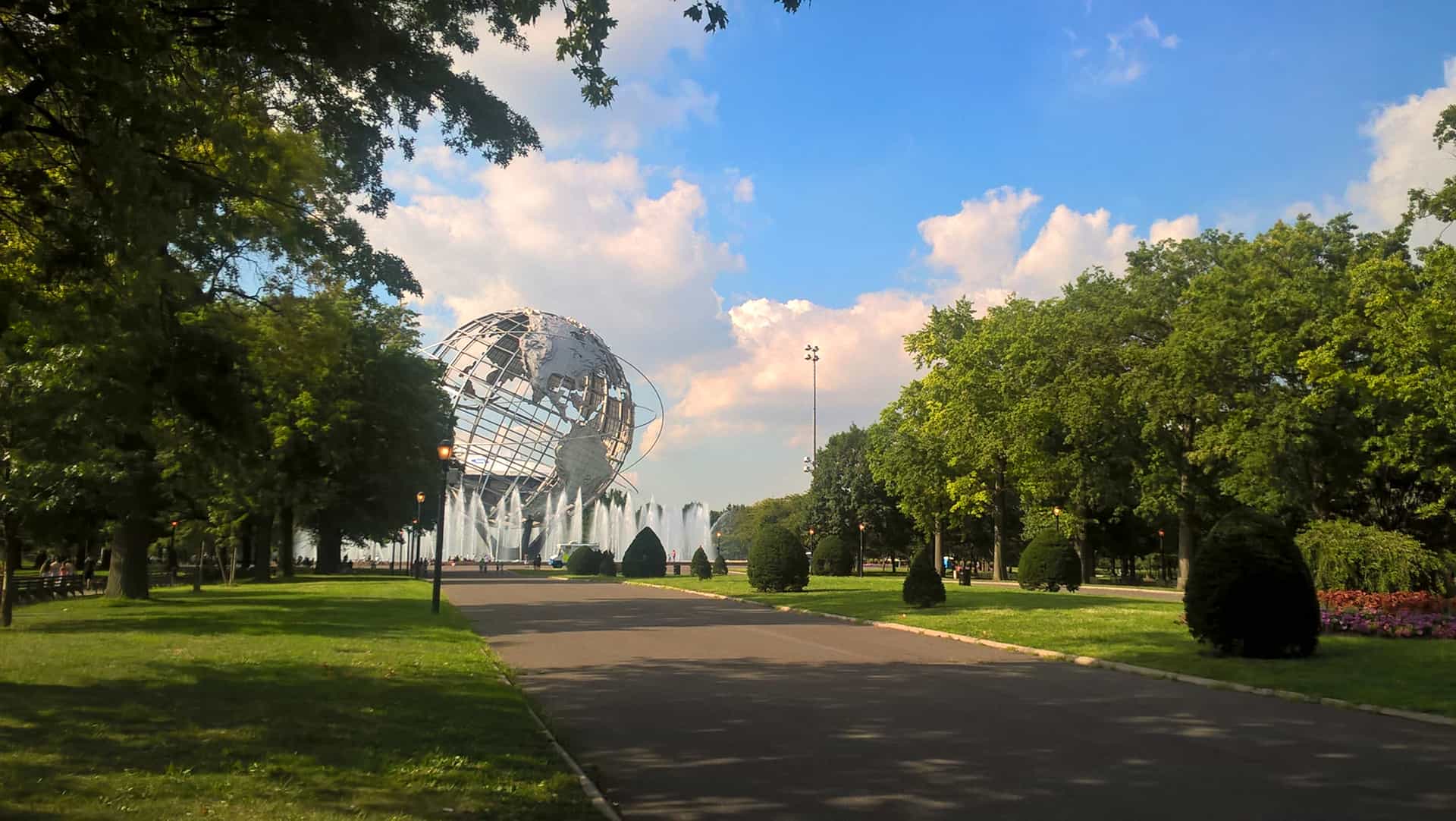 The big attraction in the Flushing neighbourhood is Corona Park – often called Flushing Meadow Park. You've most certainly seen the Unisphere in a movie or magazine. This large metal structure in the shape of a globe measures almost 12 metres in diameter and stands in the middle of the park.

Created for the 1939 World's Fair, it is the fourth largest park in the city. As you stroll through Corona Park’s wide paths, you may even come to forget that you are still in the heart of one of the largest cities in the world. The park is also home to several museums, and it's also where the US Open is held each year.

Additionally, Flushing is home to New York's largest Chinatown, which is actually much larger than Manhattan's Chinatown. On top of being bigger, it's also much less touristy, so it's a great place to go if you want to get a little more of a change of scenery during your stay in Queens.

You can get there by taking the 7 underground to Flushing Main Street, the terminus. 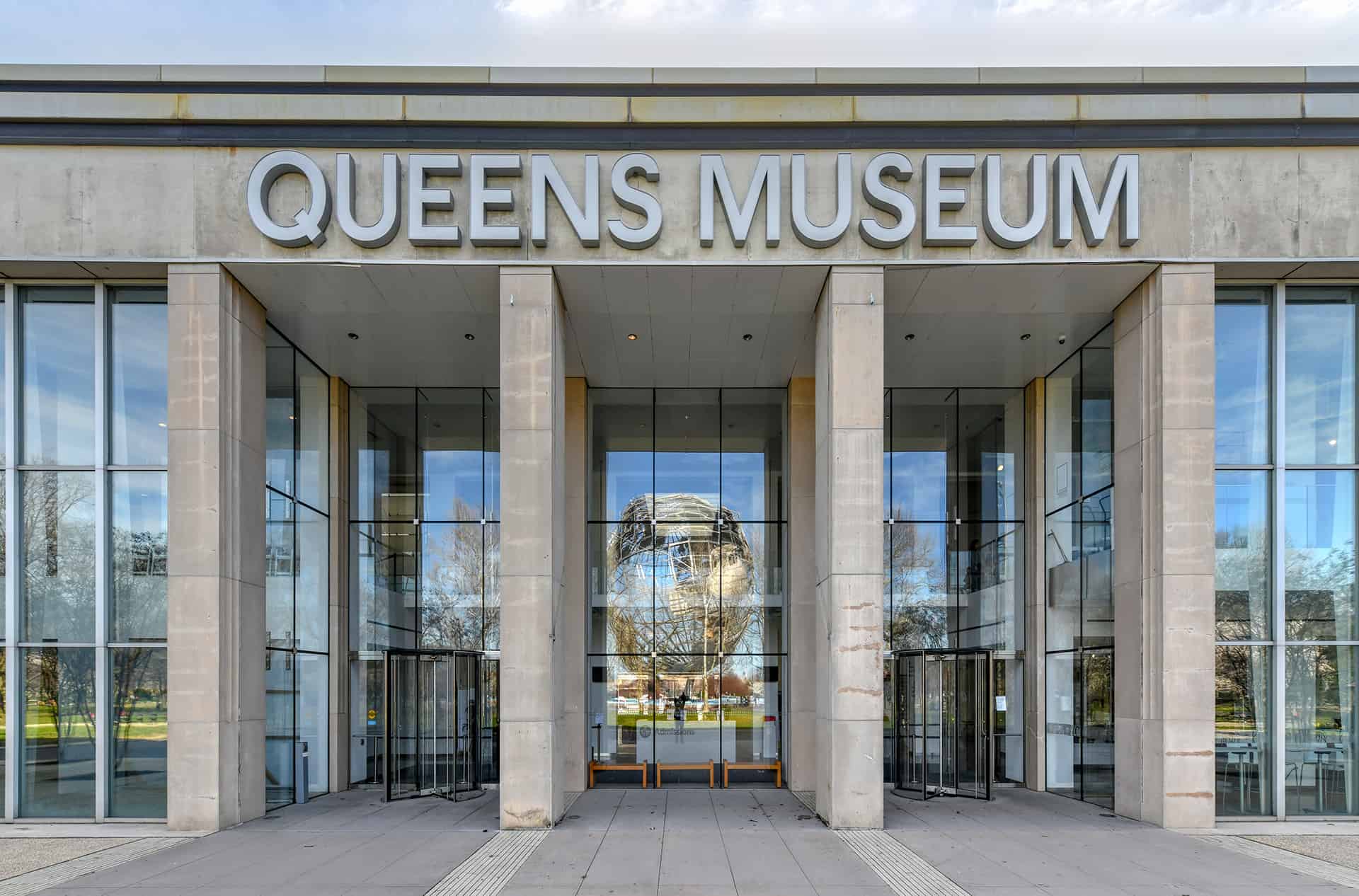 All over New York, you can visit some very famous museums, and Queens is no exception. Some of the most interesting museums in New York are located in the borough:

BOOK YOUR ADMISSION TO THE MOMA BY CLICKING HERE

Some world-famous sporting events also take place in Queens. Of course, part of the New York City Marathon route goes through Queens. After passing through Brooklyn, the runners run along Queens and cross the East River on the Queensboro Bridge, arriving in Manhattan. If you want to watch the New York Marathon, the end of this bridge is a good place to watch and cheer the runners on.

City Field, home of the New York Mets, is also located in Queens, in the Flushing neighbourhood. The Mets are New Yorkers' other favourite team along with the Yankees. You can catch one of their games during the regular season, which runs from April to early November.

Another sporting event held in Queens, at Flushing Meadows, is the US Open. This Grand Slam tournament, which takes place at the end of August and the beginning of September, attracts hundreds of thousands of spectators every year.

You have reached the end of this article on the Queen's borough in New York. I hope you enjoyed it and found it useful 😊.