HOW TO TAKE THE AIRTRAIN IN NEW YORK? ROUTE FROM JFK AIRPORT – MANHATTAN

Before really starting your holidays in New York, the first thing you will need to do is to get to Manhattan from the airport in which you arrived. To do so, you can choose between taking a bus or a taxi or, if you arrive at JFK airport , you can use the Airtrain.

This automatic and extremely economical means of transport will allow you to easily and quickly join the underground, and from there you’ll be able to go anywhere in New York and its districts, such as Manhattan. Find out everything you need to know about the New York Airtrain in this post. 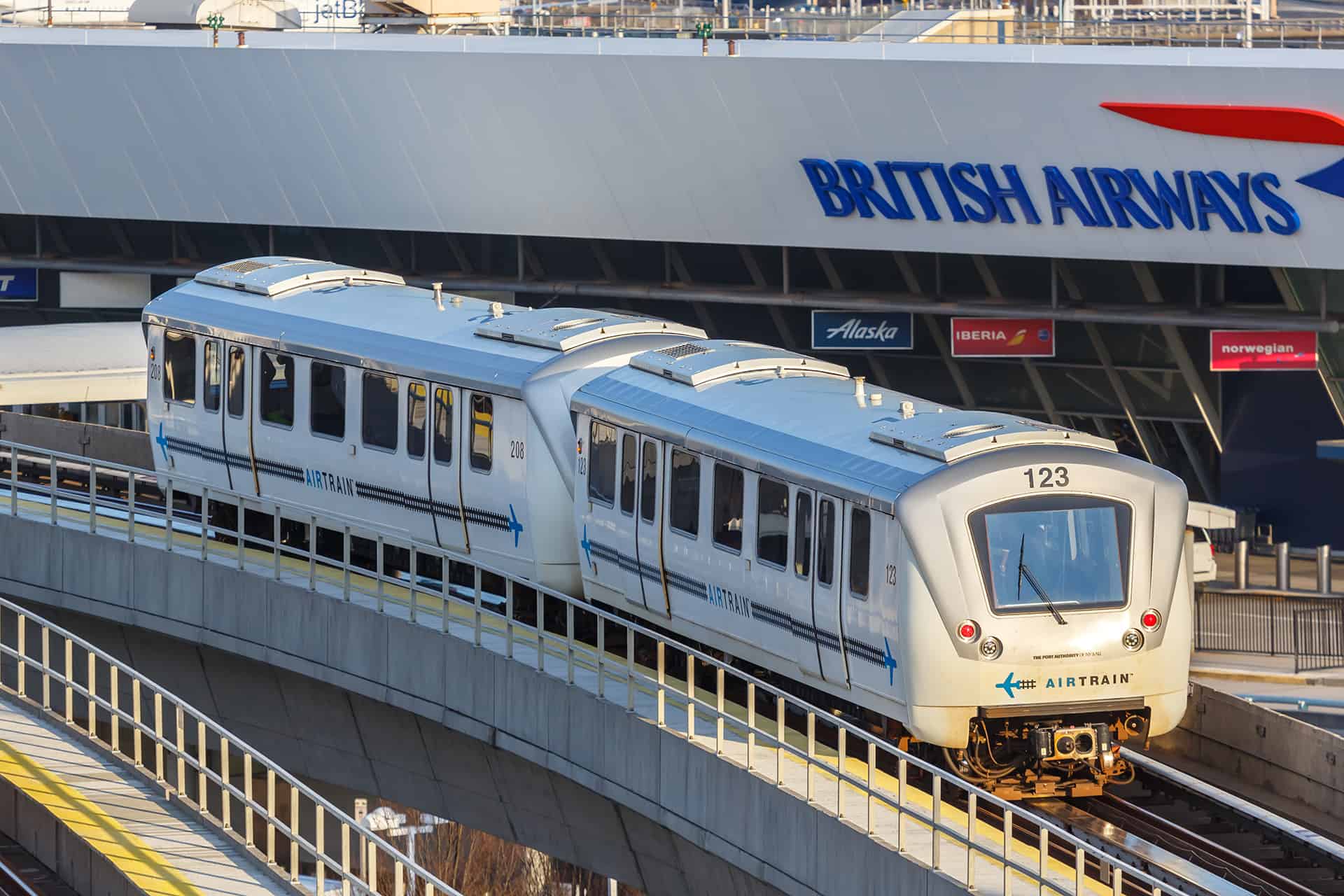 The Airtrain is a fully automated means of transportation, which is directly connected to the New York City MTA network. It will therefore allow you to quickly reach certain New York underground stations as well as some municipal and regional bus stations, but also train stations – to take the Long Island RailRoad commuter trains, in particular.

This automatic shuttle has been running since 2003, on a route that is about 13 km long. The Airtrain runs from JFK airport to the city and back. It is without a doubt one of the best ways to get from JFK to Manhattan!

The New York Airtrain serves a total of 10 stations, including 2 underground stations and 6 stations inside the airport itself:

The Airtrain not only allows you to leave the airport for the underground or other public transport stations, it also serves all of the airport's terminals and car parks – which can be very convenient, given that JFK is one of the 10 largest airports in the world.

NEW YORK AIRTRAIN: A CONVENIENT AND INEXPENSIVE WAY TO TRAVEL 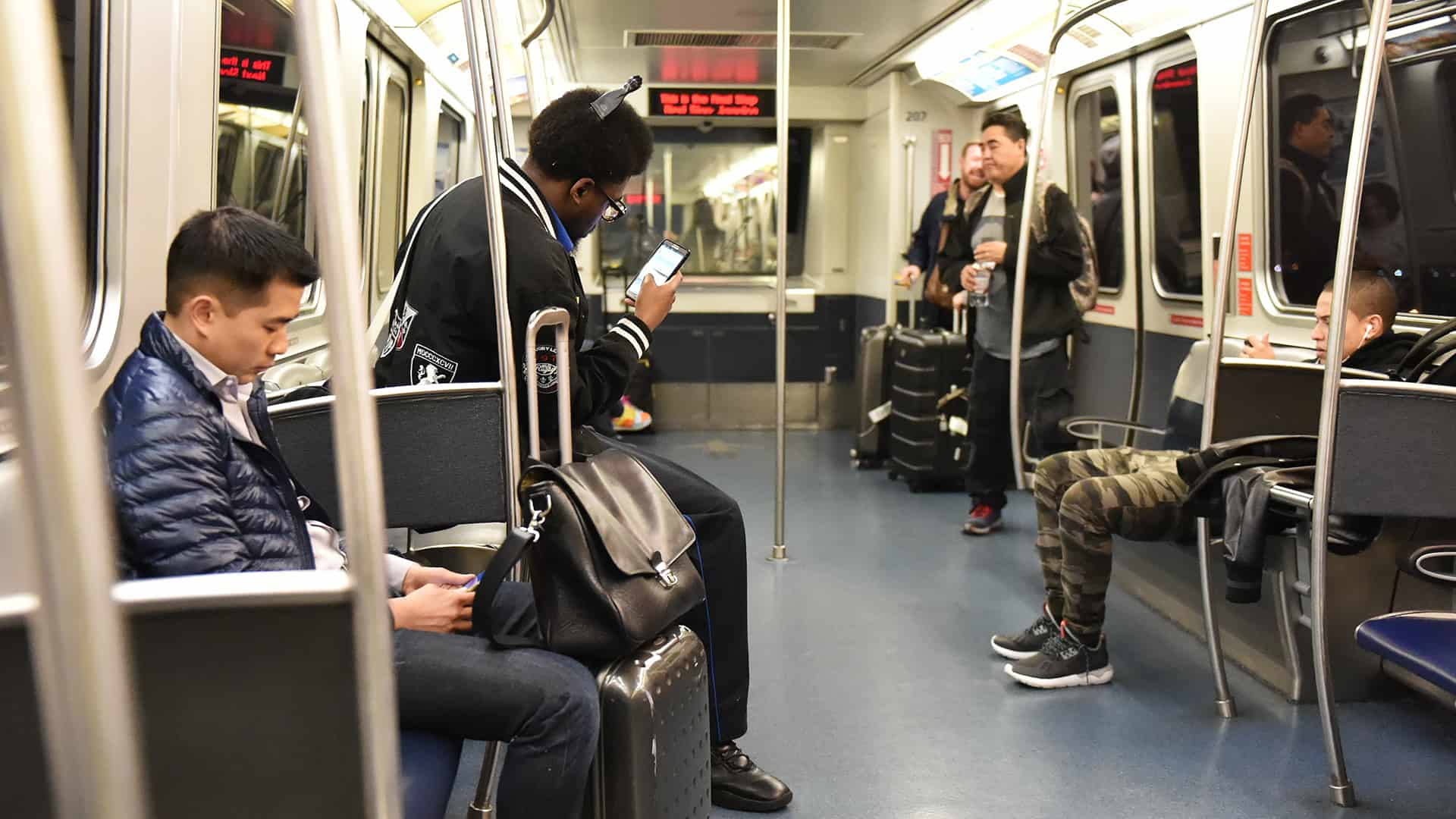 From JFK airport, you can take the free Airtrain to any terminal in a matter of minutes. This is by far the most convenient way to get around the airport, especially if you are carrying a lot of luggage.

You will need a ticket only if you get off the Airtrain at Howard Beach Station or Jamaica Station. This ticket will cost you $7.75 (£5.90). You will also need a reloadable MetroCard, which will cost you $1 (£0.80) on your first trip. The underground ticket to central New York will then cost you $3 (£2.30). From Jamaica Station or Howard Beach Station, it will take you just over an hour to reach the heart of Manhattan.

While this is not the most comfortable option, it is one of the most convenient and, above all, the cheapest option, as the Airtrain and underground will get you to all the stations in Manhattan for about ten dollars. In comparison, it will be 5 times more expensive if you choose to take a taxi, or one and a half times more expensive for shared shuttles.

To buy your JFK AirTrain ticket , you can use the kiosks present at many locations in the stations and at the airport. However, these kiosks are often overcrowded, so if you wish to avoid having to queue, I would advise you to go ahead and buy your ticket online, before you leave for New York.

THE BEST DEAL FOR TAKING THE AIRTRAIN IN NEWYORK

Regardless of your destination, the Airtrain ticket will cost $7.75 (£5.90) per person, and you will need to purchase two tickets to make a round trip. The Unlimited MetroCard , which will allow you to ride the underground at will, cannot be used to ride the Airtrain. The classic MetroCard, known as 'Pay-per-Ride', can be used for Airtrain travel, but you will be charged the usual fare for this journey.

If you are travelling with other people, an interesting solution may be to buy the package that offers 10 Airtrain trips for $25 (£19. With this package, you can take the Airtrain 10 times over a 30-day period.

Not many people fly to JFK that often, but this option becomes interesting for groups, because you can use it simultaneously to travel with more than one person. A maximum of 4 people can travel on the same trip with this option. If you are travelling with 4 people, you can use this option to get to and from JFK airport and the underground stations. You'll only have used 8 of the 10 trips, but it will have cost you just over $3 (£2.30) per person per trip – an unbeatable rate! In fact, this package can save you a few bucks even if you're travelling in pairs.

GETTING TO DOWNTOWN NEW YORK BY AIRTRAIN 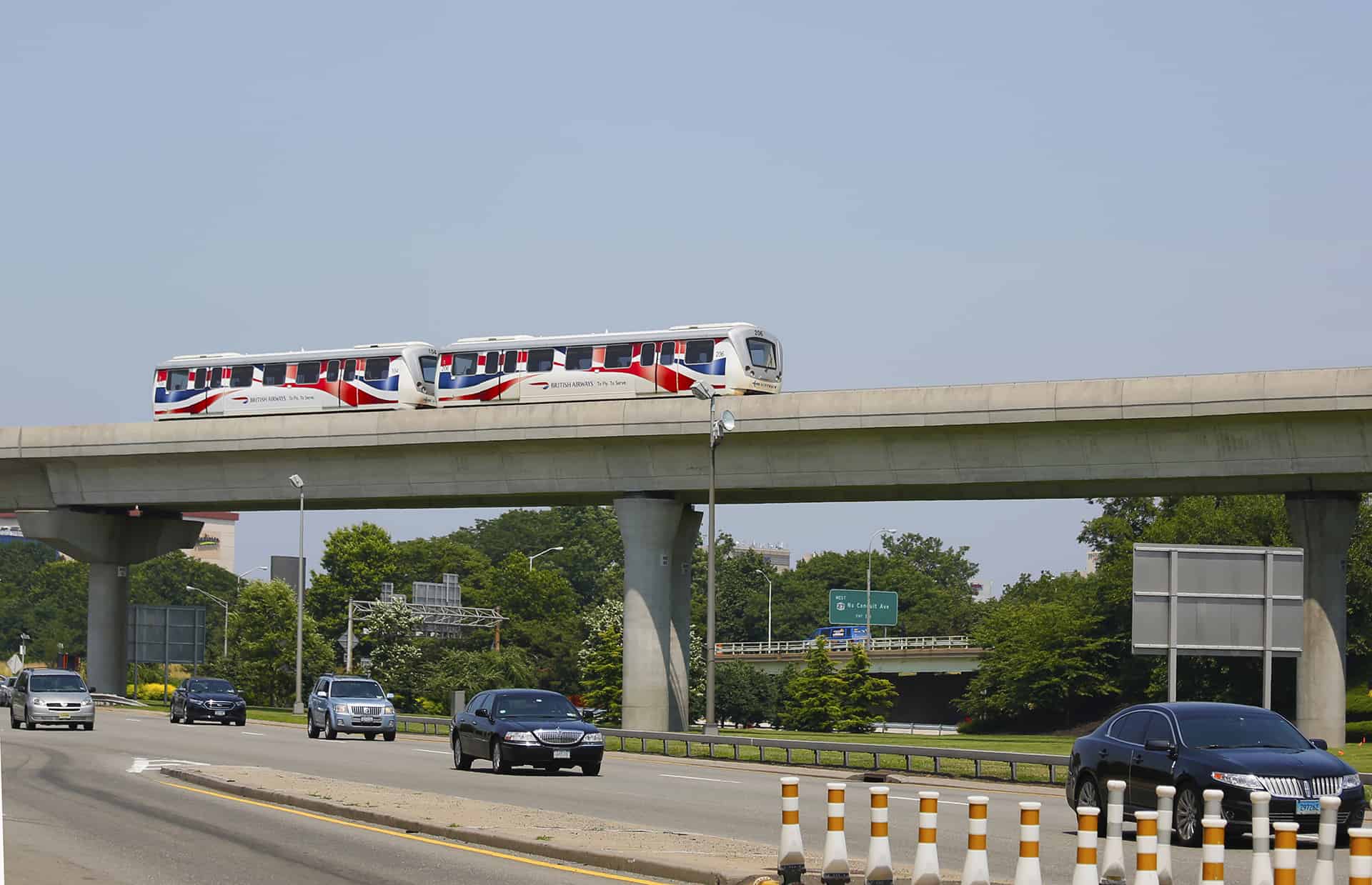 Once you've arrived at JFK airport, cleared all the checkpoints and collected your luggage, simply follow the many signs to find the nearest Airtrain station.

No matter which terminal you arrive at, you won't have to go far to reach one of these stations. You will have to go through the gates as if you were entering a normal metro station, and you can also buy your ticket there if you have not already done so. Then all you have to do is wait for the Airtrain to arrive. Trains run every 5 minutes during peak times and every 10 minutes during slower periods. They runtous les jours de l’année 24/7 all year.

The Airtrain runs on 3 different routes. One runs only around the airport, passing through all the terminals, while the other two also run around the airport, but then join Federal Circle, each going in one direction. The Red Line goes to Jamaica Station and the Green Line Verte to Howard Beach.
Both lines will take you into Manhattan. Generally, the Howard Beach line is a little less busy and the subsequent underground ride is more pleasant, as it is mostly overhead railway. On the other hand, from Jamaica Station you can get to many destinations more easily.

GETTING TO JFK AIRPORT FROM DOWNTOWN NEW YORK

For your return journey, the first thing you'll need to do is make sure your MetroCard is fully charged. Then you can take the A, E, J or Z underground lines to Jamaica Station or Howard Beach Station, and from there take the Airtrain to the airport. You will need to validate your ticket before boarding the AirTrain, and once you are at the airport, your ticket will no longer be needed, even if you have to take the AirTrain back to change terminals.

Whichever Airtrain line you will travel on, your train will always pass through each of the airport’s Terminals, so you won't need to switch Airtrains to reach your destination once in the airport.

At each stop, an audible announcement will tell you which terminal you are at, and what the next stop is.

NAVIGATING BETWEEN TERMINALS WITH THE AIRTRAIN 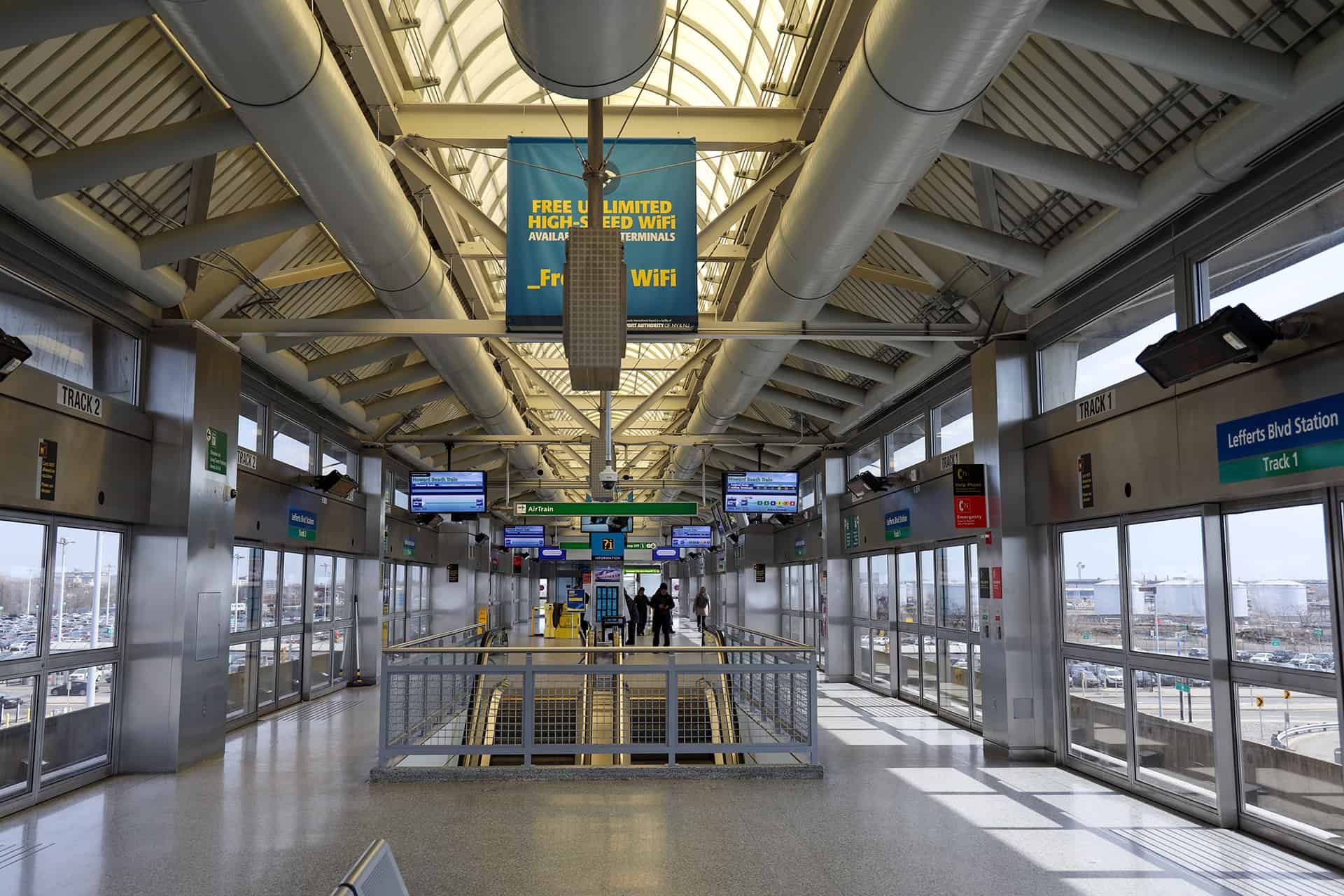 In some cases, for example if you want to rent a car at the airport, you will simply need to take the Airtrain to go from one terminal to another, or to Federal Circle station. In this case, you don't need to pay a fare.

The Yellow Line only loops through each terminal. This line will be the most convenient to use if you do not wish to leave JFK. The other lines both pass through Federal Circle station – which is your destination if you want to rent a car or take a shuttle to your hotel.

MY OPINION ON THE NEW YORK AIRTRAIN

The Airtrain is a fast and free way to travel between the terminals at JFK airport.

It is the best choice if you're looking for an economical solution. In any case, with it you can travel for a better price than you would with other means of transport – even if you are travelling with several people, as the 10-trip package can be shared between 4 passengers. Moreover, the Airtrain is easy to use, though the underground trips may become more complicated.

However, the Airtrain is not the best in terms of practicality. The journeys to reach the heart of Manhattan are quite long, and you will have to make at least one change to take the underground. This can make the journey unpractical, especially after a long day of travel and carrying luggage. Still, if you arrive during off-peak hours and your luggage is not too bulky, the Airtrain will still be a great way to get to the city centre.

What to do in New York ?