ALL ABOUT CARNEGIE HALL IN NEW YORK

Carnegie Hall is a Manhattan concert hall that opened in 1891, and is now one of the most famous performance venues in New York. Known for its incredible acoustics, this hall has hosted some of the biggest names in the music industry. Want to discover this iconic building during your stay in New York? Then follow the guide 😊 !

The history of Carnegie Hall 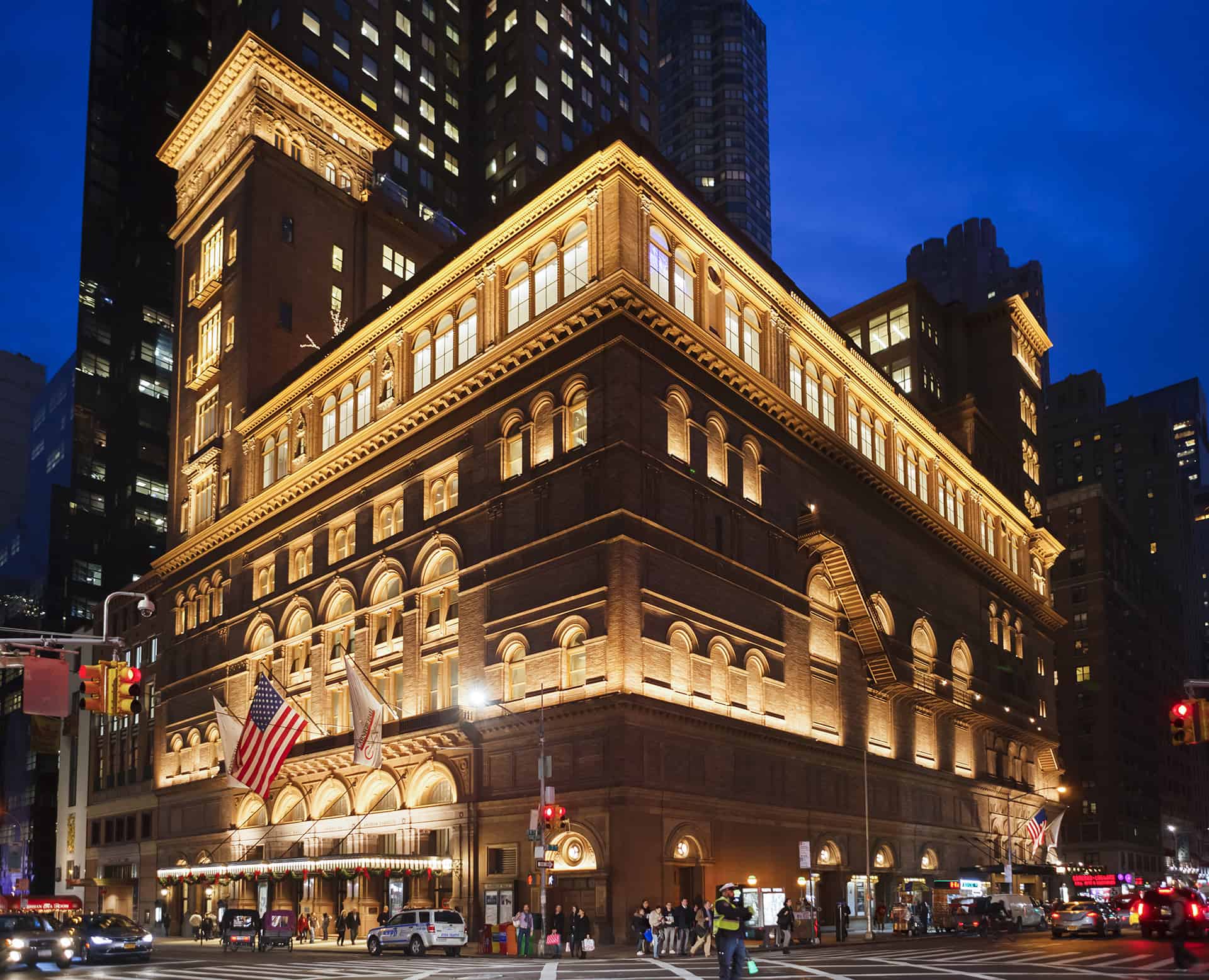 Carnegie Hall is named after Andrew Carnegie, the Scottish industrialist and philanthropist who financed the building’s construction. The construction of this concert hall began in 1890 and its inauguration took place the following year, in May 1891. The famous Russian composer Pyotr Ilyich Tchaikovsky gave the inaugural concert of this hall, which was to become legendary.

Very quickly, Carnegie became a mecca for classical music in New York. It was the home of the New York Philharmonic, the oldest philharmonic orchestra in the United States, before it moved to Lincoln Centre in 1960. At that time, the destruction of Carnegie Hall was considered, but thanks in part to the influence of American violinist Isaac Stern, the City of New York finally decided to buy Carnegie Hall, which became a historic monument a few years later in 1964.

Between the mid-1980s and mid-1990s, the building was completely renovated. Since then, prestigious concerts have been held at Carnegie Hall on a regular basis, and people from all over the world have come to see performances by the greatest musicians.

Since its creation and Tchaikovsky's very first concert, Carnegie Hall has seen such great names as Maria Callas, Sergei Rachmaninoff, Maurice Ravel, Vladimir Horowitz, Luciano Pavarotti and many others. Although the hall is best known for its classical music concerts, other great artists have also performed here, such as Edith Piaf, Miles Davis, Charles Aznavour, Duke Ellington, Bob Dylan, the Beatles, Jay Z and Pink Floyd

If you buy the New York CityPass, the entrance to visit Carnegie Hall will be free, for it is included in the lists of the 100 attractions you can enjoy with this pass. If you really want to visit this place or if, during your stay, you pass by this monument and want to take a quick tour, you will have access and won't need to take out your wallet! 🙂

MORE DETAILS ON THE PASS & THE ATTRACTIONS INCLUDED BY CLICKING HERE

Tickets to attend a concert

During your trip to New York, there are two ways to discover Carnegie Hall. The first one is simply to visit it, I will tell you more about it below. The second one is obviously to take the opportunity to attend a concert at Carnegie Hall.

Very regularly, concerts are organised in the main auditorium, and going to see a performance of one of the greatest artists in the world at Carnegie Hall will be the best way to understand why the acoustics of this place are so exceptional. All seats have good visibility.

You can find a list of upcoming concerts in Carnegie Hall's Isaac Stern Auditorium on this page. 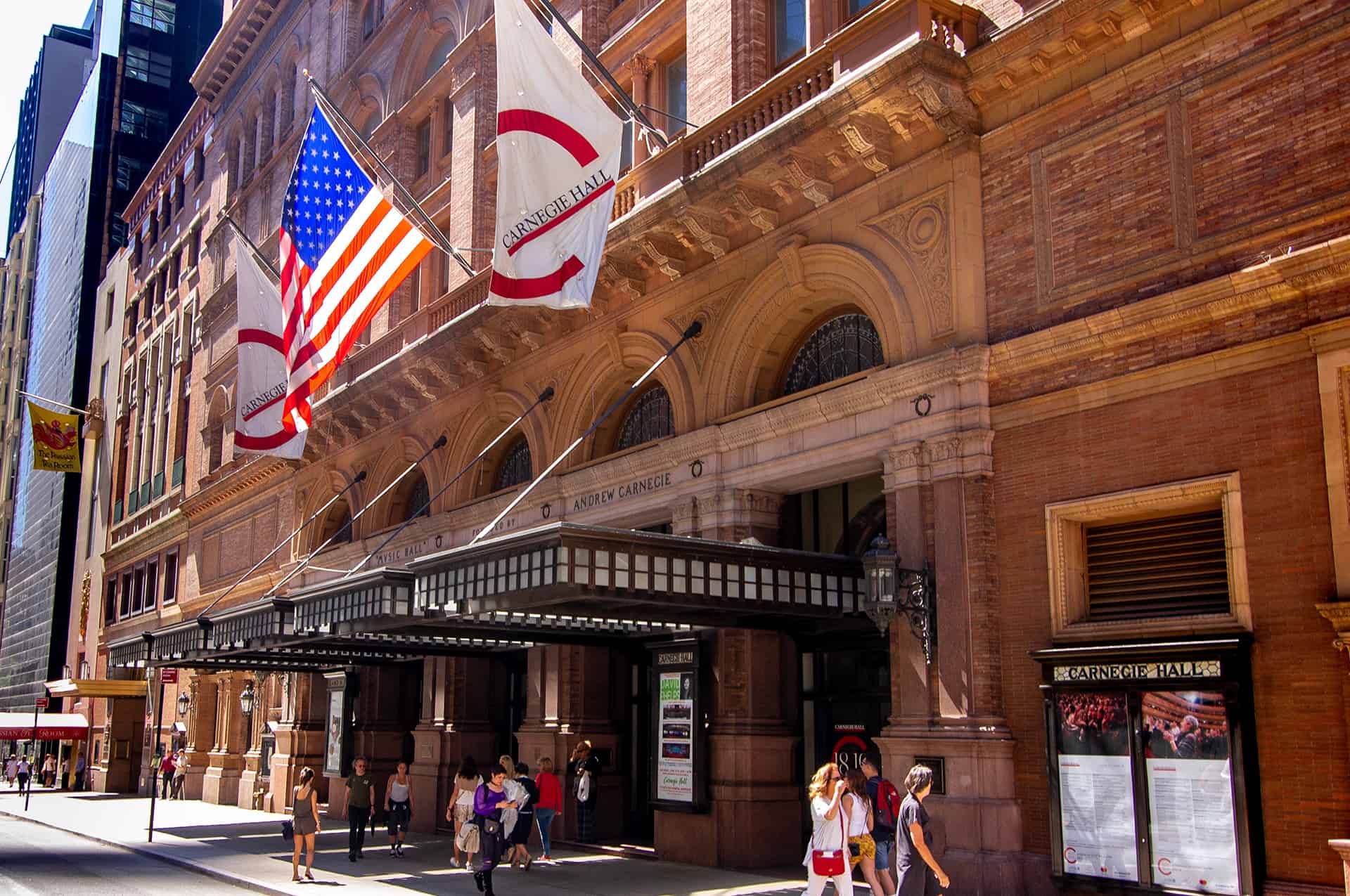 Even if you don't have the opportunity to see a concert, a visit to this incredible venue with its unique architecture and history could be one of the highlights of your stay in New York. During your visit to Carnegie Hall, you can discover the 3 auditoriums that make up the hall:

In addition to these auditoriums, you will have the opportunity to visit the Rose Museum, which is located upstairs. This museum, which opened in 1991 during the restoration of the building, houses the Carnegie Hall archives and exhibits a large number of objects that tell the story of this legendary concert hall: photographs, concert programs, original posters, videos, live recordings...

On concert days, this museum opens half an hour before the start of the show. Even if you come to Carnegie Hall to enjoy a show, I really recommend that you take some time to discover the rich history of this temple of music in New York.

You can buy your ticket for the tour on site, but this tour is also included in the New York Pass. This City Pass, valid from 1 to 10 days, will allow you to visit about 100 different attractions in New York, including the Top of the Rock, the MoMa, the MET, the Empire State Building and of course Carnegie Hall.

MORE INFORMATION ON THE NEW YORK CITYPASS BY CLICKING HERE

How to get there ?

Carnegie Hall is located in Manhattan's Midtowndistrict, at the intersection of 7th Avenue and 57th Street.

With the New York Pass, you can also take advantage of the multi-stop Big Bus, a sightseeing bus that passes by more than 40 New York City landmarks, many of which are located in Midtown near Carnegie Hall.