Dreaming of seeing a Broadway musical while in New York City? I explain everything you need to know about Broadway shows in this article 😊

Seeing a Broadway show is for me a must-do activity of any trip to New York.

It's a mythical place – and definitely the best place in the world to see a musical!

In this little guide, I'll show you some of the best Broadway musicals, and give you the different options you'll have to buy your ticket and see a memorable show. Are you ready? Let's go! 😉

Book your ticket to see a Broadway Show

If you want to see a Broadway musical while in New York, it is often best to book your ticket in advance. If you're going to see one of the big shows that draw large crowds, like Chicago or Aladdin, reserving your seat is mandatory.

Even if you book early (weeks or months in advance) you may not be able to get a discount on these shows, so there is no economical advantage. However, if you wait too long, you may realise that there are no seats left to buy for the date of your choice.

SEE THE PROGRAM OF SHOWS DURING YOUR STAY BY CLICKING HERE

Some websites can be very interesting if you know the dates of your stay and want to secure your seat for a Broadway show.

Through them, you will be able to find current promotions, a show calendar, and even receive alerts if a promotion appears.

Of course, on Broadway you will also be able to see shows that have less notoriety. Whether you have a show in mind or just want to experience a Broadway show, there are several ways to find a ticket. 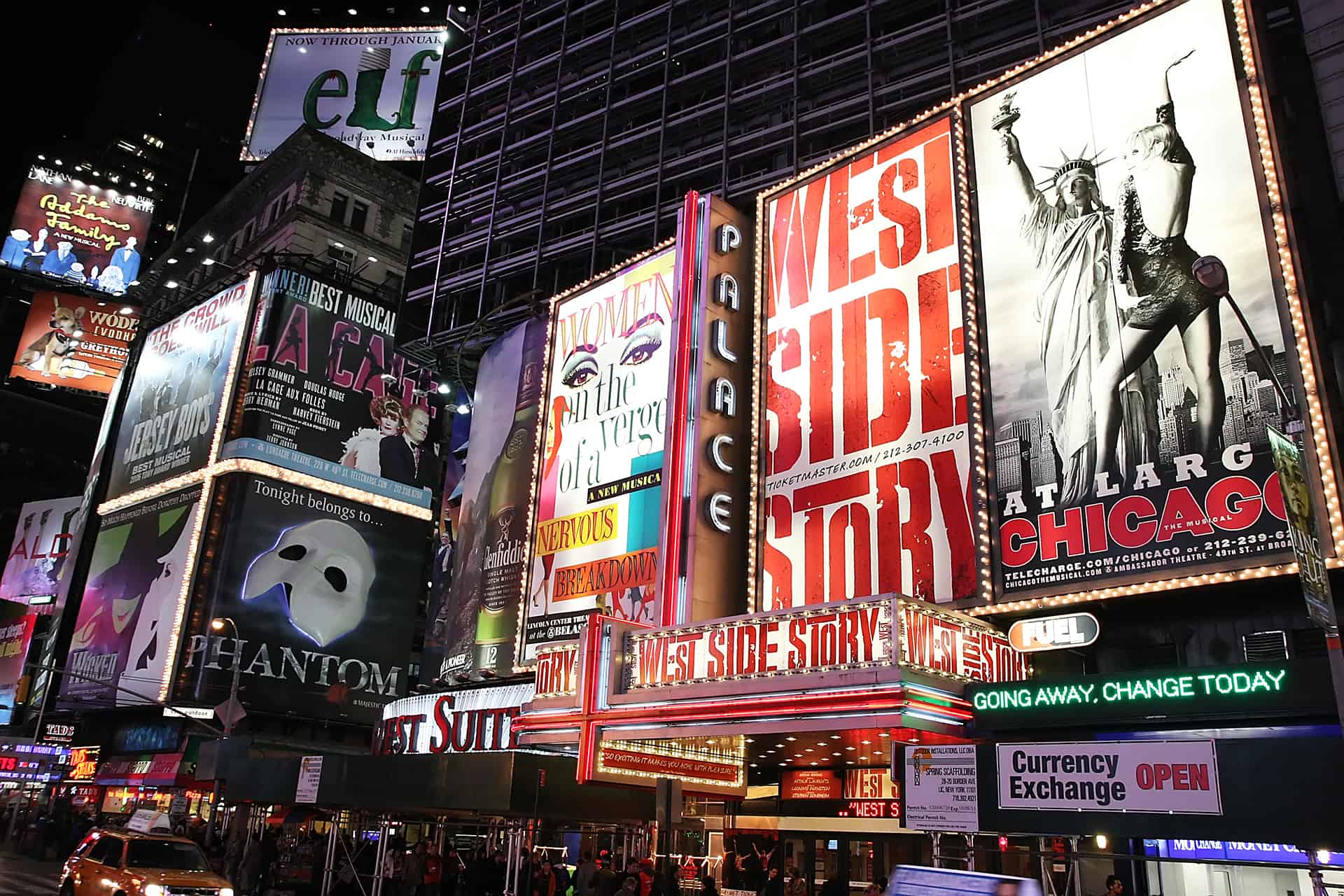 Rush tickets and Standing Room Only

Rush Ticket are the way to go if you don't mind waiting for hours. On Broadway, if you want to see some of the biggest shows, you can go to the front of the theatre or venue at least an hour and a half before the box office opens and get tickets for much less than the regular price.

You can buy tickets for $30 (£23) or $40 (£30), while average prices are usually around $110 (£85) – and even more expensive for the best seats. However, you can only buy a maximum of 2 tickets, for the same day's session, and you will not be able to choose your location. The total number of tickets available is not announced, and it is first come, first served!

Standing Room Only  is another practice implemented in some theatres. If you really want to see a show and it is sold out, you may still have a last chance to see the performance. On the day of the show, a very small number of seats are available, and these are often offered by the "Cancelation Line". These seats will allow you to attend the show standing up, usually at the back of the theatre, or on the sides, for about $25 (£19).
I recommend checking the theatres' websites, or even going directly to the box office the day before, to see if Rush-Tickets or Standing Room Only will be available.

These ticket lotteries were initiated by the show producers to allow everyone to try their luck and attend some of the biggest Broadway shows at an extremely discounted rate.

Lotteries can be organised directly on site, in the hours before the show or a few days before, but nowadays, they are more and more often organised online.

The operation of these lotteries is simple: you will only have to register to participate in the draw. If you are selected, you will have the opportunity to get very good seats, often in the first rows, to attend the show you have chosen at a price that defies all competition. Depending on the musical, tickets available through these lotteries range from $30 (£23) to $50 (£38), while their original prices often exceed $200 (£153). 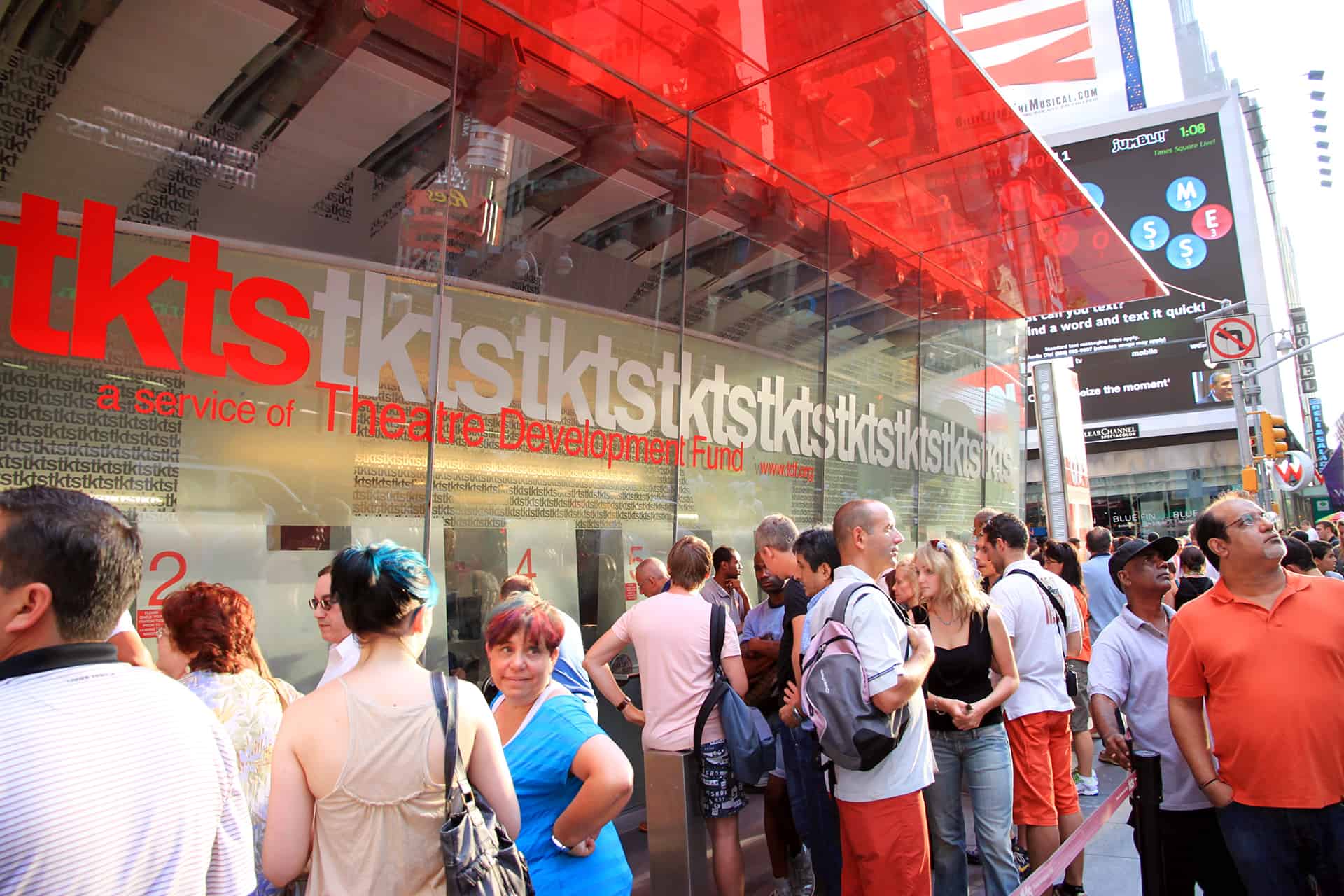 If you didn't plan to go to a show at all, and you feel like going at the last minute, I suggest you try your luck at the TKTS kiosks. You can find them in many places like Times Square or Lincoln Centre, and they will allow you to buy tickets for the shows that will take place the same night or the next day.

You won't find tickets to every Broadway show at these kiosks, but the selection is often quite large, and you'll have the opportunity to take advantage of discounts ranging from 15 % to 50 %. Sometimes there are also special rates for students or people under 26. 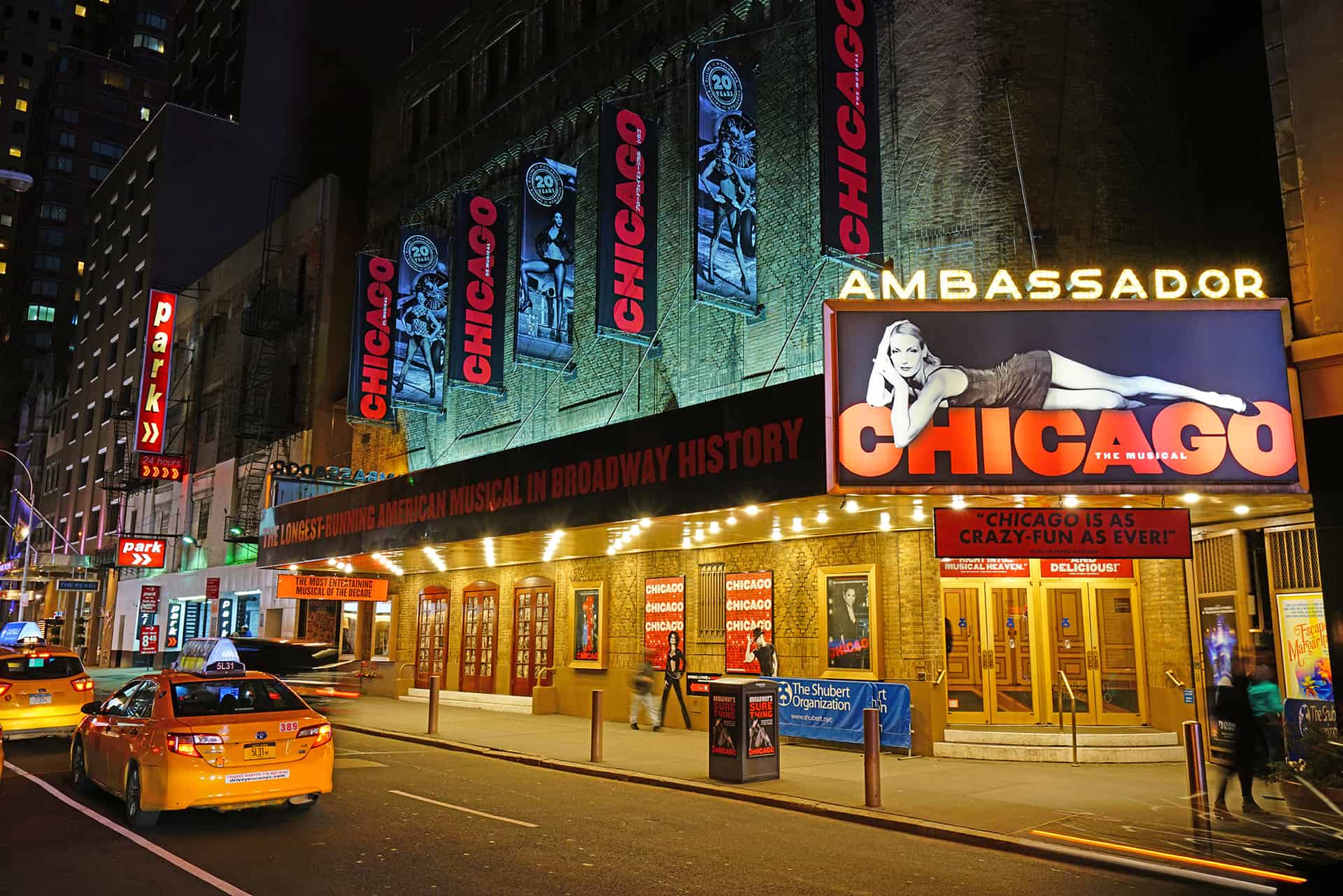 This mythical musical, based on a play from the 1920s, was already a great success on Broadway in the second half of the 1970s. In 1996, it made a comeback in a modernised version, and won numerous awards. Today it is one of the longest running Broadway shows.

This show plunges the spectator into Chicago in 1924, to follow the story of Roxie Hart, who after killing her lover finds herself in prison and meets Velma Kelly, a star of the entertainment world. The two protagonists aim to regain their freedom and become famous. 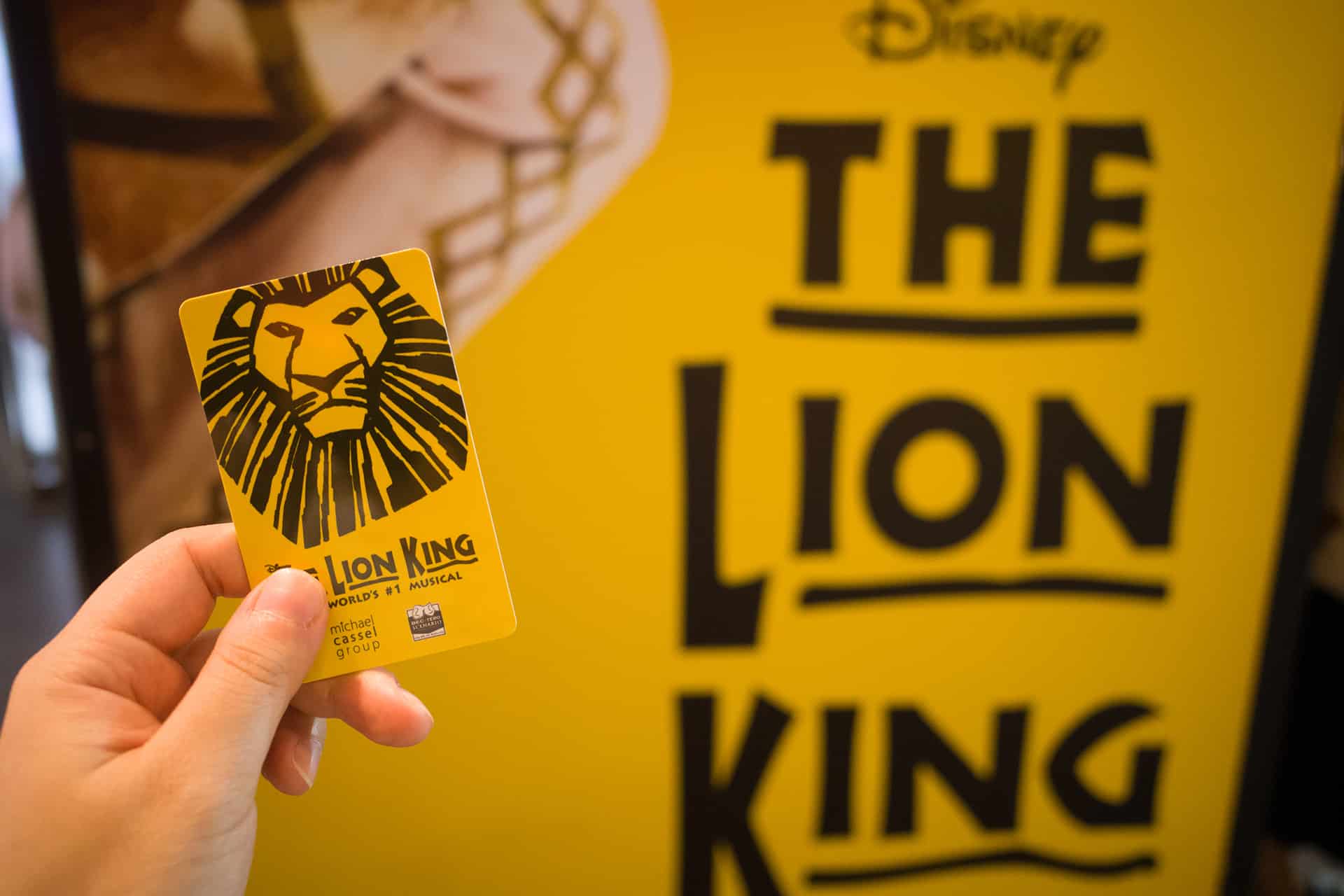 Today, The Lion King is probably the most famous musical on Broadway. I can only advise you to book very early if you want to attend this show which sells out every day. Produced by Disney, this show tells the story of the young lion Simba, who after the death of his father will have to live many adventures to reach the throne and become the king of the Pride Lands.

In this show, the singers, actors and dancers are all dressed as animals. The star of the song Elton John, who could already be heard singing in the cartoon, is one of the two co-writers of the songs of this musical. This show has been playing since 1997 at the Minskoff Theatre, the performance lasts 2 hours and 30 minutes, and the ticket prices are between $100 (£76) and $170 (£130) approximately.

The Phantom of the Opera

The Phantom of the Opera is the longest-running show on Broadway. It has been performed since 1988 at the Majestic Theatre, one of New York's most beautiful theatres. This musical is an adaptation of the famous French novel of the same name, written by Gaston Leroux and first published in 1910.

Set in Paris at the Palais Garnier, it tells the tragic story of the talented actress Christine Daaé and the two men who fall in love with her, the aristocrat Raoul de Chagny and the mysterious Phantom of the Opera, a masked man living in the basement of the palace. This musical lasts about 2 1/2 hours, and tickets range from $45 (£34) to $150 (£115). 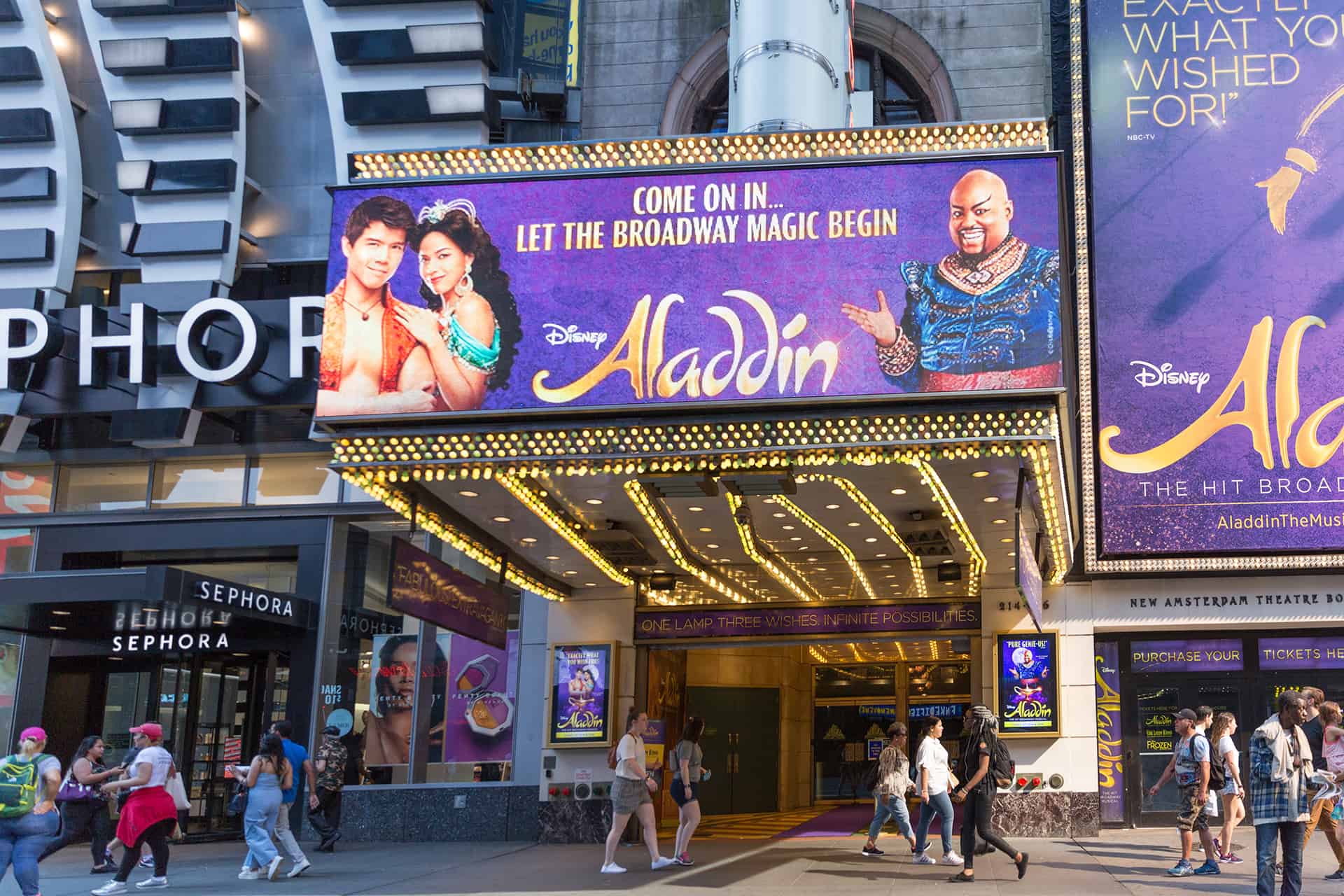 Here is another musical inspired by a great Walt Disney classic: the story of Aladdin. The Hit Broadway Musical allows itself to take a little more freedom than the animated film. You'll get to experience the story of Aladdin, Jasmine and the terrible Jafar in a whole new light, and hear all the cult songs from the cartoon, as well as many others that were written especially for this show.

Performances of the Aladdin Broadway musical last 2 hours, they take place at the New Amsterdam Theater and tickets cost between $60 (£45) and $160 (£122).

This is probably the most mythical musical of all. It was played at the Winter Garden Theatre on Broadway for the first time in 1957, and was also a huge success when it was adapted for the cinema in 1961.

The story is largely based on Romeo and Juliet. Tony and Maria, two teenagers madly in love with each other, are caught up in the conflict between the two rival gangs they belong to, the Jets and the Sharks.

In 2020, this iconic show returns to Broadway in a bold, modern adaptation with a completely new direction and choreography. You can see this musical at the Broadway Theatre, it lasts about 1 hour and 45 minutes and tickets range from $39 (£30) to $199 (£152).

Ain't Too Proud — The Life And Times Of The Temptations

This musical, which has been playing on Broadway since February 2019, is one of the biggest hits of recent years. The story focuses on the rise to success of the Temptations, a famous Rhythm & Blues and Soul band, founded in the early 1960s in Detroit.

To the rhythm of their greatest hits such as My Girl, Papa was a Rolling Stone and Just My Imagination, you'll get an in-depth look at their story, from how they met to their greatest triumphs and all the difficulties they had to go through. This show is about 2 1/2 hours long, and ticket prices range from $50 (£38) to $170 (£130).