Do you dream of spending a New Year's Eve in New York? Well, I'll tell you everything you can do in this city on December 31 right now 🙂

If you are lucky enough to be in New York for the New Year's Eve celebrations, you will be able to discover the city’s very special atmosphere during this period. There is no shortage of places to celebrate New Year's Eve in New York, and you can choose from a wide variety of places offering different atmospheres to spend an unforgettable evening. 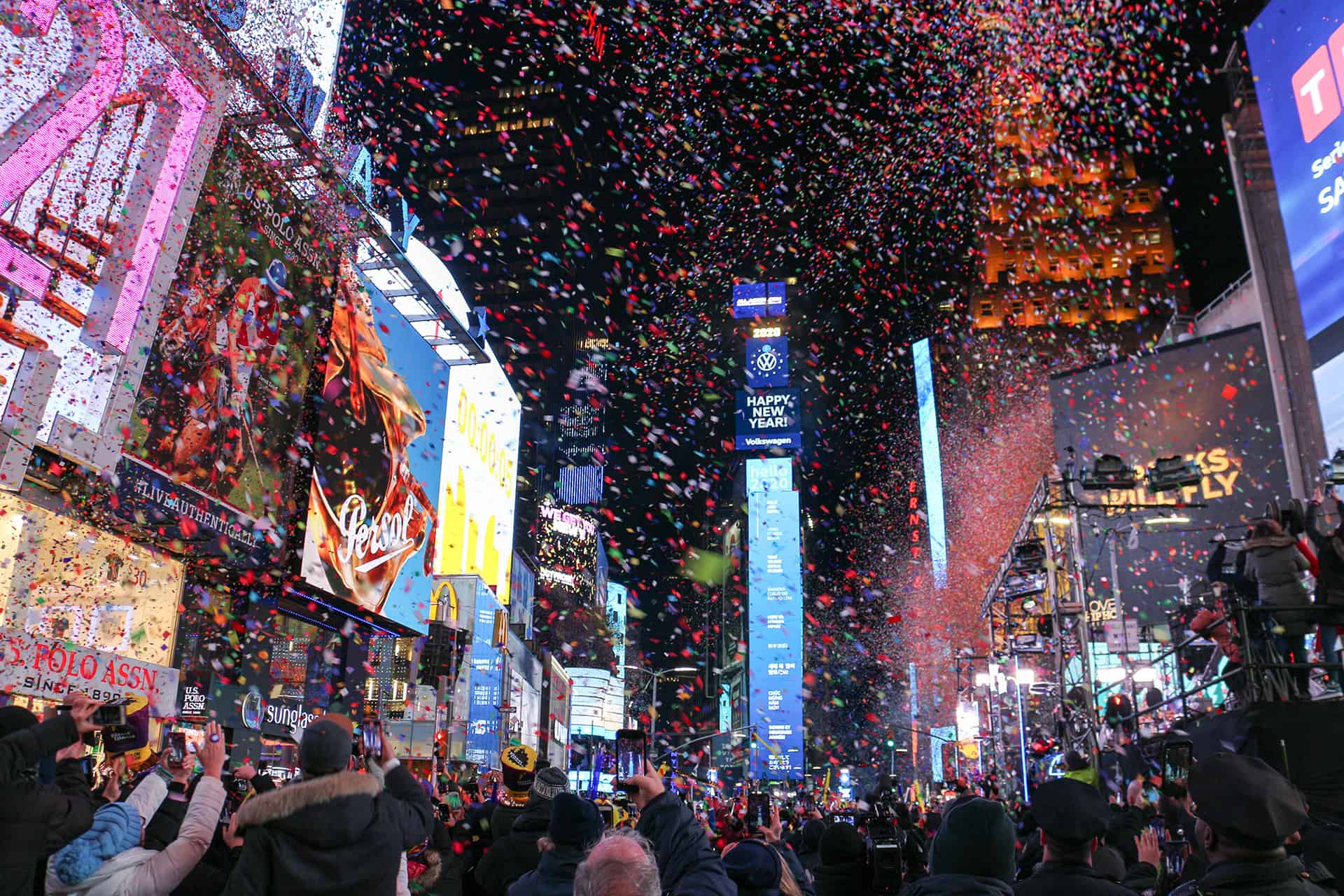 Times Square is undoubtedly the most popular place to spend the evening of December 31 in New York. Every year, hundreds of thousands of people choose to celebrate the New Year together in this iconic location. However, while I understand that the desire to be able to live this emblematic experience is strong, the effort required to fully enjoy the show seems to me a little too great.

The event that everyone looks forward to is the Times Square Ball – a huge ball that starts rolling from the One Times Square Building shortly before midnight. If you want to experience this moment in person, you'll have to be very determined. Indeed, to do so, you'll have to arrive long hours before the start of the ceremony (early afternoon or even earlier) and be prepared to stand for long hours in a crowd, all to watch a show that will last only a few seconds.

If you want to watch the show from a much more comfortable location and are willing to spend more than $250 per person (£190), you can buy tickets to the Times Square Ball Drop Party.

This will get you into a luxury suite with a bar and buffet, where you can sit back and wait for midnight in a festive atmosphere, and enjoy a night you’ll never forget. 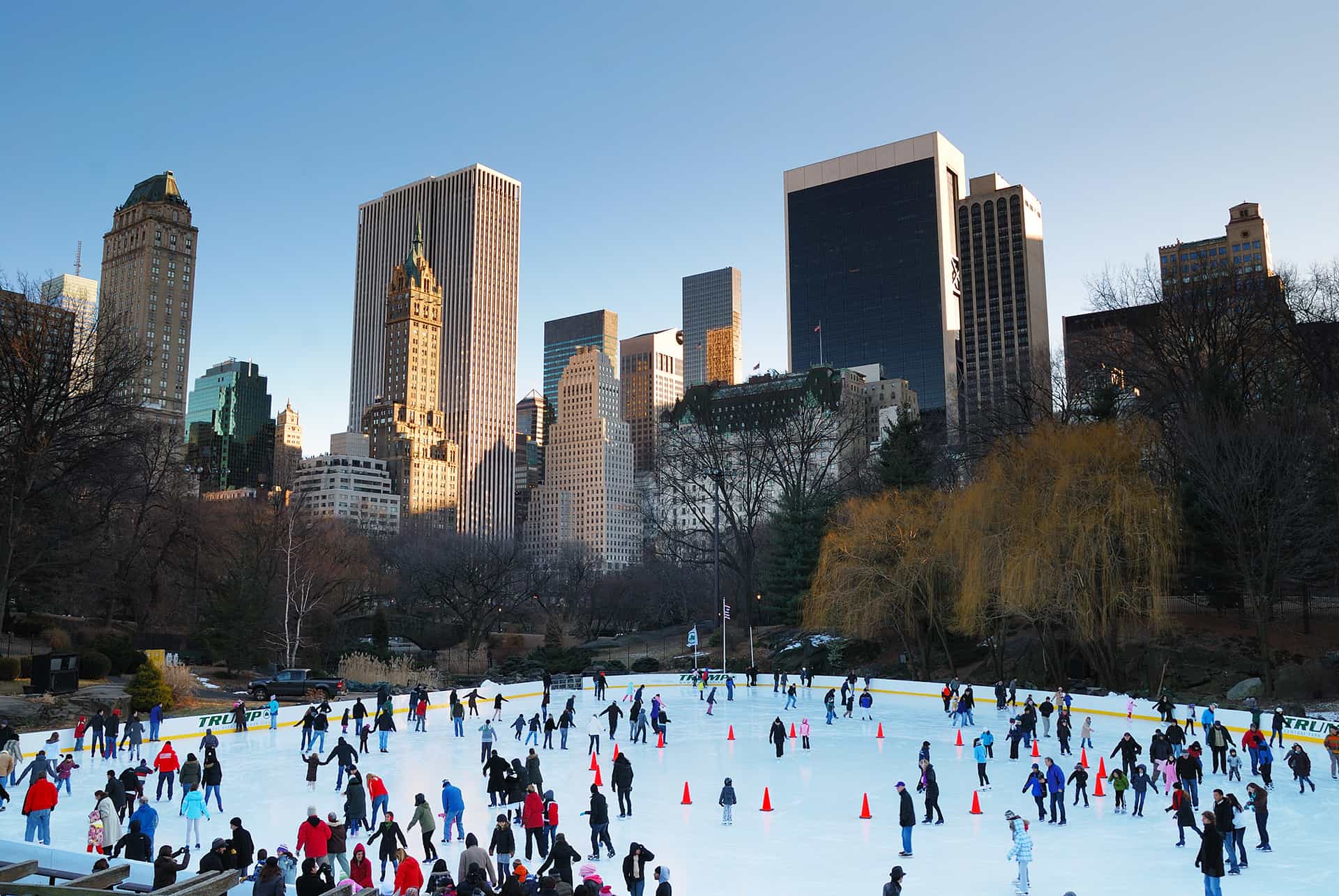 While Times Square is the iconic place to celebrate the New Year in New York, Central Park is not to be outdone. The park will be a perfect place to spend the last night of the year, especially if you are with your family and children.

Although very lively, the area is still much less crowded than Times Square. You'll be able to move around much more easily and won't have to stand for hours on your New Year's Eve in New York. Throughout Central Park, activities for young and old alike are available in a very friendly atmosphere. It's also the best place to watch the Central Park fireworks, which I'll tell you more about later.

And why not come back the next day, in the morning, to do some ice skating? 🙂

Although there are concerts all year round in New York, it is on New Year's Eve that you’ll find the largest choice of shows. Some of the big star concerts are one-offs, while others take place every year.

Some of the city's venues, such as Pier 36, hold New Year's Eve parties every year. Jessie’s Girl has a special annual concert called “New Year’s Eve Party with Jessie’s Girl”, which pays tribute to the greatest hits of the 1980s.

The Future Positive New Year's Eve Party has been an annual New Year's Eve event at the Museum of Reclaimed Urban Space since 2013. The party offers live music and crazy performances in a particularly joyous atmosphere.

On December 31, you can enjoy a fun-filled evening for the whole family at the AMC complex near Times Square. From 7 pm to 1 am, the AMC Times Square NYE Family Fun Fest will feature DJ performances and screenings of the latest blockbusters. There will also be singing, dancing and even access to the arcade.

At the McKittrick Hotel, you can celebrate the New Year with the King’s Winter Masquerade. All night long, you will enjoy a dinner show, live jazz bands, art exhibits and a dance floor party.

Of course, Broadway is THE place to go in New York to see all kinds of shows. Each year, you will have the opportunity to see a large number of performances on this mythical avenue. You can book a ticket in advance on the Internet to see the greatest plays and musicals.

At midnight, a fireworks show is launched from the roof of the One Times Square. This is probably the most famous firework display in the city and the atmosphere is absolutely amazing. To see it in good conditions, you'll have to get there very early and stand for long hours, all while being very crowded.

There are concerts, dance performances and family activities in the park throughout the evening, and the first shot marks the start of the Midnight Run. 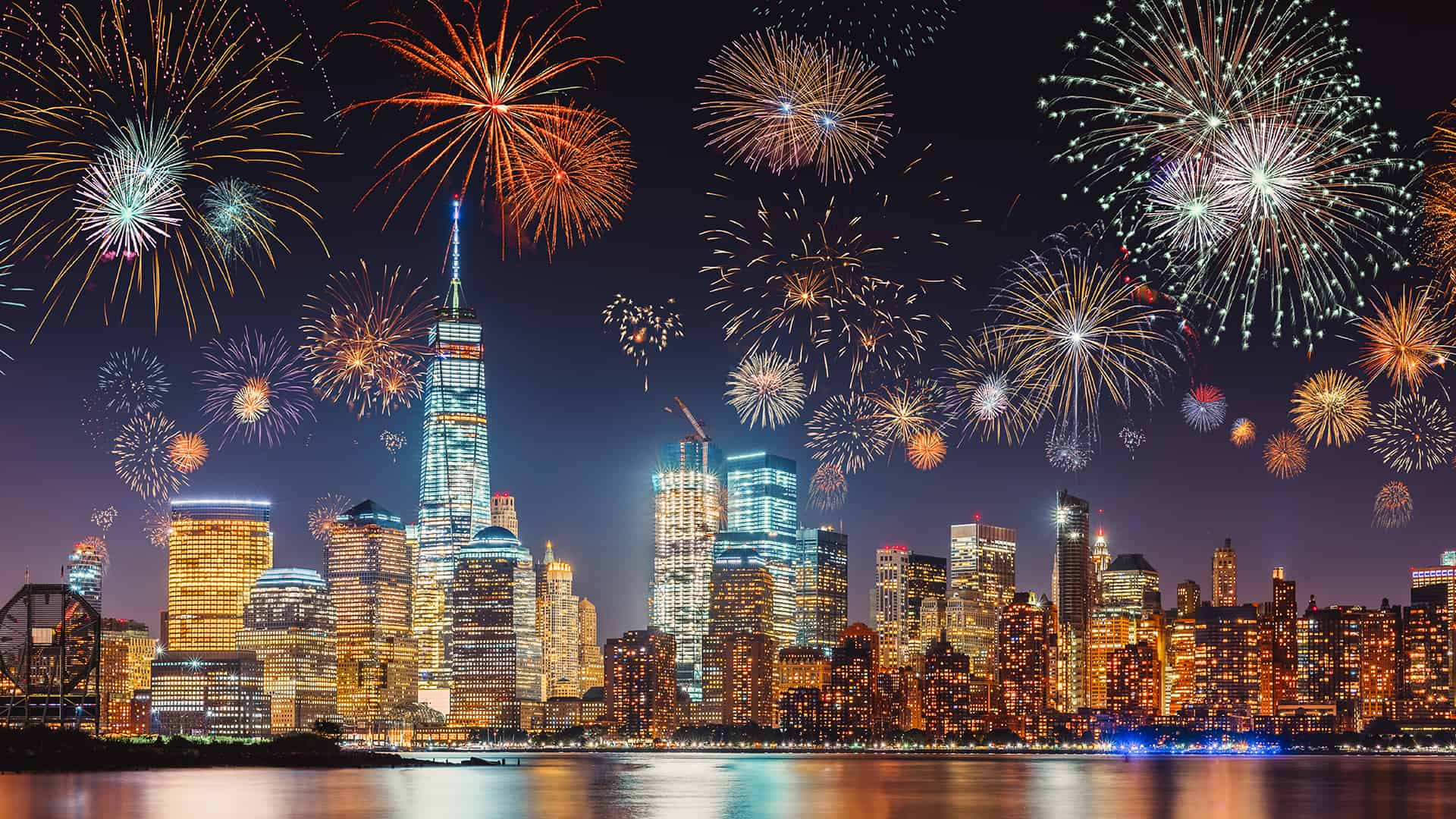 In Brooklyn, you will be able to see several fireworks displays, but the most impressive is the one in Prospect Park. Starting at 10 pm, a show takes place at the Grand Army Plaza – and from midnight onwards, you can watch a large firework display that lasts about 15 minutes.

This is one of the most popular fireworks displays in the city, and to get the most out of the show, I recommend going to the park on the West Drive side, or going directly to Grand Army Plaza.

The Statue of Liberty Fireworks

Near Liberty Island, on New York Bay, a large fireworks display is held every December 31. The 30-minute show is one of the most impressive New Year's Eve displays you'll ever see. If you opt to see it on a cruise, you will enjoy an even better view while avoiding the crowds.

Some cruise lines offer to take a New Year's Eve trip and spend an evening on board a ship. There are several options available, and you can simply watch the fireworks while sipping a glass of champagne, or choose the dinner and DJ dance party option, all while cruising on the Hudson River.

If you want to eat on board, I would recommend dinner cruises rather than buffet cruises. Firstly, if you are travelling as a couple, dinner cruises make for a very romantic moment, which you will not forget anytime soon. Also, cruises that only offer an open buffet are often more crowded. On board, you won't always be able to find a place from which to comfortably eat and enjoy the view of the Manhattan Skyline.

Whichever option you choose, the highlight of the cruise will be the Statue of Liberty fireworks display, which you will be able to enjoy far better than from most land-based locations. The free 24/7 Staten Island Ferry can also be boarded to enjoy the fireworks in New York Bay.

Celebrate the New Year in New York with sport

If you want to have a sporty New Year's Eve in the city, you can choose between two great gatherings. 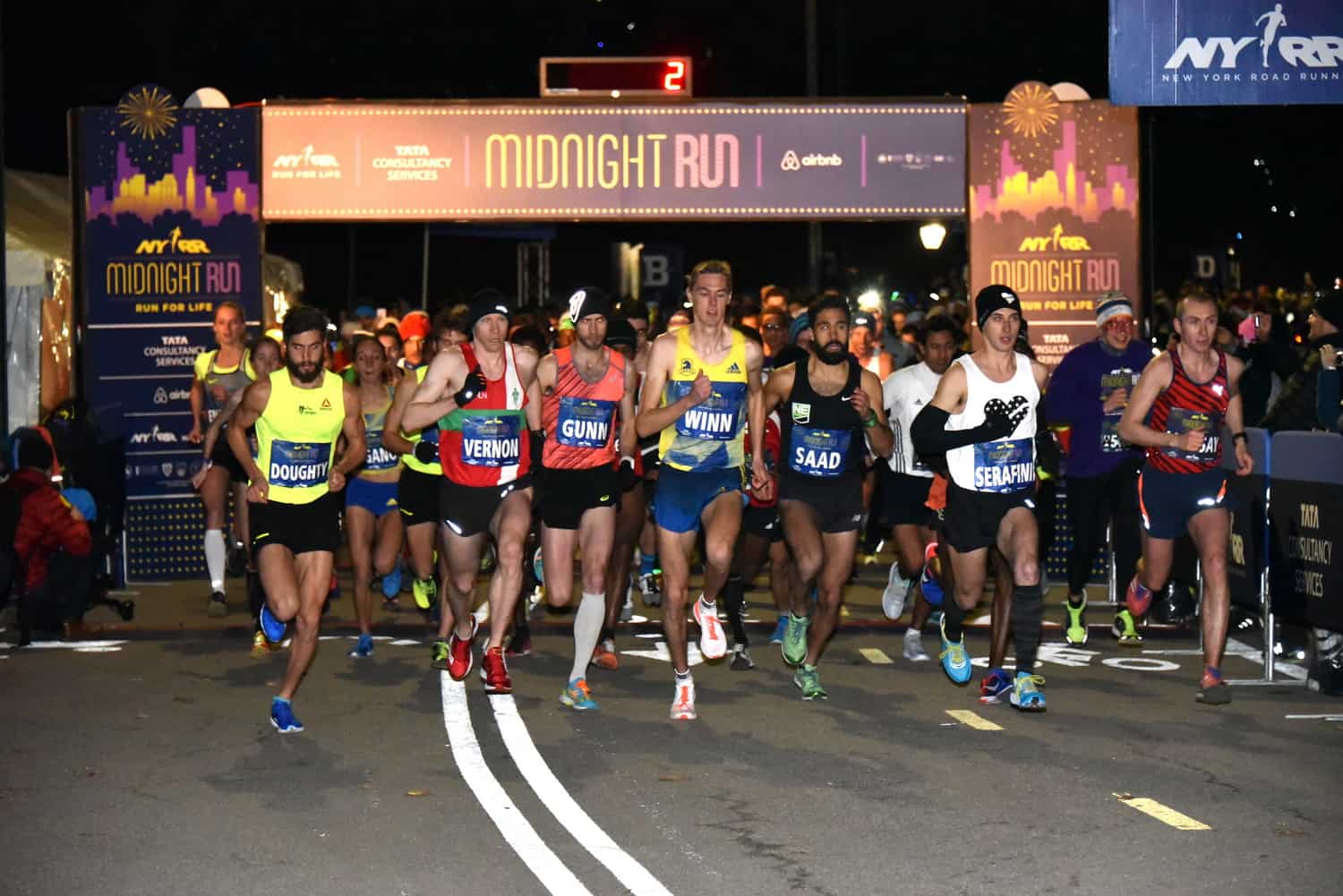 This run, organised by the New York Road Runner, takes place every year on 31 December. While the fireworks are in full swing, the 4-mile run is launched from the bandstand in Central Park. To participate, you'll need to pay a $60 entry fee (£45), and register by December 15.

During the two hours leading up to the Emerald Nuts Midnight Run, there will be live entertainment and even a costume parade. Some participants will not hesitate to keep their costumes on to run. As soon as the first fireworks sparkle in the sky, the runners take off and run through a good part of Central Park.

And this concludes my article on how to spend the New Year's Eve in New York! As you can see, there are many things to do, and no matter what you choose, you're sure to spend an amazing and magical moment. Happy New Year! 😉