Visiting the borough of Brooklyn: what to do and see?

Article written by Amélie on 3 May 2022
Category : New York

When you think of Brooklyn, the first things that come to mind are the Brooklyn Bridge and the street art. But this borough of New York has so much more to offer! There is so much to do and discover beyond the East River that this borough has truly become a must-see on a trip to New York.

Brooklyn is one of the five boroughs of New York City, along with Manhattan, Queens, Staten Island and the Bronx. More than just a borough, Brooklyn is in fact the most populous of New York’s boroughs – more than 2.5 million people live there.

Historically, Brooklyn was founded by Dutch settlers who moved into the area after buying the territory from the Mohawks. In 1646, Brooklyn became the first township in New Netherland. Its name was derived from the town of Breukelen in the Netherlands. It was not until 1898 that Brooklyn finally became a borough of New York City in its own right.

To get a comprehensive overview of the different boroughs of New York during your stay, you can opt for a half-day guided tour of the following boroughs: Bronx, Queens and Brooklyn. You will quickly get a feel for the multicultural nature of New York City, and following the tour you will be able to delve deeper into the neighbourhood(s) you liked the most 🙂

TO SEE THE FULL PROGRAMME OF THE EXCURSION, CLICK HERE

Today, Brooklyn has expanded a lot – it is now the second-largest borough in New York. It is divided into a large number of neighbourhoods, many of which are former villages from the Dutch colonial era. Most of them have now become residential areas, but some are also among the most active and dynamic areas of the city. The latter make Brooklyn a young and trendy borough, and one in which there is much to discover during a stay in New York. 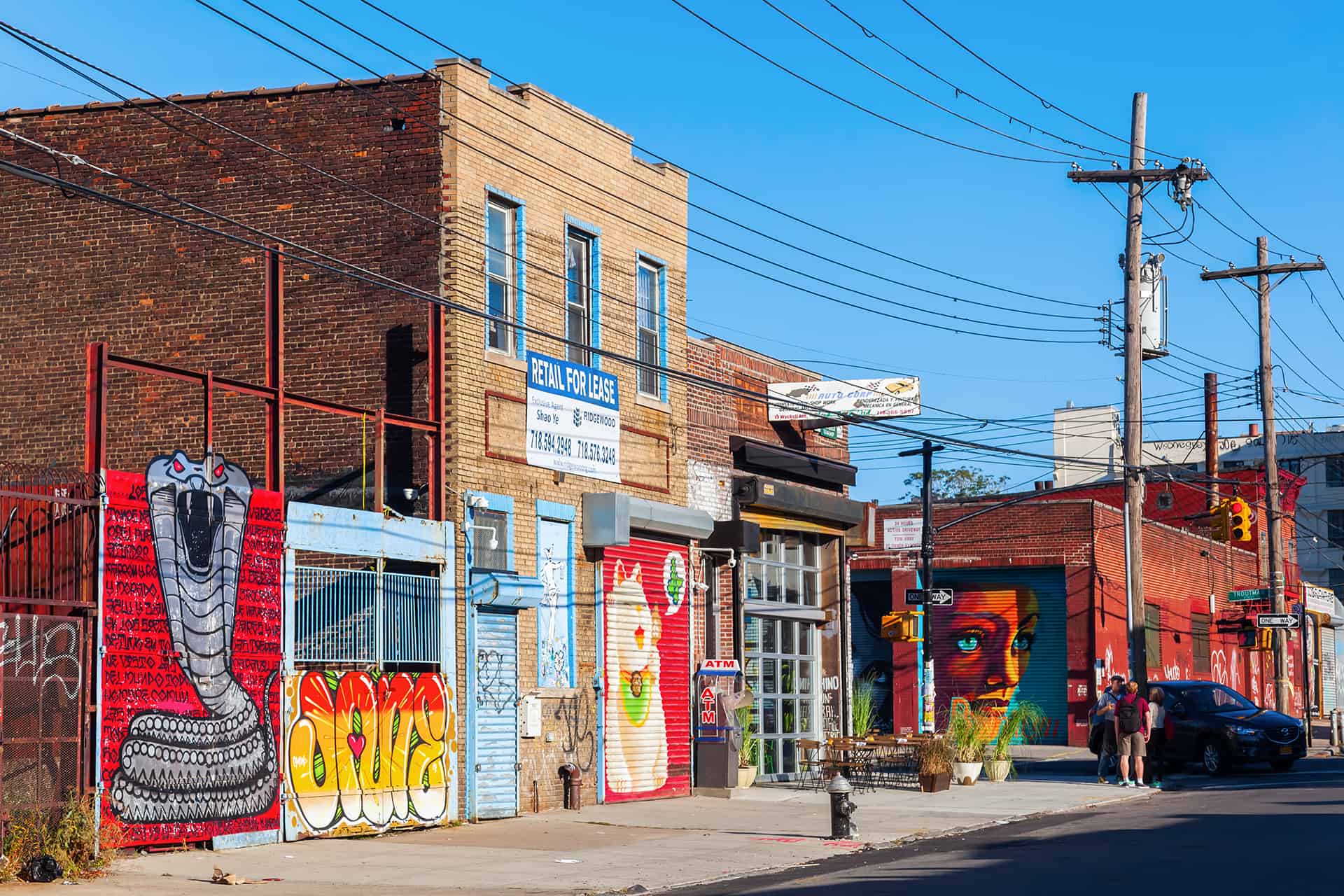 Bushwick was an unfriendly neighbourhood in Brooklyn, which has changed enormously since the first half of the 2000s, thanks to a vast rehabilitation programme led by the municipality. Today, it is clearly part of the neighbourhoods to discover in New York – especially if you like street art.

Located in the north of Brooklyn, Bushwick has truly become the neighbourhood of choice for artists and creators. The Bushwick Collective brings together some of the most renowned street art artists. You can find giant murals made by this collective on Jefferson Street and Troutman Street. In this trendy neighbourhood, you will also find a large number of restaurants with original concepts, which offer food from all over the world.

If you're interested, you can take a street-art-themed walking tour of the area. You will admire the murals that are everywhere in the neighbourhood and learn more about the lifestyle, style and techniques used by the artists. More details by following this link. 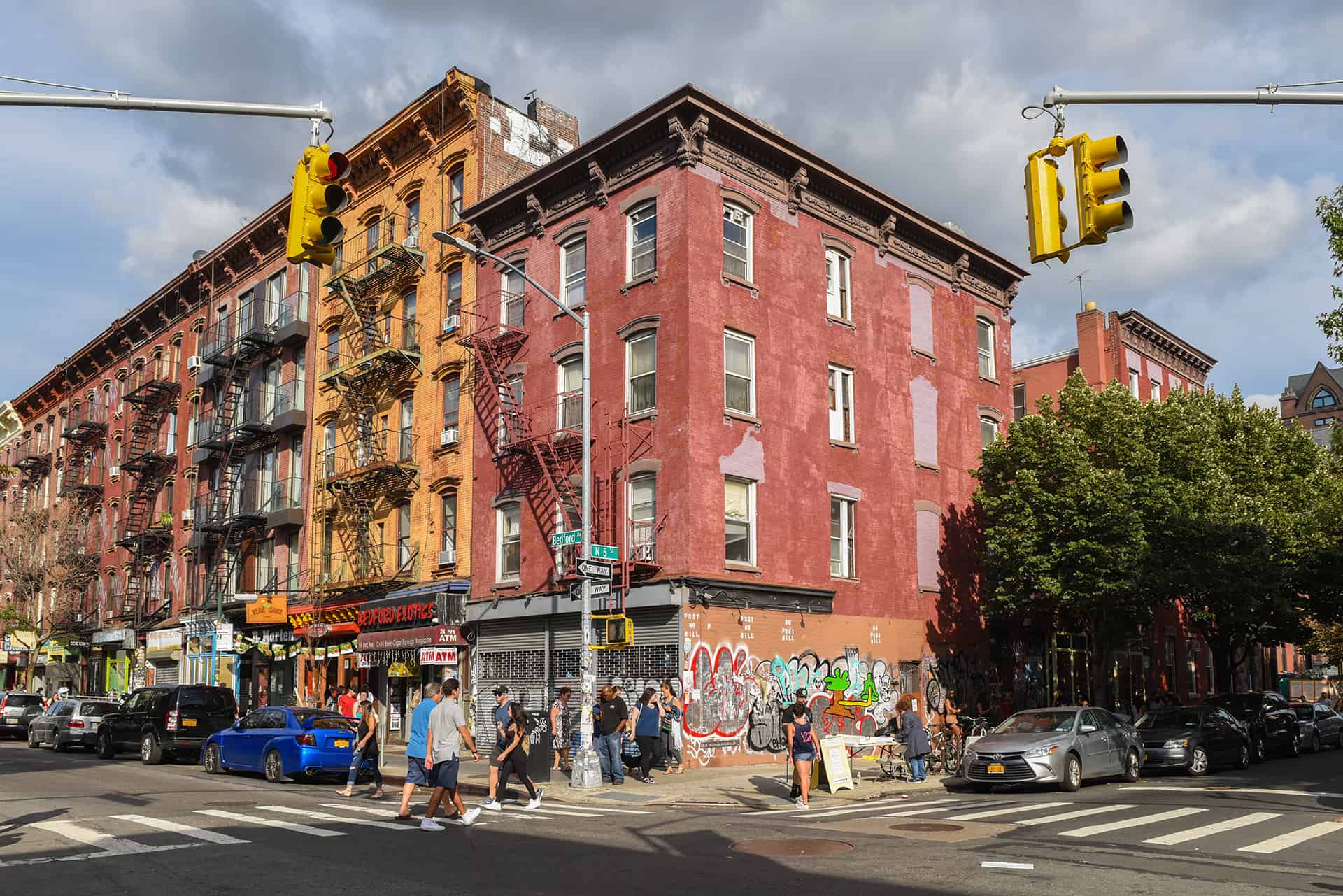 Williamsburg is the typical Brooklyn neighbourhood. Located between the East River and Bushwick, it is far from the classic image of New York. For several years now, the rise in rents in other areas – and particularly in Manhattan – has pushed a certain fringe of the population to settle in this neighbourhood. Among these newcomers are a fairly large number of artists, students and hipsters, and Williamsburg has quickly become one of the hippest neighbourhoods in the city.

On the streets of Williamsburg, you'll see fewer tourists than in other neighbourhoods such as Bushwick or Dumbo. You will enjoy a unique atmosphere and find a wide range of shops, restaurants and bars.

There is also a lot of street art – especially on Belford Avenue, Williamsburg's main thoroughfare.

The weekend is the perfect time to explore this neighbourhood. For example, you can go to the large Williamsburg Flea Market, ideal for finding vintage clothes and objects. If you visit New York between April and October, I have only one word to say: Smorgasburg. It is the largest weekly open-air food market in the United States – every Saturday from 11 a.m. to 7 p.m., you will find a hundred stalls offering incredible culinary specialities from all over the world.

Viewing the Brooklyn Bridge from a cruise 🛳️

It is unthinkable not to discover this mythical bridge during a stay in New York. You can do so in different ways, and I actually recommend trying to get different views if you get the chance 🙂

You can get a close-up view by driving by or taking a walk or bike ride on the bridge. The most spectacular view is from afar – by taking a helicopter flight over New York City or a cruise on the Hudson River.

The latter two methods will allow you to see much more than just the bridge. If you opt for a cruise (or a helicopter flight), for example, you will get to admire the Brooklyn Bridge, but also most of the city’s other main sites: the Manhattan Skyline, the Statue of Liberty, the Empire State Building, ...

By day or by night, and no matter what time of year – the rendering will be just beautiful 😊

MORE INFORMATION ABOUT THE CRUISE BY CLICKING HERE 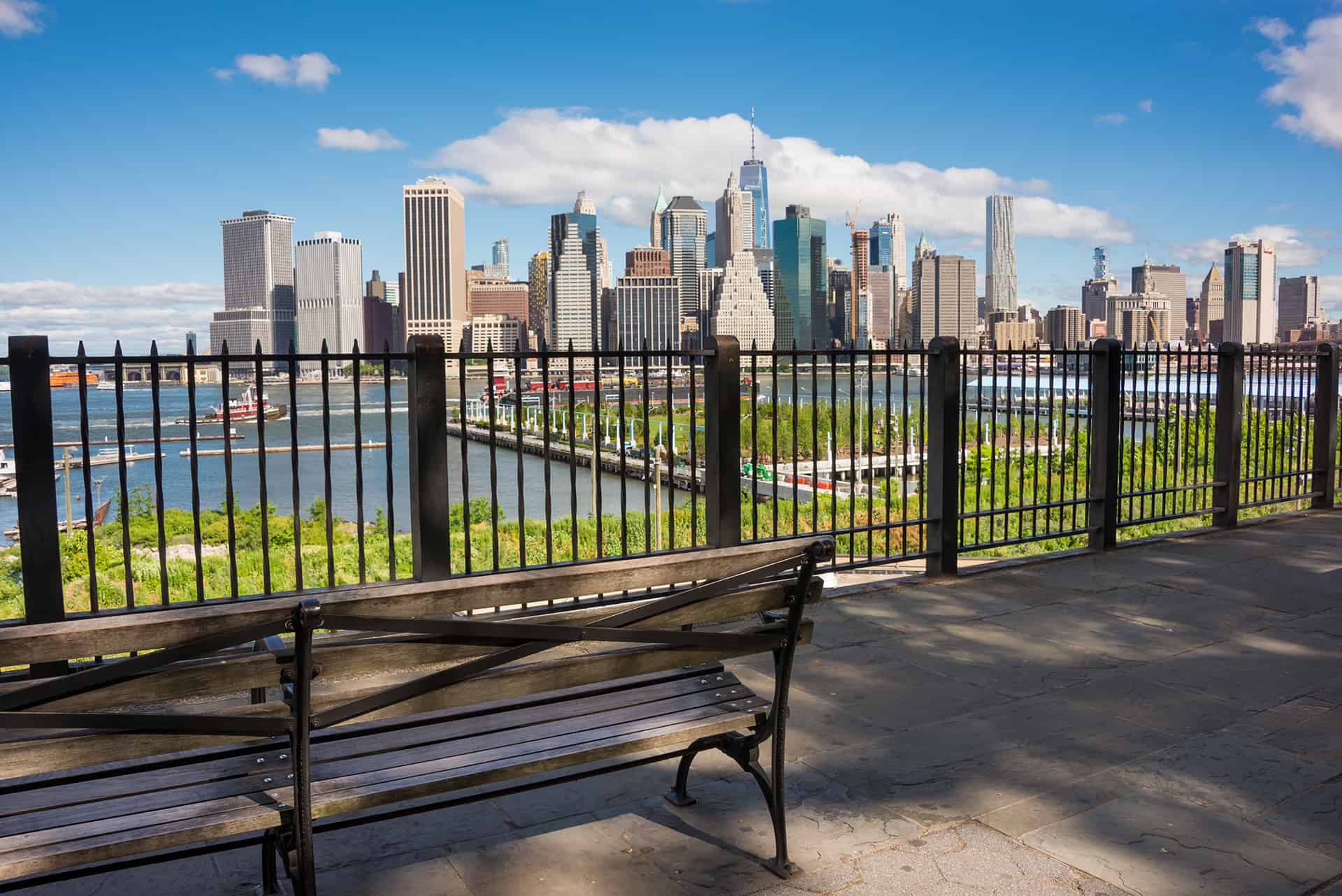 The must-visit place of this area is undoubtedly the Brooklyn Bridge Park. This very large park actually spans the neighbourhoods of Brooklyn Heights and Dumbo, along the banks of the East River. It is one of the most beautiful parks in New York, and it will be perfect for a relaxing moment in a green area. You will also be able to start walking along the Brooklyn Heights Promenade and admire the view of the Manhattan skyline.

If you're feeling hungry, you can find the Brooklyn Ice Cream Factory, under the Brooklyn Bridge. It is one of the most famous ice cream shops in the city. A few steps away, Grimaldi’s will be the perfect place to try a New York pizza. In these popular places, you will probably have to wait for a while to be served – but I don’t think you will regret the wait.

DUMBO is an acronym that simply indicates the neighbourhood’s geographical location: "Down Under the Manhattan Bridge Overpass". It is therefore located just beyond the Manhattan Bridge. In this former industrial district, factories and vast warehouses have been converted into shops, cafés, restaurants and art galleries.

With its cobblestone streets and very large red-brick buildings, Dumbo is truly different from other parts of New York. It also has the advantage of a direct view of the Skyline and the Manhattan Bridge. It is in this area that you can obtain a mythical view of New York.

On Water Street, the Empire State Building in the distance lines up perfectly with the Manhattan Bridge, forming what is perhaps the most beautiful view of New York from the ground.

Near the park, you will find Luke’s Lobster, a restaurant in which you can enjoy a lobster roll – a popular lobster sandwich typical of the northeastern United States and Canada. On Jay Street, the Brooklyn Roasting Company will be the perfect place to relax in a comfy chair while enjoying some of the best coffee in the city. 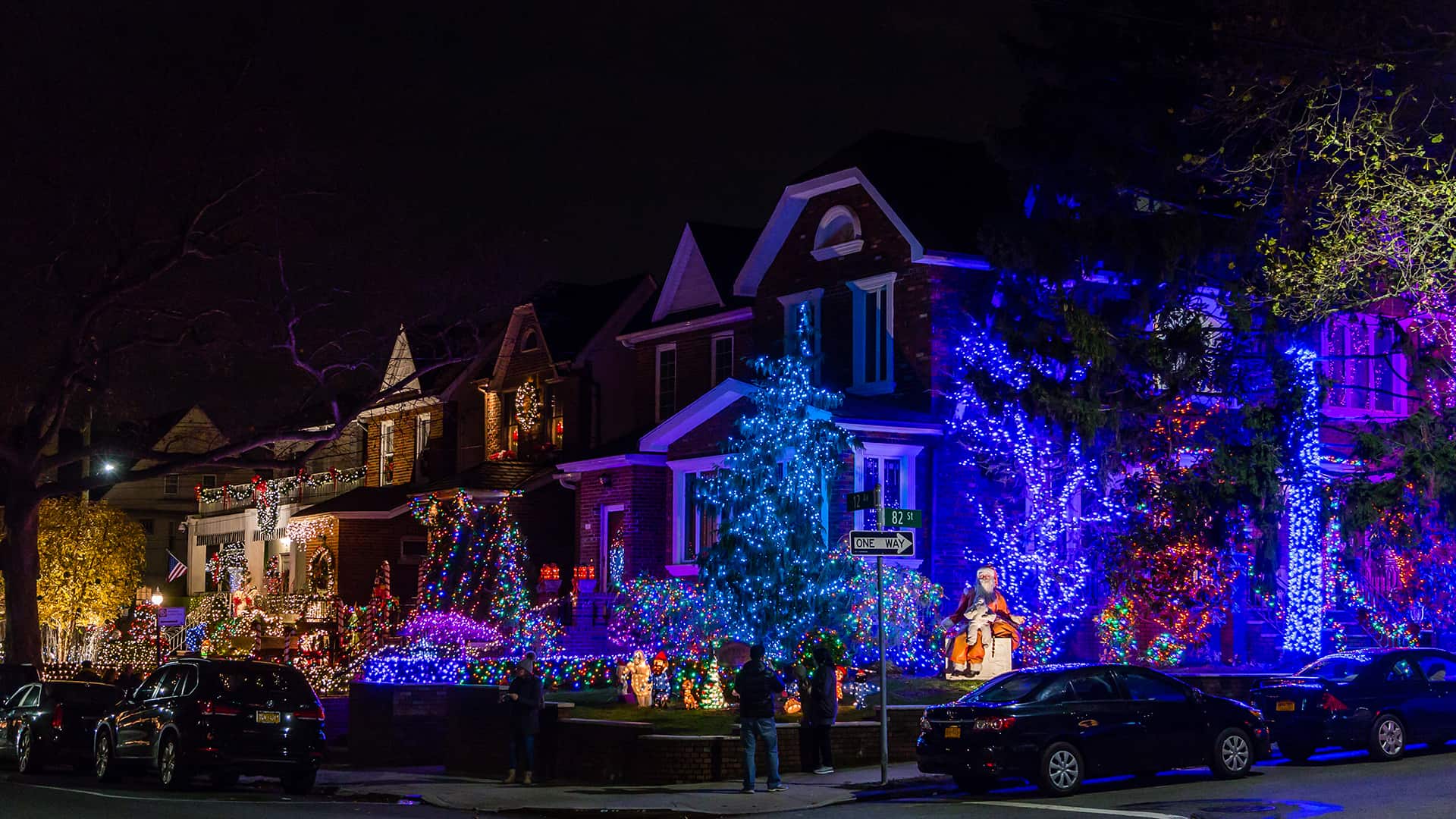 This is an upscale residential neighbourhood that might seem very quiet and that is not necessarily of much tourist interest during the year. However, if you plan to visit New York during the Christmas season, Dyker Height is definitely one of the neighbourhoods you should not miss.

The residents of this neighbourhood have a true battle going on, where the goal is to have the best decorated and brightest house. It is clear that they have a sense of competition – the facades of the houses in Dyker Heights are all amazing during the Christmas season in New York.

The residents do not hesitate to call on specialised companies to decorate their houses, which sometimes have nothing to envy the window displays of the department stores on Fifth Avenue. Dyker Heights is truly the symbol of the Christmas atmosphere in New York.

It is possible to take a tour from Manhattan to discover this residential area, which becomes truly magical during the holiday season. You'll leave by bus with a guide and explore not only Dyker Height, but also other parts of Brooklyn – and of course you'll stop by the famous Brooklyn Bridge! The tour is quite complete, as it will allow you to enjoy the Christmas atmosphere (which is really atypical and which you won't find anywhere else) while discovering the essence of the Brooklyn borough.

All in all, this is THE tour to do at this time of the year 🙂

MORE DETAILS ON THE DYKER HEIGHT TOUR BY CLICKING HERE 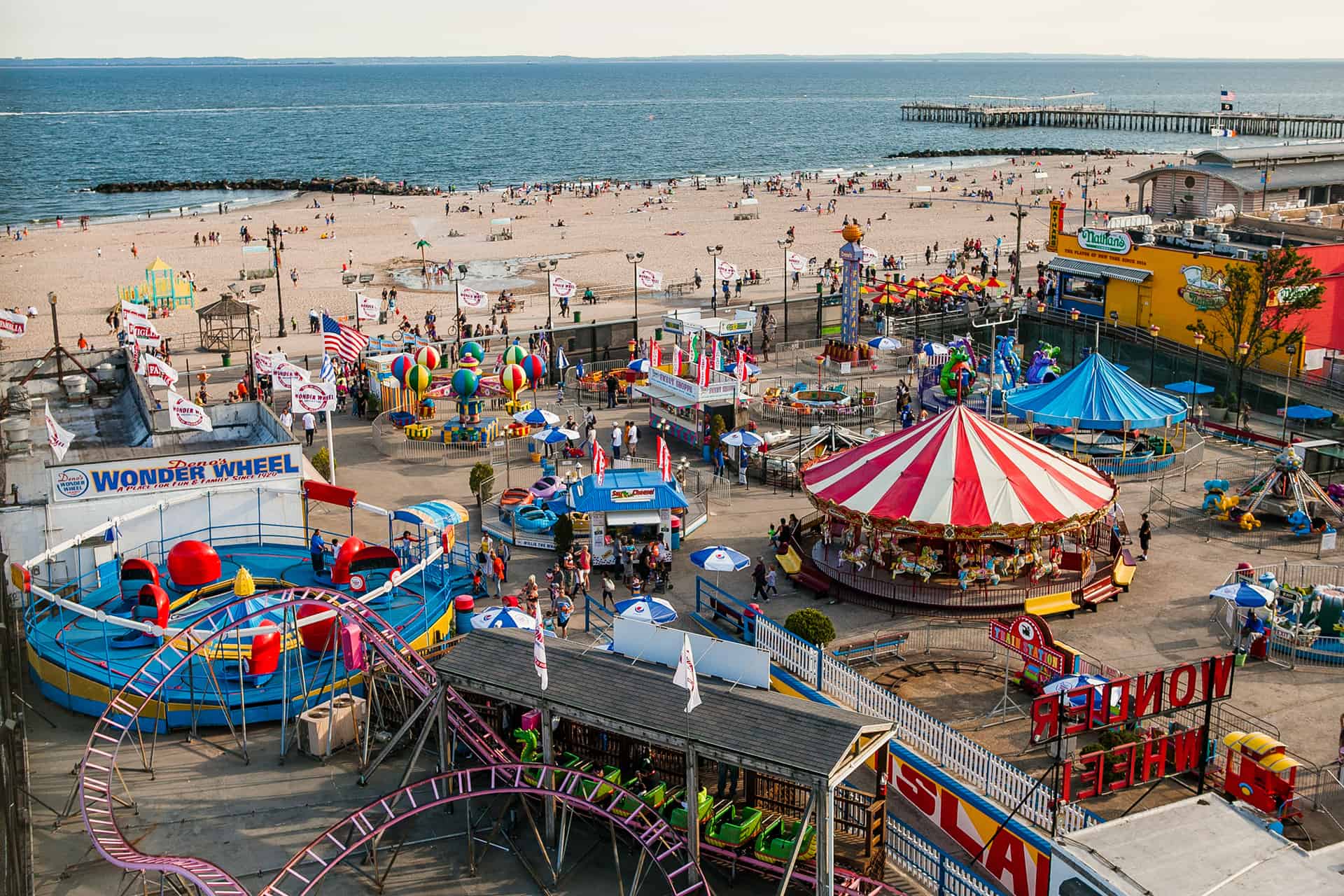 No matter when you visit New York, a trip to Coney Island seems almost mandatory for a successful trip. Don't forget that Brooklyn is located right on the ocean – it would be a shame not to take advantage of that.

Coney Island is home to one of the city's largest beaches, with a long boardwalk stretching for over 3 kms. New York's only aquarium is actually located along that boardwalk. It is also where you'll find Luna Park, the famous amusement park with a 45-metre Ferris wheel.

A visit to New York would not be complete without a hot dog. Nathan's Famous is renowned for making the best hot dogs in the city – if not the world! One thing is for sure, this will be the best meal you can have in New York for only $3. Speaking of: on the 4th of July, a bank holiday, a contest for the biggest hot dog eater is even organised at Nathan's Famous.

Prospect Heights is a neighbourhood known primarily for two things. The first is the presence of the Brooklyn Museum – the second largest museum in the city (behind the MET). This major cultural venue in New York City houses more than one and a half million sculptures, paintings and art objects of all types.

TO LEARN MORE ABOUT THE BROOKLYN MUSEUM, CLICK HERE 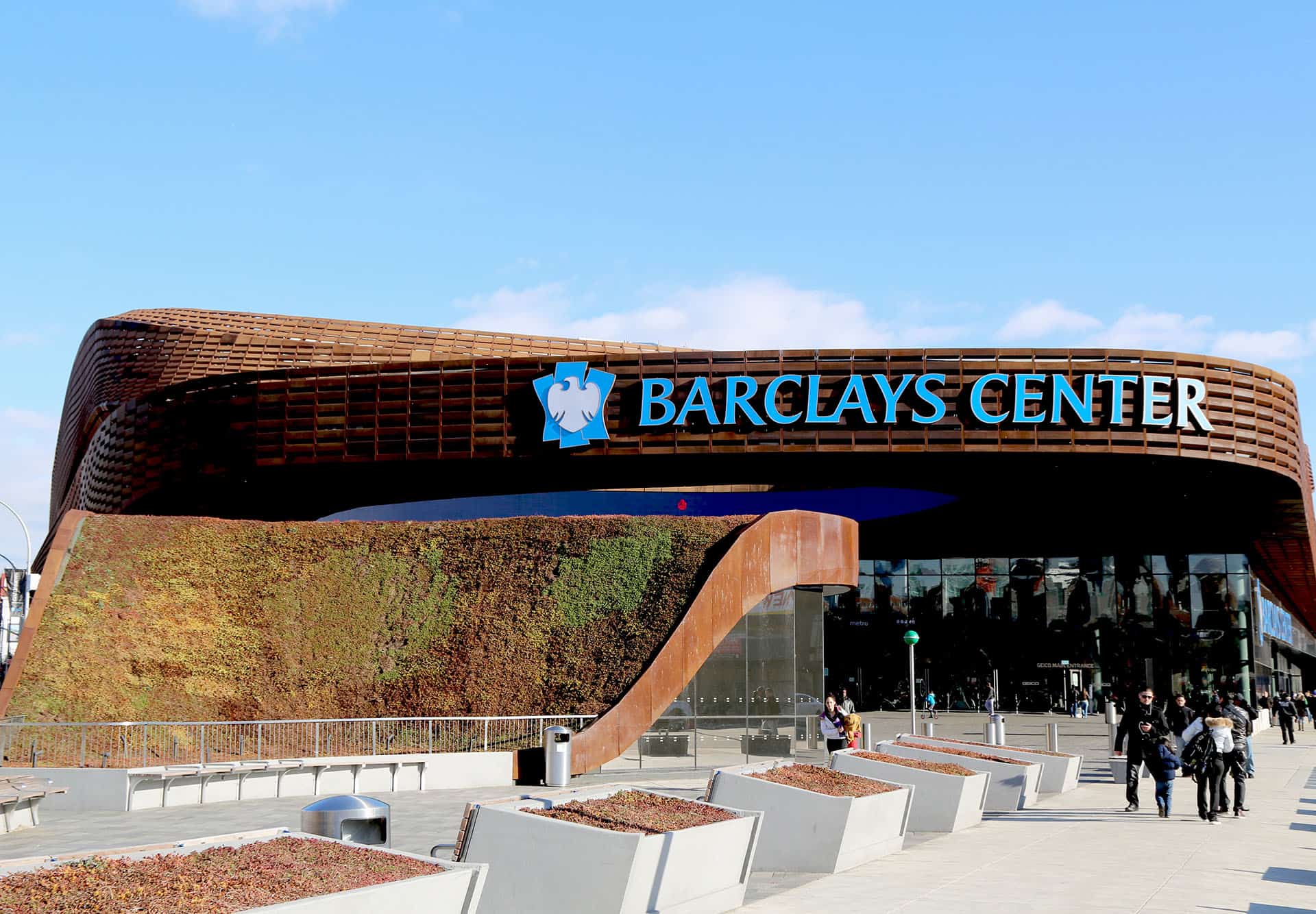 The second major attraction in the neighbourhood is the Brooklyn Nets basketball team. This NBA team is one of New York's two flagship teams, the other being the Knicks. The Barclays Center, located in Prospect Heights, is the Nets' home venue. Tickets are generally cheaper than those for the Manhattan team, so a trip to New York could be the perfect opportunity to catch a great NBA New York game.

SEE THE NETS' GAME SCHEDULE FOR YOUR DATES BY CLICKING HERE

And this concludes my article on Brooklyn! I hope you've seen a few things you now wish to further discover 😉 And above all, enjoy your stay in New York!