WHAT TO DO IN NEW YORK during SUMMER? FIND OUT WHAT YOU CAN DO IN JULY AND AUGUST

If you're planning a trip to New York in the summer, you're probably wondering what you will be able to do and see during your stay. Worry not: in this very large and very lively city, many events are organised during the summer period. You'll always have plenty to choose from when it comes to sightseeing, and you'll never get bored.

In this short guide, I'll give you a quick overview of the main summer events in New York, and help you discover all that you can see and do in New York during the summer.

Obviously, summer is the hottest season in New York. During July and August, temperatures often exceed 30°C and can even reach 35°C. During this season, the weather is also very humid and it rains quite regularly, so don’t forget your umbrella. On top of that, thunderstorms occur quite regularly – especially at the end of a day.

Of course, you will still enjoy very pleasant weather for the vast majority of your summer stay in New York, and can absolutely go sunbathing at the beach or on the lawns of Central Park.

In the evenings, the weather will often be perfect for taking a walk and attending the many events that are held throughout the summer in New York.

Enjoying the beach in New York during summer 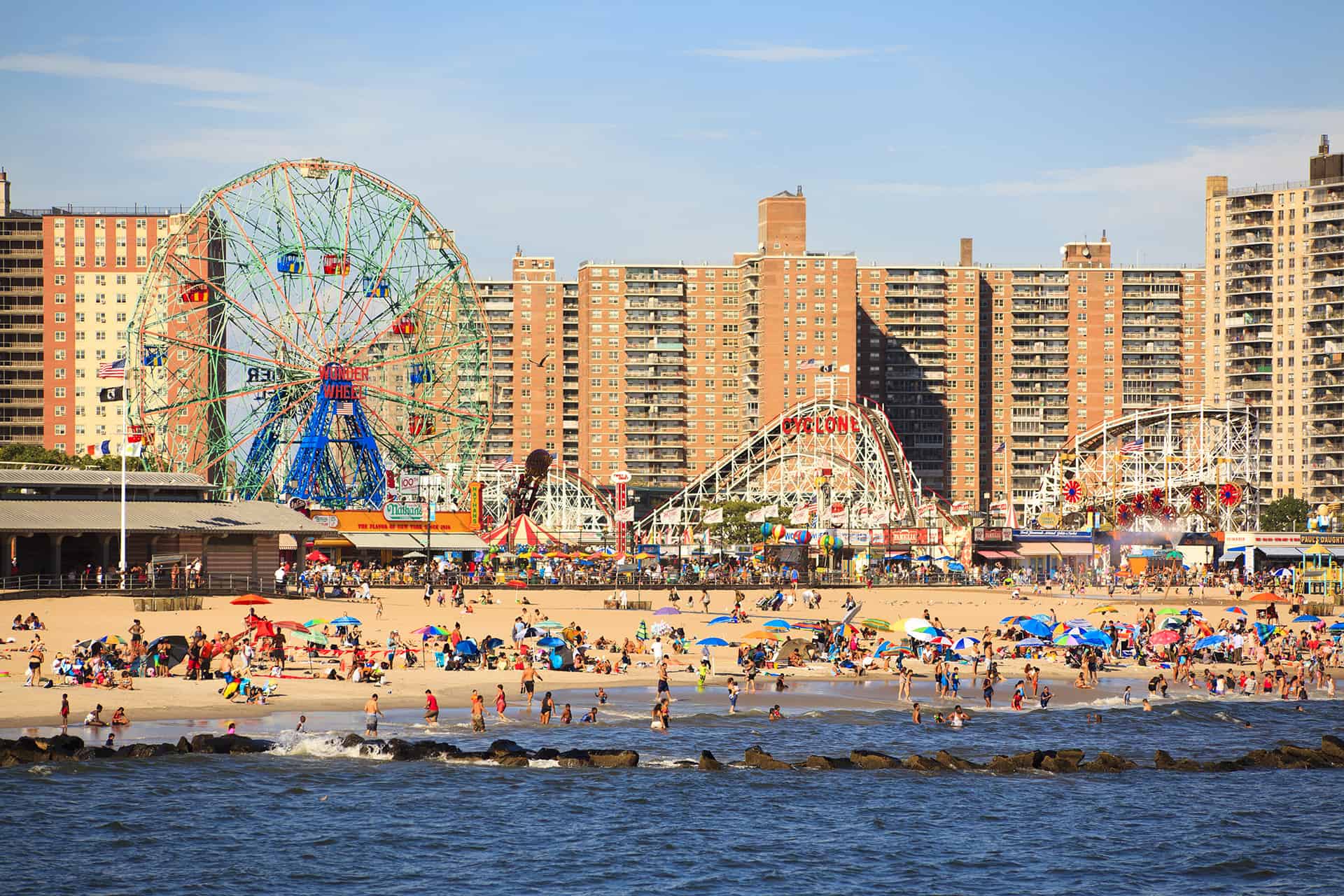 It's true that when you think of New York, the beach isn't necessarily the first thing that comes to mind. But for a summer stay, remember to pack your towel – there are some great beaches within walking distance of the city. The most famous beach is of course Coney Island: a long stretch of sand in Brooklyn that gets very busy in summer. Also in Brooklyn, you can go to the Brooklyn Bridge Park Beach, a very well equipped artificial beach located in the DUMBO neighbourhood.

In the Bronx, Orchard Beach is a large and popular beach, while you can find several beautiful beaches on City Island – a small and easily accessible island. In Queens, Rockaway Beach is a very long beach that stretches for about 11 kilometres and is a surfers’ favourite.

If you move away from the heart of the city and head towards Long Island, you will also find many beaches, including the famous Long Beach. All of New York's beaches are supervised and well-maintained, and most are well-equipped.

4th of July in New York 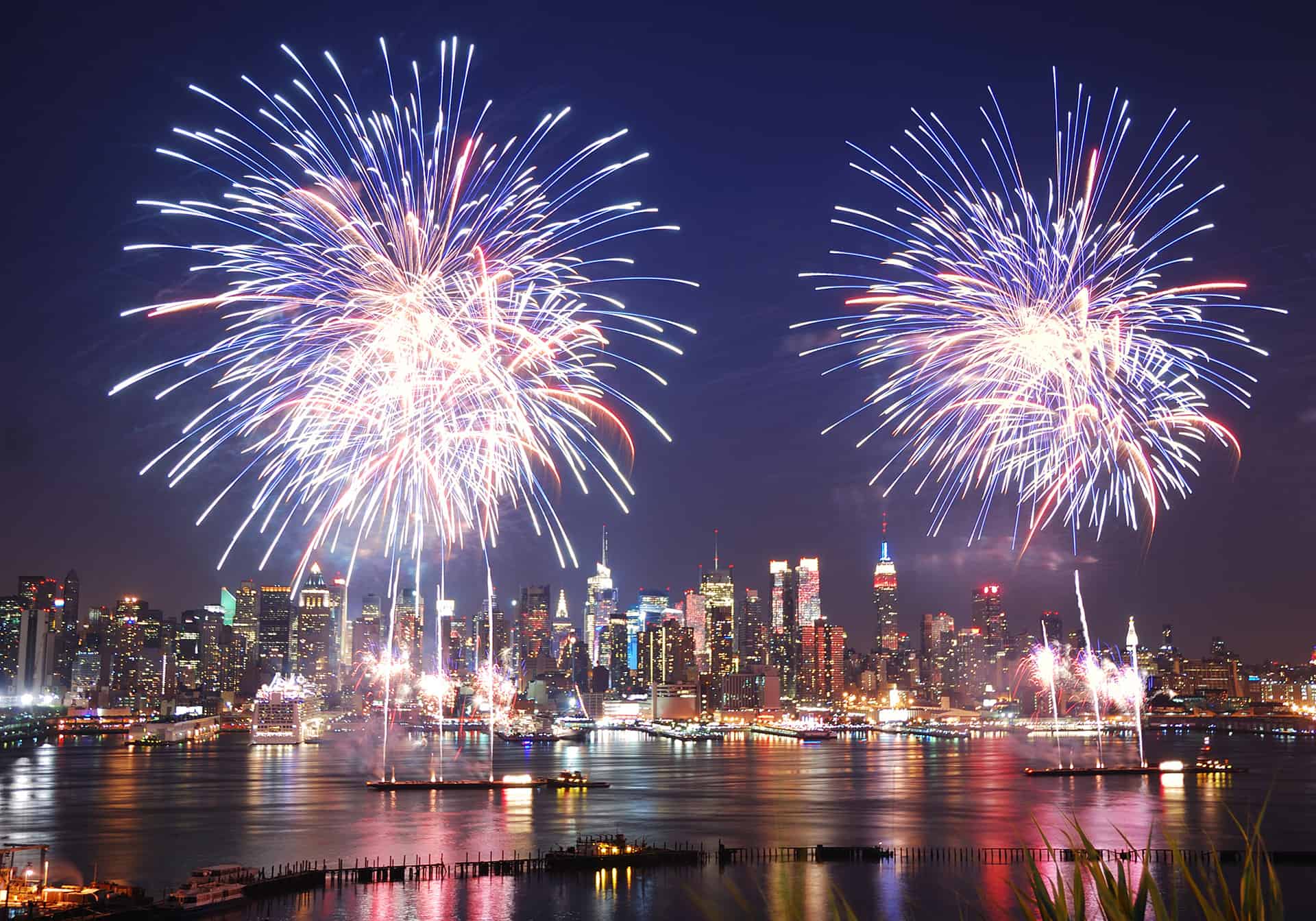 The 4th of July, Independence Day, is the major summer cultural event both in New York and throughout the United States. It's the U.S.’ National Day and one of the few days of the year during which the city's shops are closed. There are many activities to do on this day, but the most popular attraction is the fireworks display which starts at 9 pm.

This is one of the largest fireworks displays in the world, attracting around 3 million visitors each year. You can watch it from Brooklyn Bridge Park or from the river during a night boat ride or even a dinner cruise.

Another great way to see the show is from the One World Observatory, where you can enjoy a stylish evening and watch the fireworks from one of the best vantage points in the world.

In addition to Independence Day, there are many other events to experience during a summer in New York.

Every year, the Washington Square Music Festival, starting the second week of July. Every Tuesday during this event, you can attend free outdoor concerts in the heart of Washington Square Park. Classical music, jazz, tango... musicians from many countries are present. If you are in New York during the month of July, don't miss this unique opportunity to attend a concert in a magical setting – in one of the city's most beautiful parks.

Shakespeare in the Park

The Delacorte Theatreis an outdoor theatre located in the heart of Central Park, just a few steps from Belvedere Castle. Every year for over 50 years, from early July to mid-September, tens of thousands of people have attended free performances there. You can discover performances of plays by William Shakespeare, but also many other great classics. Famous actors and actresses such as Al Pacino, Meryl Streep and James Earl Jones have already participated in the Shakespeare in the Park. 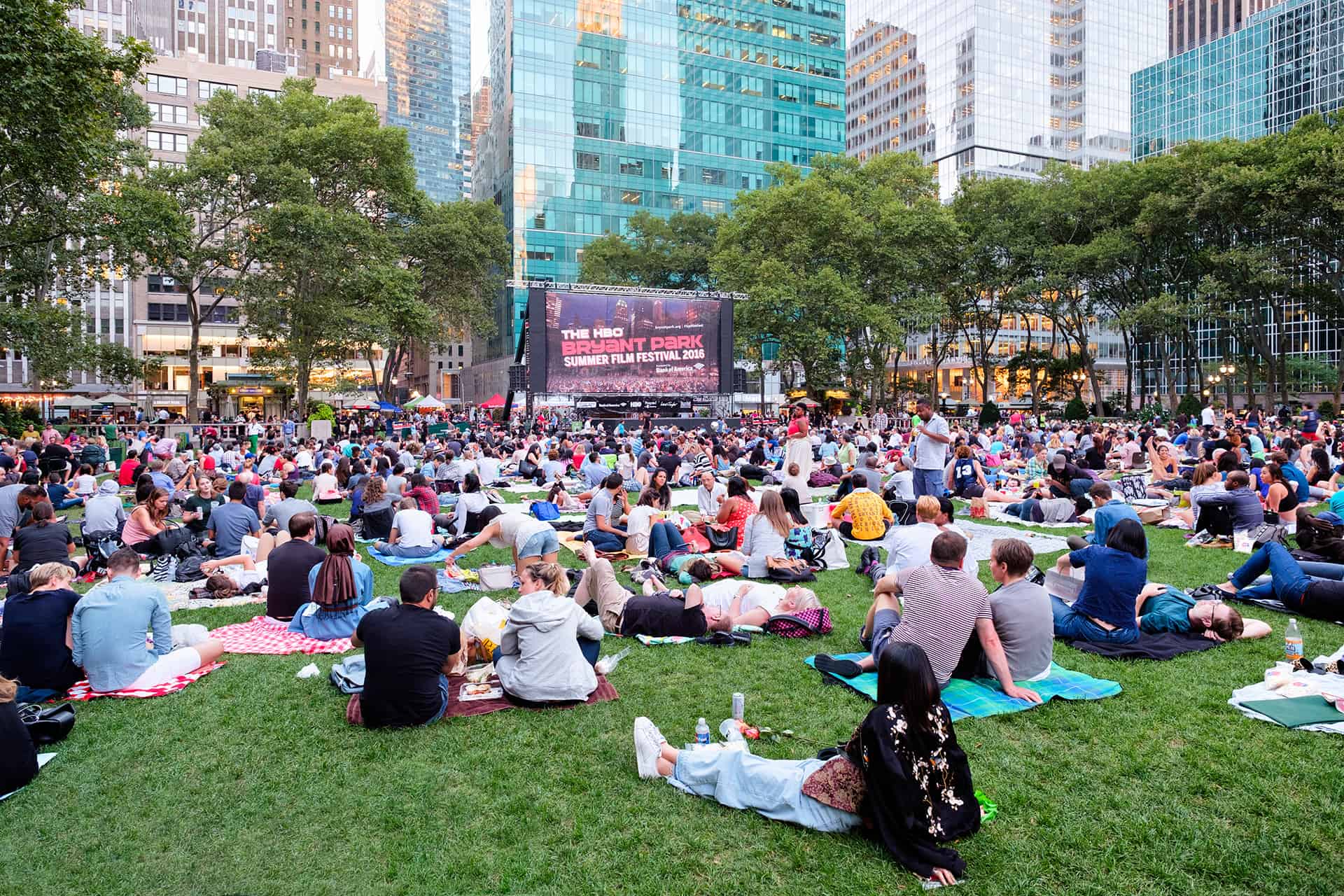 Here's another summer event that takes place in one of the city's largest parks, but this time it is dedicated to the Seventh Art. During the Bryant Park Summer Film Festival, you can enjoy outdoor film screenings every Monday evening in June and August, weather permitting. You can sit on the lawns as early as 5 pm (feel free to bring a picnic 😉) and the screenings start at 8 p.m.

New York is the cosmopolitan city par excellence, so it's no surprise that it also celebrates the French National Day. On 14 July in New York, you can attend Bastille Day, during which French expatriates parade and celebrate French gastronomy.

This is when French Restaurant Week takes place – where you can enjoy discounts in many establishments serving French food. On the Sunday before or after 14 July, a very large street party is organised on 60th Street, around the French Cultural Centre. Every year, about 10,000 people come to celebrate and pay tribute to French culture. You can see mime shows and choirs, and enjoy croissants, cheese, wine and many specialities from France.

From the second half of July to the middle of August, you can get great discounts at New York restaurants during NYC Restaurant Week. More than 300 restaurants in New York participate in this 3-4 week event, adjusting the price of their menus.

Chic, exotic, Italian, Chinese, French, American, pizzerias... 😋 Many establishments of all types offer discounted prices for this occasion. Some of the city's best-known restaurants, such as Del Frisco's and Red Rooster, participate in Restaurant Week. To enjoy these discounts, remember to book your table on the New York Tourist Board website.

Attend the US Open 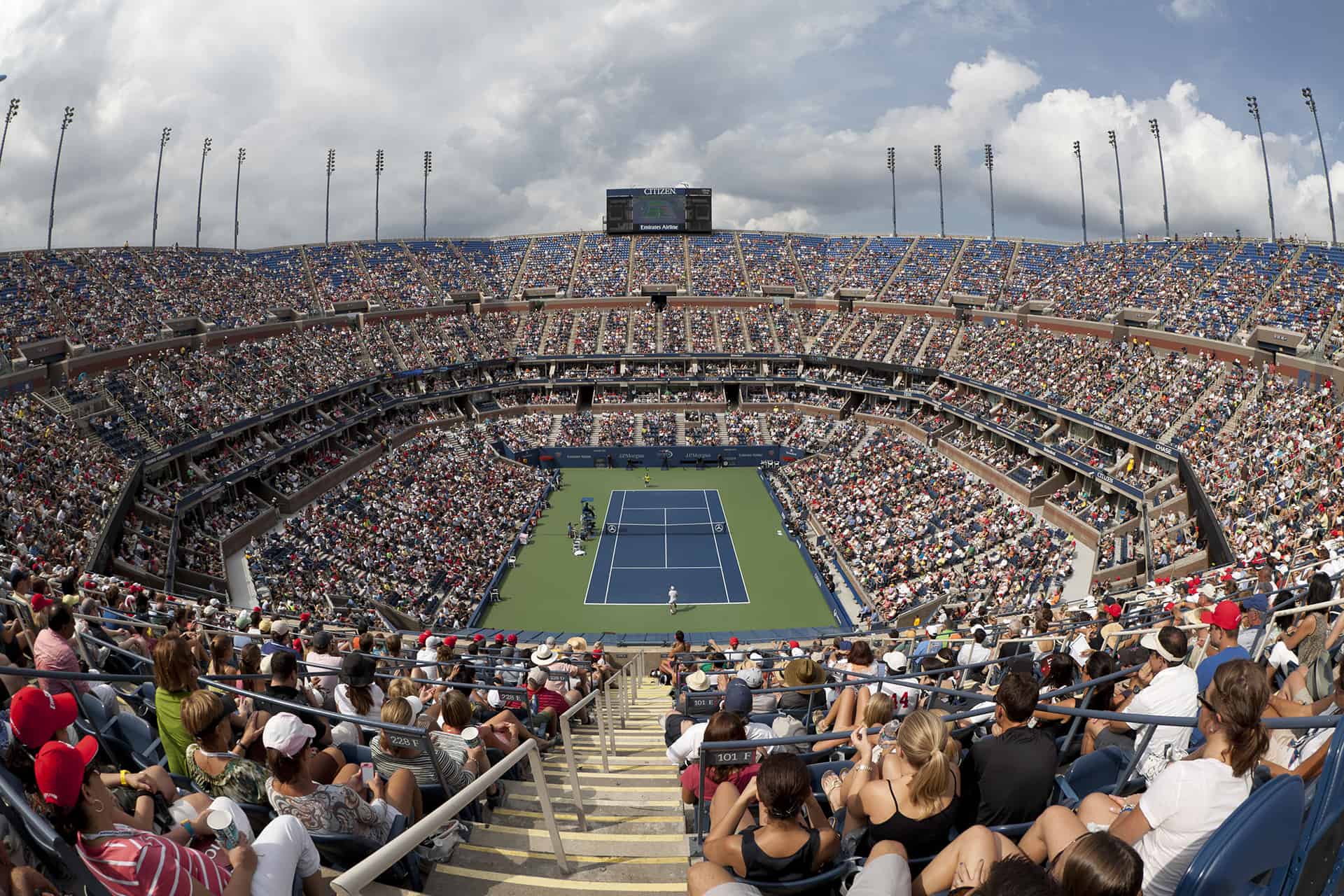 If you are travelling to New York at the end of the summer, you can go and watch the world's best tennis players play at the US Open, one of the four Grand Slam tournaments. The US Open takes place every year for a fortnight between the end of August and the beginning of September at Flushing Meadow, a New York City park located in Queens, near LaGuardia Airport.

The US Open is one of the largest annual sporting events in the United States.

Go to a baseball game

During the summer, you will have many opportunities to see the two New York teams: the Yankees and the Mets. Even if you're not a baseball fan, I really recommend taking the time to go to a baseball game in New York, to enjoy the unique atmosphere and discover the fervour of the city's inhabitants for this sport. 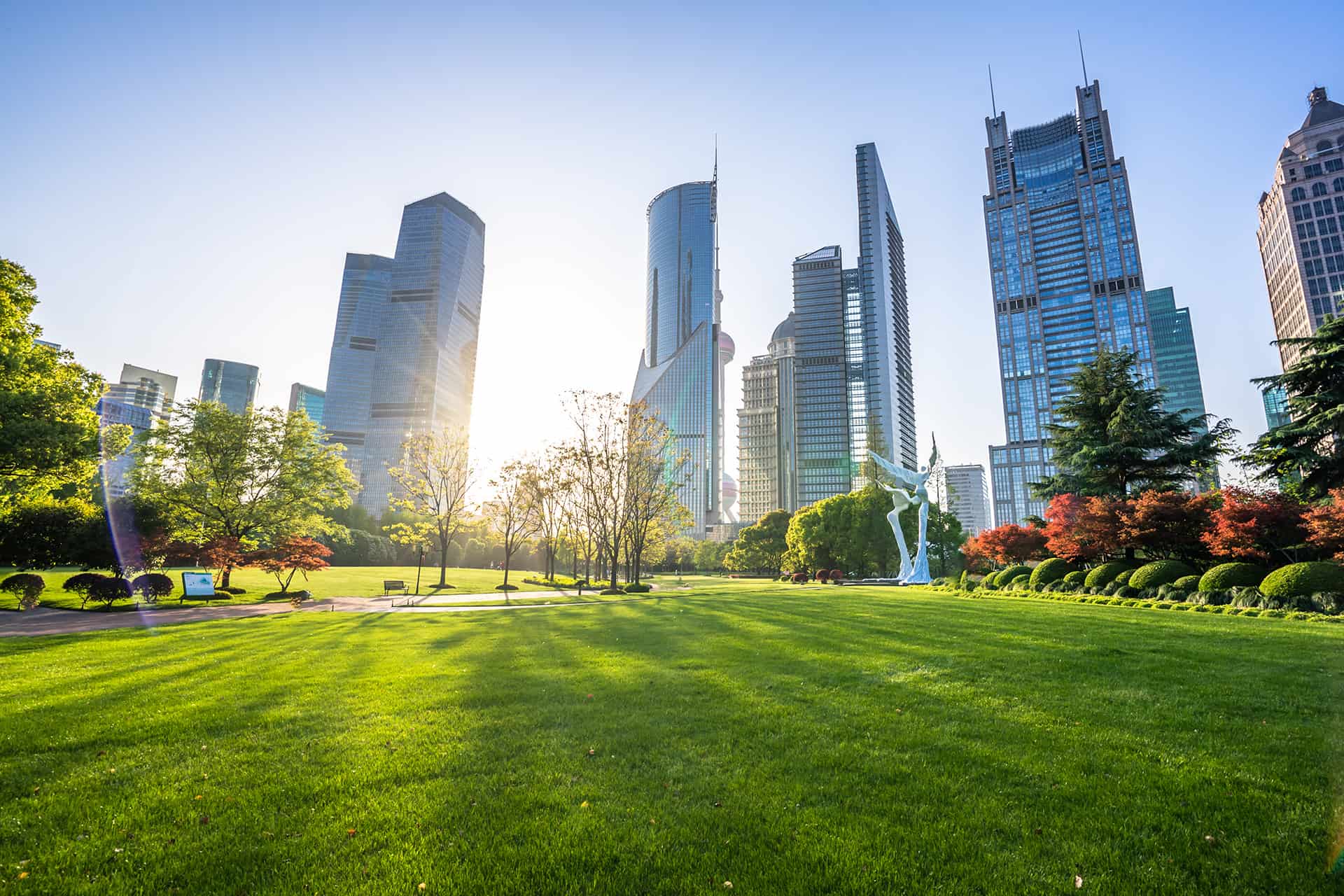 Of course, just because you'll be travelling to New York in the summer doesn't mean you'll only have access to summer activities, and there will always be opportunities to experience the Big Apple in more traditional ways. Here are some examples of things you can see and do in New York all year round, and even all summer long: