All useful information about the New York Marathon

Article written by Amélie on 3 May 2022
Category : News

The New York Marathon is held every year on the first Sunday of November.

Each year, around 50,000 participants from all over the world take part in this 42.195 km race through one of the world's largest cities.

If you want to come to New York and take part in or simply watch the New York Marathon, follow the guide! I will explain everything you need to know about the New York City Marathon.

The history of the New York Marathon

The very first New York City Marathon was held in 1970, with only 127 competitors at the starting line. At the time, the race was held only in Central Park, and the course consisted of loops around Park Drive. In 1976, due to the event’s growing success, the course was completely redesigned to run through all five boroughs of New York. The following year, following the success of the film Marathon Man, registrations increased tenfold.

5 decades later, there is no doubt that the New York Marathon has now become the most popular and prestigious annual marathon in the world, alongside the Paris, London and Berlin marathons. 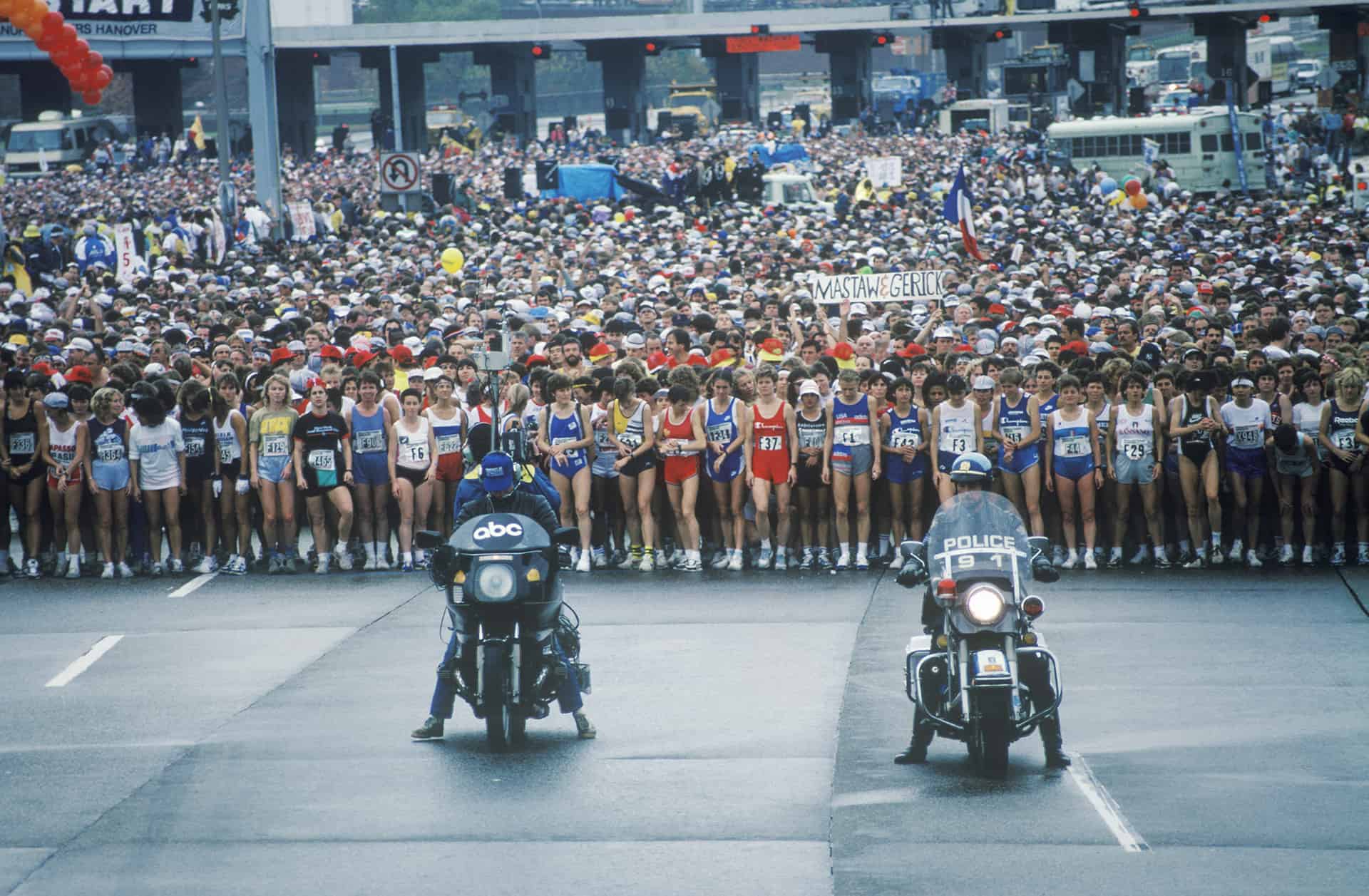 The starting line is near the Verrazano Narrows Bridge in Staten Island.

The bridge is of course closed to traffic for the occasion. The New York Marathon route then passes through the other four boroughs of New York: Brooklyn, Queens, the Bronx and Manhattan.

Unlike other major marathons such as Berlin or Chicago, the New York Marathon course is not known for its simplicity. While the first half of the course is on relatively flat ground, the second half is more challenging, especially when crossing several bridges (there are 5 in total) and for the finish in Central Park.

If you're planning to break the marathon world record, you'd better give it a try in Berlin.

Paraticipate in the New York Marathon

If you want to run the New York City Marathon, you'll need to start preparing well in advance.

Hundreds of thousands of people from all over the world want to run the marathon every year – but not all of them will be able to.

New York Road Runners, the running organisation that organises the marathon, uses a simple lottery principle. You can find the registration form on the official NYRR website.

As a general rule, registration opens on 15 January and closes on 15 February.

The draw is then revealed during the month of March.

In fact, 3 different draws are organised. The first is reserved for people living within a 90 km radius of New York, the second is for US residents, and the last one is for all other participants.

There are also some special cases where you can be almost certain to participate in the NYC Marathon.

Your participation will be validated if:

In practice, most competitors validate their participation with one of these 4 scenarios. On average, just under a quarter of participants are drawn through the lottery. This represents more than 15,000 people each year, while nearly 100,000 people participate in the lottery.

NYRR also applies quotas for each category in the draws. Only about 25% of the contestants drawn are not New Yorkers or US residents, which amounts to between 4,000 and 5,000 participants each year. 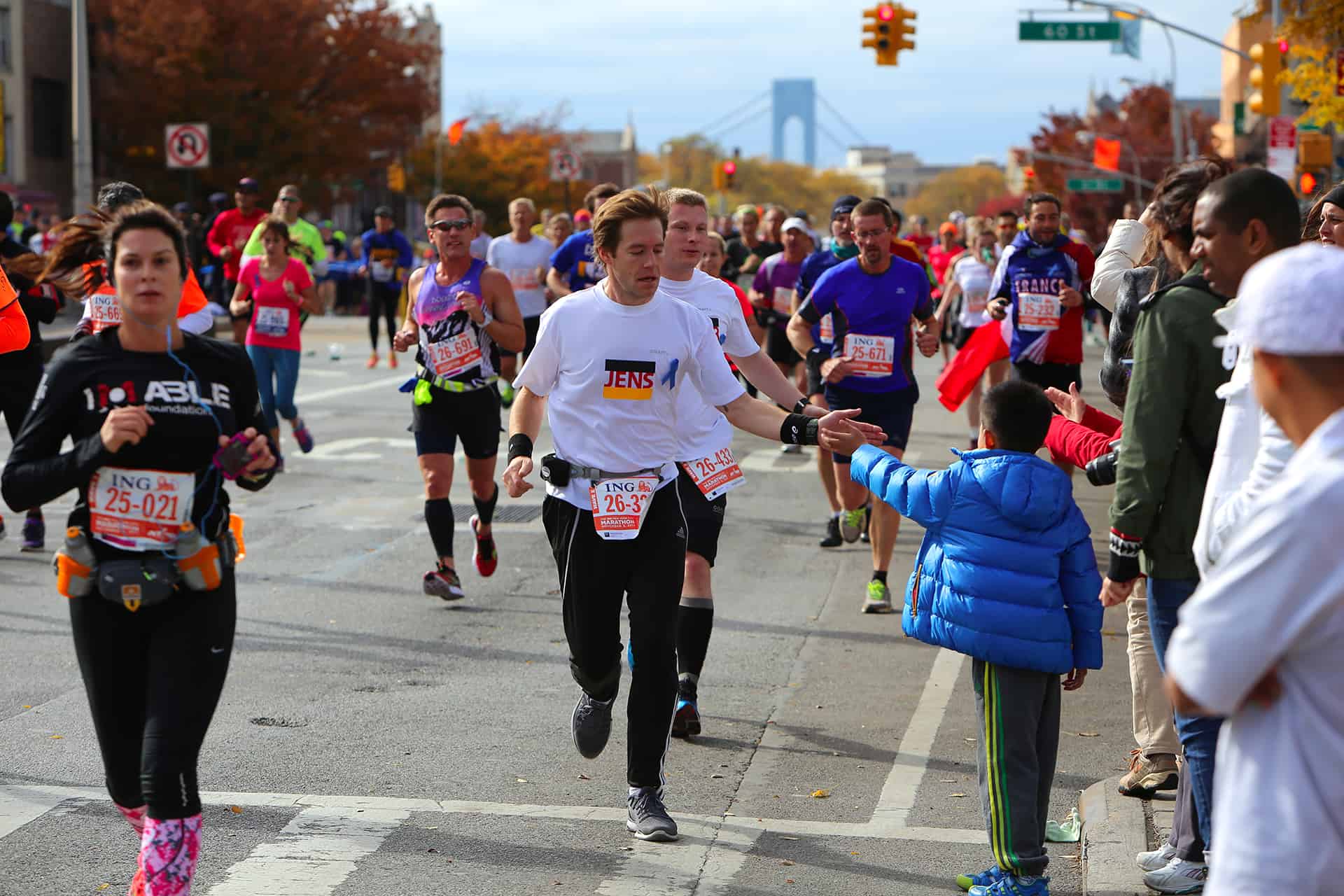 Until 2016, an $11 application fee was required, which could not be recouped if qualification was not achieved. Following a lawsuit alleging violation of New York State law, registration for the draw is now free.

This entry fee also includes official documentation and access to the shuttle bus to the start line. During the race, all participants will be taken care of by the medical teams if needed, and will be able to take advantage of the refreshment stations (drinks and food). The registration also entitles participants to an official T-shirt. The day before the event, it allows them to take part in a 30-minute run, before joining the traditional Pasta Party, where under a huge tent all participants are invited to come and fill up on slow sugars.

If you don't know what to do in New York during your stay and it's early November, you'll probably want to watch the marathon as a spectator.

Every year, around 2.5 million people attend the race. For the occasion, traffic in the city is largely disrupted. Public transport does not run normally, and not all areas are accessible, even for pedestrians. To really see the finish in Central Park, you will have no choice but to buy a ticket to sit in a stand.

If you want to see the runners along the route and be able to cheer them on, there are several strategic locations that are very interesting:

If you don't have the opportunity to travel to New York during the marathon period, you can watch the entire race from your couch on the official New York Marathon website or on NBC television. 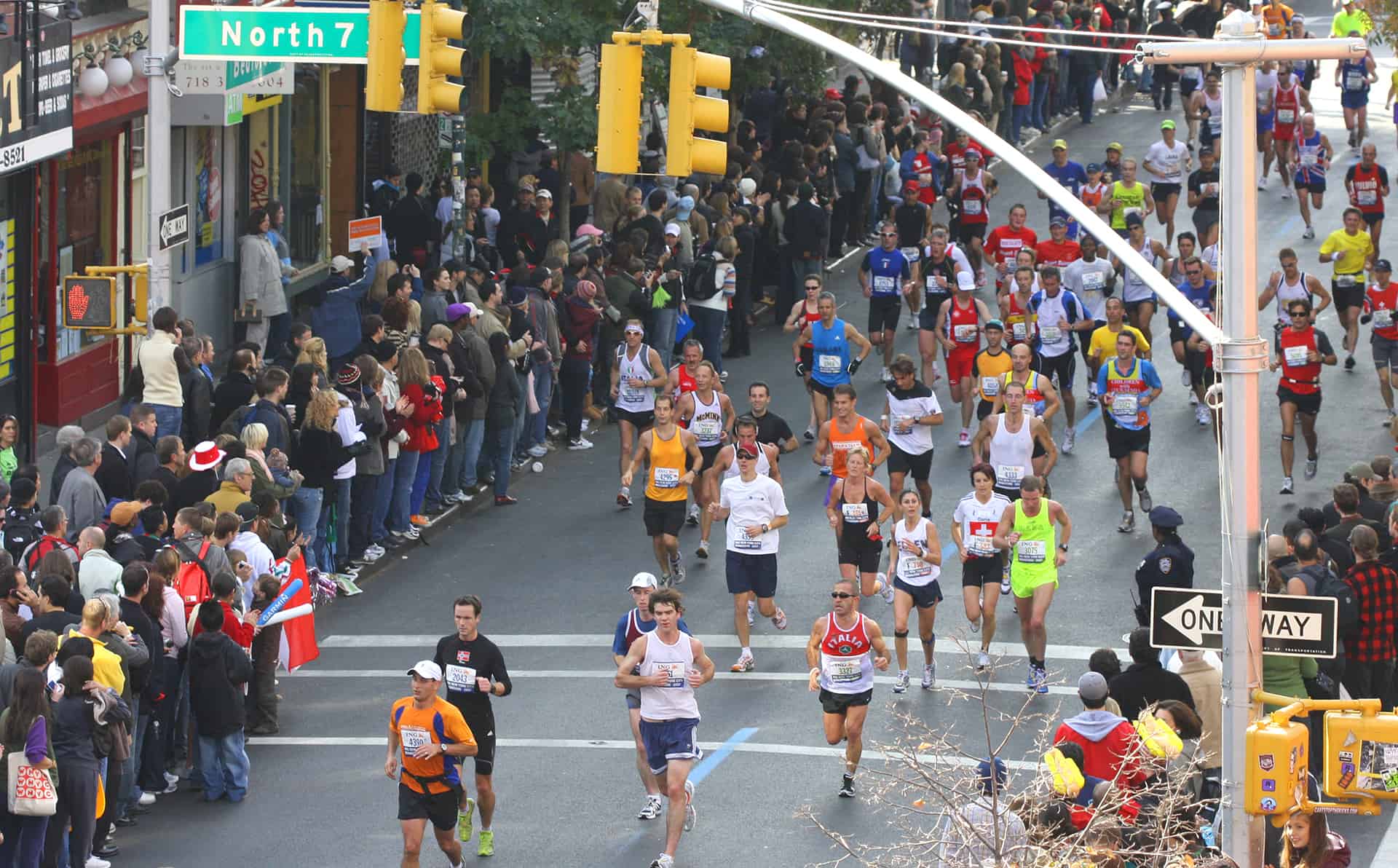 More about the New York Marathon

To finish, here are some figures and anecdotes about the world's biggest foot race:

And this concludes my article on the New York City Marathon! How about it? Fancy a small run? 👀

Jokes aside, if you happen to have participated in this Marathon, I for one would love to hear about it! Don't hesitate to share your experience in the comments. Who knows, it may serve as a heads up for me if I ever am selected in the future! 😉