Little Italy, or how to discover Italy while being in New York! This small neighbourhood in Manhattan has a rich history and a certain charm that you won't find anywhere else in New York.

A visit to this district of New York may be a little too short for your taste, but it will certainly be unforgettable. Why so?

Because as you wander through the streets, past the cafes, restaurants and grocery shops, you'll discover a unique Italian atmosphere and have a great time.

I'll tell you right now why Little Italy is a place you’ve got to visit, especially if you don't know what to do in New York yet! I will also give you my best addresses in this Italian district of Manhattan and describe the activities to do once there.

In the late 19th and early 20th centuries, it was home to a large population of Italian immigrants. More than 120,000 immigrants congregated in this part of Manhattan, and they even created sub-neighbourhoods according to their region of origin.

At that time, Little Italy was a much larger neighbourhood. But over time, the neighbouring district of Chinatown began to eat into it. In addition, most of the inhabitants left the neighbourhood in the 1950s, either to live in another Little Italy (located in the Bronx) or to move to other parts of New York (notably Brooklyn and Queens).

Unfortunately, Manhattan’s Italian district now only has a few streets that you will quickly walk around – especially as they have lost some of their former soul... But there are still some great discoveries to be made!

Especially if this is your first trip to New York.

You can take a guided tour that will allow you to discover the Little Italy district, but also the SoHo and Chinatown districts, which are nearby. You will be able to discover these different areas in record time, with a local guide. The price will be adjusted according to the number of people you are.

FOR MORE INFORMATION ON THE 3 DISTRICTS TOUR, CLICK HERE

To get a taste of the Italian atmosphere, go directly to the historic heart of the district, namely the main street: Mulberry Street.

Where is Little Italy located?

Little Italy, New York's Italian neighbourhood, is located in the northern borough of Manhattan, between Chinatown and SoHo.  It is divided into two areas: North Little Italy and Little Italy NoLita.

How to get to Little Italy?

The best way to get to Little Italy is by underground. You can use the:

You can also take the M103 bus to get to the district. 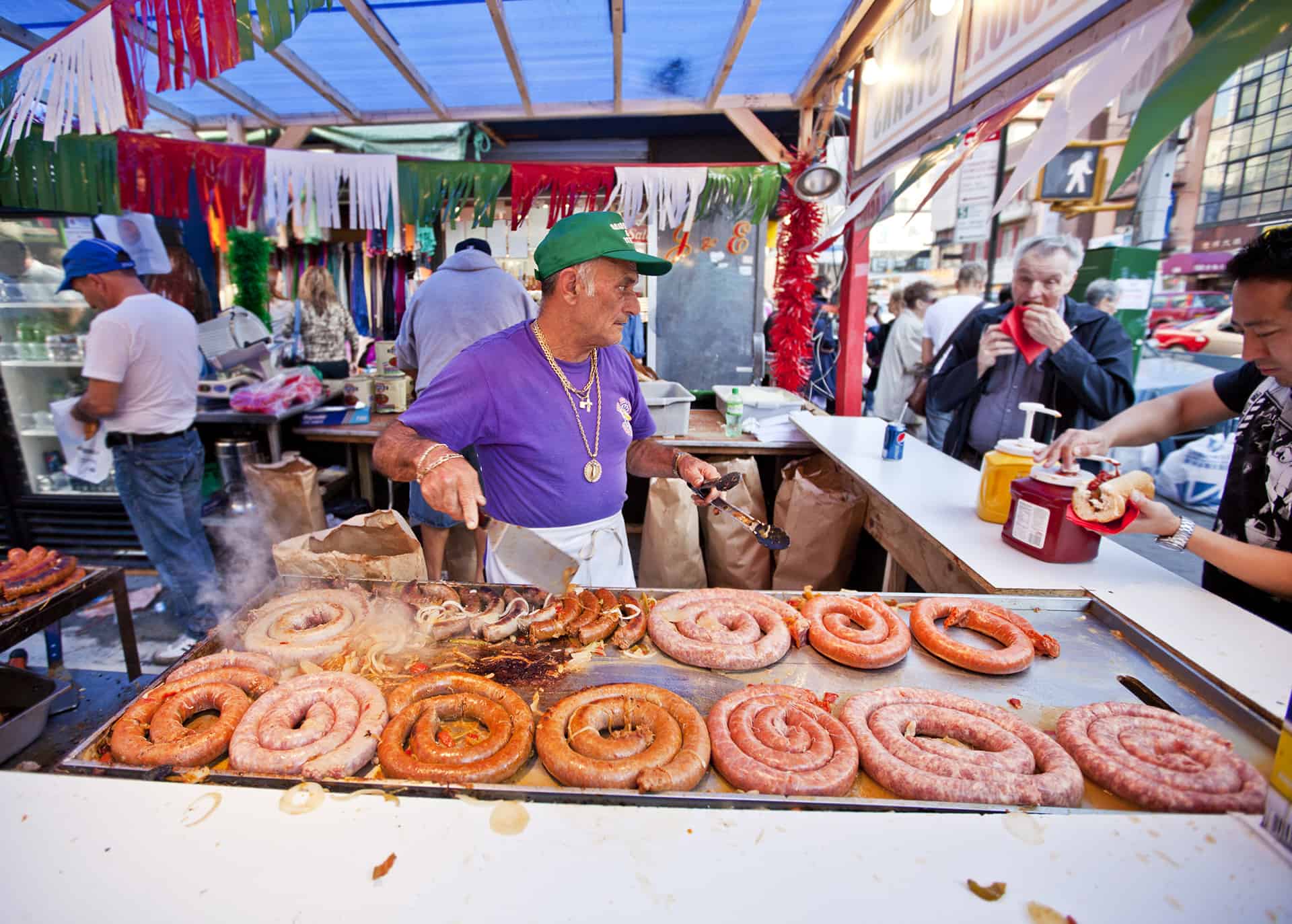 When is the best time to visit Little Italy?

One of the best times of the year to visit Little Italy is when the festival of "San Gennaro" (the patron saint and protector of Naples) is in full swing. The festivities take place every year in September and last 11 days.

Numerous religious processions, parades, games and competitions (mainly pasta eating) are organised, but the most important day is the 19th of September: it is the big parade of "San Gennaro", the one that announces the start of the festivities!

The municipality blocks the main street – Mulberry Street – to traffic and the statue of the saint, located in the Most Precious Blood Church, is carried through the neighbourhood.  Over a million people gather in Little Italy that day.

Where to eat in Little Italy?

The restaurants on Mulberry Street offer the best of Italian cuisine. Ideal for a culinary journey in a unique atmosphere!

Gastronomic tours are regularly organised, and will allow you to taste the delicious dishes while learning about the history and culture of this area with a local guide. He will of course bring you to the best addresses 😉

One of the most famous restaurants in the area is the "Umberto's Clam House" (129 Mulberry Street). It serves very good 100% Italian food, especially seafood specialities. Umberto's Clam House is open every day from 11 am to 1 am.

A little anecdote: one of the Italian mafia bosses, Joe Gallo, was murdered there in 1972 while eating a delicious fish!

I myself have already tried a few Italian restaurants and I recommend:

These three restaurants are TOP if you want to eat pastas or Italian specialities.

However, if you are looking for the best pizza in New York, Da Nico's (164 Mulberry Street) is the place to go.

The pizzas there are simply delicious and the setting is very pleasant.

Fancy an Italian ice cream? Go to Ferrara Bakery & Cafe (195 Grand Street). Founded in 1892, it is one of the oldest espresso cafes in New York. There, you will also enjoy Italian biscuits, cheesecakes and an excellent tiramisu.

It is open from 9 am to 11 pm (until midnight on Fridays and Saturdays).

What to see in Little Italy?

Once in Little Italy, you will quickly realise that this neighbourhood has a typical architecture, with 5 or 6 storey buildings. However, some buildings in particular should really be on your must-see list.

Following a fire in 1866, it was restored and reopened two years later. Today, it is a multi-ethnic parish where masses are celebrated in English, Spanish and even Chinese (Chinatowners like to go there)!

The Puck Building (295-309 Lafayette Street) is a Romanesque Revival building that was built in 1885 and expanded in 1893. It is famous for the gilded figures on its facade depicting Shakespeare's character Puck. The building was once the headquarters of the magazine "Puck". Today it houses offices, the sociology faculty of New York University and ballrooms.

The Romanesque Revival building of the Bowery Savings Bank (130 Bowery), one of New York's oldest banks, is also worth a look for its art-deco ornamentation and grand arched entrance. 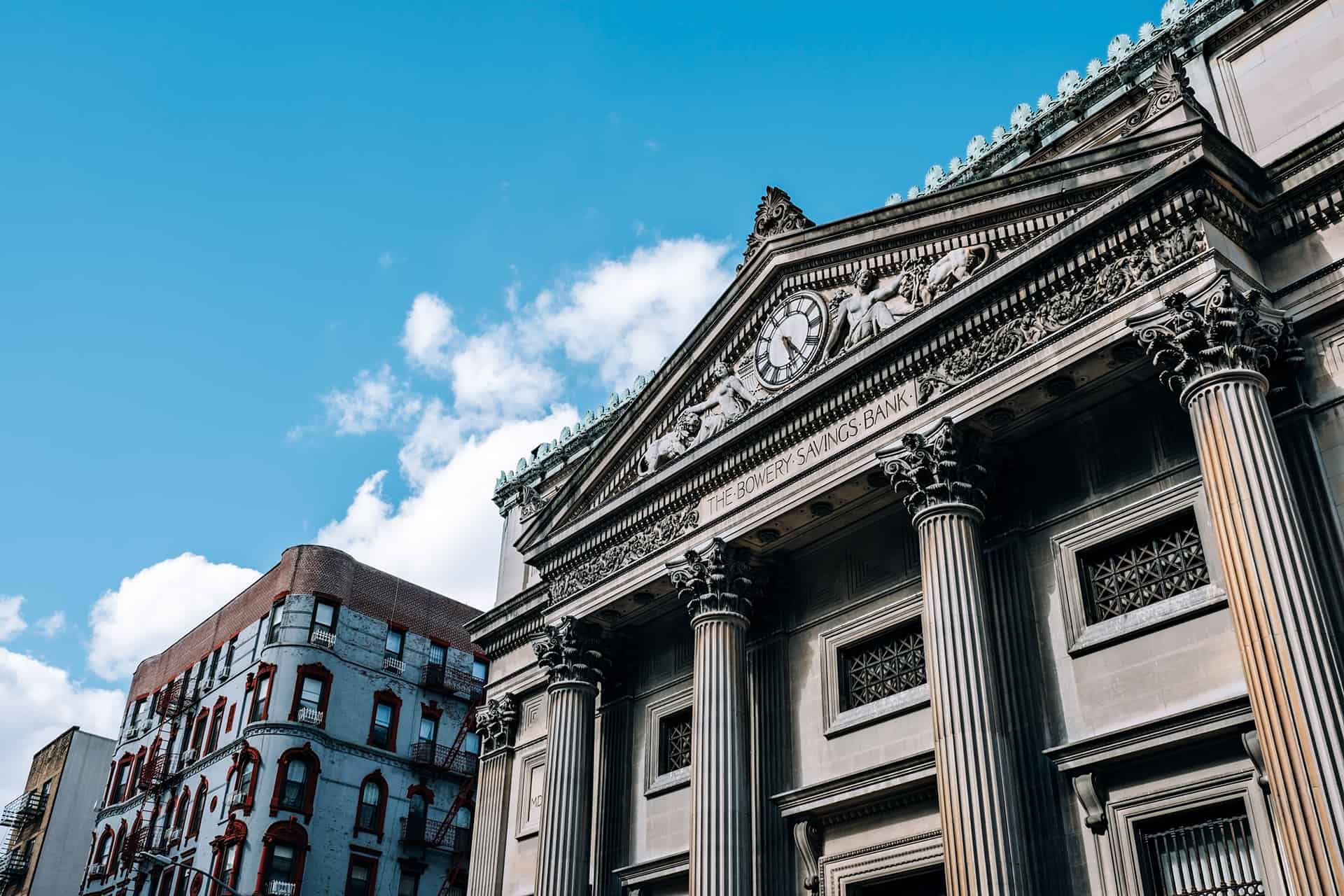 Also take a picture of the lovely dome and columns at the entrance to the Former Police Headquarters Building (240 Centre Street). This building housed the former NYPD headquarters from 1909 to 1973 – though these headquarters have now been replaced by luxury flats. Today, the NYPD headquarters is located at 1 Police Plaza in Manhattan, right next to New York City Hall.

The Former Police Headquarters Building is a New York City landmark and is listed on the National Register of Historic Places.

Finally, don't forget to visit the Mulberry Street Bar (176 Mulberry Street). This is THE bar to visit in Little Italy, as it has been the setting for several movies (including Godfather 3 and Donnie Brasco) and TV shows (The Sopranos). But that doesn't mean you can't enjoy its delicious pizzas while listening to Italian music, of course!

In Little Italy, you can also go shopping and enter the numerous grocery shops to buy good Italian products such as pasta or olive oil....

By the way, don't forget to visit Cocoblues, a rather unusual souvenir shop with very affordable items (178 Hester Street).

New York's old Italian neighbourhood is also worth a visit for the graffiti on its walls. Indeed, for some years now, Little Italy has become a very popular place for street art artists... To the point of becoming a real open-air gallery!

Among the most famous murals, check out the largest representation of the Statue of Liberty in New York by Tristan Eaton (2013). You will find it on Mulberry Street, more precisely on one of the facades of the café "Cha Cha's".

A few steps away, you will see the portrait of the actress Audrey Hepburn, another work by Tristan Easton done in the same year.

You can also go admire the huge tiger by Sonny Sundancer (2017).

LITTLE ITALY IN THE BRONX 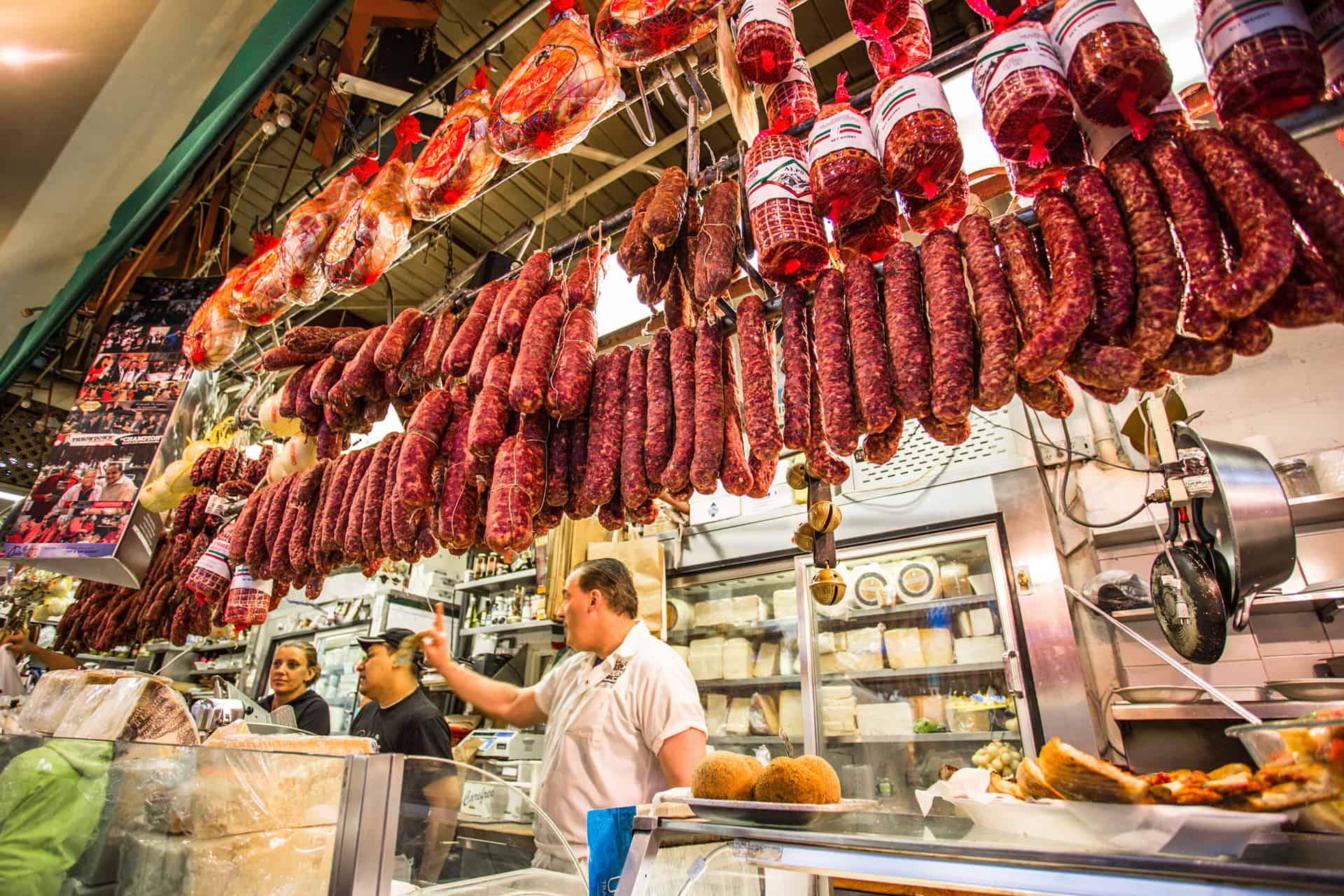 Many New Yorkers consider that the "real" Italian part of New York is in the Bronx. According to them, the atmosphere is more authentic there. You will find many more typical Italian shops as well as very good grocery shops. You will also be able to enjoy it at your leisure as there are very few tourists.

Note that Little Italy in the Bronx is organised around two main avenues: Arthur Avenue and East 187th Street.

How to get there? Take the D line of the New York Subway and get off at the Fordham Road station. You will then only have to walk for about 15 minutes before arriving in the Italian Quarter. You'll know you've arrived as soon as you see the Italian flag painted on the pavement😉

And that’s it for this article. I hope I gave you all the info you were looking for, and that you’ll have a great time in this truly unique neighbourhood of New York!