There exist Chinese districts in many major cities around the world, and Chinatown in New York is one of the most famous of them all. In this district located in the south of Manhattan, you can discover new atmospheres and colours, and enjoy a total change of scenery during your visit.

In this post, I'll tell you a little bit about the history of this atypical New York district, and explain all you can see and do during your visit to Chinatown.

The history of Chinatown

In the first half of the 17th century, shortly after the discovery of Manhattan, the first settlers began to move to the island. At that time, there were very few people of Chinese origin in the area.

Immigrants, attracted by the gold rush, had preferred to move to the East Coast instead.

From the second half of the 18th century, many more Chinese immigrants arrived in America.

Most of them were sailors or railway workers.

A century later, from 1850 onwards, when the railway network was already well developed, the need for workers rapidly declined and Chinese workers moved closer to the big cities, where most of them became traders.

Because racism and segregation were so prevalent in the United States at the time, Chinese immigrants preferred to congregate and, in so doing, created large communities. This is how New York's Chinatown began to form. 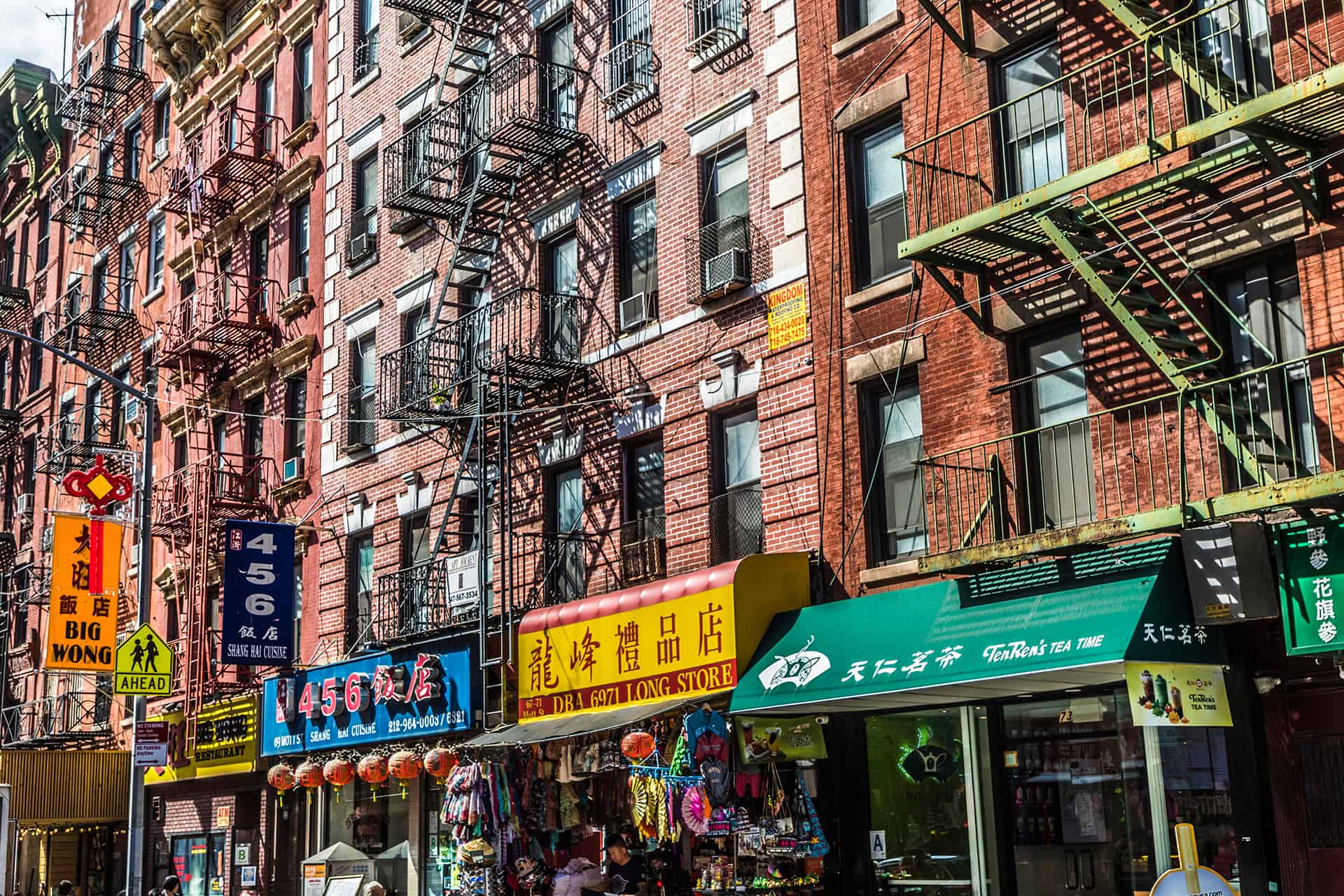 Up until the mid-twentieth century, there was a law in the United States that prohibited the immigration of workers from China. In order to protect themselves from discrimination, people from China were forced to organise themselves, which further strengthened the community aspect of Chinatown. After the ban was lifted in 1943 and immigration quotas were lifted in 1968, the number of Chinese immigrants rose sharply, and Chinatown quickly became a city within the city. The district even expanded to the point where it partially replaced Little Italy, the Italian district to the north. Other Chinatowns also formed in New York, notably in Brooklyn and Queens.

Today, about 700,000 Chinese live in New York. Chinatown is truly a unique neighbourhood in Manhattan, and an almost obligatory stop on a trip to New York. By the time you get to know the place, you'll feel like you've been transported directly to Asia. If you don't know yet what to do in New York during your stay, I strongly recommend adding a visit to the Chinatown district to your list of things to do! 🙂

Discover 3 districts in one tour 🏙️

I recommend booking a guided tour with a local guide who will take you through the fascinating stories of Chinatown, SoHo and Little Italy, all in one tour. The main advantage of this type of tour is that it is short (about 2 hours) and will allow you to see a lot of things so that you can narrow down what you want to see more of by yourself, once the tour ends.

Of course, you can also choose to simply move on to another of the many activities the city offers! 🙂

In 2 hours, you will have seen the essence of these three districts. All that’ll be left will be to choose an establishment to eat in. And there is no shortage of choice in these areas! (Your guide will be able to share with you his best recommendations, according to your desires).

MORE INFORMATION ON THE GUIDED TOUR BY CLICKING HERE

How to get to Chinatown? 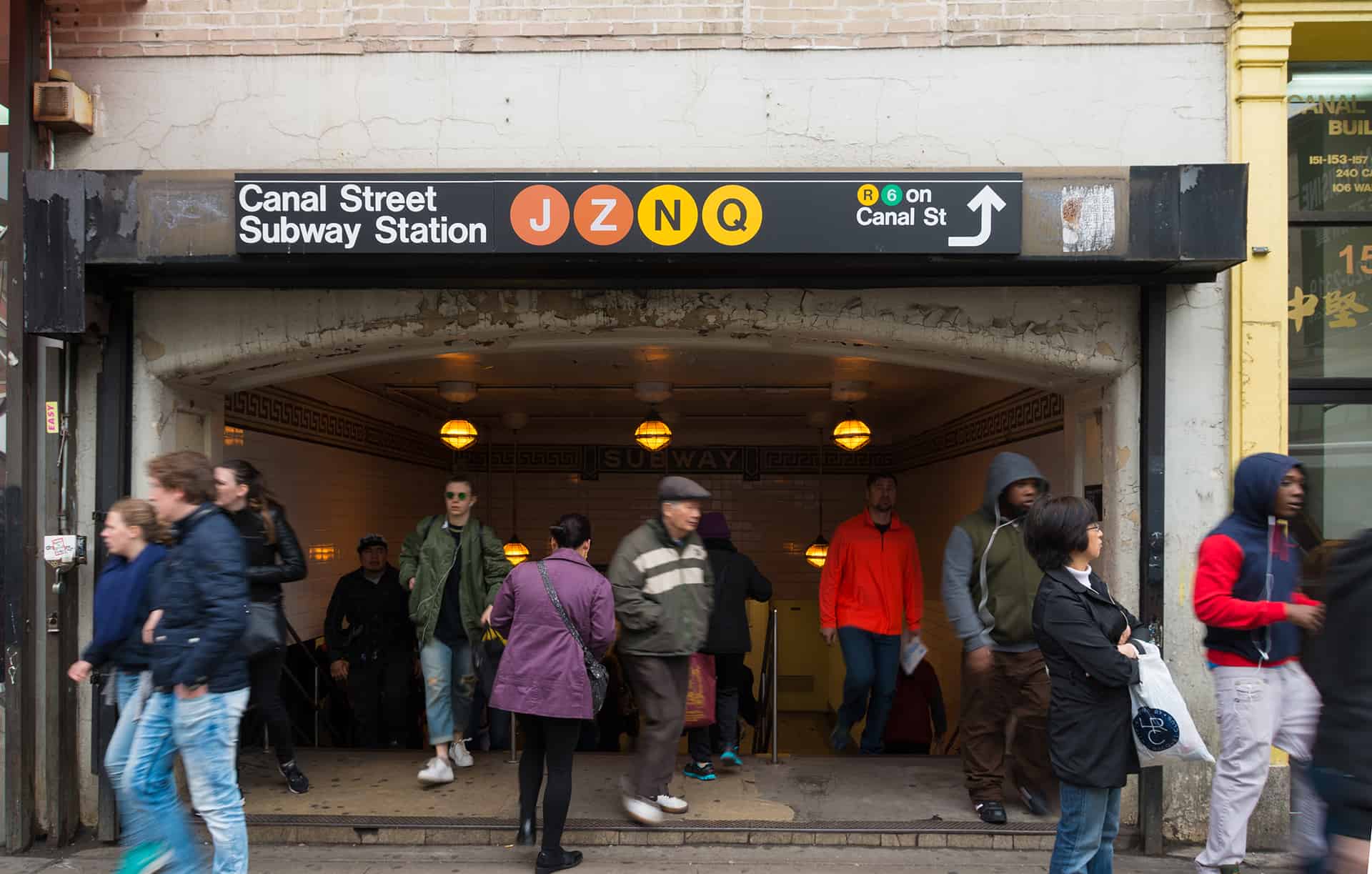 Chinatown is located on the Lower East Side, south of Manhattan and north of the Brooklyn Bridge.

The district is bounded on the west by Broadway and on the east by Essex Street.

To reach Chinatown with the New York City Subway, you must get off at Canal Street Station.

This way, you will arrive directly in the heart of Chinatown. To reach this station, you can take the 6, J, M, N, Q, R, W and Z underground lines. If you take the F line, you can also get off at the East Broadway station, situated just on the eastern edge of Chinatown.

You can discover Chinatown at your own pace, or you can opt for a private or group guided tour. Discovering this area with a guide will allow you to learn a lot more about its history, but also about its current situation. These organised tours will take you to the main sites of interest and give you the opportunity to taste some Asian culinary specialities. As I said before, some tours will even take you to other areas besides Chinatown, such as Little Italy and Soho.

These tours are a great way to see a lot in just a few hours.

TO FIND OUT MORE ABOUT THE TOURS, CLICK HERE

If you would rather discover Chinatown on your own, I will now introduce the most interesting places you can visit. 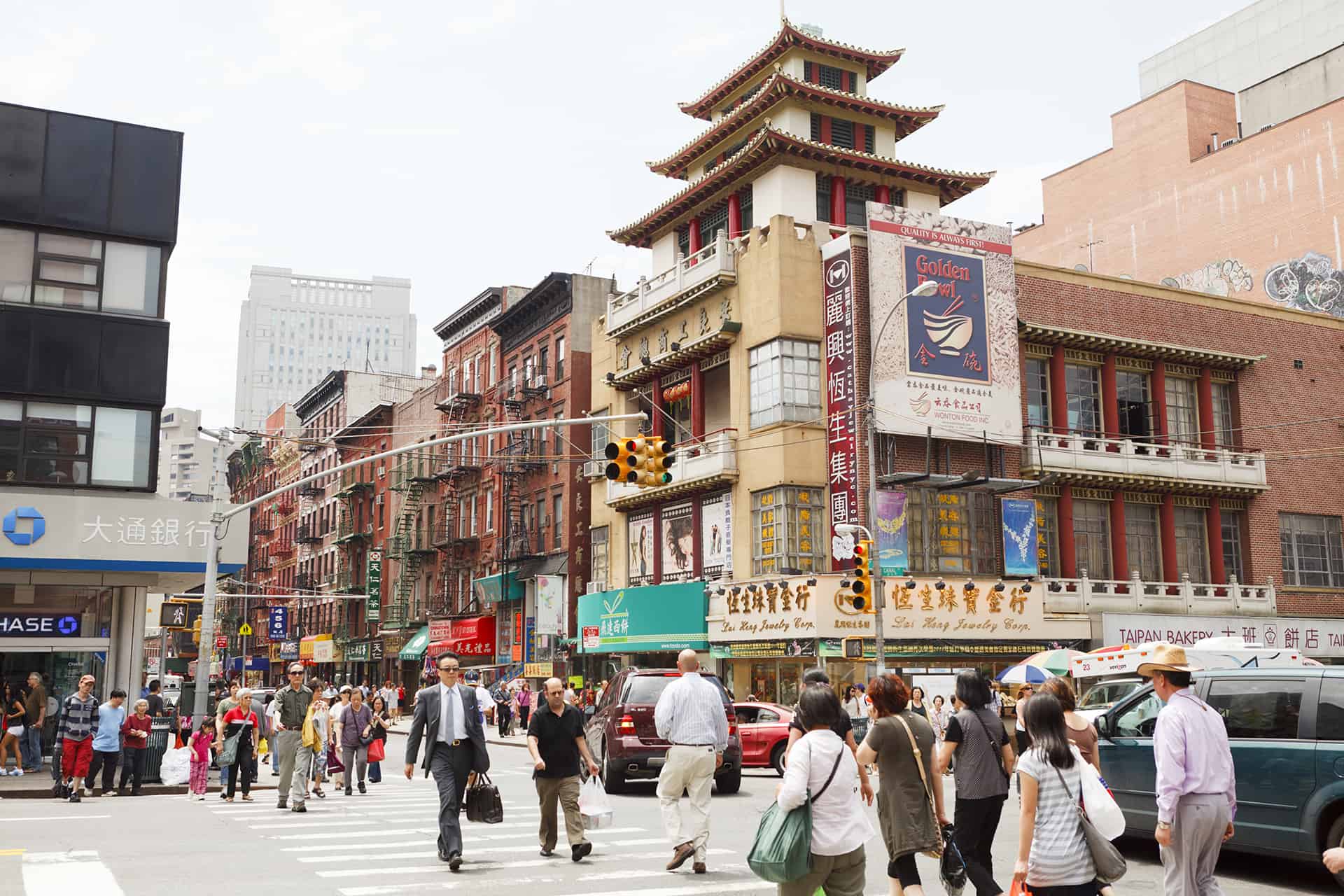 If you arrive by underground, you will probably enter Chinatown from the station located on this street. Canal Street is the main street in the district. This very wide avenue, which also passes through Little Italy and other districts, is far from being the most typical in Chinatown, but already most of the shop signs are written exclusively in Chinese, and you will quickly become immersed in the unique atmosphere.

There are a few shops selling local products as well as a number of restaurants. Canal Street is known for its New York souvenir shops, as well as for its hawkers, who sell many imitations of luxury goods. Some of the counterfeits can be very well made and their very attractive prices might tempt you. However, I strongly advise you not to fall for them, as it is strictly forbidden to bring this type of product through customs, and you would be exposed to a large fine. 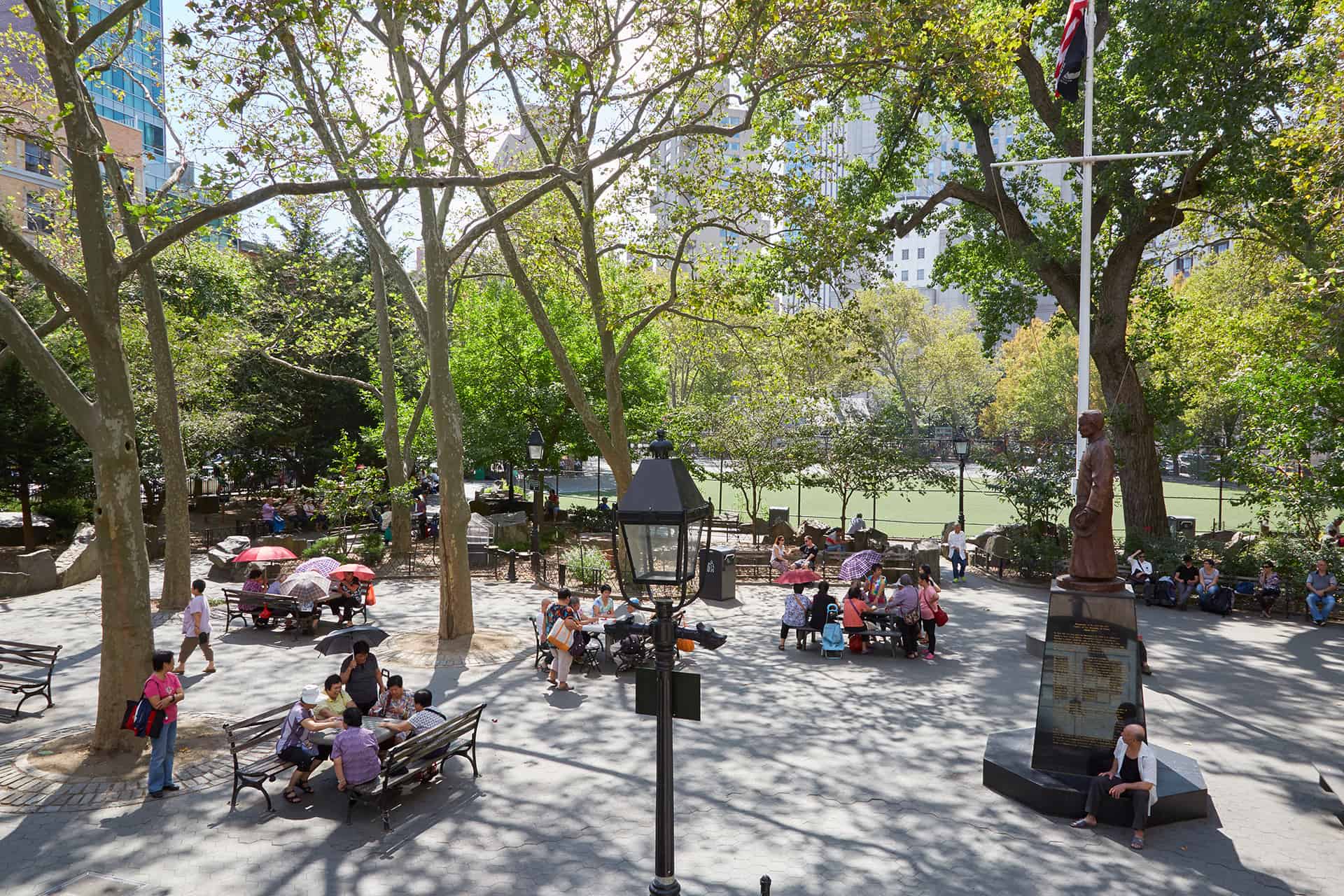 Columbus Park is Chinatown’s only green space. It is also one of the oldest parks in New York. Here too, the change of scenery is guaranteed! Indeed, you will be able to take a beautiful walk while admiring beautiful Asian gardens.

This park is a real haven of peace, where you can enjoy a very soothing atmosphere. It is here that locals come to play cards, chess, or practise Tai-chi or Kung fu. You may also come across musicians playing some traditional Chinese instruments, and even fortune tellers. 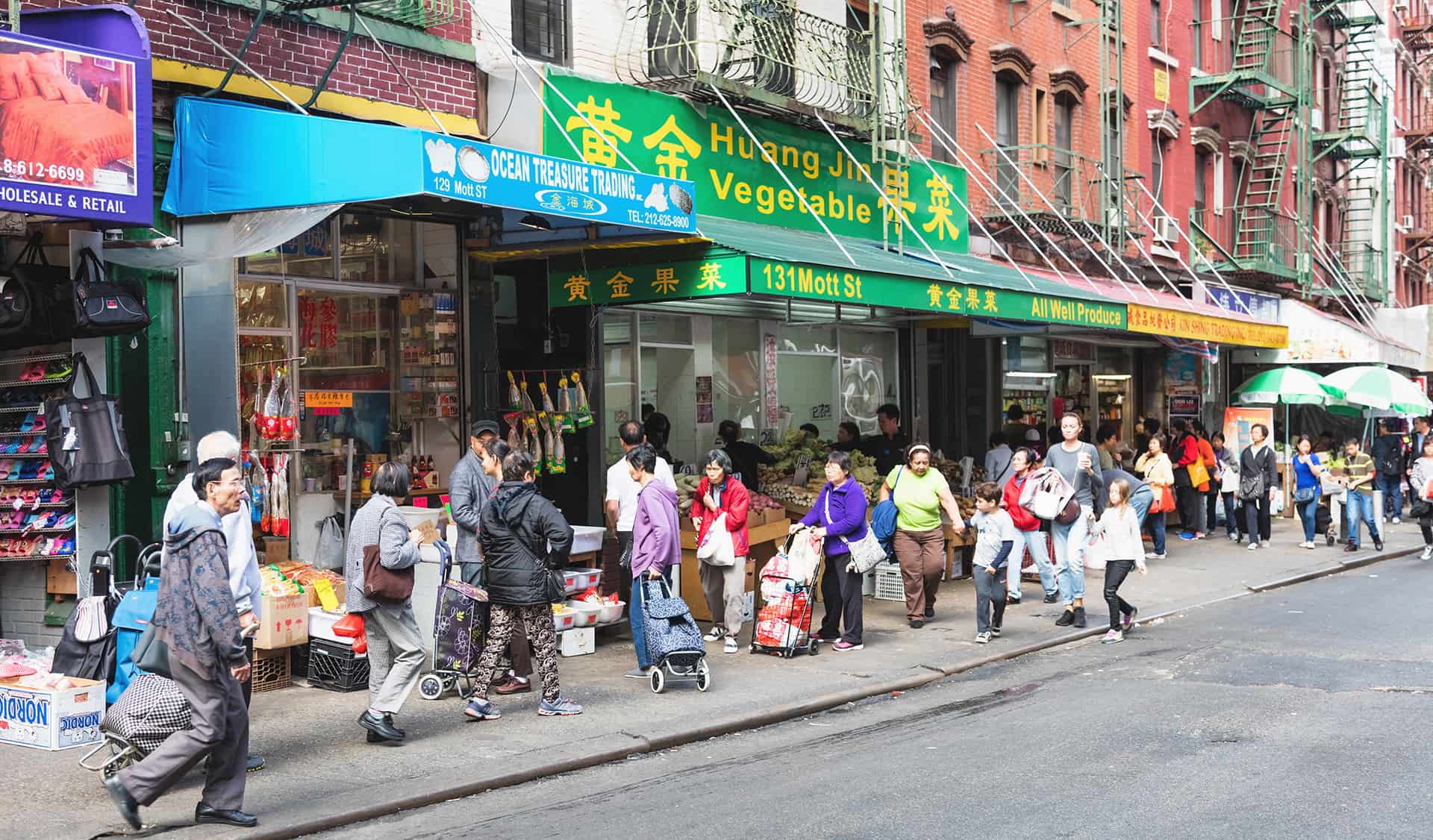 Mott Street is one of the most commercial streets in Chinatown. If you've walked down Canal Street to this street, just by entering it and heading south, you'll really feel like you've taken an instant trip to China. Here, you'll have to keep your eyes peeled for any clue that you're still in New York. On this street you will find many restaurants, food shops, and souvenir shops.

Even further south, you will come to a more labyrinthine area of Chinatown, made up of small alleys, such as Pell Street and Doyer Street. These are some of the most charming and authentic alleys in all of Chinatown, and it is there that you will find the district’s oldest buildings.

The Mahayana Buddhist Temple is the largest Buddhist temple in New York. It is located right at the foot of the Manhattan Bridge, and is easily recognizable by its large facade which represents a Chinese pagoda.

You can go there to meditate or simply to visit. If you do, you will discover a huge golden Buddha statue, placed at the very back of the building. For $1, you can also draw a small paper that will predict your future. For the record, before becoming a temple in 1996, this building housed a cinema for adults. 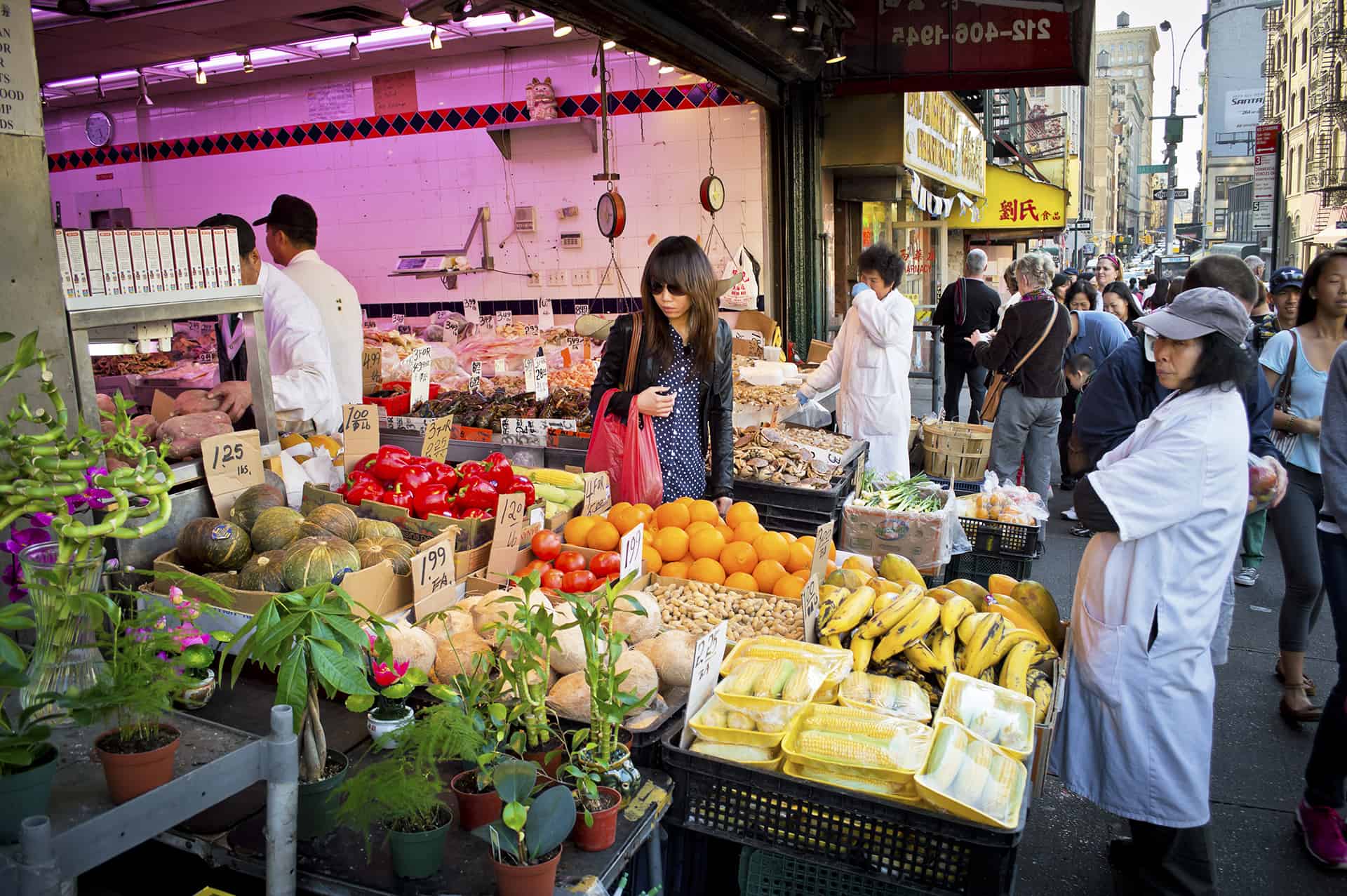 In the streets of Chinatown, you will see many shops dedicated to Asian food. If you are in Chinatown on a Sunday, you can even visit the Chinatown Market, one of the most popular attractions in the area.

Supermarkets such as Hong Kong Supermarket offer a wealth of Asian delicacies, and you'll be spoilt for choice if you want to take home some edible souvenirs from your visit.

For an original souvenir, you can visit Yunhong Chopsticks, a shop that specialises in Chinese chopsticks. There are hundreds of different models to choose from.

If you are looking for a gift but don't have a specific idea, you can find all kinds of items at Ting Yu Hong Co, on Doyers Street, and at very affordable prices besides. This little shop is the oldest souvenir shop in Chinatown. It is definitely a place I recommend if you want to find original gifts, as all the other shops tend to be a bit too similar.

It's also important to note that many of the small shops in Chinatown don't accept credit cards, so you'll need to bring cash.