If you want to see a great musical during your stay in New York but are not necessarily interested in the classic Broadway musicals – then STOMP is the show to see.

the history of STOMP 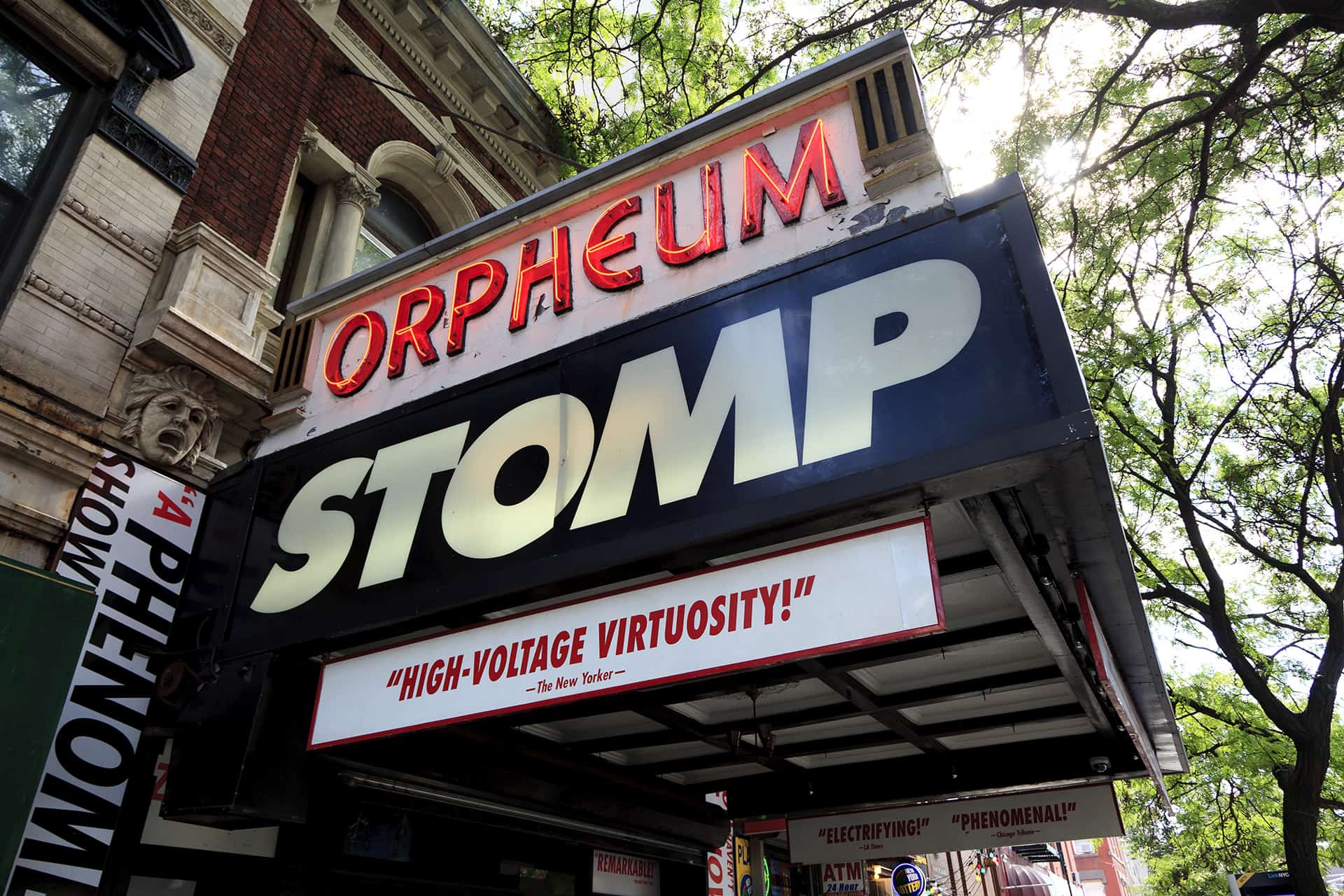 The STOMP troupe was created in 1991 in Brighton, England. It is composed of 8 artists who have the particularity of making music using only percussion instruments such as drums, tambours or tam-tams. But STOMP's originality goes even further, as many other everyday objects such as barrels, bins, pots, pans or brooms are used to create wild rhythms and choreographies.

STOMP has been performed at the Orpheum Theatre in New York since 1994. The show quickly became a hit with audiences and won numerous awards. In its first year in New York, the show won the Drama Desk Award for the most original theatrical experience. In all those years, its success has never waned, and STOMP is now a classic and one of the most popular musicals in New York.

Unlike classic musicals, STOMP does not really tell a story. Rather, it is a street show that was adapted for the stage – unlike any other show you will see on Broadway.

The musicians deploy all their talent to create rhythmic melodies, and interact with the audience with great humour.

Because of its authenticity and uniqueness, the musical is in great demand by audiences and tourists alike. The shows are usually sold out 1 to 2 weeks before their performance. I can therefore only recommend that you take your tickets as soon as possible to be sure to attend the show on the date you want.

This musical will really let you see something different from the classics like Aladdin or The Lion King 🙂 I am sure you will like it!

SEE AVAILABILITY FOR YOUR DATES BY CLICKING HERE

STOMP is an "Off-Broadway" show, which means that although it is played in New York, representations are held in a small, more intimate theatre – unlike most of the big musicals in the city. The Orpheum Theatre is a small venue with only about 300 seats, located in Manhattan's East Village. Off-Broadway shows are much more free to break away from the classic codes of Broadway musicals, so they are often particularly original shows.

As I mentioned earlier, this show does not really tell a story. One of the things that sets STOMP apart from virtually all other New York musicals is that there is simply no dialogue. STOMP focuses on percussion and dance, so even non-English speakers will have no trouble following the flow of the show.

Having said all this, can STOMP really be considered a musical? Well, yes, because the artists go far beyond a simple musical performance. In a true burst of energy, they choreograph and act, making themselves perfectly understood through their mimicry, and succeed in drawing the audience into their world for the duration of the performance.

STOMP is a show for the general public and is suitable for the whole family. The show lasts about 1 hour 45 minutes. The show has been a great success since its very beginnings, in 1994, not least because of the crazy energy of the artists on stage. If you want to see a fast-paced, dynamic show, STOMP is the musical you must see during your stay in New York.

STOMP is without a doubt one of the best alternatives you can get if you want to see a musical  that stands out from the great classic Broadway musicals. What struck me most after seeing STOMP was the skill of the musicians, who must have worked tirelessly to achieve such a high quality and intense performance, using such a wide variety of original instruments.

STOMP is a world-famous musical, of which you've probably seen at least one excerpt on television. If you were already impressed by these acts, I assure you that seeing the show live at the Orpheum Theatre is a whole new experience.

The atmosphere is amazing, with each of the performers putting on a real performance during each show. The Orpheum Theatre is a small, beautiful Beaux-Arts style theatre that is well worth a visit and has exceptional acoustics.

Ticket prices to attend the show

STOMP is not playing directly on Broadway, so prices are much more affordable. You can easily put the show on your agenda when you visit New York. However, the venue is also smaller, with only 299 seats precisely. STOMP is one of the most popular musicals in the city, so it will always be necessary to book your ticket if you want to make sure you can attend a performance while in New York.

Ticket prices vary depending on the location you choose:

As far as the view is concerned, you can enjoy the show comfortably from any seat in the Orpheum Theatre. The only problem with the balcony seats is that the aisles are too narrow for tall people to sit comfortably.

Tickets for the Premium Orchestra Zone will allow you to see the show close to the stage. The closest seats are not always the best, but in the case of STOMP, you will be able to experience the full intensity of the musicians' performance even better.

Buy your tickets for the Broadway musical

STOMP sells out almost every night. Buying your tickets online before you leave is the only way to ensure you'll get a seat and not have to pay extra to see the show.

If you prefer to try your luck once in New York, you can visit one of the TKTS booths in the city (the best known of them being located in Times Square). If you're lucky, you'll be able to find tickets for 20-50% less in these shops, for shows on the same night or the next day.

However, you'll have to wait in line, and it's ultimately quite unlikely that tickets will be available for a show as popular as STOMP. As such, booking your tickets will always be the best thing to do to make sure you get to see the show.

You've reached the end of this article on the Stomp show! I hope you enjoyed it and that I was able to help you in any way 😊