The Lion King, is without a doubt one of Walt Disney's greatest classics. This cartoon, released in 1994, was adapted 3 years later into a Broadway musical. For more than two decades now, The Lion King has been one of the most popular musicals, and probably the most famous on Broadway.

If you want to take advantage of your stay in New York to discover this mythical show, you will find in this post everything you need to know to get your ticket at the best price and enjoy the Lion King on Broadway.

The History of the musical The Lion KIng 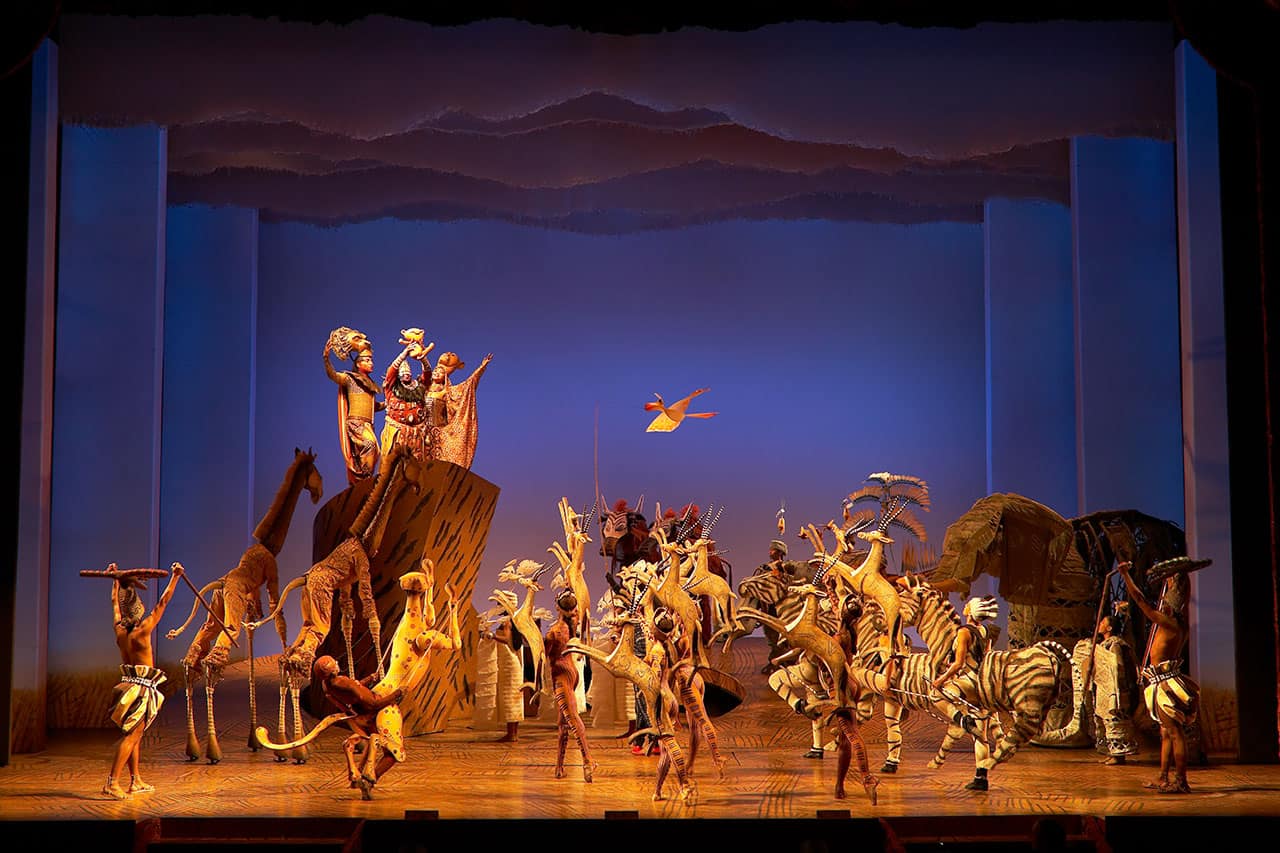 The Lion King's story is largely based on the story of the animated film released in theatres in 1994. This is good news for people who do not speak English very well, for they will still be able to enjoy the show and appreciate the numerous songs.

The Lion King tells the story of Simba, a young lion who is to succeed his father Mufasa, the King of the Pride Lands. But the terrible Scar, Mufasa's brother, plots to take the throne. He succeeds in getting rid of the king while making Simba believe that he is responsible for his father's death.

Full of remorse, Simba runs away from his kingdom, and will live a great initiatory adventure during which he will meet Timon and Pumba, a meerkat and a warthog who will become his closest friends.

THE LION KING IN NEW YORK: A MUSICAL FOR THE WHOLE FAMILY 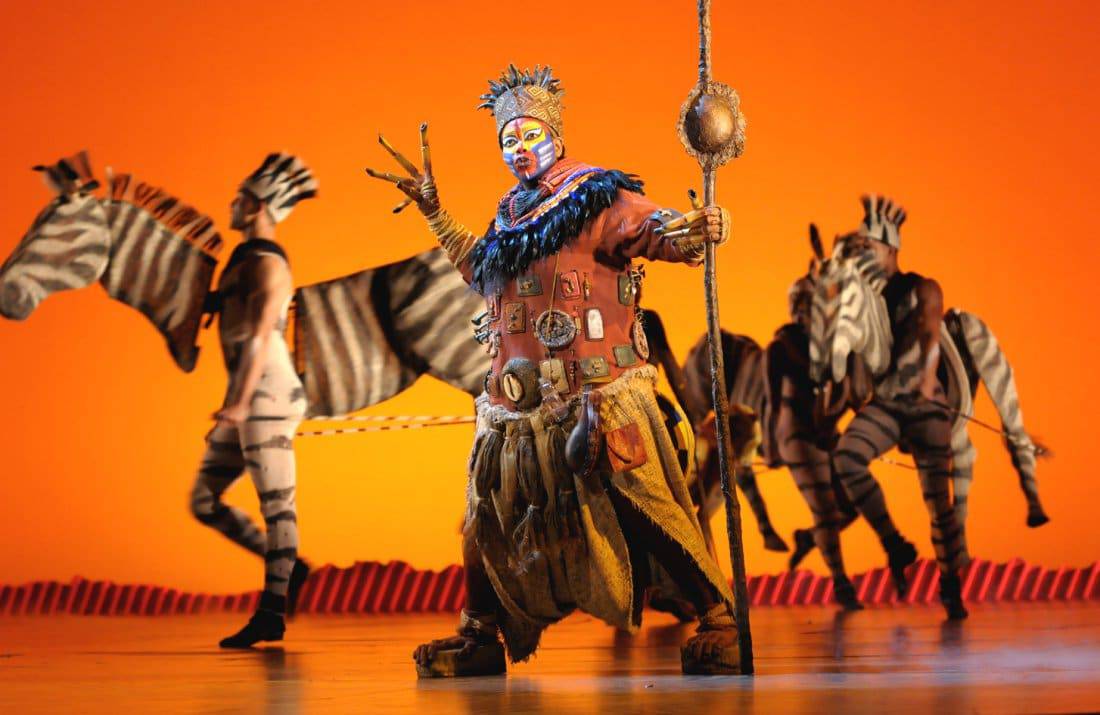 The Lion King, written by Roger Allers and Irene Mecchi, played for the first time at the Orpheum Theatre in Minneapolis for a few months before making its Broadway premiere at the New Amsterdam Theatre on 13 November, 1997.

The musical, with music by Elton John and lyrics by Tim Rice, was a huge success from the very start. In 1997, it received 11 Tony Award nominations, including nominations for Best Director and Best Musical.

Since then, the show has changed theatres several times and has even been adapted in several cities around the world, including Shanghai, Toronto, Tokyo, London and Paris. But it is still on Broadway, at the Minskoff Theatre, that one can attend the most beautiful performances of this musical that has become a legend.

The unique staging of this huge show will give you an experience you won't soon forget. All the animals of the savannah are represented as life-size puppets and come to life in splendid settings.

The costumes of the dancers and singers are each more beautiful than the last. During the show, you can hear all the iconic songs from the cartoon, such as Hakuna Matata, Can you Feel The Love Tonight and Circle of Life

For me, this is one of the best Broadway musicals you can ever see 🙂.

As a second option I also recommend the excellent show Aladdin, on Broadway as well.

Best seats for the Lion King on Broadway

The Lion King musical is playing at the Minskoff Theatre, which is located on Broadway, 200W 45th St. The show lasts 2 hours and 45 minutes, and the minimum age to attend is 4 years.

In this beautiful theatre, you will always be well seated, but if you really want to be perfectly placed, I advise you to avoid the seats on the sides of the orchestra. It is from these places, especially if you are very far away, that you will have the most difficulty to enjoy the whole stage.

Seating is available at different prices depending on the area you choose. The best seats are probably the ones on the mezzaninelevel, since they will give you a great view of the stage, while paying less for your ticket than a seat in another location.

If you want the best seat without worrying about the price, then you’ll get to enjoy the experience best by choosing a ticket for the centre of the orchestra.

Tickets prices to see the Lion King on Broadway

Because The Lion King is still one of the most popular Broadway musicals today, the show is often sold out, and ticket prices are quite high:

SEE AVAILABILITY AND RATES FOR YOUR DATES BY CLICKING HERE

How to book your tickets ?

These prices are indicative and may vary. During very busy periods, the show may sell out months in advance, and prices tend to increase.

If you really want to be able to see The Lion King while in New York City, I suggest that you go ahead and book your ticket before you even leave for New York. As a rule of thumb, you can buy your ticket up to 5 months before the show date, so you can be sure to have a seat on the date of your choice. 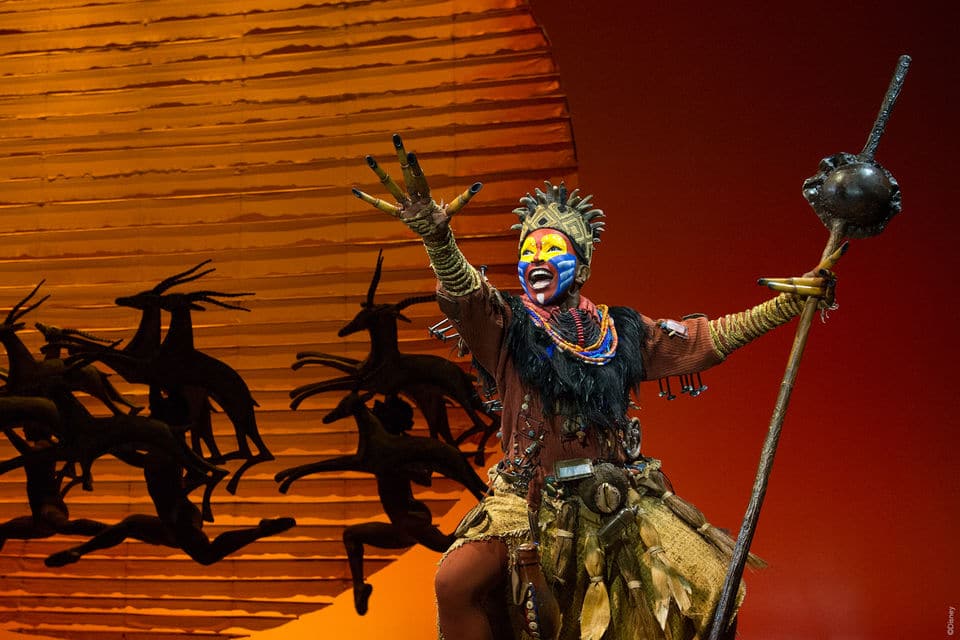 Making a reservation will eventually save you from paying more for your ticket than you expected. But if you want to pay a lot less, you can try your luck at the ticket lottery. The principle is simple: the day before each performance, a small quantity of tickets is put at stake. By entering this lottery for free, you can be drawn at random, which will get you a ticket for only $30 (£23).

On Broadway and in some other places in New York, you can also find TKTS stands . These will allow you to find cheaper tickets, thanks to unsold tickets. I'm not going to lie to you, there is little chance that tickets for The Lion King will be available at these stands, since that show almost always sells out. But you never know, you could still get a nice surprise, especially during slower periods, and these booths will in any case allow you to find cheaper seats to many other Broadway shows.

Where to sleep in New York?