What to do in New York in July?

You’re thinking about visiting New York in July? The weather in New York is absolutely beautiful in the summer and many events are organised, especially in the city's major parks. Weather conditions, tourist numbers, major events... in this guide, I present an overview of what to expect and what not to miss during a trip to New York in July. 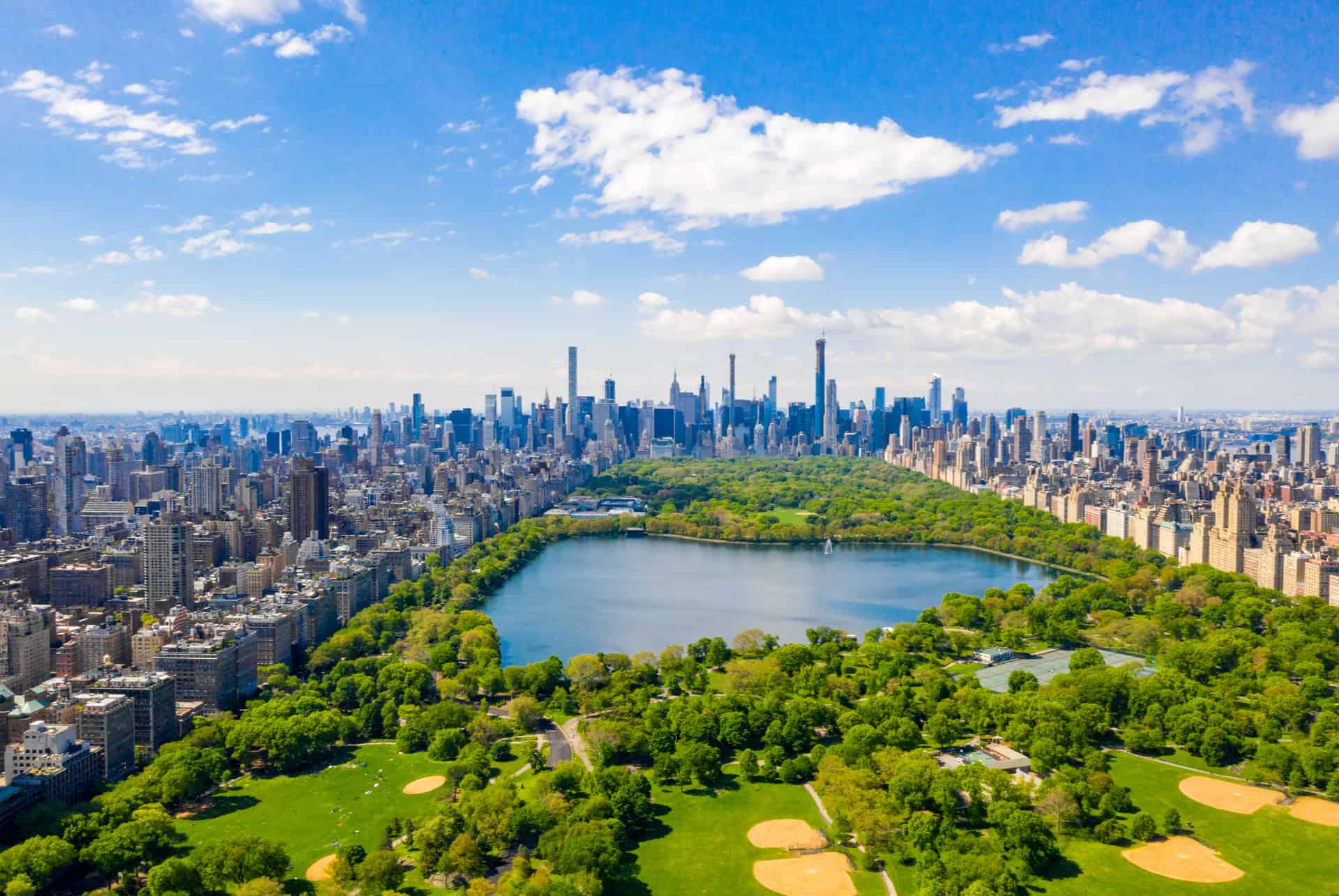 In July, it is hot in New York City. There is plenty of sunshine, and although it rains quite often, it’s never for long. Weather-wise, July is a very good time to travel in New York: you will have no problem exploring the city and doing a lot of outdoor activities. The mornings and evenings will be particularly pleasant, and it’s rather hot in the middle of the day... even a bit too hot sometimes. Average temperatures range from 23°C to 30°C. Daily sunshine is at its maximum – you can enjoy about 14 hours of sunshine per day.

July is one of the few months in New York during which you can sunbathe on the beaches and swim in the sea. The temperature of the Atlantic Ocean is never very high, but it averages 22°C in July, which makes swimming pleasant – especially on days when the temperature reaches well over 30°C 😉

What to do in New York in July

TO SEE THE AVAILABLE HOTELS FOR YOUR DATES OF STAY, CLICK HERE

Visiting museums or attending a Broadway show, for example, are perfect activities to keep you busy on a rainy day. But since the weather in New York City is usually very nice in July, here are a few activities that are especially popular during the summer, though they are available year-round. 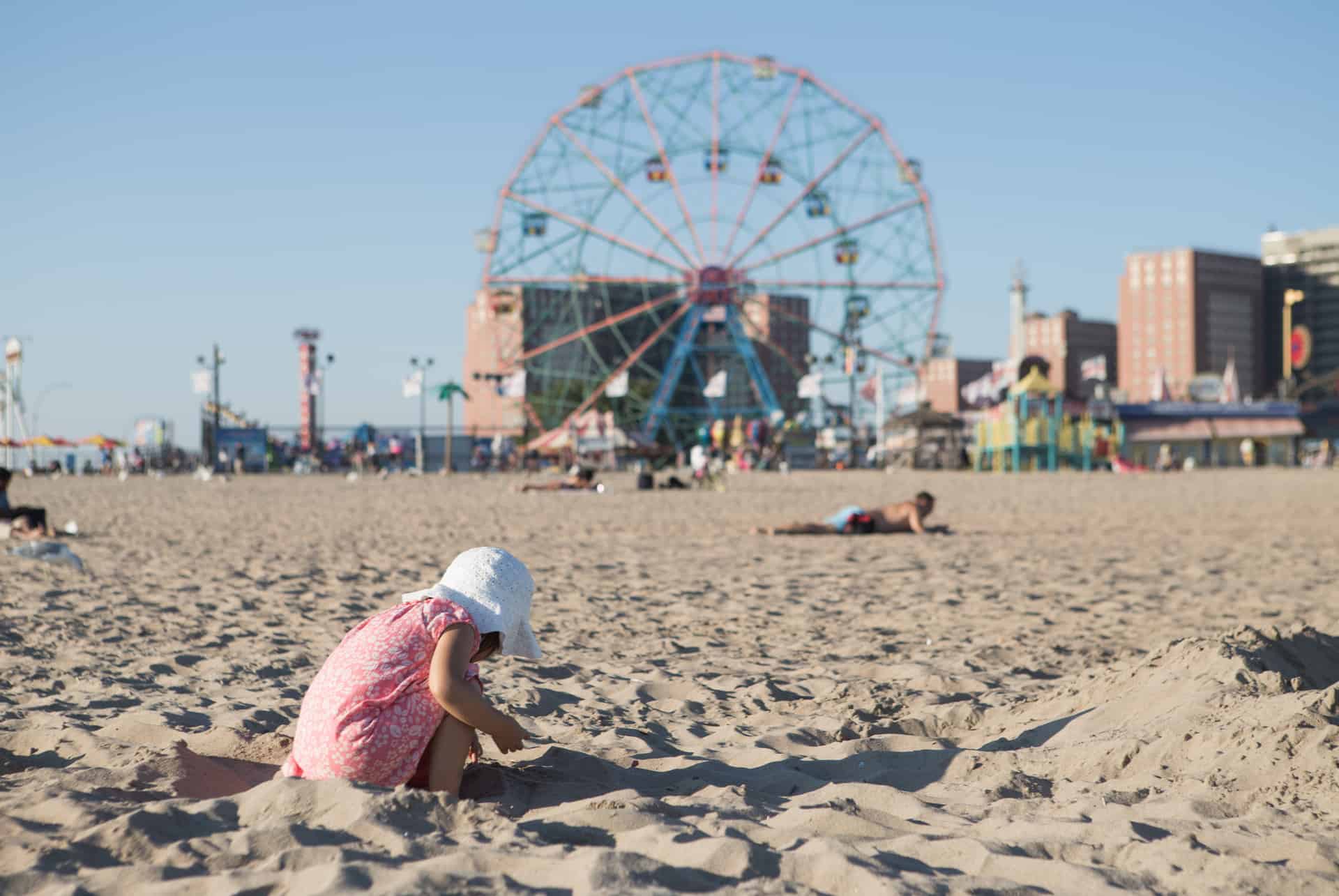 Perhaps you've been hesitating between going to New York and a beach destination this summer? The good news is that in August, you can do both! Swimming is obviously not one of the first activities that come to mind when you think of New York. But if you're in the mood for a day at the beach, just head south of Brooklyn to Coney Island!

This unique location is home to one of New York's largest beaches – over two miles long, and particularly popular at this time of year. Coney Island is also an entertainment neighbourhood, where you can visit Luna Park, one of the most famous amusement parks in the area, but also the unique New York Aquarium right next door, where many species live in areas that replicate their natural habitats.

Take a mini-cruise in New York

During the summer in New York City, you can enjoy a cruise around Manhattan by day and by night. The most authentic option is the famous Staten Island Ferry, a free boat that runs daily at all hours of the day, and from which you can enjoy beautiful views of Manhattan and of the Statue of Liberty and Ellis Island. However, these ferries are really busy at this time of year!

To discover or rediscover the city in a much more pleasant way, you can also take a dinner cruise in New York harbour.

A little tip: since Macy's fireworks are shot from the East River bank, the evening of the 4th of July is the ideal time to take a dinner cruise, since you will be in the best possible place to enjoy the show!

Have you considered using a tourist pass? 🎫

For cruises, a good plan may be to opt for the New York City Pass – a multiple ticket that will allow you to take a pleasant cruise around Manhattan or to the Statue of Liberty, on top of visiting other great New York attractions. This tourist pass is ideal if you want to discover the city's main sites. The pass will offer you many benefits during your stay, including access to 5 major tourist attractions 🙂

Have a great time in Central Park 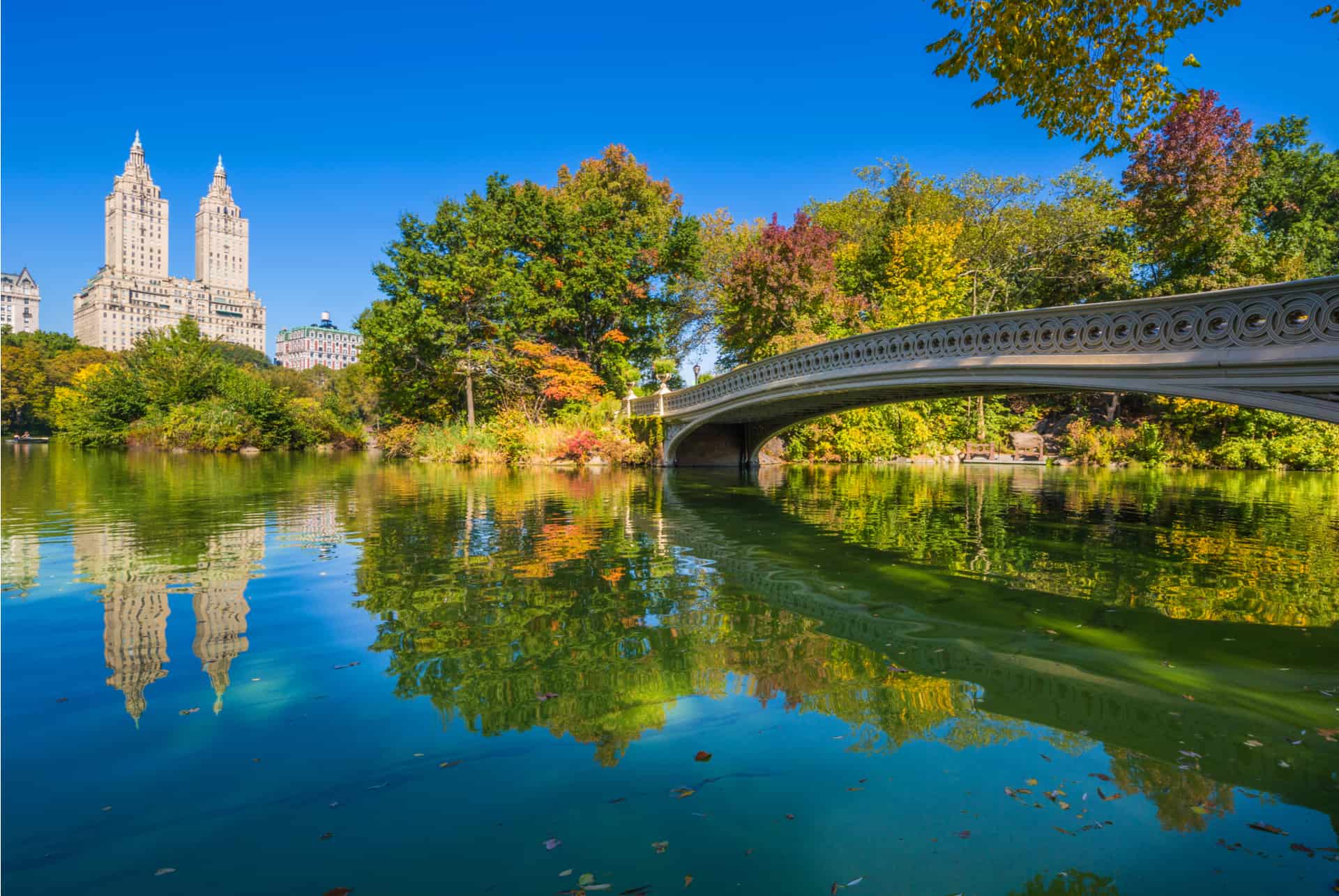 Central Park is of course an absolute must-see place in New York – and even more so during the summer. Not only can you get away from the hustle and bustle of Manhattan and relax in the shade on the hottest of days, but you can also enjoy a variety of fun summer activities in the park, including but not limited to:

To visit the park in the most enjoyable way during the summer, I recommend this bike and boat rental for the day.

Of course, you can also have a great time in all the other parks in the city, including Brooklyn Bridge Park, Hudson Square Park and Bryant Park.

By travelling to New York during July, you will also get the opportunity to attend some great events.

The 4th of July is Independence Day, the American bank holiday. Throughout the day, a festive atmosphere fills the streets of the city, and you will be able to see how fervently New-Yorkers celebrate their independence. The biggest event of the day is the Macy's Fourth of July firework display, which you can watch from a park, a bar, a rooftop or even from the water 😉 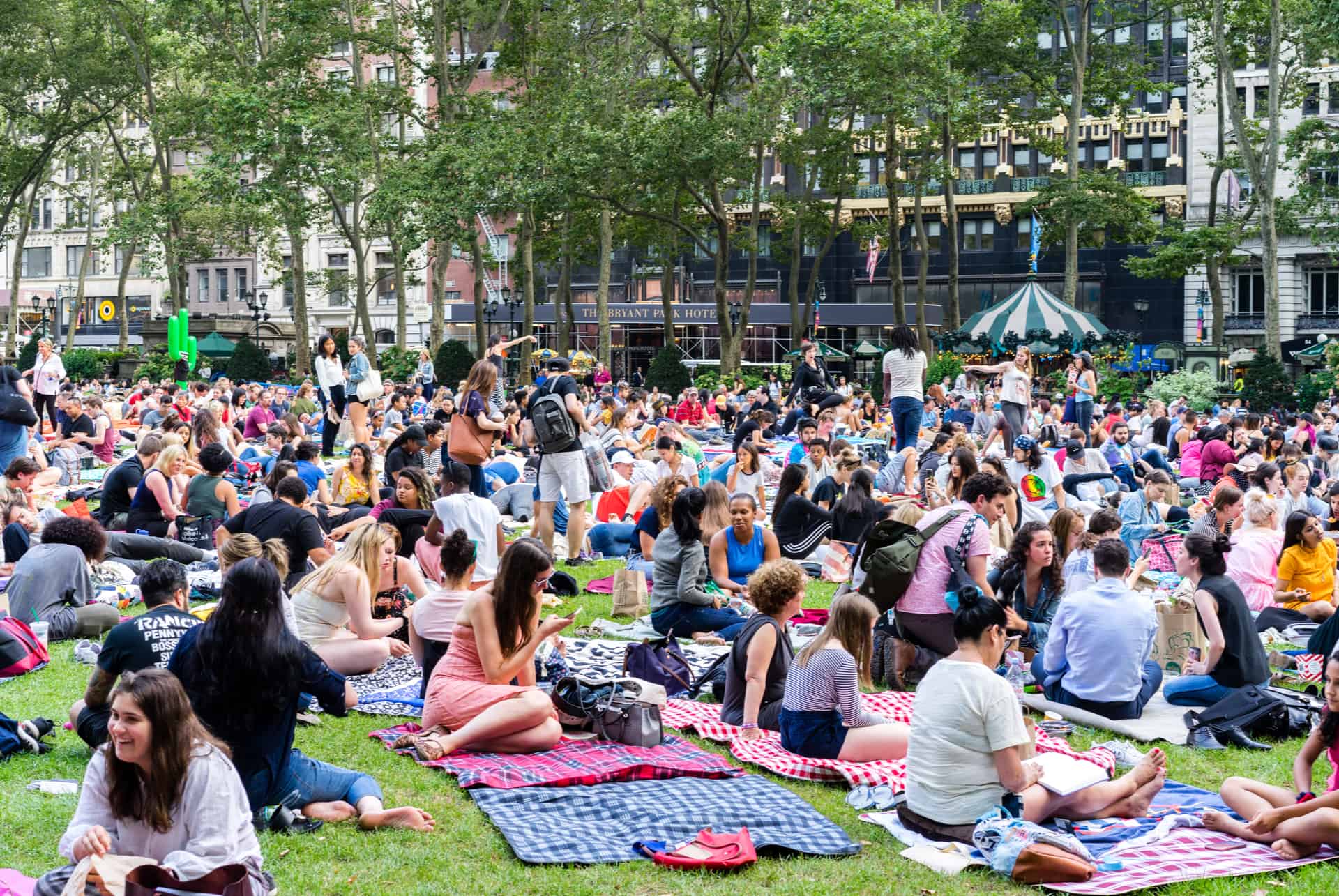 Bryant Park Movie Nights (also known as Bryant Park Movie Screenings) is one of the most popular summer events in New York. Every year, from mid-June until the end of summer, movies are shown outdoors on a giant screen, and it is possible to attend for free. There is only one requirement: finding a seat! This will actually not be easy, for you will have to arrive several hours before the start of the screenings to find a place to sit.

New-Yorkers don't hesitate to come and lay down their blankets as early as 5pm, even though the screenings only start around sunset. As a rule, it's the big, well-known films that are shown – though never the recent releases. Of course, the programme changes every year. A similar event also takes place in Brooklyn Bridge Park: Movies With a View.

Shakespeare in the Park

This theatre programme offers free admission to plays by William Shakespeare and other great classical works at the Delacorte Theatre, an open-air amphitheatre in Central Park. Tickets are distributed only on the day of the performance, in front of the theatre. A queue forms in the morning and tickets are usually all sold out by noon.

Since 1966, this classical music festival has taken place every year during the summer in New York, usually between mid-July and mid-August. Concerts are held in major venues around the city, including the Lincoln Center, John Jay College and the New York State Theatre.

During the festival, the musicians of the Mostly Mozart Festival Orchestra play works by Mozart, but also by other great classical composers such as Beethoven, Bach and Wagner.

Good Reasons to travel to New York in July 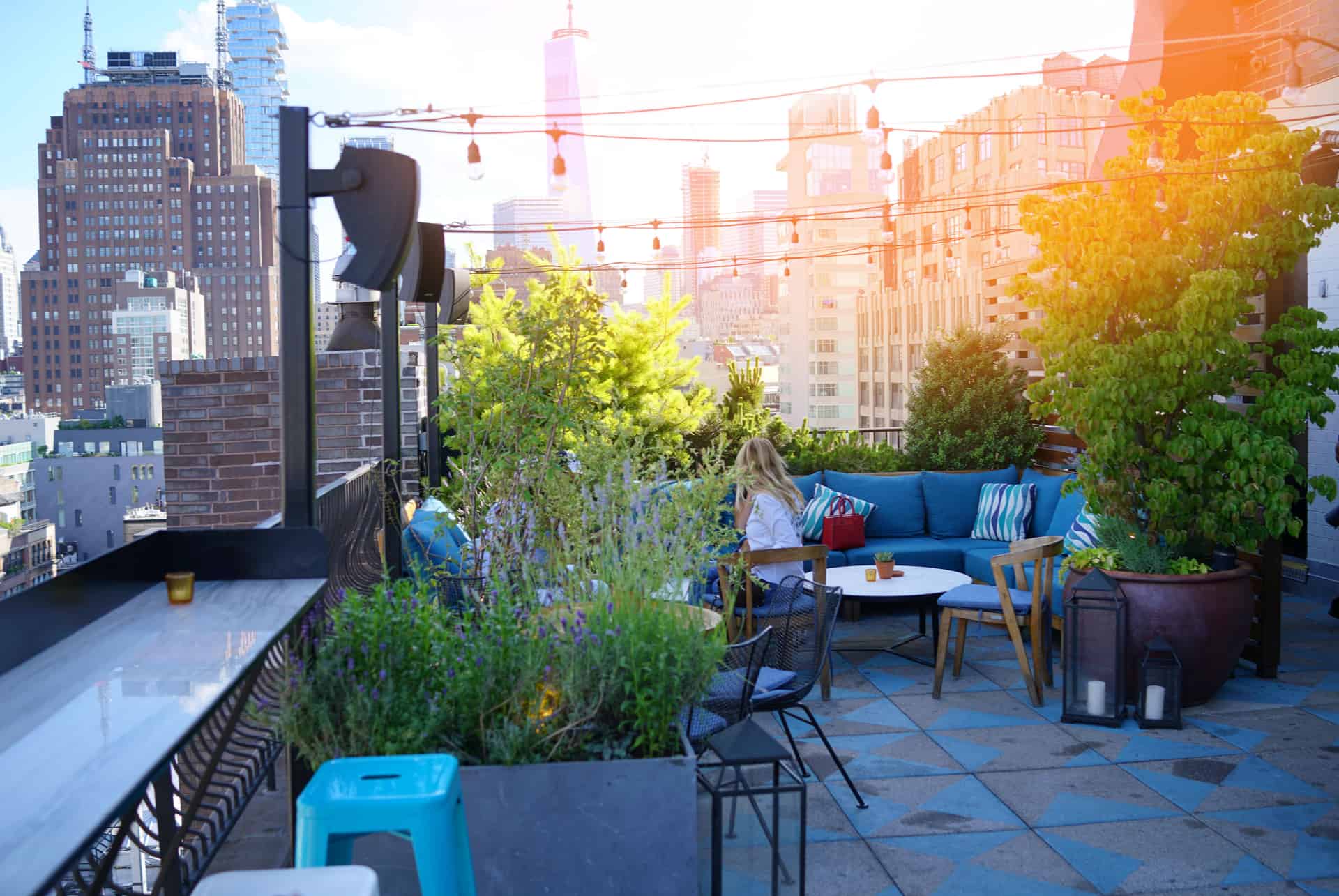 To conclude this post, let's look together at the good reasons to go to New York in July, but also at the few inconveniences you should expect if you travel in summer.

In fact, the negatives are directly related to the high tourist season. The most popular sites are often crowded, and you could end up having to spend a lot of time in queues during your stay. To avoid wasting too much time, it will be necessary to be organised, mainly by making your visits at the right time (early enough in the morning or at the end of the day), and if possible, by reserving tickets that will allow you to skip the queues.

Another disadvantage is that prices are higher during the high season. If you want to travel to New York for example, you will have to pay almost €200 more for a return ticket from Paris in July than at other times of the year. The same applies to hotel rooms, which are generally 30% to 40% more expensive than in quieter periods.

With the exception of these few inconveniences, July is a really good month to travel to New York. The weather is excellent (although sometimes a little too hot), and there is plenty of sunshine for outdoor activities. Moreover, many New-Yorkers will be away on holiday, which means that the city will be a little less crowded and the atmosphere more relaxed. Finally, summer is a time when you can do a lot of exploring without spending a single penny in New York!

Here's the end of this article! If you are still hesitating and thinking of perhaps going to New York in August, don't hesitate to read my article on the subject 😊