Roosevelt Island is a small narrow island in New York City, located on the East River between Manhattan and Queens. Previously known as Minnahanock, Manning's Island, Blackwell Island or Welfare Island, it was renamed in 1973 in honour of the former president of the United States.

During your stay in New York, taking the time to visit this island attached to Manhattan will be an excellent way of discovering another facet of New York.

The history of Roosevelt Island 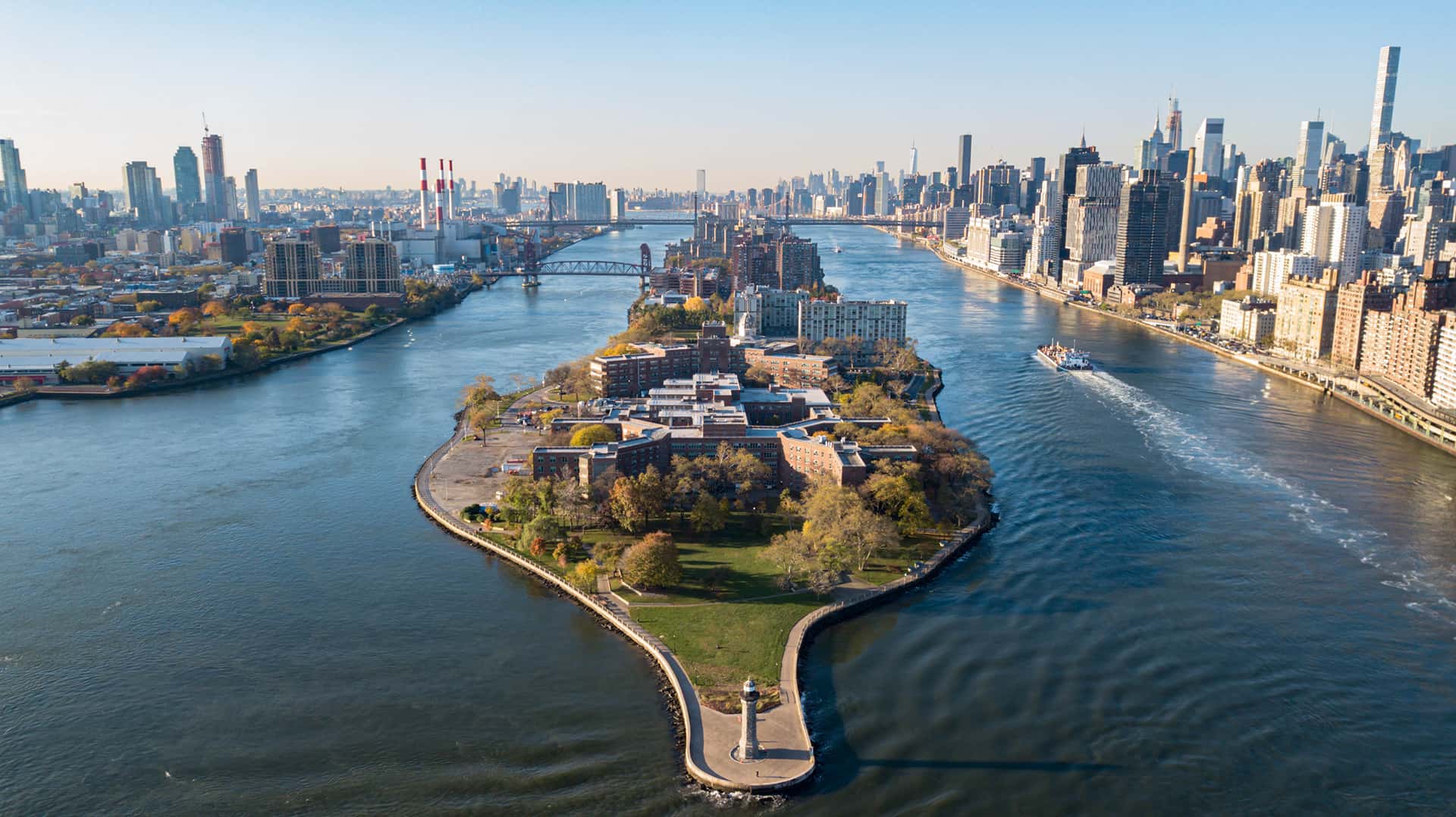 Roosevelt Island was originally part of the Canarsie Indians' territory, before being purchased in 1637 by Wouter van Twiller, the Dutch governor at the time. In 1666, after the Dutch defeat, the island went to the English captain John Manning, then to his son-in-law Robert Blackwell. They both renamed the island after themselves.

In 1828, the city of New York bought the island, which was then used as a penitentiary, hospital and asylum.

In the 1970s, the island was once again renamed, this time in honour of Franklin Delano Roosevelt, the 32nd President of the United States, who was head of government during World War II.

At the same time, the city signed a 99-year lease and launched a major development project. The island gradually became much more residential, and its transformation largely accelerated from the early 2000s. Today, more than 15,000 New Yorkers live on the island.

How to get to Roosevelt Island ? 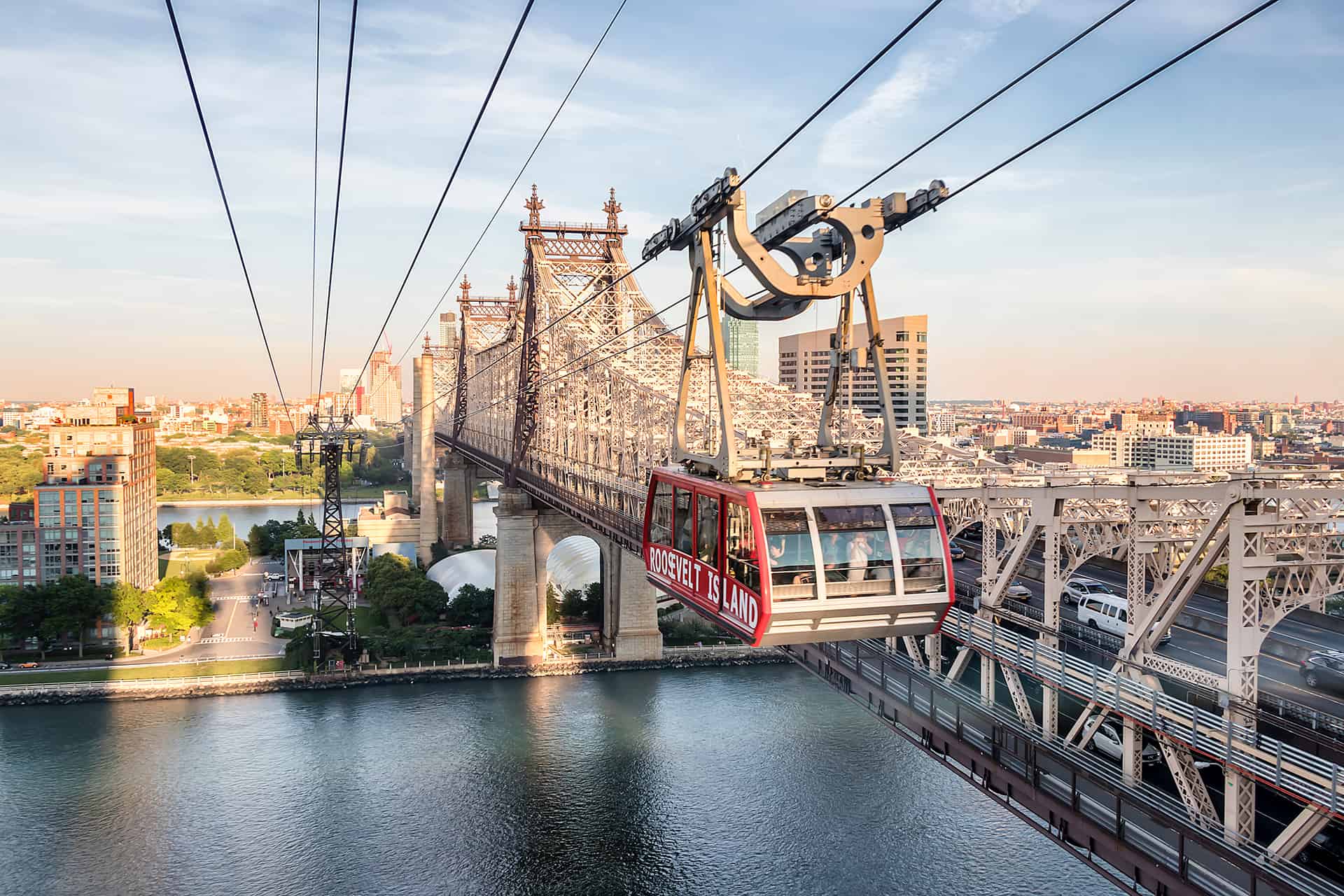 This means of transportation was put in place in 1976. It was originally intended to be used only while waiting for the construction of the underground line connecting the island. Yet more than 4 decades later, this cable car is still in operation, and it has become so popular that it can even be used with a MetroCard, like any other New York City public transport vehicles.

The Roosevelt Island Tram consists of 2 cabins, each of which can carry just over 100 people. The ride to the island is about 1 kilometre long and takes just 3 minutes, during which you can enjoy a unique view of New York City from over 70 metres above the ground.

To catch the Roosevelt Island Tram, you'll need to go to the intersection of 2nd Avenue and 60th Street in Manhattan, or to the foot of the Queensboro Bridge on Roosevelt Island. The cable car runs from 6:00 a.m. to 2:00 a.m. Sunday through Thursday, and from from 6:00 a.m. to 3:30 a.m. on Friday and Saturday. I would still advise you to avoid using it on weekdays during the peak hours of 7 a.m. – 9 a.m. and 5 p.m. – 7 p.m. More information on rush hours by following this link. The ticket costs $2.50 (£1.9) but you can also use an unlimited MetroCard.

If you want to travel as quickly as possible, then you can use the New York City Subway.

By taking the F line underground, you can get off at Roosevelt Island station. The NYC Subway operates 24/7. Trains run very regularly, at least once every 5 minutes during the day, and once every 20 minutes between midnight and 6:30 am.

The trip between Manhattan and Roosevelt Island takes about 20 minutes, and the boats leave about twice an hour. The ferry runs weekdays from 6:20 am to 9:00 pm, and on weekends from 7:20 am to 9:30 pm.

The ticket for the ferry costs $2.75 (£2.10), and it is not possible to board using the MetroCard. The ferry will be a great way to get back to Manhattan if you're not in too much of a rush after visiting Roosevelt Island. During the trip, you can enjoy a beautiful view of the Skyline from the East River.

What to see on Rossevelt Island?

Roosevelt Island is certainly not the most touristy neighbourhood of New York! In fact, up until a few decades ago, the island was mainly used to house institutions that were trying to be isolated from the rest of the city, such as a prison and an asylum. Today, Roosevelt Island has become a much nicer and more residential area, where you can discover some particularly interesting sites. 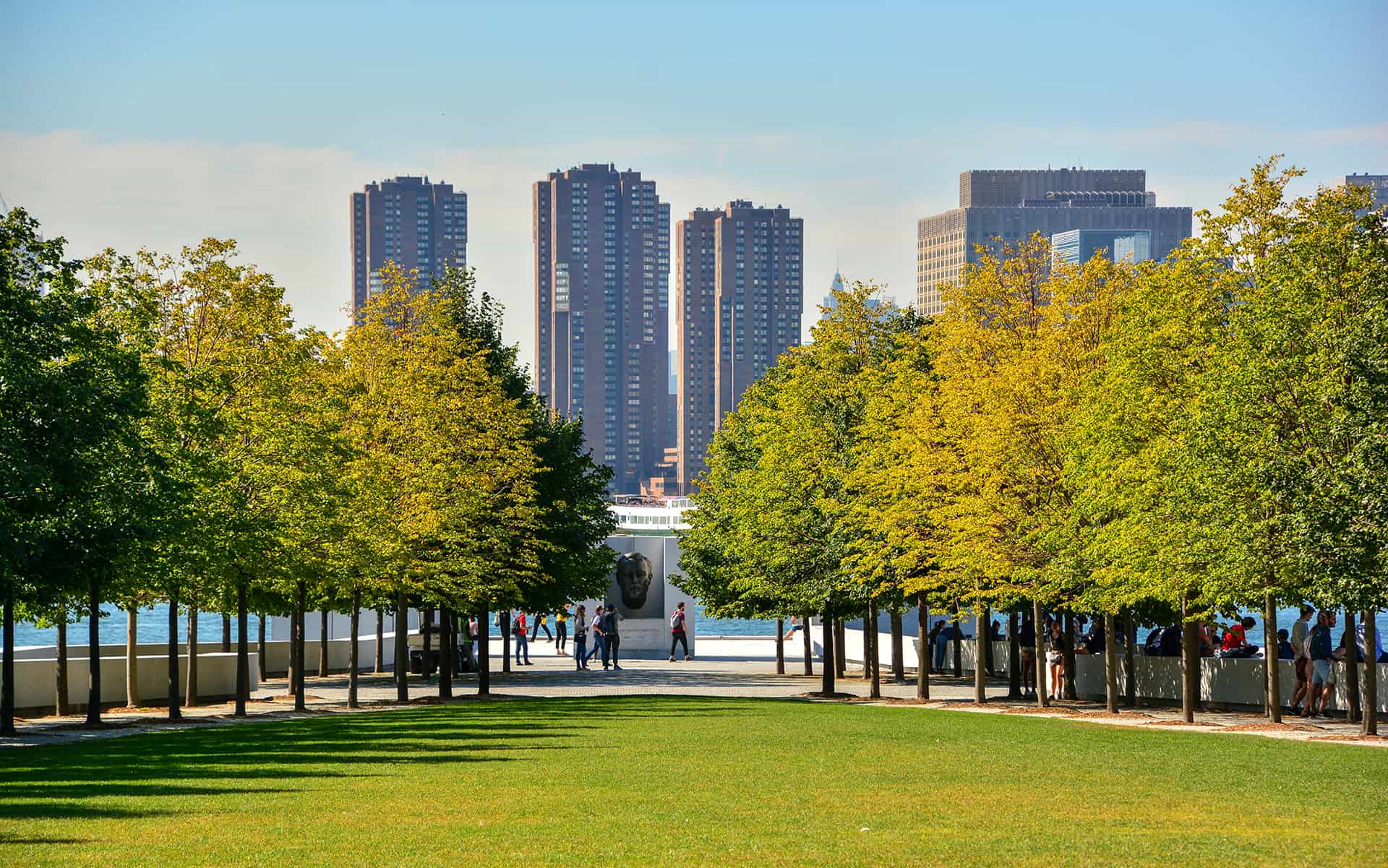 At the southern end of the island, a large green space honours the president who gave his name to the island.

Designed by architect Louis Kahn in 1974, but not completed until much later, in 2012, this large tree-lined park is now one of Roosevelt Island's most iconic locations. For photography enthusiasts, Four Freedom Park is among the best sites in the city. In particular, it offers unique views of the Manhattan Skyline and some of New York's most famous buildings, such as the UN headquarters and the Chrysler Building, as well as the Queensboro Bridge.

In this triangular-shaped park, you can also discover a large bust representing this former president of the United States, made by the sculptor Jo Davidson. Behind this bust is engraved the speech that Roosevelt gave in 1941 before the Congress, and whose title gave its name to the park.

The Smallpox Hospital and the Strecker Memorial Laboratory

The Smallpox Hospital is a former hospital, now abandoned, which opened in 1856 and closed a century later. Since 1973, it has been listed as a historic building, as has the laboratory next door.

This neo-Gothic hospital building is now in ruins and could look like something out of a horror movie. A rehabilitation project has been launched, so that the remains of this building can be visited.

Right next to the hospital, you can discover the Strecker Memorial Laboratory, a Romanesque Revival building built in 1892, which was the very first laboratory in the United States used for bacteriological research. Today, it is occupied by the MTA (Metropolitan Transit Authority), the company in charge of public transportation in New York City.

This Gothic Revival stone lighthouse, located at the very north end of Roosevelt Island, was designated a historic landmark in 1976. Blackwell Island was the former name of the island, before it was renamed after the President of the United States. It was built in 1872, with stones transported by prisoners from the island's penitentiary.

In this very quiet place, you can admire a very nice panoramic view of the Upper East Side and Queens.

This octagonal building once housed the New York City Municipal Lunatic Asylum, a mental institution. During the first half of the 20th century, it had a particularly bad reputation, and was known throughout New York for the mistreatment of patients.

After its closure in 1955, the building was left abandoned, before being restored. Today, it is home to some very desirable luxury residences. It is possible to visit the entrance hall and discover its beautiful rotunda and huge spiral staircase.

The Chapel of the Good Shepherd

During the 19th century, the first missionaries sent by the Anglican Church arrived on Roosevelt Island.

At the time, the islanders were mostly mentally and physically ill and from the lowest social classes.

Seeing this, the chaplain called upon architect Frederic Clark Withers to build the most beautiful church in the city, in the most disadvantaged neighbourhood.

The Chapel of the Good Shepherd was completed in 1889 and remained in operation until 1952. In the 1970s, as the island slowly became more residential, the chapel became a community centre, and it remains one of the most beautiful buildings in the neighbourhood today.

You've reached the end of this article about Roosevelt Island. I hope you enjoyed it! 😊