What to do in New York in June?

You’re planning to visit New York in June, but need a little information about the month before you can leave with peace of mind? June is one of New-Yorkers' favourite months, so it's not surprising that many tourists want to discover the city at this time of the year. In this post, I'll give you an overview of what to expect during a trip to New York in June.

WHAT IS THE WEATHER LIKE IN NEW YORK IN JUNE? 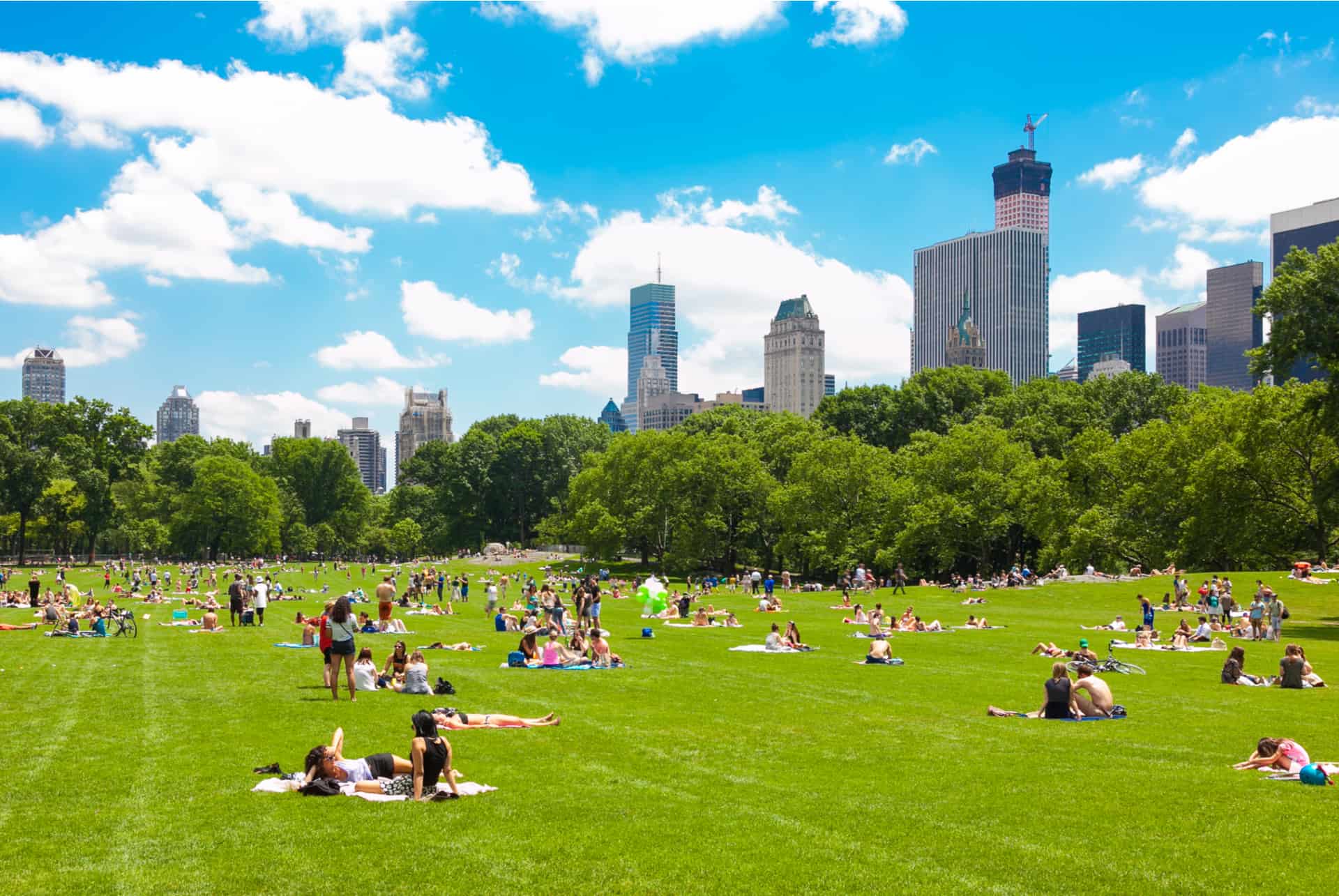 Climatically, the weather in New York in June is almost ideal. This is really the time of year when you can enjoy the most pleasant weather, with sunny days that are quite warm, but never stifling.

June marks the transition from spring to summer, so temperatures continue to rise as the weeks go by, while rainfalls get a little heavier. From the first days of June, you can often enjoy big blue skies and idyllic conditions. The temperatures are mild in the morning and become increasingly pleasant during the day. Even in the evenings, the weather remains good and you can easily go for a walk in a park or have a great time on one of Manhattan's rooftops.

The average temperature in New York City during June is between 17°C and 26°C.

WHAT TO DO IN NEW YORK IN JUNE?

You can do almost anything in June in New York, so it will be quicker if I start by telling you about the few things you can't do during this time of the year.

During the month of June, it is of course no longer possible to do the popular winter activities in New York, such as skating on the city's most beautiful rinks, or visiting the Christmas Markets.

In June, it is also still a little too early to go swimming and enjoy the beaches of New York. Note that depending on the weather though, the water temperature can sometimes exceed 20°C, which may be suitable for those who enjoy a cool swim 😉 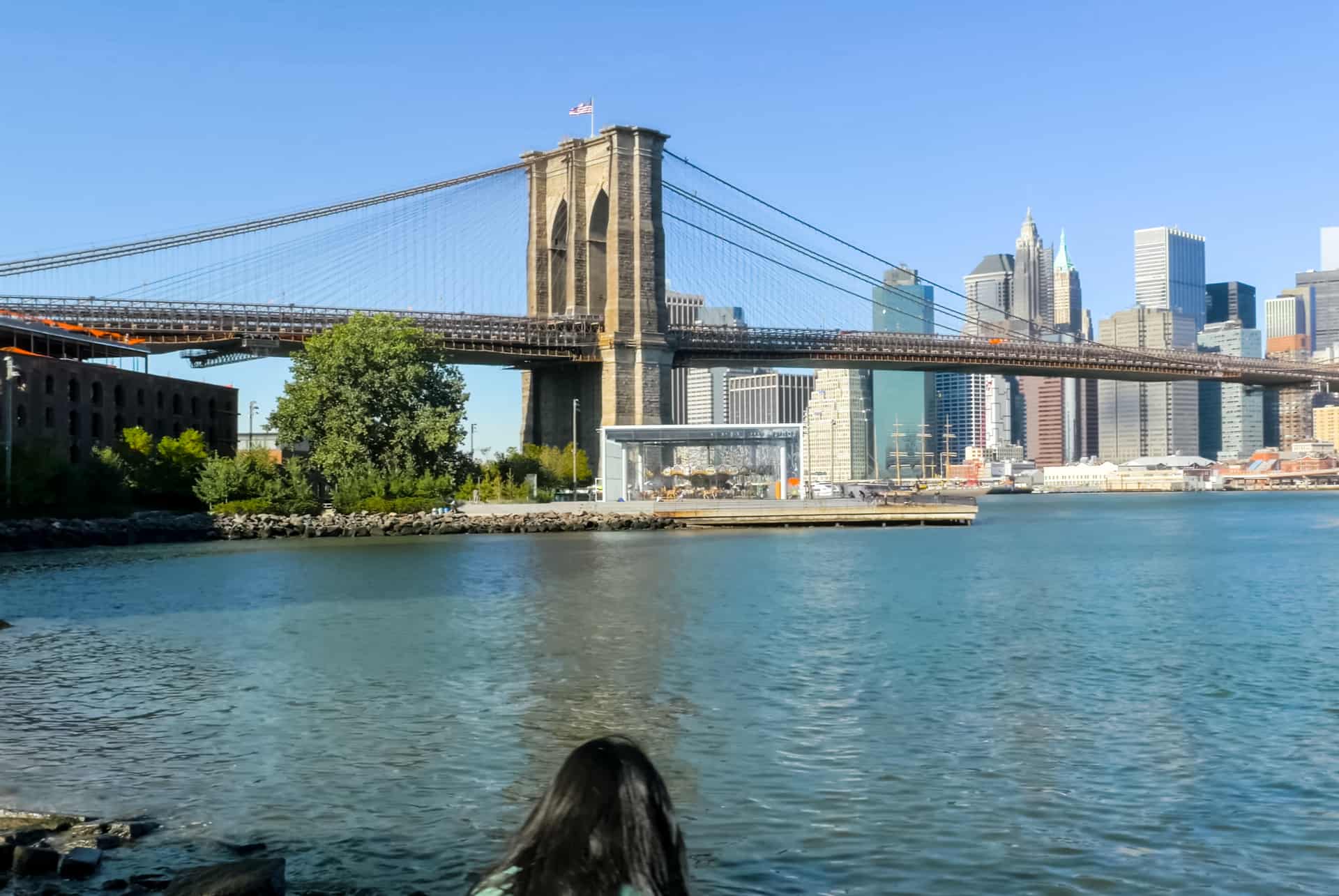 Apart from these few exceptions, you will be able to discover all the major attractions of the Big Apple if you visit New York in June:

Have you ever considered a tourist pass? 🎫

If you are planning to do a lot of activities during your trip to New York, I recommend the purchase of a New York City Pass. This tourist pass gives you access to 5 major tourist sites and gives you discounts on many other attractions. Moreover, you will be able to choose among some of the activities offered (2 fixed activities + 3 activities you can pick from a list). This pass is valid for 9 days from its first use 🙂

In addition to all these discoveries without which a stay in New York could not be completely successful, you will also have the opportunity to attend a number of major annual events when travelling during the month of June.

June is the perfect time to go to a sports game in New York. In the NBA, it's the end of the playoffs and big games are sometimes played at Madison Square Garden, in Manhattan. It's also the end of the playoffs in the NHL, so a few New York Rangers and New York Islanders games may be played at Madison Square Garden, or at the Barclays Center in Brooklyn.

The regular baseball season runs from March to October, so you will also be able to catch a Mets game at Citi Field in Queens, or a Yankees game at Yankee Stadium in the Bronx. 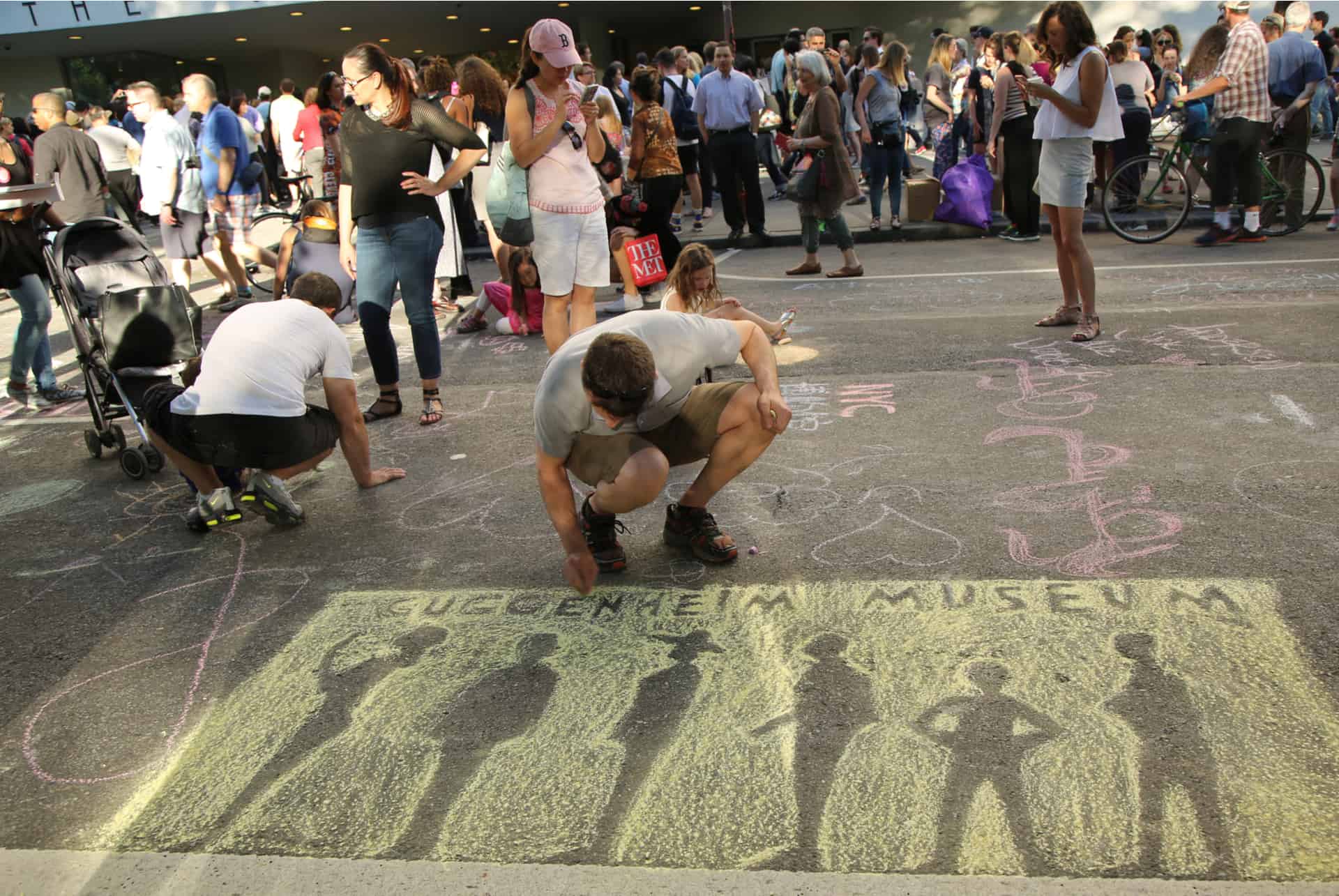 Museum Mile is the name of an area on Fifth Avenue that houses dozens of the best museums in the United States – no less! During the month of June, the Museum Mile Festival celebrates culture by allowing free access to these museums from 6pm to closing time.

During this festival, you will be able to visit the Met, the Guggenheim Museum, the Jewish Museum or the City Museum of New York, among others. There will also be entertainment in the street: concerts, dance performances, street artists, etc.

This is a true tradition in New York, having attracted hundreds of thousands of spectators every year for over two decades, and its popularity is still as high as ever. The event is usually held between mid-June and mid-August. During this period, you will be able to attend numerous open-air large-screen projections of various movies.

These screenings are free, but you'll need to arrive well in advance if you want to get a seat on the lawns of Bryant Park. The films start at around 8 or 9 p.m., but it's best to be there at 5 p.m. to get settled comfortably. Don't forget to pack a picnic lunch!

The Tribeca Film Festival was founded in 2002 to support the Tribeca neighbourhood in Manhattan, following the September 11, 2001 attacks. It was founded in part by the famous actor Robert de Niro.

This independent film festival used to take place in April, but in recent years it has been held in June. During the event, there are numerous screenings of short and feature films, and awards are given for best film, best actor and best director, among others. 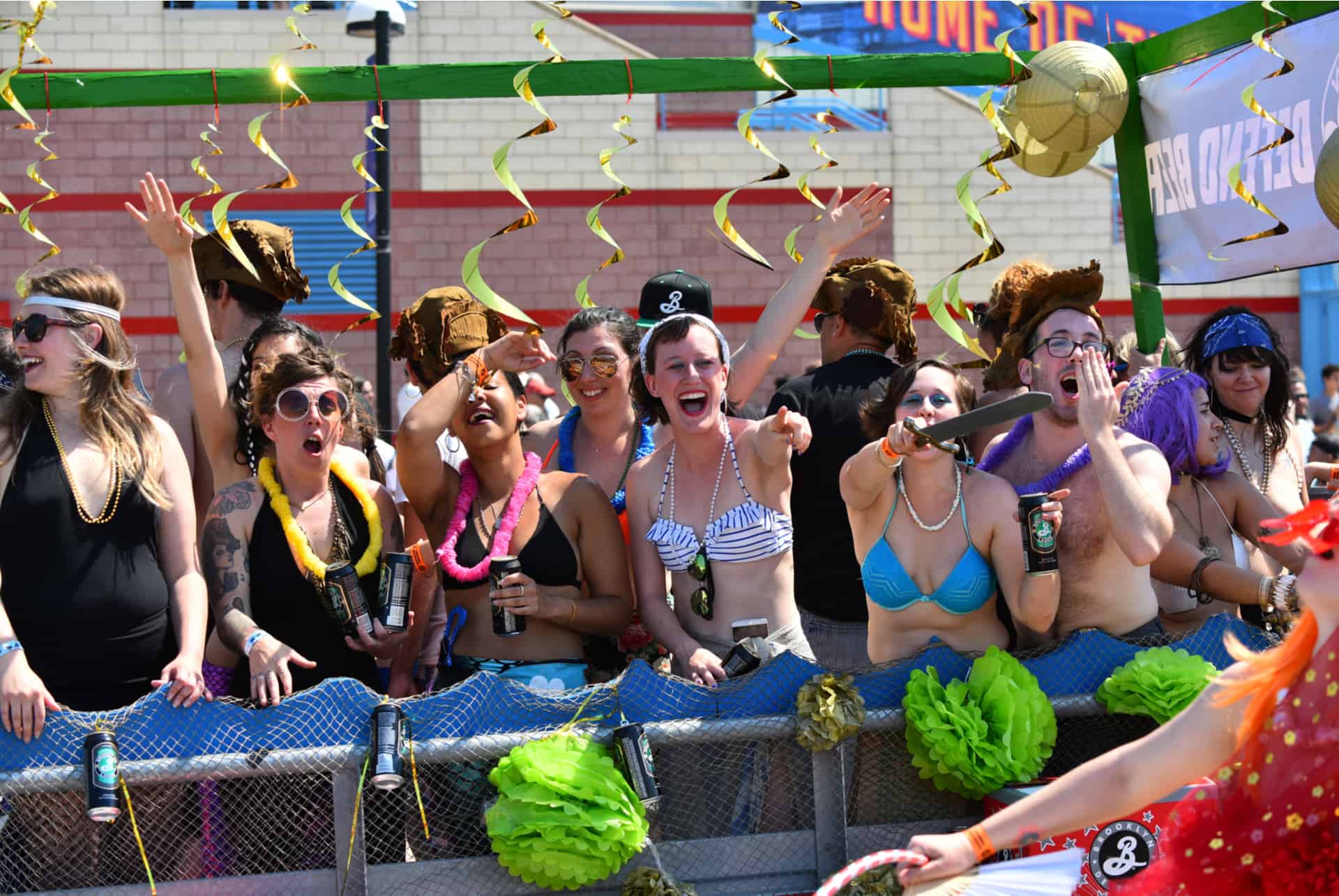 Every June, in Coney Island, you can attend – and even participate in the Mermaid Parade. This event was created in 1983 to celebrate ancient mythology, to allow New York artists to express themselves in public, and to celebrate the return of summer. Today, it is the largest art parade in the US. For the occasion, participants dress up as mermaids, newts and all sorts of sea creatures, often quite wacky.

A big parade is organised, with many floats, and everyone can participate since the only condition is to come dressed up! 😄

This June music festival offers classical and jazz concerts in one of the city's most popular parks. Washington Square is located in the Greenwich Village area of Manhattan. For the duration of the event, free concerts are held every evening from 8 p.m.

THE NEW YORK PHILHARMONIC CONCERTS IN THE PARKS

During the month of June, the New York Philharmonic performs free of charge in all the boroughs of New York, in some of the city's largest parks: Central Park, Prospect Park, Van Cortlandt Park, Cunningham Park... The performances start at 8 p.m., and to close the festival, a big concert is held at the St George Theater on Staten Island.

Travelling to New York in June: the Pros and Cons 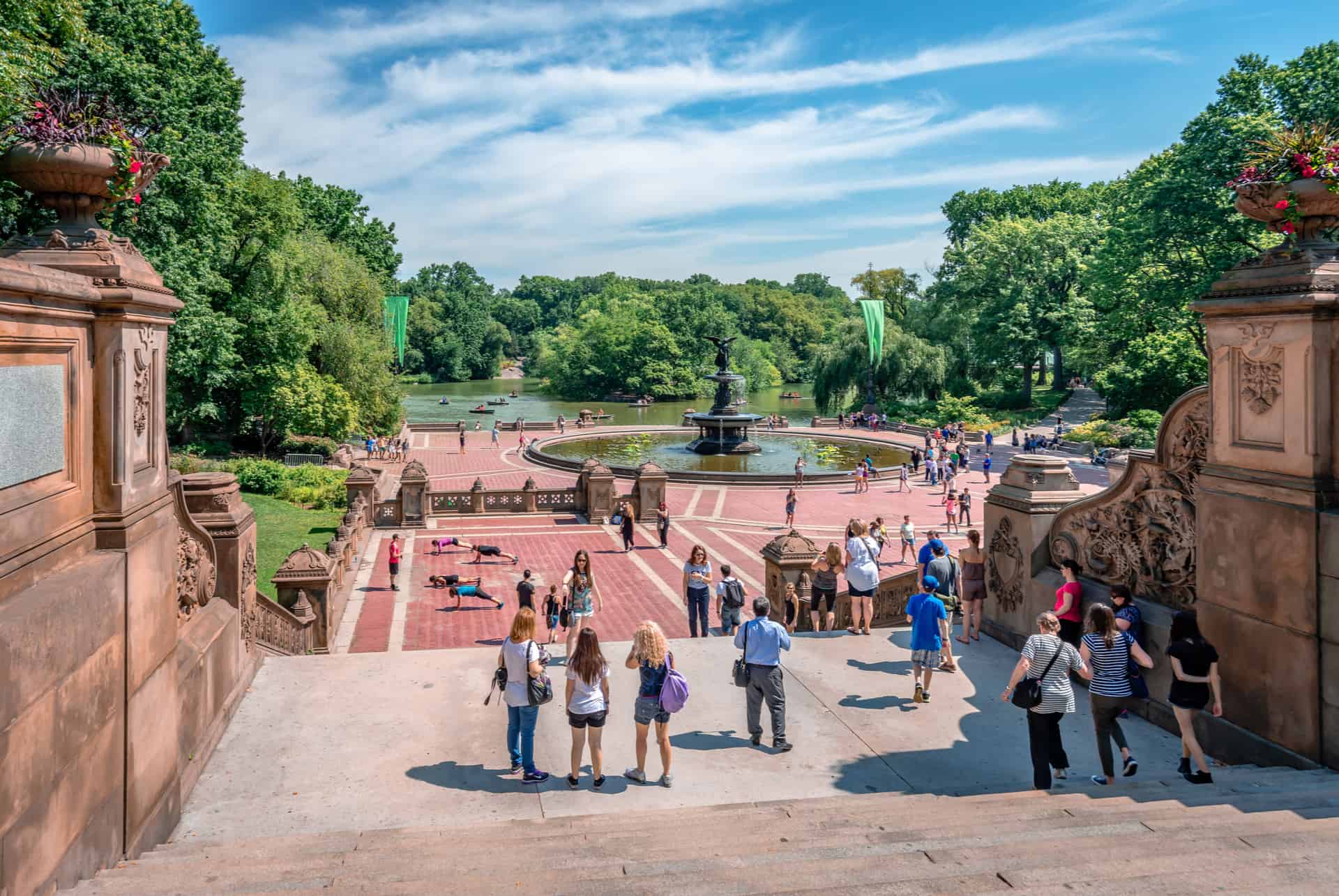 In the end, what are the good reasons to travel to New York in June? And are there any disadvantages for those who decide to go at this time?

There are indeed a few inconveniences you should expect if you go to New York in June. In fact, they are all related to tourist traffic. There are actually a lot of tourists at this time of year – so you'll need to be more patient during some of your visits.

This strong traffic also has an impact on prices: travelling to New York in June is expensive. Regarding accommodation in New York, it is when prices are at their highest. Double rooms in 2 or 3 star hotels cost on average €150 to €200 per night, which is easily €40 to €60 more than during the low season rates.

Airfare prices are also on the rise, although they get even more expensive in July and August.

But all this is more than made up for by all the advantages of travelling to New York in June. You'll enjoy the most pleasant weather of the year, which is worth any price. You'll also be able to see all of the city's most iconic sights, even the ones outdoors, and the weather will allow you to discover them in the evening as well. What's more, June is the perfect time to attend several major free cultural events.

Having said all that, if you are still hesitating between June and July, I recommend you to check my article New York in July before making your choice! 😊