Home > Activities > Top of the rock or Empire State Building?

TOP OF THE ROCK VERSUS EMPIRE STATE BUILDING

When visiting New York, you will want to see some of the city's most famous landmarks and neighbourhoods. One of the best ways to do this is to go to the top of a New York City skyscraper, for an incredible view. The two most famous observation platforms in New York are th Top of the Rock, located in Rockefeller Center, and the Empire State Building observation deck.
So where to go if you have to choose just one of these two sites? Find the answer in the following lines! 😊

The Top of the Rock 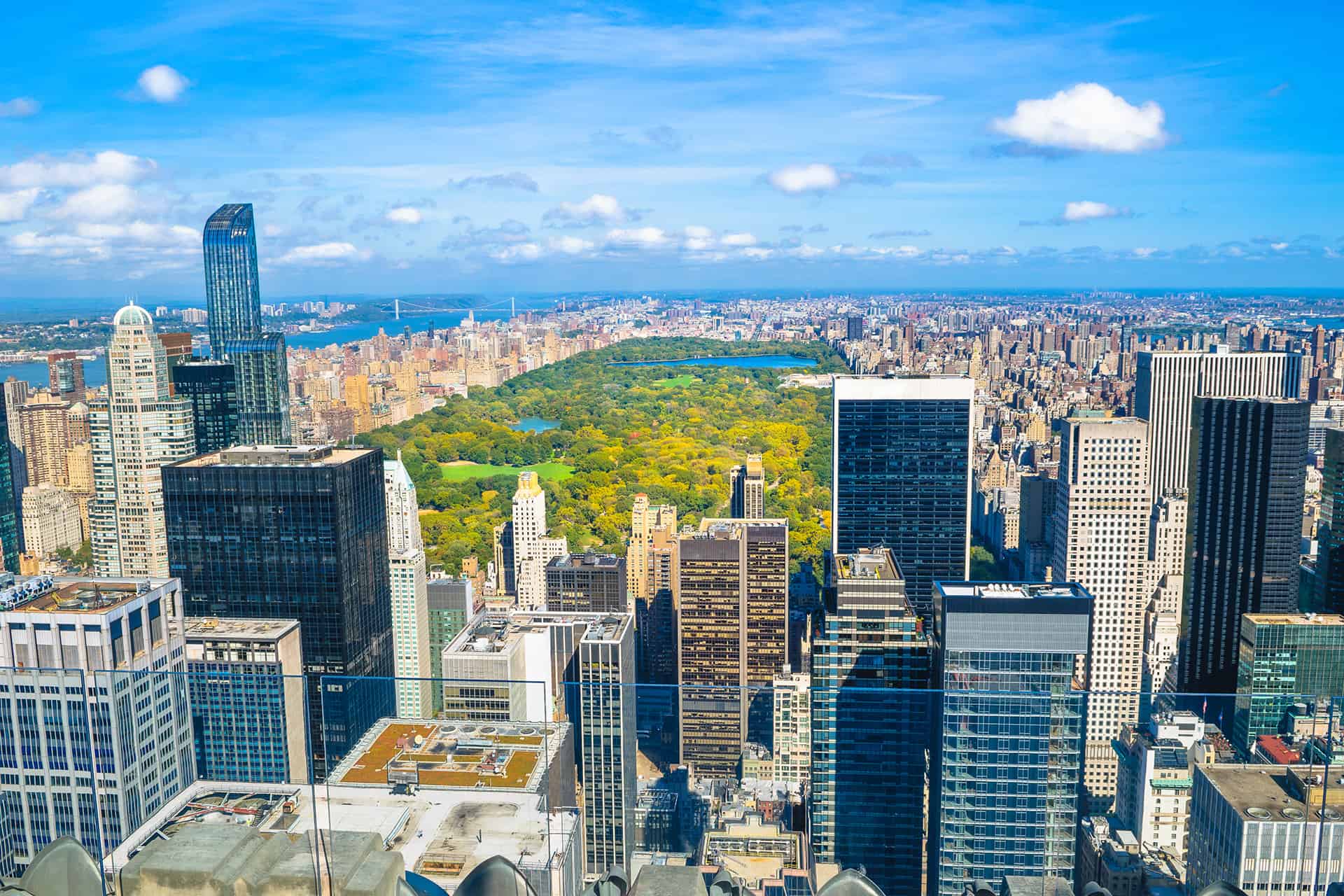 The Top of the Rock has now become almost as popular a viewing site as the Empire State Building in New York. The Rockefeller Center is a large complex of 19 buildings that includes offices, Radio City Music-Hall and NBC studios. The observatory is located in the Comcast Building – the main building.

The Top of the Rock spans three levels from the 70th floor of the skyscraper upward, and consists of a large indoor glass terrace and two outdoor observation areas that cover almost 900 square meters.

TO SEE THE AVAILABILITY FOR YOUR DATES, CLICK HERE

THE VIEW FROM THE TOP OF THE ROCK

To get to the 260m height, you'll need to take the Sky Shuttle, a fully glassed-in lift from which you will already be able to see the city as you ascend.

From the Top of the Rock’s various vantage points, you can see many of New York's landmarks and enjoy a clear 360 degree view of Manhattan: 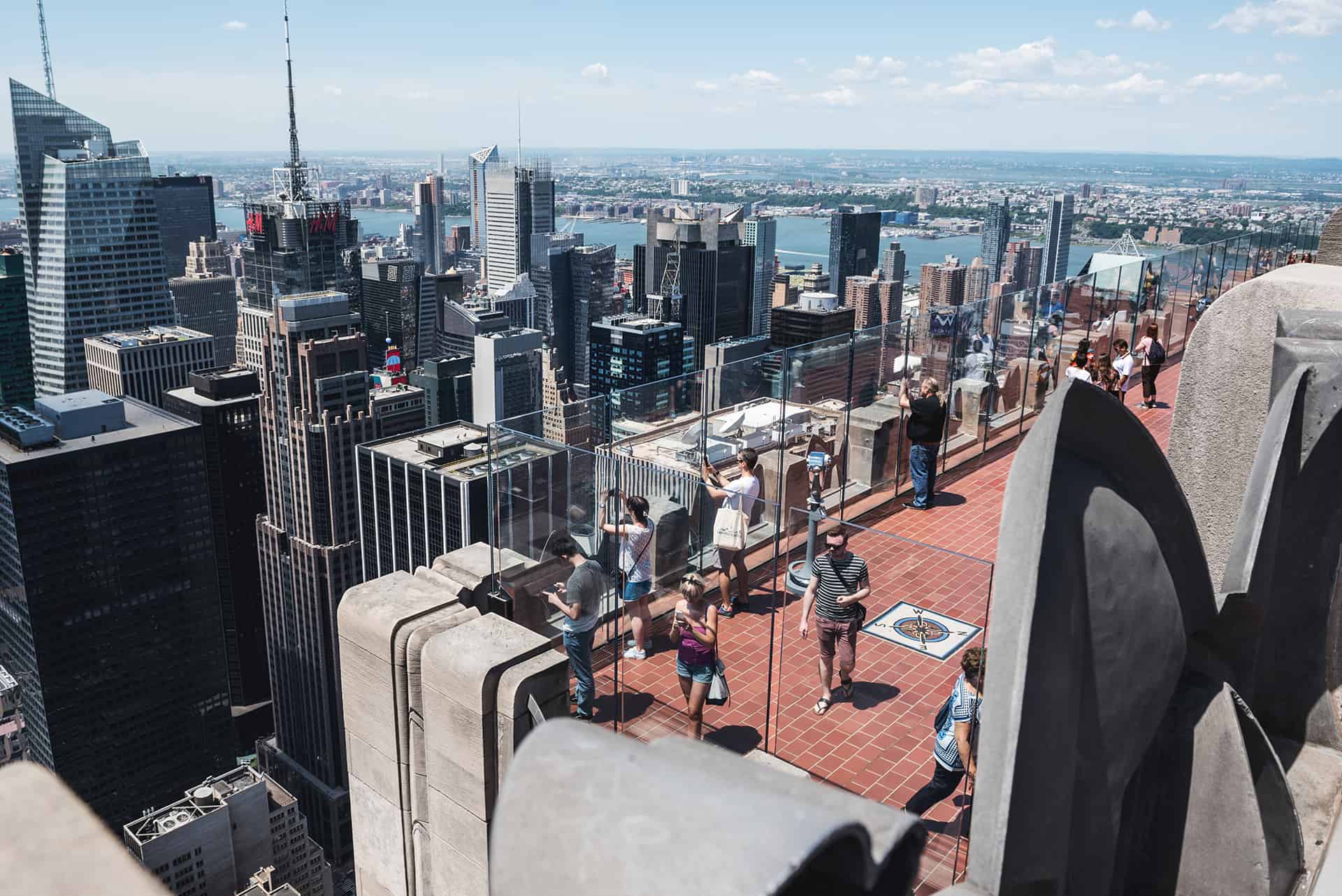 When to visit the Top of the Rock ?

The Rockefeller Center’s observatory is open every day of the year between 8 am and midnight (last entry at 11:30 pm).

The best time to enjoy the view is in the morning – that's when you'll get the best light for viewing Central Park and the city. At certain times of the year, you can even go during sunrise to enjoy an unforgettable experience.

Tickets to visit the Top of the Rock

As you can imagine, the queue can be quite long in such a popular place, so to save time I recommend buying your ticket online.

This ticket will allow you to see Central Park and the Empire State Building from the heights of New York, but also to visit the art exhibition inside the building and watch a documentary about the construction of the skyscraper during the Great Depression.

These tickets are not dated and will be valid for one year, starting from the date you choose at the time of purchase. This means you can access the viewing platform whenever you choose – when the weather is most suitable for example, or in the evening, to take advantage of the city's lighting.

Top of the Rock ticket prices (tickets prices are aligned with the dollar rate, so prices may vary slightly):

BOOK YOUR TICKETS BY CLICKING HERE

How to get to Top of the Rock ?

The Top of the Rock is located at 30 Rockefeller Plaza in Midtown, on 50th Street, near the intersection with 6th Avenue.

If you want to see the Big Apple from this observation deck, you can easily get there by underground, getting off at the 47–50 Sts-Rockefeller Center station – which is a 3-minute walk only from the building's entrance.

The Hop On Hop Off sightseeing bus, which passes through New York's major attractions, also has stops close to Rockefeller Center. Tickets for the Hop On Hop Off tour bus are usually included in the City Pass for New York. 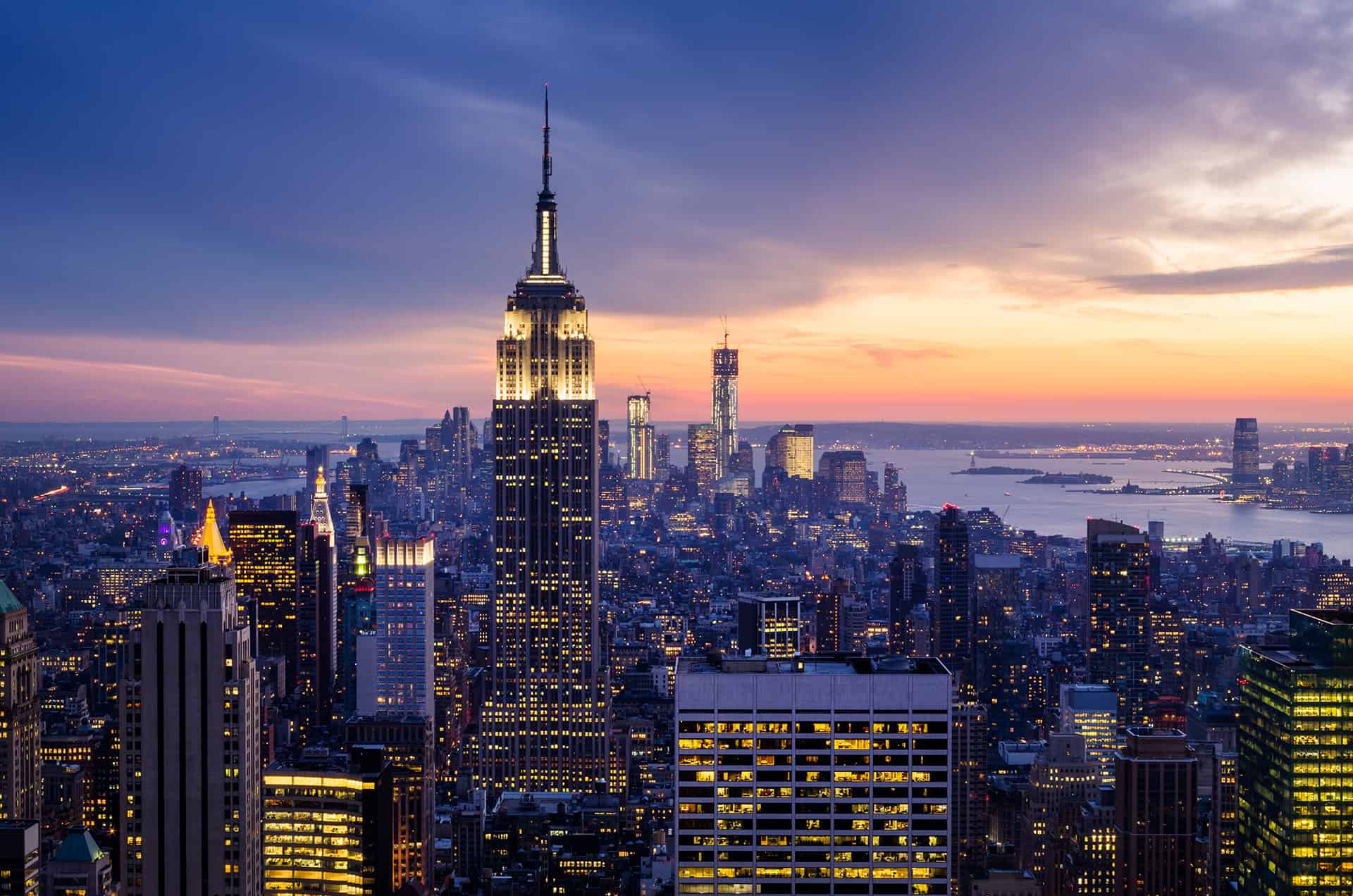 The Empire State Building is more than just a New York skyscraper – it is one of the symbols of the city. The 102-storey Art Deco building was built between 1929 and 1931 and is one of the most famous buildings in the world. Shortly after its construction, it was already famous worldwide, especially after being climbed by King Kong in the 1933 film.

It is the third tallest building in New York, and one of the monuments you can immediately identify when looking over the Manhattan skyline. Inside, you can access two different observatories, one located on the 86th floor and the other on the 102nd floor.

The Empire State Building is often considered an absolute must-see for anyone exploring New York.

SEE AVAILABILITY FOR YOUR DATES BY CLICKING HERE

The view from the Empire State Building

Both observatories offer unobstructed, panoramic views of the entire island of Manhattan and much of the rest of New York City. From them, you can see the Statue of Liberty, Times Square and the Brooklyn Bridge, among others.

The 86th floor observatory is made up of an interior section and an exterior walkway that goes all the way around the building. It is there that you can enjoy one of the most beautiful views of New York – perfectly clear and 360 degrees.

You will then take a glass lift to reach the Top Deck on the 102nd floor, from where you will discover an even more impressive panoramic view. 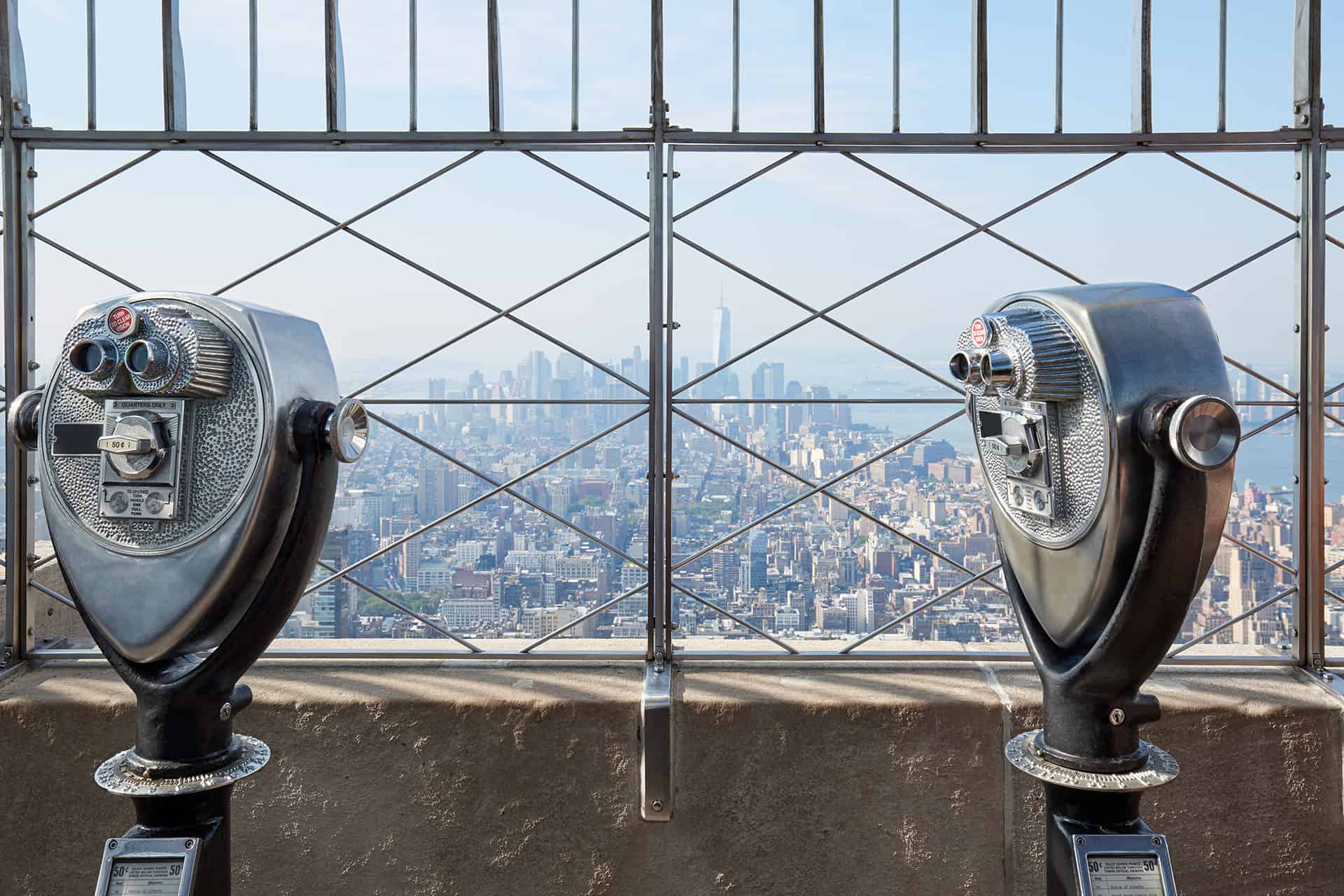 When to visit the Empire State Building ?

The two observation decks of the Empire State Building can be visited daily between 8 am and 2 am.
The best views here are in the late afternoon or early evening, when the sun begins to peek over the horizon. Should you watch a sunset from the Empire State Building, you will see New York transform as the city lights come on. As there is no time limit on the tour, I recommend going up to the observatory a few dozen minutes before sunset, and stay until all the city lights are on.

You can find several different tickets to the Empire State Building observatories, and two of them are particularly interesting.

This ticket gives access to the 86th floor for a 360 degree view, and to the interactive museum on the 2nd floor. You will be offered an audio guide for your visit. Two options are available, the standard ticket , which avoids having to queue in front of the ticket office, and the express ticket , which offers VIP access and will also allow you to pass by the queue in front of the lifts.
Standard ticket prices :

The express ticket is offered at a single rate of approximately €70 (£58) per person.

This ticket gives access to the Empire State Building observatories twice, once during the day, and again at night after 9 pm. You will also be able to see the interactive experience on the 2nd floor.

This ticket is available at a single price of approximately €55 per person.

How to get to the Empire State Building ?

The Empire State Building is also located in Manhattan's Midtown area, on 34th Street, between the 5th and 6th Avenues.

To reach it, you can take the underground to the 34 Street-Herald Square station, and just like for the Rockefeller Center, the Hop On Hop Off tourist bus also makes a stop by the Empire State Building.

Discover both sites with the New York City Pass 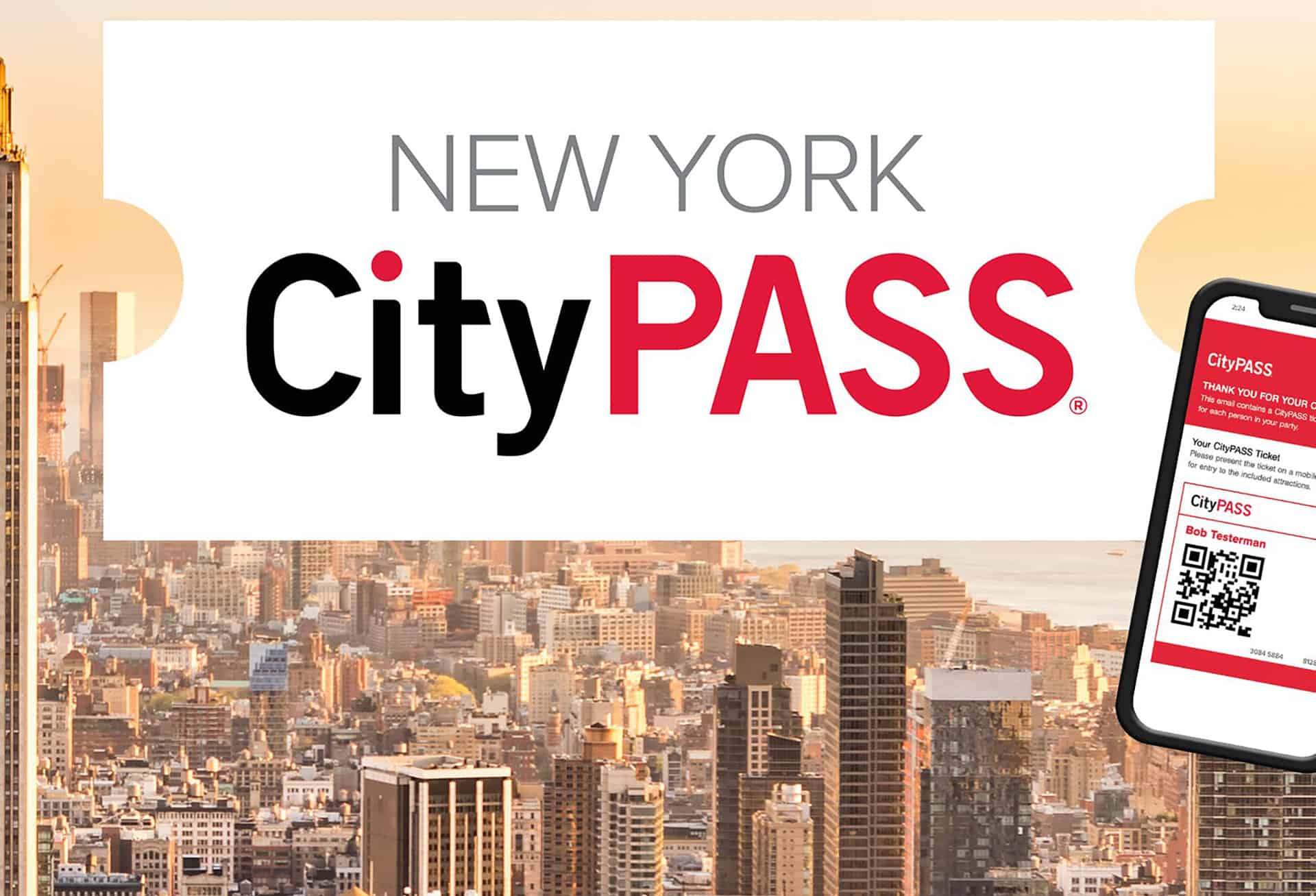 Still can't decide which skyscraper you should visit on your trip to New York? Well, you don't have to choose! The New York City Pass is a tourist ticket for New York that will allow you to choose 6 attractions to visit. The Empire State Building and the Top of the Rock are just two of the attractions on this tourist pass.

If you want to see these two sites, as well as 4 other great attractions in New York, this pass will save you time and money!

MORE DETAILS ON THE NEW YORK CITYPASS BY CLICKING HERE

Another alternative : the One World Observatory 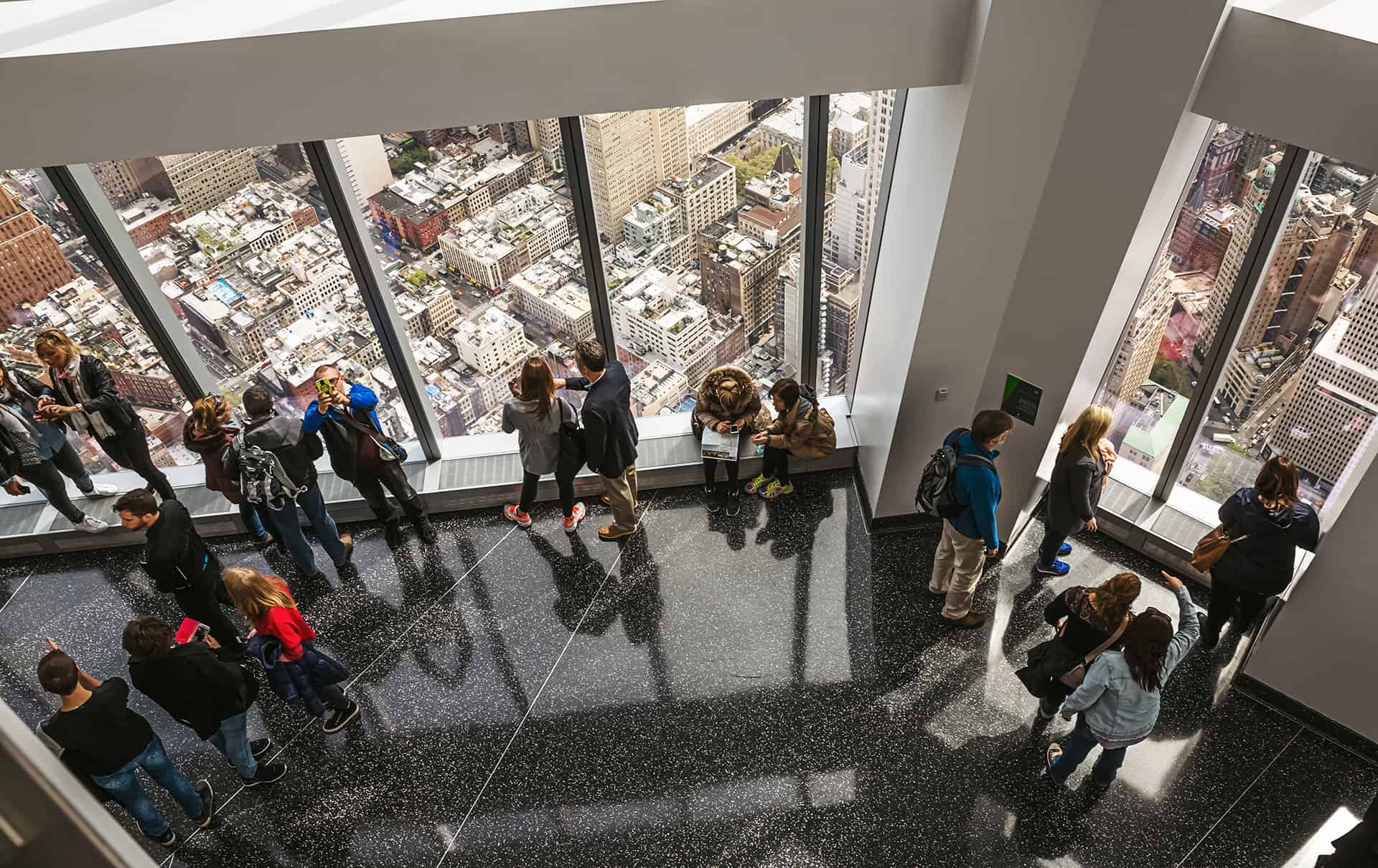 If you want to experience more of New York's stunning aerial views, you can also visit the One World Observatory, which opened in May 2015. This observatory is located on the 100th floor of the One World Trade Center tower, which stands on the site of the Twin Towers, in the centre of Manhattan's Financial District.

This observatory is only indoors, and although in my opinion the view is not as incredible as the one from the Top of the Rock or the Empire State Building, you will still be able to admire a very nice view of Manhattan looking north. Again, the best time to enjoy the view would be at sunset.

More details on the different tickets available by clicking here. Will you dare to walk on the glass floor? 😉