ALL ABOUT ST. PATRICK'S CATHEDRAL IN NEW YORK

In the heart of Manhattan, in the Midtown district, you can discover one of the most important religious buildings in the United States: Saint Patrick's Cathedral. This sublime neo-gothic church is one of the must-see monuments during a trip to New York.

In this short guide, I propose to learn a little more about the history of this emblematic place of worship and to discover everything you need to know to organise your  visit to Saint Patrick's Cathedral in New York.

The history of St. Patrick’s Cathedral 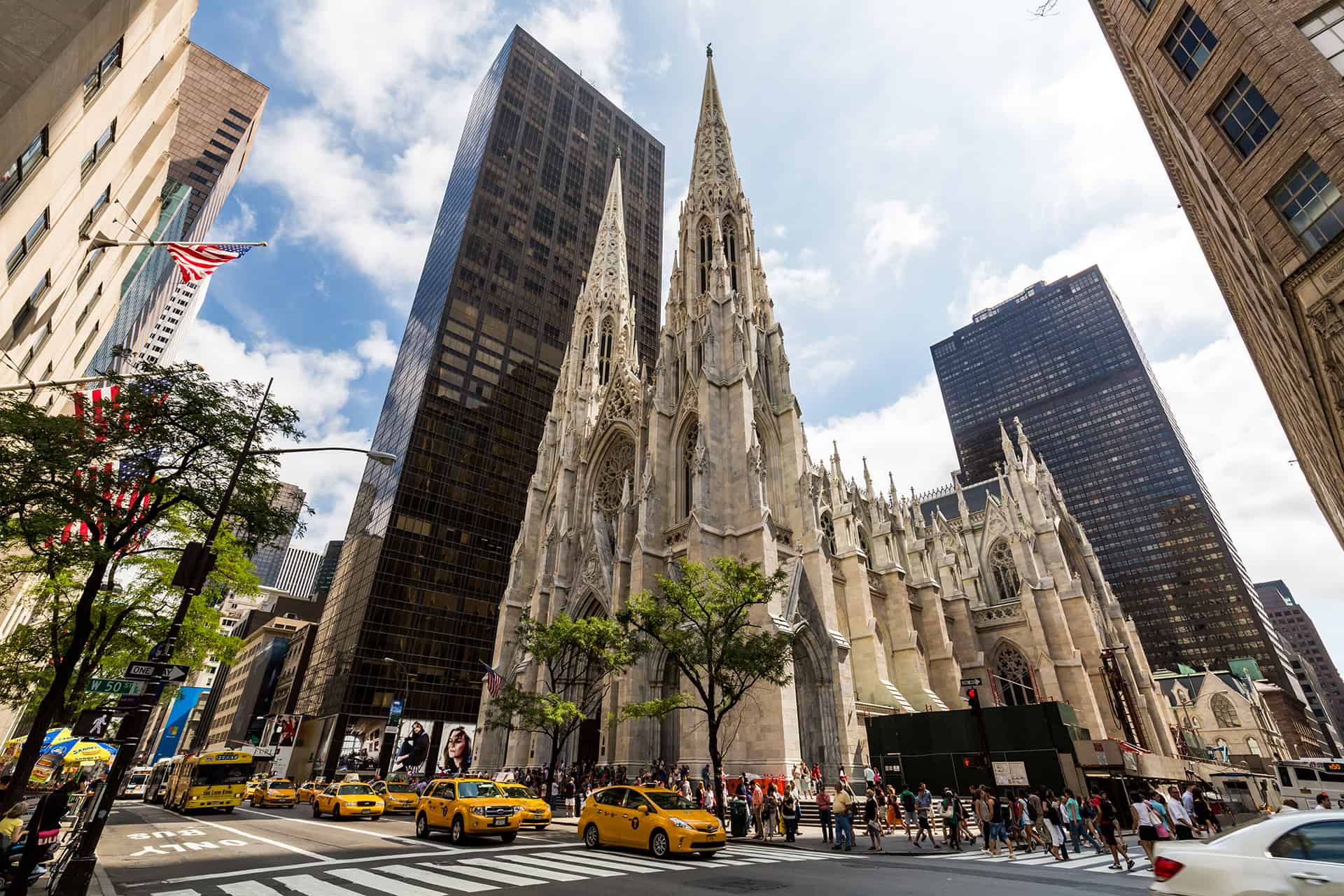 In 1808, the Diocese of New York was founded. Two years later, land was purchased for a Jesuit Catholic school, but the project was eventually abandoned. In 1850, Pope Pius IX transformed the diocese into the Archdiocese of New York, and Archbishop John Joseph Hughes decided that it was time to begin construction of a new place of worship on the land.

St. Patrick's Cathedral was built from 1853 to 1878, replacing St. Patrick's Church. The marble used to build this cathedral came from Tuckahoe, a village in Westchester County, just north of New York City.

The cathedral was named after St. Patrick, the patron saint of Ireland, in honour of the large number of Irish immigrants who settled in New York City during the 19th century.

At that time, the Midtown area we know today was not yet a densely populated area, but Archbishop Hughes already sensed that this district would become the heart of New York.

In the following years, other buildings were added to this neo-Gothic style building, such as the towers on the west façade, with their two spires rising to a height of 100 metres, which at the time made the cathedral the tallest building in New York, before many skyscrapers came to surpass it.

The Lady Chapel, whose stained glass windows are now one of the great attractions of this cathedral, was also built at this time.

Later, during the first half of the 20th century, renovation works were launched, and for the occasion, the choir of St. Patrick's Cathedral was enlarged and large organs were added.

Since the second half of the 20th century, great events have taken place in this cathedral. It was here that the funerals of great personalities such as baseball legend Babe Ruth, Cuban singer Celia Cruz and Robert F. Kennedy (JFK's brother and presidential candidate), took place.

Today, this religious building of 123 metres long and 84 metres wide is one of the most famous and most visited monuments in the Big Apple, along with other sites and attractions located in Midtown and the rest of Manhattan. St. Patrick's Cathedral is the most important place of worship in New York City. Each year, approximately 5.5 million visitors come to the cathedral.

If you want to explore the interior of St. Patrick's Cathedral, the best option is to take a New York Pass. For example, with the New York Pass, which gives you access to over 100 attractions and tours, the audio tour of the Cathedral is included. You won't have to pay anything extra for the pass. And that will be the case for the other sites and places included in the pass 😉

You pay a certain amount depending on the number of days of use you want and you can then enjoy access to the different attractions.

Your budget will be under control from the very start and you will be able to enjoy as many attractions as you can do during your stay in the city!

MORE INFORMATION ON THE PASS BY CLICKING HERE

THE DISCOVERY OF THE CATHEDRAL

When I discovered St. Patrick's Cathedral, the first thing that struck me was the astonishing contrast between this superb 19th century neo-gothic temple in white marble and the imposing glass, concrete and steel buildings that surround it.

Usually, when one sees a cathedral, one is often surprised by their very large size. St. Patrick's Cathedral is indeed a very large church – to say it is the largest Roman Catholic church in the Americas would be an understatement.

Yet, it seems almost small when compared to the huge skyscrapers around it. Just across the street, the Comcast Building at Rockefeller Center, built in the 1930s, is more than two and a half times taller than it.

The cathedral's intricate architectural style, with its many carvings, rich shapes and two very slender spires, also stands in stark contrast to the much straighter, smoother lines of the tall modern buildings in Manhattan's central business district.

WHAT TO SEE IN SAINT PATRICK'S CATHEDRAL? 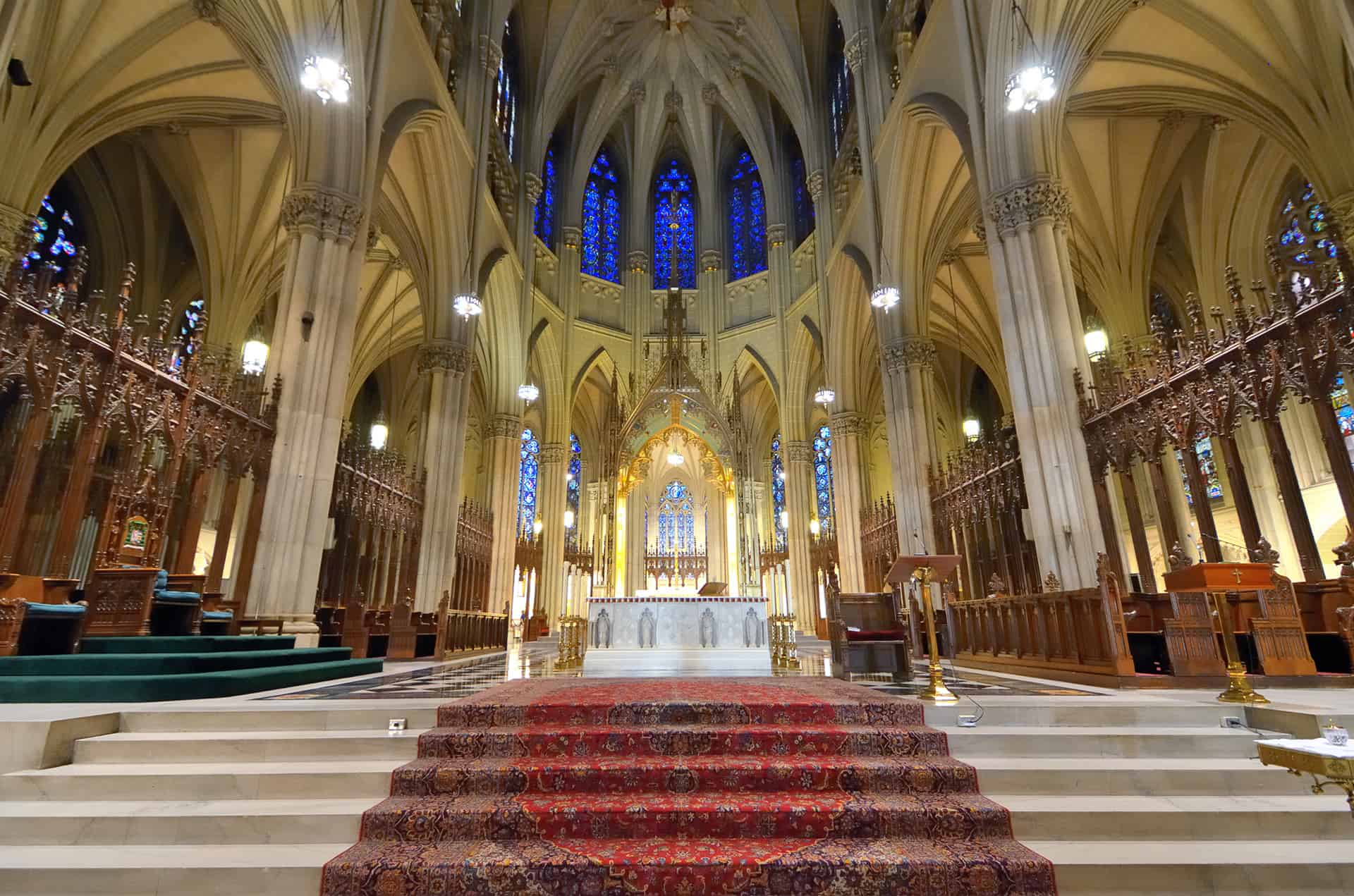 When you enter the cathedral, you will be impressed by the beauty of the place and by the imposing vaults which rise to 34 metres high. Saint Patrick's Cathedral in New York is very richly decorated, and you will be able to take your time to admire the magnificent stained glass windows made in France (in Chartres), as well as in Birmingham and Boston. There are over 3,700 stained glass windows in total that you can see inside Saint Patrick's Cathedral.

In the transept is an incredible replica of the Pietà, the marble statue of the Virgin Mary holding the crucified Christ in her arms, the original of which was made by Michelangelo and is located in St. Peter's Basilica in Rome at the Vatican. This replica by William Ordway Partridge is three times larger than the original statue.

At the back of the cathedral, you can also see a large bust of Pope John Paul II, which commemorates his visit to New York in 1979. In the centre of the chancel is a beautiful stone altar and a bronze canopy with amazingly fine decorations.

If you turn around, you will discover the great organs as well as a large rose window of eight metres in diameter, that overhang the entrance.

In total, there are 21 altars and 19 bells in New York’s St. Patrick's Cathedral. They are all named after a saint.

Saint Patrick's Cathedral welcomes all visitors year-round from 6:30 am to 8:45 pm 7 days a week, including Saturday and Sunday.

The souvenir stores in front of the entrance to the Cathedral and inside are open every day, even on weekends, from 9:00 am to 6:00 pm. 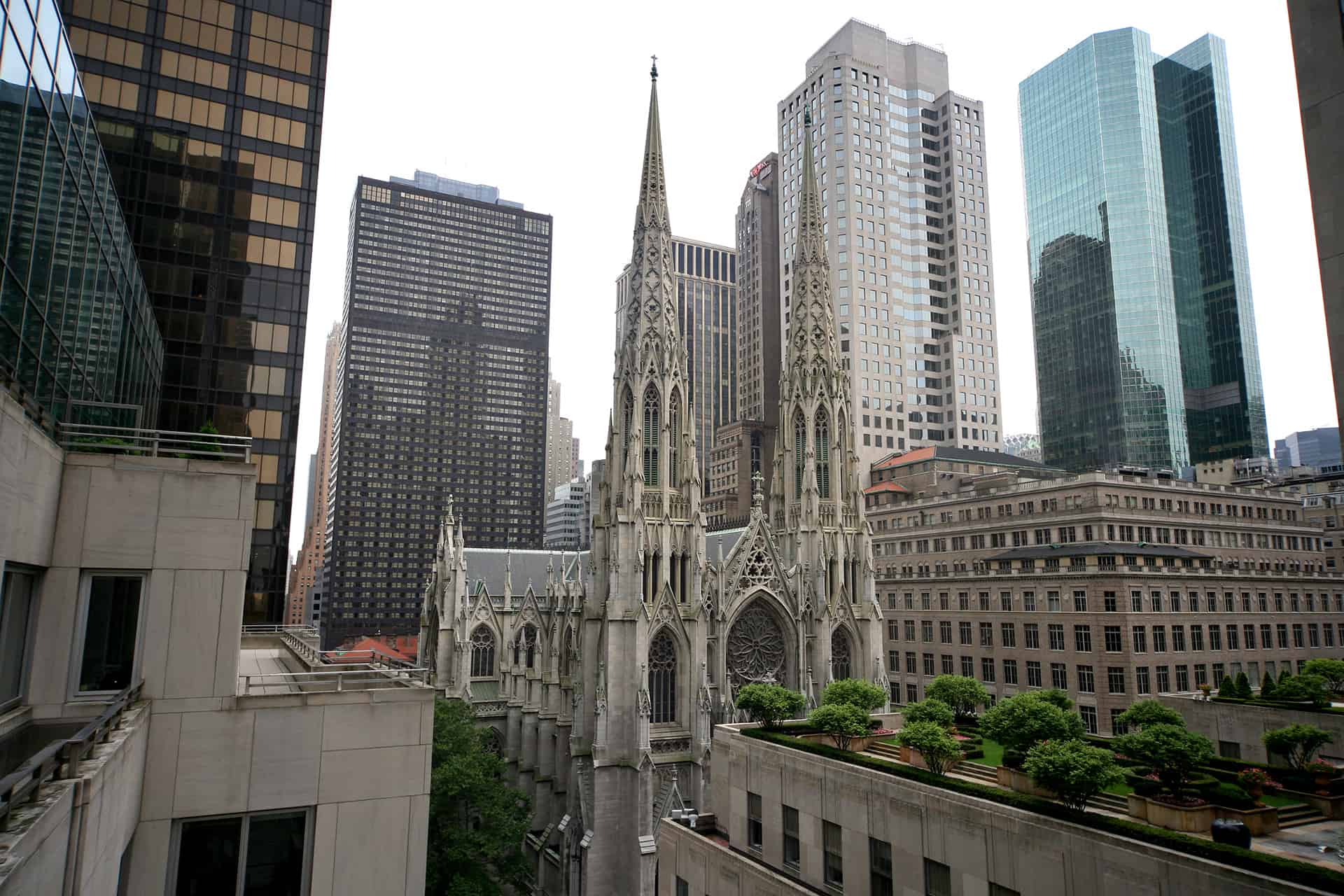 During the opening hours, you can visit the cathedral freely and for free without needing a ticket.

You can also discover the cathedral in more depth during a self-guided tour with an audioguide. You will be able to visit the building at your own pace, admire the incredible architecture of the place and learn a lot about the history of the cathedral. Cardinal Timothy Dolan, Archbishop of New York since 2009, told some of the stories you'll hear on this audio guide, which is available in English, French, Spanish, Italian and Portuguese.

This guided tour of St. Patrick's Cathedral lasts approximately 1 hour. It will give you a no-queue access.

This guided tour of St. Patrick's Cathedral lasts approximately 1 hour. It will give you a no-queue access.

MORE DETAILS ON THE SELF-GUIDED TOUR BY CLICKING HERE

If you are planning to see a lot of different attractions during your stay in New York, you might be interested in some tourist passes. The New York Pass is a tourist ticket that offers access to over 100 attractions and tours in New York.

This pass is valid for 1 to 10 days, and will allow you to visit tourist sites such as the Empire State Building, the 9/11 Memorial and Museum, the MET, the MoMa... And, of course, the visit of St. Patrick's Cathedral with the audio guide.

The New York Pass is a very good way to save time with the no-queue access, while saving money on many visits.

It is the best compromise if you really intend to visit the Cathedral, because if you use the pass for different activities during your stay, you will quickly realise at the end that the prices for the different attractions will be much cheaper than if you had taken each entrance separately. It will therefore be possible for you to visit a multitude of sites and places during your stay, all at a controlled and reasonable cost 😉

TO KNOW MORE ABOUT THE NEW YORK PASS, CLICK HERE

HOW TO GET TO THE CATHEDRAL?

St. Patrick's Cathedral is located at the corner of Fifth Avenue and 50th Street, just steps away from the Rockefeller Center.

Since it is located in the heart of the Midtown business district – one of the best served areas of NYC – you will have no trouble getting there.

You can also get there by bus (there are a great many lines), by getting off at 5th Avenue.

St. Patrick's Cathedral is one of the most central landmarks in New York City. It is less than 200 metres from the Rockefeller Center, less than 300 metres from the MoMA , less than a 10 minutes’ walk from Times Square and not far from Central Park. You can also get there with tourist buses like the Hop On Hop Off bus. This bus serves more than 40 stops in New York, and the ticket for its unlimited use is included in some tourist passes, such as the New York Pass.